Bombers hoping to lock up playoff position against Ticats 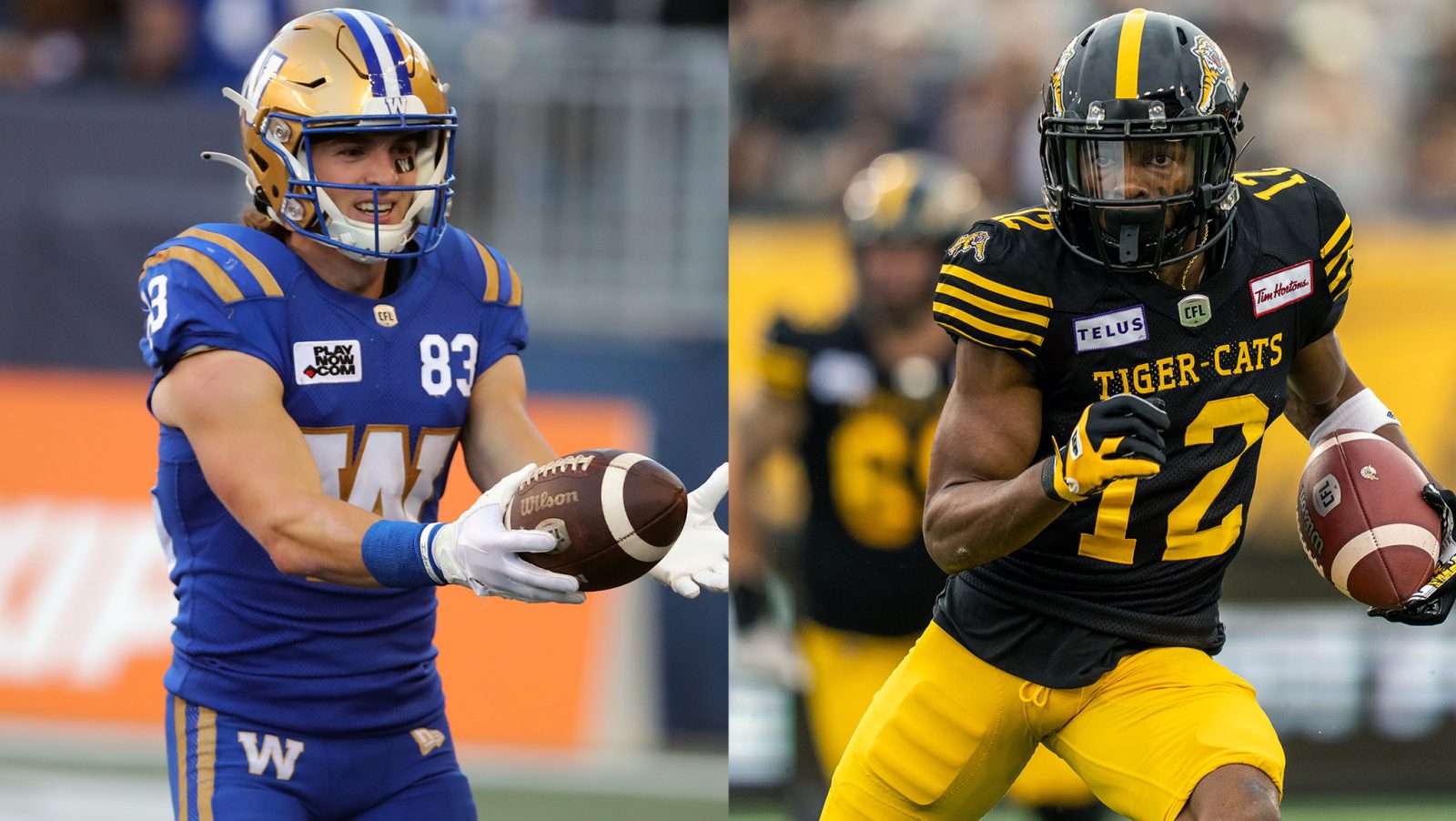 Bombers hoping to lock up playoff position against Ticats

HAMILTON — The Winnipeg Blue Bombers will make their return to Hamilton for the first time since the 108th Grey Cup, as they get set for a Week 15 matchup with the Hamilton Tiger-Cats.

Ahead Saturday afternoon’s action with the Ticats, the Bombers have a chance to clinch a home playoff game. With a win over Hamilton and a loss from the Calgary Stampeders on Saturday, Winnipeg would claim homefield advantage to begin the playoffs.

The two Grey Cup rivals have met once previously this season, a Week 3 matchup which saw the Bombers take a 26-12 win over the Ticats at IG Field. In Week 15 the Ticats look to settle the score from Tim Hortons Field.

The Bombers offence exploded in their 54-20 win over the Saskatchewan Roughriders in Week 14. All three of the Winnipeg quarterbacks played a role in helping their team earn a win.

Zach Collaros completed 83.3 per cent of his passes as he threw for 273 yards and four touchdowns. Dru Brown completed his first career touchdown pass and Dakota Prukop rushed for a touchdown as he muscled his way into the end zone on a quarterback sneak. It was a detailed demonstration of just how diverse the Bombers offence can be, something Hamilton will need to be prepared for.

There will be no time for the Ticats secondary to take plays off, the Bombers have shown their ability to attack at multiple levels of the passing game. Dalton Schoen, Nic Demski and Rasheed Bailey have been critical pieces in leading the Bombers receiving corps, the trio have combined for 1,744 of Winnipeg’s 3,308 passing yards so far this season and of their 20 of the team’s 28 receiving touchdowns.

With his next touchdown reception Schoen will become Winnipeg’s all-time leader in receiving touchdowns by a first-year player. However, he will need seven more to tie David Williams’ league-record of 18, which he set with the BC Lions in 1988.

The offence isn’t the only phase of the game where the Bombers have been dominant this season. The Winnipeg defence boasts one of the most respected pass-rushes in the league, headlined by defensive lineman Willie Jefferson. The Bombers defensive front recorded four sacks, had interception and forced a fumble against the Riders in Week 14. Jefferson had two of those sacks and forced fumble.

Facing a team that has thrown a league worst 27 interceptions and allowed 28 sacks, the Bombers will look to take advantage of the opportunities they are able to create on the defensive side of the football.

Winnipeg defensive back Brandon Alexander will also make his return to the Bombers secondary following an injury he sustained in last year’s Grey Cup. Alexander had two interceptions, forced a fumble and recorded 36 defensive tackles during the Bombers championship run in 2021.

Speaking to team media ahead of Saturday’s matchup from Tim Horton’s Field, Winnipeg head coach Mike O’Shea admits that going back to Hamilton may bring back some great memories from a year ago and he encourages his team to relish the moment and absorb the energy.

“It’s human, yeah absolutely” O’Shea told BlueBombers.com. “Lots of guys are going to have fond memories. Whether it’s on the field regarding a certain play or if it’s just being around their guys, you don’t stifle those memories by any means.” 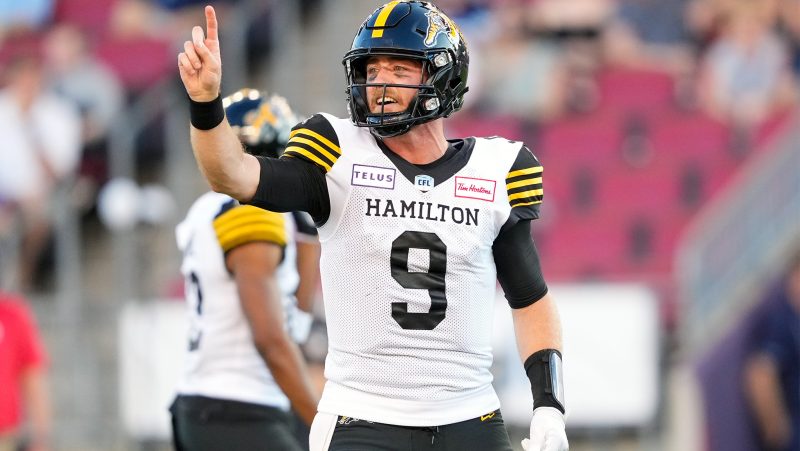 Hamilton quarterback Dane Evans ranks sixth in total passing yards amongst all CFL quarterbacks with 2.473, despite having only played in nine games this season (Kevin Sousa/CFL.ca).

In Hamilton, Dane Evans will resume his spot centre for the Tabbies, making his first start since Week 12 of the season. In nine appearances this season, Evans has thrown for 2,473 yards and 10 touchdowns and is hoping to help his team snap a three-game losing streak.

Tim White leads the Ticats receiving corps with 815 yards and leads all CFL receivers with 66 receptions this season. Steven Dunbar Jr. who has accumulated 748 yards this season. The pair of receivers have each scored five touchdowns, tying for the team lead and will look to provide Evans with a set of steady hands as he returns to the lineup.

No East Division team has surrendered more points than the Ticats defence, but that doesn’t mean their roster lacks the type of  players that can make a difference in the game. Defensive back Kameron Kelly is tied for third most interceptions in the league with four. Fellow defensive back Tunde Adeleke is enjoying a fine season of his own, recording two interceptions of his own, while adding two sacks and 44 tackles.

Kelly knows the task at hand is a tough, but expects his team to be up to the challenge.

“We’re excited for this week,” the defensive back told Ticats.ca. “Whoever we would have to play coming out of the by week, we’d be ready to get back at it. With them having a good record and being one of the top teams in the league right now, we’re definitely excited to be able to play them.”

The Tabbies have also been very good against the run, giving up an average of 76.5 yards per game. It’s an important stat to keep an eye on against Winnipeg running back Brady Oliveira.

The young Winnipeg back’s role has been increasing nearly every game for the Bombers, having averaged a combined 11-plays called per game and one touchdown for Oliveira over the last five weeks of action.

Hamilton will be tasked with stopping a tough Winnipeg team and will be forced to do so without defensive lineman Julian Howsare. According to the team’s injury report, Howsare has be ruled out for Week 15 with an achilles injury.

Ticats’ head coach Orlondo Steinauer placed importance on being prepared for all three phases of the game against Winnipeg. Knowing that the Bombers have not needed to hold a lead in order to earn a win.

“They’ve won all different ways,” Steinauer told Ticats.ca. “They’ve come from behind, they’ve done it at home, they’ve done it on the road, they responded from a loss. They’re champions, so you add on top of that the mental perspective. The challenges are the same ones that everyone has faced. There should be no level of comfort regardless of if you’re up or down. It’s about the play that’s in front of you.”

Winnipeg is in search of their eighth straight road win of the season. With a win over Winnipeg, Hamilton can gain ground on the Montreal Alouettes, who are ahead of Hamilton by four points and are one of two East Division teams on a bye this week.

Kickoff is scheduled for 4:00 p.m. ET and the game can be seen on TSN, RDS, ESPN+ and can be followed on CFL.ca’s game tracker.

– With files from BlueBombers.com and Ticats.ca