Elks, Riders looking to bounce back in series finale 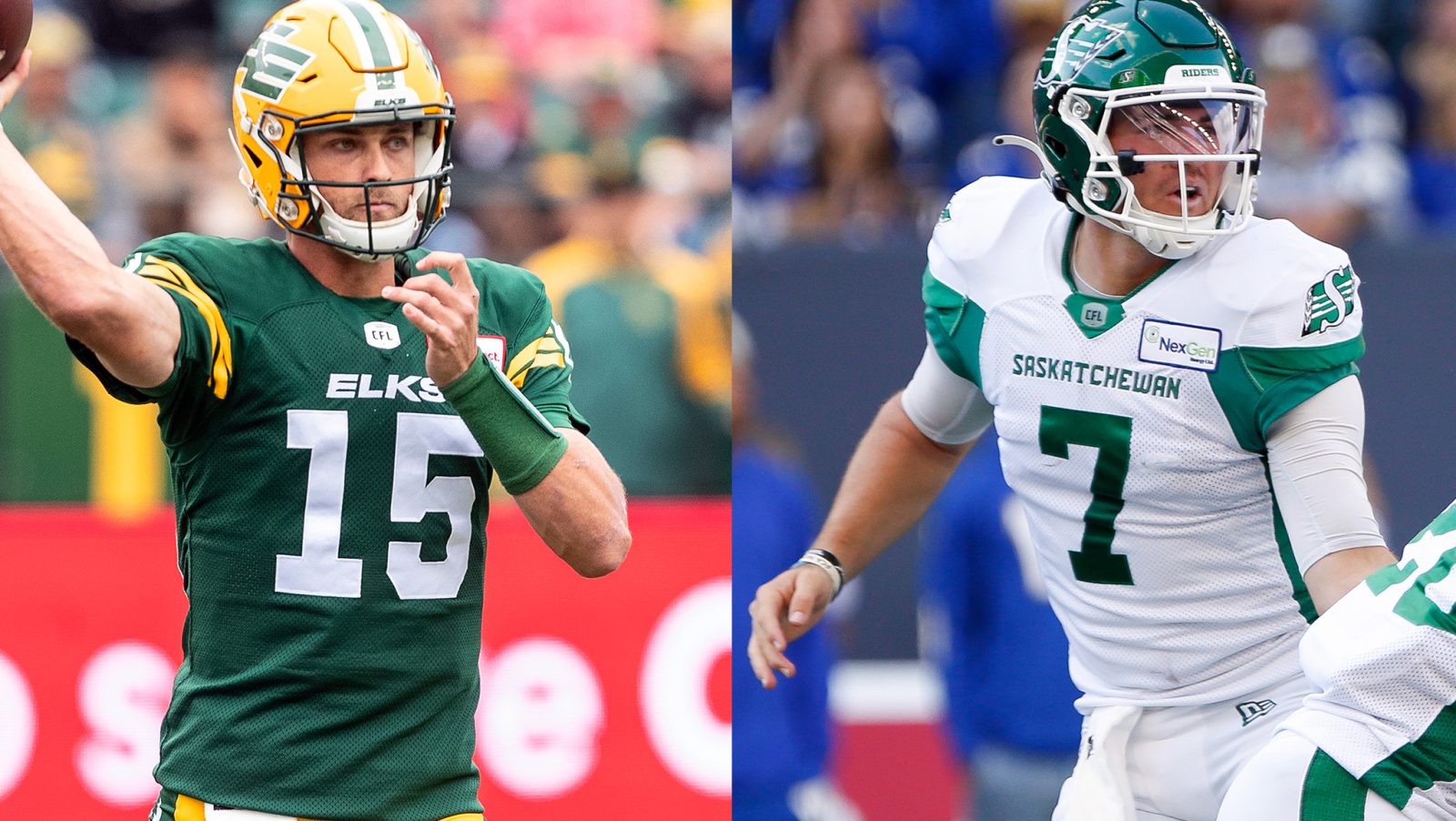 Elks, Riders looking to bounce back in series finale

REGINA — The Edmonton Elks and the Saskatchewan Roughriders will kickoff Week 15 with a Friday Night Football matchup from Mosaic Stadium.

Both the Elks and the Riders are looking to try and rebound from Week 14 losses and earn crucial points as the race for playoff seeding continues to sort itself out.

In the season series between the West Division opponents, Saskatchewan has taken wins in both meetings against Edmonton, beating the Elks in Week 2 and Week 10.

Despite the ball not bouncing their way through the first two meetings, the Elks have seemingly found a quarterback their confident in for the future. In the week leading up to their matchup with the Riders, the Elks announced that they had signed quarterback Taylor Cornelius to a contract extension that will keep him in the Green and Gold through 2024.

Since taking over as the team’s starting quarterback in Week 6, Cornelius has completed 147 of his 251 passing attempts for 1,936 yards and eight touchdown passes. The Edmonton pivot has also shown his ability to make plays from outside of the pocket rushing for 291 yards and five touchdowns this season.

The play of Cornelius is certainly and encouraging sign for the Elks and their fans, however they are coming off a loss to the Calgary Stampeders in Week 14, and have yet to earn a win against a West Division opponent this season.

Elks rookie Dillon Mitchell, like his quarterback, has been another bright spot for the Edmonton offence as of late. In his last two games against the Elks receiver has caught 11 passes for 199 yards and two touchdowns.

Mitchell has also contributed on special teams racking up 118 return yards. In a team media sessions he said that his goal is wants to continue improving every week and become a valuable member of the Elks receiving corps.

“I keep saying every week, I want to keep making plays and I want to keep building the energy,” Mitchell told GoElks.com. “Everyone knows that I’m trying to make something happen for the team. It’s just coming out here and putting the work in. I want to play at a higher level.”

Without the likes of star receivers Kenny Lawler and Emmanuel Arceneaux, who both remain on the six-game injured list, Cornelius has been forced to spread the ball around. Against Calgary he connected with nine different receivers for at least one reception, utilizing all of his available playmakers is something Cornelius will again look to do against the Riders on Saturday.

Receiver isn’t the only position where the Elks have young players making an impact for their roster.

Despite being listed as the No.2 running back behind Ante Milanovic-Litre on the team’s depth chart for this week, rookie Kevin Brown has been making an impact for the Elks offence in his first two games of CFL action.

The first year back has shown a source of reliability and the ability to convert yardage into first downs when needed. The young back has carried the ball 15 times over his first two games, rushing for 136 yards while contributing 66 yards on 10 receptions out of the backfield.

For an offence that is short handed at receiver and has averaged just 86.4 rushing yards per game, the versatile ability of Brown could become increasingly important as the season continues. 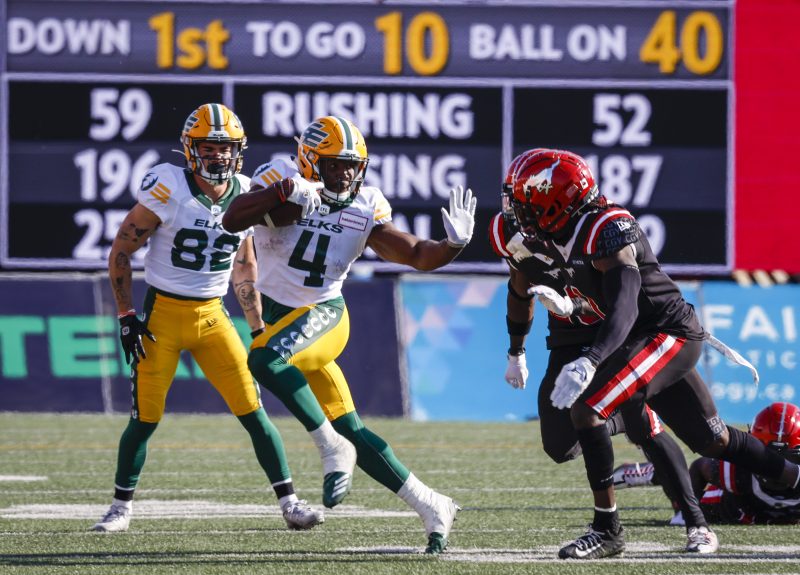 Edmonton Elks running back Kevin Brown has rushed for 136 yards and has averaged 9.0 yards per carry in his first two starts in the CFL (The Canadian Press).

However, in order for Cornelius to create plays for his offence, he needs time to manipulate the defence and work through his downfield progressions. The Elks have allowed 42 sacks this season and will need to keep Cornelius clean on Friday against a Rider defence that boasts a league-leading 36 sacks.

With their own defensive efforts the Elks will be expecting a better performance than the one which saw them allow over 50 points in Week 14. Despite allowing a league high 433 points this season, Edmonton has been strong against opposing passing attacks, allowing 258.6 yards per contest, the second lowest average in the league.

If the Elks can generate pressure on the Saskatchewan offensive line, their secondary will have an opportunity to force turnovers when the ball goes in the air.

Limiting Cody Fajardo’s time to maneuver in the pocket will be critical to Edmonton’s success on Friday and defensive lineman Jake Ceresna will be tasked with leading the Edmonton pass rush. Ceresna leads the team with six sacks, and will looked to disrupt a Riders offensive line that has given up a league worst 51 sacks this season.

Fajardo is coming off a game against Winnipeg which saw him complete 15 of his 18 attempts for 124 yards, while adding a rushing touchdown in the game.

Riders head coach Craig Dickenson spoke to team media about the evolution of his team’s offensive mindset, something they want to continue to develop each week.

In the ground game for the Riders the combination of Fajardo and Frankie Hickson have helped the ease the loss of Jamal Morrow to injury. Even without their star back, the Riders still lead the league with 1,410 rushing yards and average a second-best 5.4 yards per carry.

Fajardo has called his own number 59 times for 237 rushing yards, while Hickson is averaging 6.9 yards per carry and has rushed for at least 70 yards in his last three starts.

Speed will also be a factor in the return game, as receiver/returner Mario Alford returned five kickoffs for 153 yards against the Bombers, including a 92-yard kickoff return touchdown to open the second half of play. Alford’s ability to flip the field with big-returns plays, the Riders lead the league in average yards per kickoff return and return touchdowns.

As the Elks and Riders get set to kickoff from Mosaic Stadium on Friday night in Regina, the game is scheduled for 9:30p.m. ET and can be seen on TSN, ESPN+ and followed on CFL.ca’s game tracker.