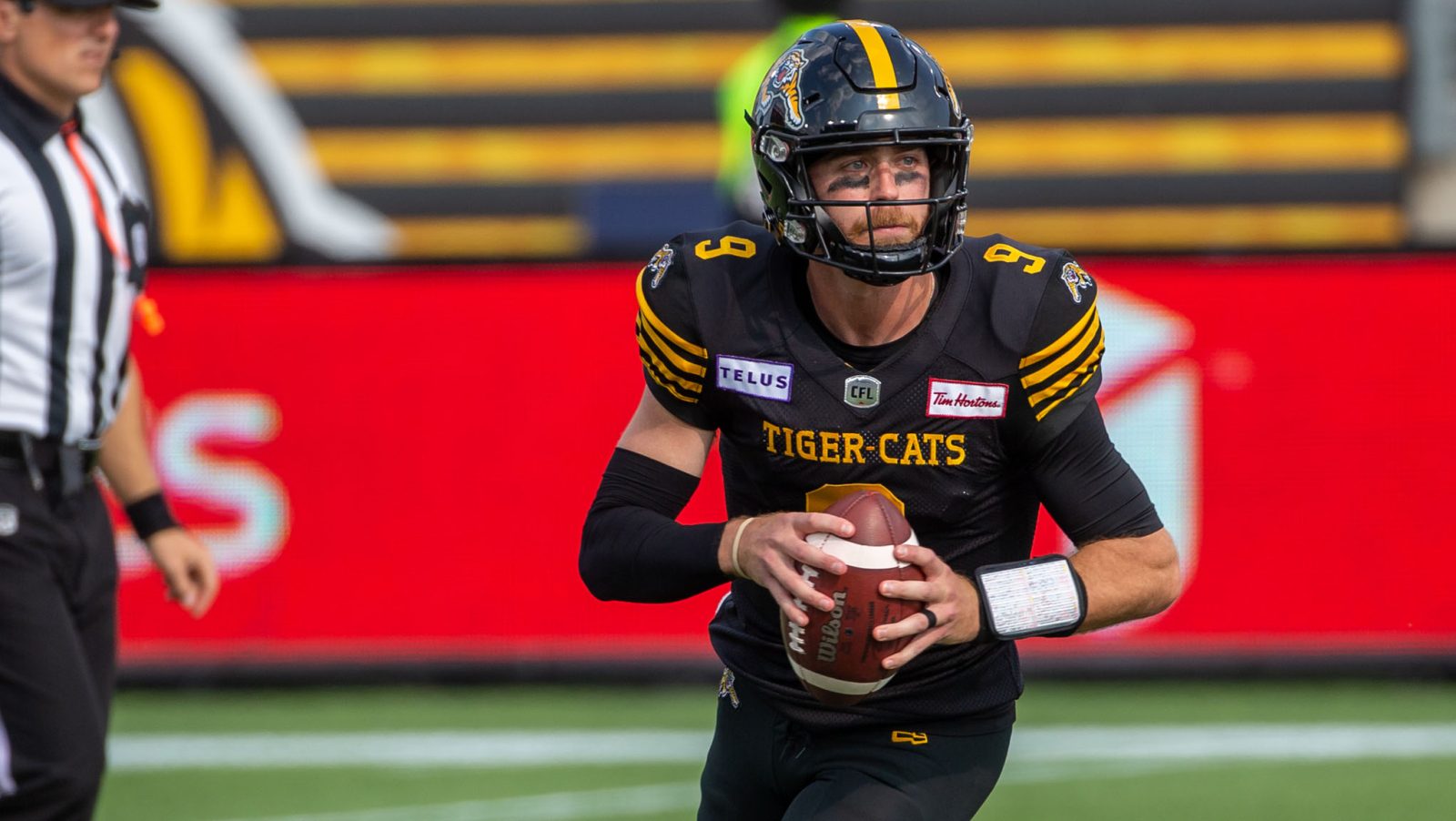 My favourite image from this past week of action was the celebrations going on the Hamilton Tiger-Cats sidelines between Dane Evans and a variety of players and coaches after Evans’ fifth touchdown pass of the game.

That touchdown, a career-high for Evans, not only sealed Hamilton’s victory over the Winnipeg Blue Bombers, but it also felt like a massive weight had been lifted off Dane’s shoulders. Dane has been very open about talking with sports psychiatrist’s this season to help him play through what has been a difficult season. During Saturday’s broadcast, TSN reporter Matthew Scianitti spoke about Dane spending time with Dr. Carla Edwards to work on his mental approach of the game.

On a side note, it is such a positive that Hamilton’s starting quarterback was so open about a topic that used to be considered taboo but should be seen no different than visiting any other coach on the team. I’m not here to tell you how to feel about issues of mental health, but I think we would all be in a better place if we viewed seeking out help/advice from a psychiatrist the same way we would a strength and conditioning coach.

There could not be a bigger contrast between the emotions going through Evans at the end of Hamilton’s eye-opening 48-31 victory over Winnipeg on Saturday versus what he must have been feeling at the end of their Week 12, 37-20 loss to Toronto. Toronto won on the strength of three Jamal Peters interceptions, the third of which he returned for a decisive 67-yard touchdown. Soon after, you could see shots of Evans alone on the sidelines, a portrait of frustration.

For most of us it can be easy to shake off a bad day of work. Hey, it happens, we make a mistake but get to move on. But imagine being a professional football player where so much of your identity is wrapped up in your job. Then imagine you go from a quarterback who led his team to a Grey Cup to one whose play is costing his team games. I cannot imagine that level of exasperation a player must feel when they go from being an asset to the overall team goals to a liability. No one cares about a passer dealing with shoulder injuries, in the end it is about did you team win or lose? Those struggles are magnified to a far higher level when it is the one position that gets far too much credit and scorn; the quarterback.

That is why it was great to see the 2019 version of Evans on the field. He had accounted for just four passing touchdowns in his last four games as a starter but on this gorgeous afternoon he delivered five against the defending Grey Cup champs. You could see a different version of Evans on the team’s second drive of the game. There was a cleverly designed play where Felix Garand-Gauthier got lost in all the traffic, was wide open and Evans hit him in stride for a 44-yard gain. Moments later Evans tossed a strike to Tim White for an eight-yard touchdown, as the pass was just out of the reach of Donald Rutledge Jr.

The major theme of the broadcast was just how decisive Dane was with his decisions. This was the most confident version of Evans I’ve seen all year and it showed on his second touchdown pass of the game, a quick read corner throw to Steven Dunbar Jr. His hat trick touchdown made me feel old as he found Kiondre Smith (the son of former Toronto Argonauts great Adrion Smith) wide open 42 yards downfield and suddenly Hamilton was up 34-14 near the end of the half.

Let’s flash forward to the most important drive of the Hamilton Tiger-Cats’ 2022 season. Winnipeg had cut the lead to 41-31 and following an underwhelming kickoff return, all of the momentum was favouring Winnipeg. The game felt like it would end with yet another heroic comeback for Zach Collaros and company.

What I loved about this drive was that it was a total team effort. The drive started with three-straight runs for 26 yards while the biggest play yardage wise was a 21-yarder to Papi White. The one constant on all these plays was just how dominant the Tiger-Cats offensive line was. This group deserves so much credit for the career day by Evans who had all day to survey the field. Then came the unexpected moment; Evans converting a second and nine with his legs! His instincts kicked in on this one as he sensed the pocked breaking down and spotted a massive hole opening up in the middle of the field as he somehow cut up field and stretched past Adam Bighill for the first down.

The sneaky big moment officially goes down as a ho-hum four-yard run by Sean Thomas-Erlington but in reality, this play was a near disaster due to a high snap, but Evans collected the ball and found a way to get the ball to his running back. This 14-play, 90-yard masterpiece of a drive ended with David Ungerer III fighting through excellent coverage by Evan Holm for that last touchdown giving the Tabbies a 48-31 lead. Moments later there was nothing but joy on the Hamilton sidelines as everyone was celebrating the work done by Hamilton’s offence and the career game from Dane Evans.

On a personal level I was thrilled the Tiger-Cats won as I picked them to upset Winnipeg and from a social media perspective there is nothing more harrowing then picking against the Bombers. The final score made for a fun Sunday for myself on the old Twitter machine. But on a far bigger, more important picture, this breakout game for Hamilton suddenly makes the East Division that much more interesting.

If this was indeed the breakout moment for Evans, then we no longer can assume Toronto is coming out of the East. The Tiger-Cats are the reigning East Division champs and performances like this are a reminder why they have been the best team East of Winnipeg.