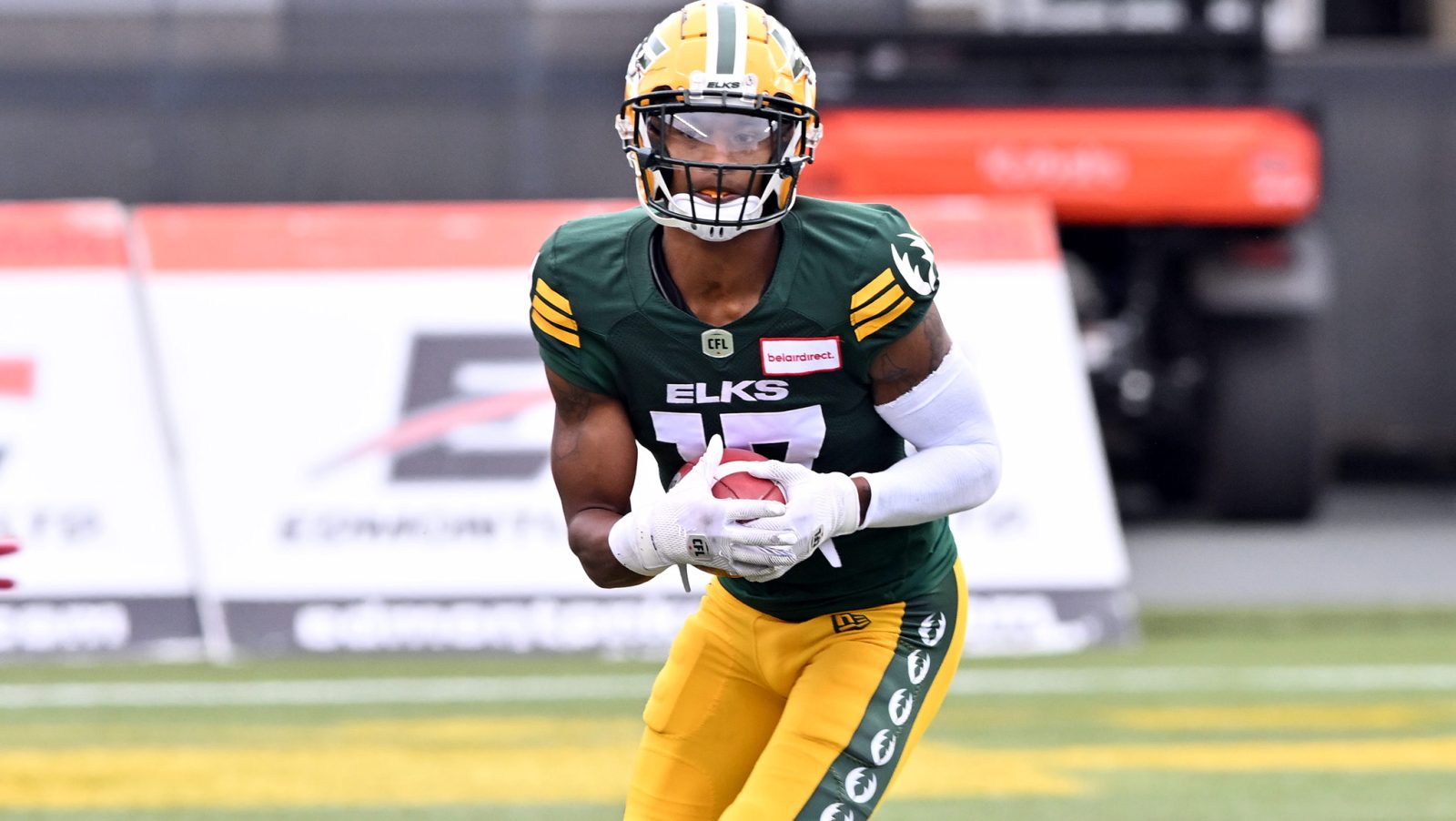 TORONTO — Week 16 of CFL action is just on the horizon and while it is another three-game week on the schedule, that doesn’t mean there is any shortage of excitement ahead of a new week. If Week 15 was any indication of what might be in store for the current week, there should be plenty of storylines to look forward too.

The new week provides two rematches as the BC Lions and Calgary Stampeders are set to square off in a rematch of last week’s overtime thriller. While the Toronto Argonauts and Ottawa REDBLACKS will hit the reset button for a rematch of their Week 14 meeting in the nation’s capital.

CFL.ca is here as always to keep everything organized so that you don’t have too, this week’s edition of Checking Down brings you the latest news from around the league so fans can keep up with all of the excitement ahead of Friday’s kickoff from Montreal.

– Entering Week 16 of the CFL season, the Lions will host the Stampeders in a rematch of Week 15. In the latest update of the CFL Playoff scenarios, BC could clinch a playoff birth win a win on Saturday evening (CFL.ca).

– The Lions social media team brings you even closer to the action, in their latest All Access video. Going inside the locker room following BC’s overtime win from McMahon Stadium (BCLions.com).

– BC quarterback Vernon Adams Jr. made his first career start as a member of the Lions in Week 15. In a post-game media availability the quarterback said that he was grateful for the win and thankful for the opportunity (BCLions.com).

– In a team media session following the loss to BC in Week 15, Calgary Stampeders quarterback Jake Maier said that despite the loss he feels the Stamps showed that they can play with top teams and that they themselves are a top team (Stampeders.com).

– As the regular season enters it’s final stretch, Reggie Begelton told CFL.ca’s Jim Morris why he doesn’t mind being the team that chases the top spot instead of the team ebing chased (CFL.ca).

– Ahead of Saturday’s rematch with Lions, CFL.ca’s Brandon C. Williams helps you set your fantasy lineup and explains who to select at receiver and why it should be Calgary’s Begelton (CFL.ca).

– Following their 26-24 victory over the Saskatchewan Roughriders in Week 15 a pair of Edmonton Elks have been named as the week’s CFL Top Performers. Quarterback Taylor Cornelius and linebacker Matthew Thomas were each named to the list for the first time (CFL.ca).

– Edmonton head coach and general manager Chris Jones had high praise for his quarterback following their win over the Riders, likening Cornelius’s work ethic to that of CFL Hall of Fame quarterback Ricky Ray (GoElks.com). 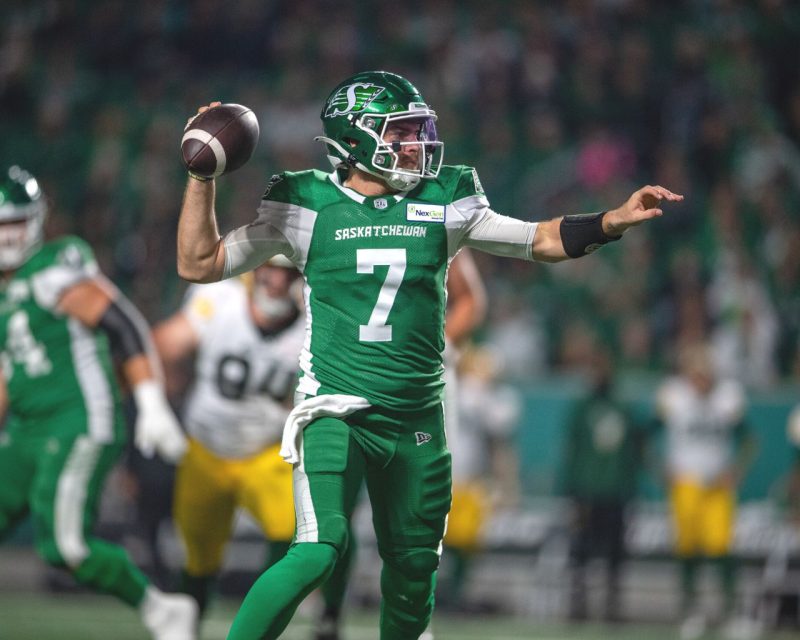 Saskatchewan Roughriders quarterback Cody Fajardo completed 74 per cent of his passes in Week 15, his second highest completion percentage of the 2022 season (The Canadian Press).

– Following the Week 15 loss to the Elks, Saskatchewan head coach Craig Dickenson was honest with the media post-game, saying he knows how quickly the season is coming to a close and acknowledged that time is running out for his team (Riderville.com).

– Despite having a bye in Week 16, a pair of Saskatchewan players were hard at work on Monday. Receiver Brayden Lenius and defensive lineman Anthony Lanier were serving coffee and smiles from a local Regina Tim Hortons to help kick off their annual Smile Cookie Campaign (CFL.ca).

– The Winnipeg Blue Bombers suffered just their second loss to the season in Week 15 against the Hamilton Tiger-Cats. In a post-game media session, Winnipeg head coach Mike O’Shea said he wasn’t surprised by the play of the Ticats and knew they were a good team (BlueBombers.com).

– Following the loss, linebacker Adam Bighill spoke to team media saying that he felt the loss was uncharacteristic and that the defence gave up some big-plays downfield that they normally wouldn’t (BlueBombers.com).

– Saturday’s Week 15 meeting with Hamilton marked the official return for Winnipeg defensive back Brandon Alexander after an injury has kept him on the sidelines. The Blue Bombers content team captured Alexander’s hard work and recovery process in his journey back to the field (BlueBombers.com).

– In the their 48-31 win over the Blue Bombers, quarterback Dane Evans had a career performance as he threw five touchdowns. CFL.ca’s Matthew Cauz explains how the win could be an enormous spark for the Tabbies (CFL.ca).

– In a team media availability session early in the week, Ticats head coach Orlondo Steinauer said that he was proud of the way his team played in Week 15 and felt it was an important win (Ticats.ca).

– As the battle for playoff positioning tightens in the East Division, find out what Hamilton’s playoff odds are in the latest edition of the CFL Simulation (CFL.ca). 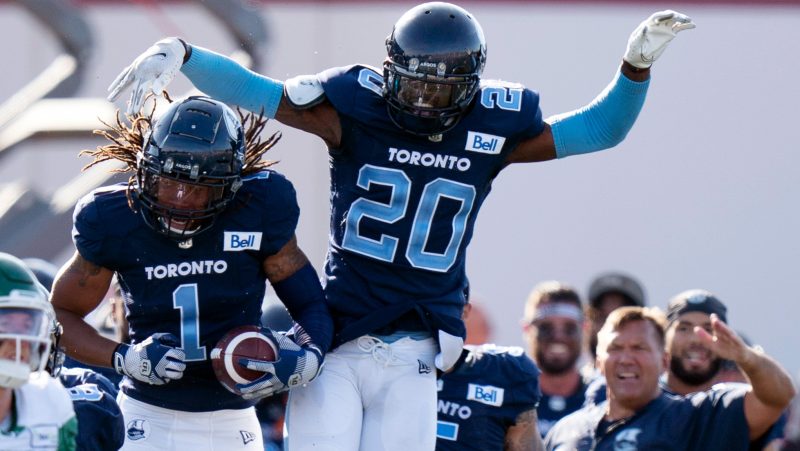 Toronto Argonauts rookie defensive back Tavarus McFadden is tied for the second most interceptions on the team with two this season (The Canadian Press).

– The Toronto Argonauts are back preparing for their Week 16 matchup with the Ottawa REDBLACKS after a bye week. Argonauts defensive back Tavarus McFadden sat down with Argonauts.ca’s Mike Hogan to tell him about his stay at a haunted hotel during the team’s week off (Argonauts.ca).

– As the Boatmen prepare for a Week 16 rematch with the REDBLACKS in the nation’s capital, see who CFL.ca’s Jamie Nye is placing his confidence in this week’s edition of Weekly Predictor (CFL.ca).

– With a new week of CFL Fantasy on the horizon, this week’s Start vs. Sit outlines why you should feel more than confident in starting Argos quarterback, McLeod Bethel-Thompson ahead of Saturday’s contest (CFL.ca). 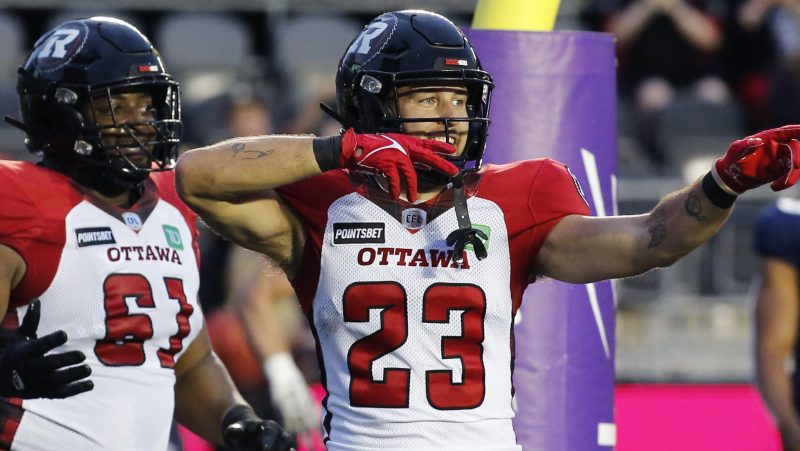 Ottawa REDBLACKS receiver Jaelon Acklin leads the team with eight catches of 30-yards or more, and has a season-long of 64-yards (Patrick Doyle/CFL.ca).

– After a Week 15 bye, the Ottawa REDBLACKS return to the field on Saturday evening for a Week 16 rematch with the Argonauts from TD Place. The matchup against the provincial rivals will be a super hero theme night and fans are encouraged to dress up as their favourite super hero (OttawaREDBLACKS.com).

– REDBLACKS receiver Jaelon Acklin became the first receiver to break the 1,000 yard mark this season. In an interview with team media Acklin said that this season he has been trying to emulate the work ethic of teammate Jeremiah Masoli (OttawaREDBLACKS.com).

– The playoff battle in the East Division seemingly becomes closer with each week, find out what Ottawa’s playoff odds are in the latest edition of the CFL Simulation (CFL.ca). 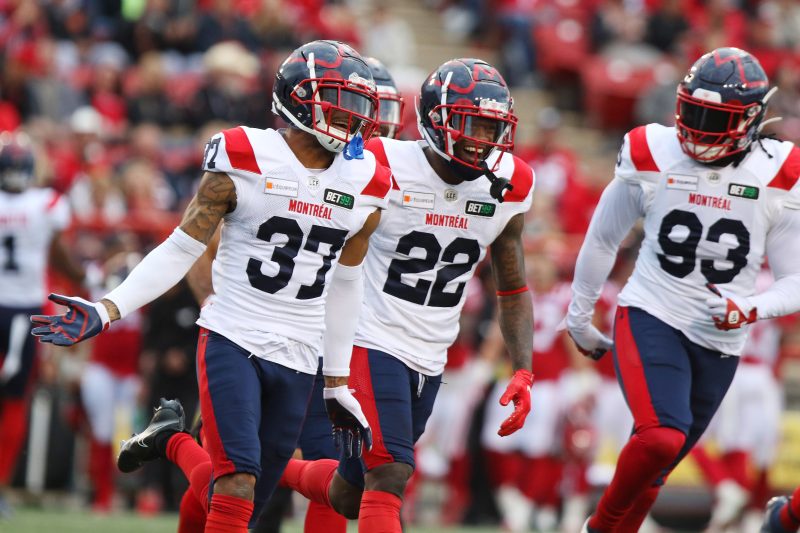 The Montreal Alouettes defence has allowed the second lowest total passing yardage through the first 15 weeks of play (The Canadian Press).

– Friday’s action from La Belle Province will see the Montreal Alouettes take on the Ticats in an East Division battle. The Friday Night Football action will also see Percival Molson Stadium host their Oktoberfest night at the stadium (MontrealAlouettes.com).

– Alouttes great, Kyries Hebert announced on Wednesday that he would be signing a one-day contract with the team so that he could officially retire from professional football as a member of the Als (CFL.ca).

– In an interview earlier this week with team media, Montreal defensive back Micah Awe described how he used the year off in 2020 to learn code and build his own app, which he designed specifically with athletes in mind (MontrealAlouettes.com).