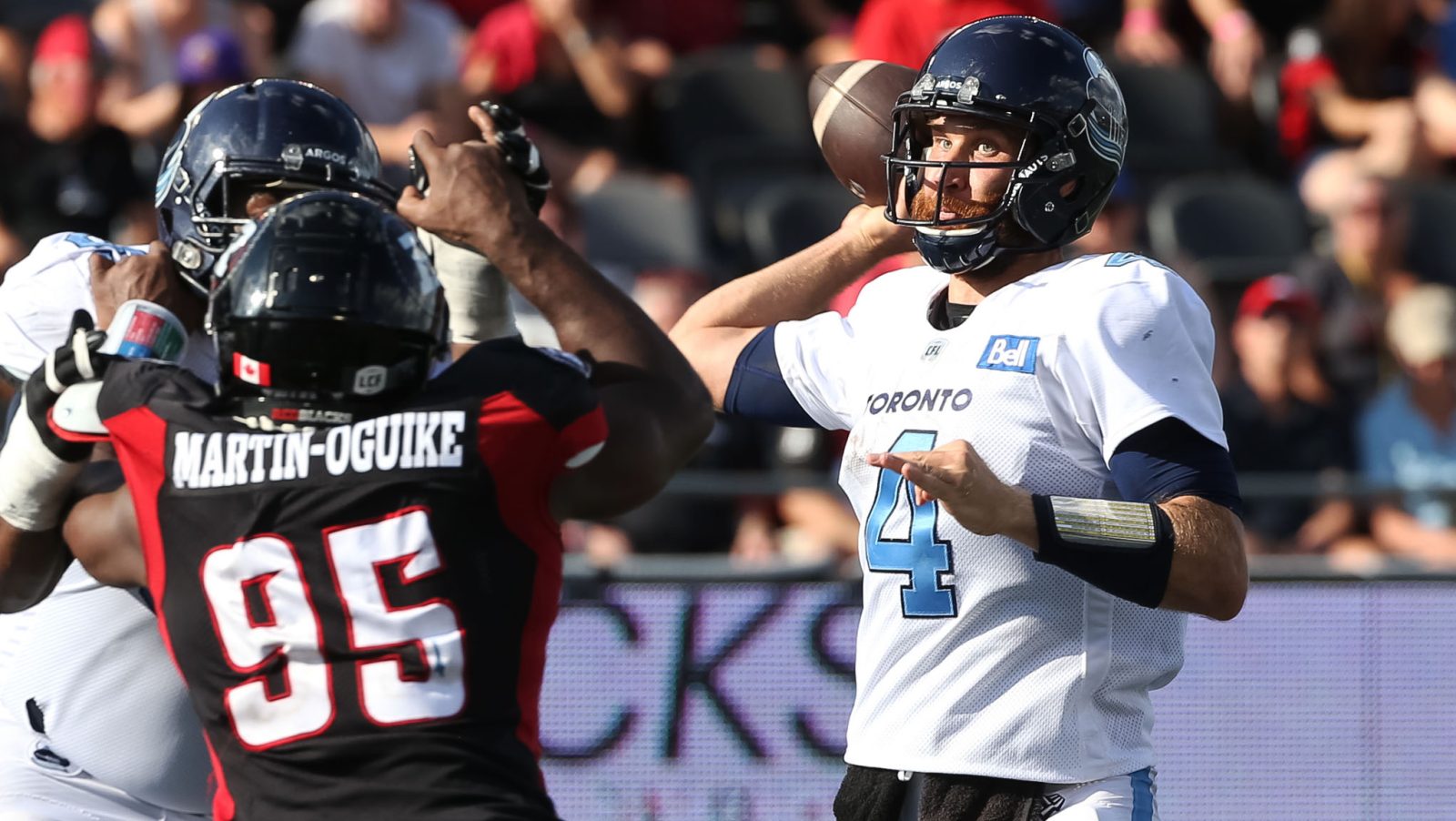 Okay, after a week of absolute misery of picks, it’s that time of year to go full Costanza.

As in, go against every intuition you have and pretty well pick the opposite of what your mind and/or gut tells you is the right decision. Of course, I’m likely three weeks to late with that philosophy, as I and some of the rest of the esteemed panel of ‘experts’ have more wrong than right of late.

Certainly you out there in internet land have had better luck trying to figure out this league since the calendar turned to September. Good teams are bad and the bad teams are good and we’re setting up for quite the amazing finish to the season. So here is the reason why I’m picking a certain team to win and then picking the opposite of my defence.

I’ll either be right, or I’ll be right. Tune in next week to see if my pick was better than my pick. If you’re following along, congratulations. 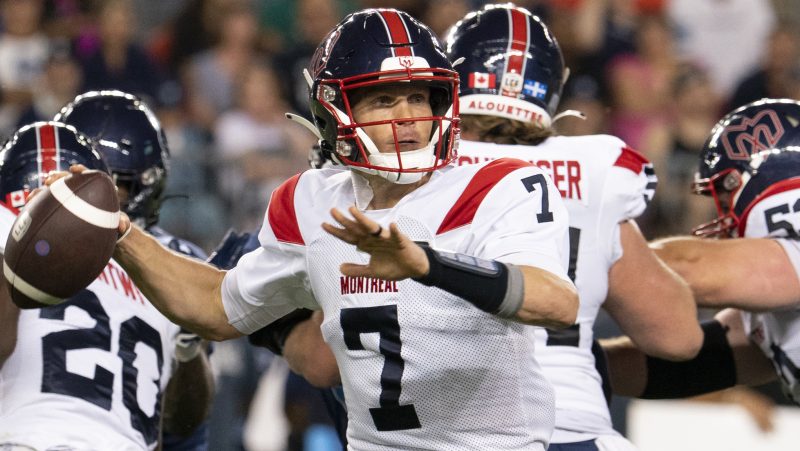 Trevor Harris and the Montreal Alouettes will be looking for a win at home this Friday night against the Ticats (Peter Power/CFL.ca)

I felt like Thud Butt (yes, that’s the character’s name) in Hook while I was watching Dane Evans and the Tiger-Cats roll to a win over the Blue Bombers.

‘There you are, Peter.’ But instead of an ensuing food fight, it was Evans tossing the ball over the field, looking like the franchise quarterback we believed the Tiger-Cats had locked in on before 2022 began.

Evans is healthy and looked extremely confident. And of course, the Ticats defence is still one of the more talented groups around.

A little bit of burst and some great momentum suits up for a solid chance at a road win against the Alouettes, who are coming off a bye week.

Last time out the Alouettes beat up on a woeful BC Lions team, who were trying to survive life in the transition from Nathan Rourke to Vernon Adams Jr.

These two teams went down to the wire with a David Cote walk-off field goal, ending a dramatic division rival matchup. I expect some more of the same fireworks but believe Hamilton will ride the wave of momentum over from last week to climb the standings to climb into a tie with Montreal for second. 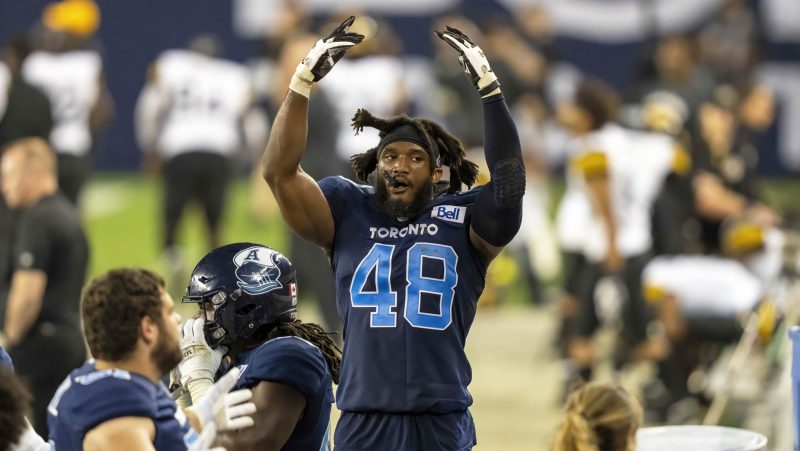 Wynton McManis and the Argonauts return from their bye to take on the Ottawa REDBLACKS in the nation’s capital on Saturday (Kevin Sousa/CFL.ca)

These two teams both return from bye weeks that were preceded by a hard fought Argo win over Ottawa two weeks ago.

You wonder if Paul LaPolice is kicking himself a bit for not kicking a late field goal to cut the lead to two as the REDBLACKS may have had a chance to kick a game winner a minute or so later.

Ottawa’s play has definitely improved with Nick Arbuckle at quarterback and the defence is spending a lot less time on the field and is looking like a group coming together at the right time.

Toronto has been the class of the East Division for the better part of the season but those around them are getting better and the road to first place is not as clear as it may have been when the other three teams were in disarray.

And it’s interesting that when you look at a lot of the key stats from the first 15 weeks of the season, these two teams are not as far apart as their records may indicate.

The one thing that is a sizeable advantage in this game is in the trenches, as Ottawa is a +7 in sacks for/sacks against, while Toronto is a -11. I really do believe Ottawa could surprise Toronto and get some revenge for that game two weeks ago. 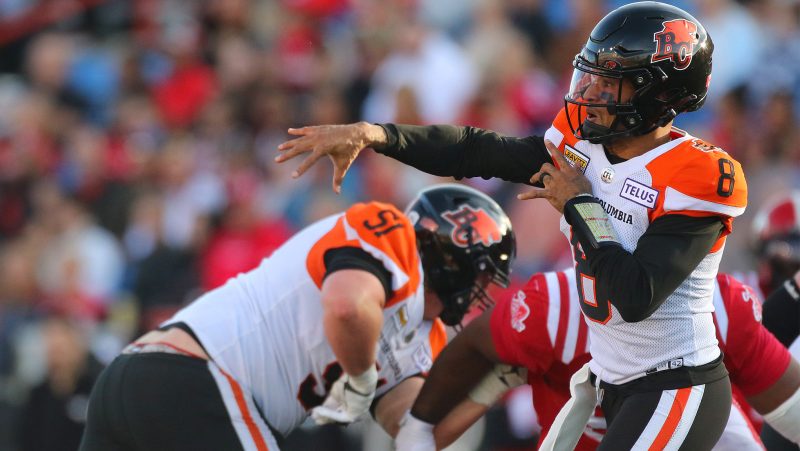 Vernon Adams Jr. is looking to win his second game as a starter for the BC Lions this week against the Stampeders (Dave Chidley/CFL.ca)

I knew it! Vernon Adams Jr. would make a difference for the Lions. I just didn’t think it would be that quickly. Adams completed a high percentage of passes and used his legs at the right times to extend drives in a dramatic overtime win against the Stampeders on the road.

Adams looked far more decisive than even the Lions quarterbacks who were in the previous two weeks that have had a lot more time around the receivers and playbook. It’s clear a veteran presence could stabilize a talented roster and get them going in the right direction again.

The Stampeders can’t beat the best two teams in the league as all five of their losses are to Winnipeg (x3) and BC (x2). So is Calgary just a pretender in the CFL West Division? Only one win of their eight have come against a team above .500.

However, it’s not like those five losses weren’t close. All of them were within a touchdown or less.

When looking at this game, I believe the Lions will be another week better with Vernon Adams Jr. and even have a better feel for what Adams does well. If Calgary can’t beat BC after Adams gets one week of practice with the first team, I don’t know how they expect to this week.