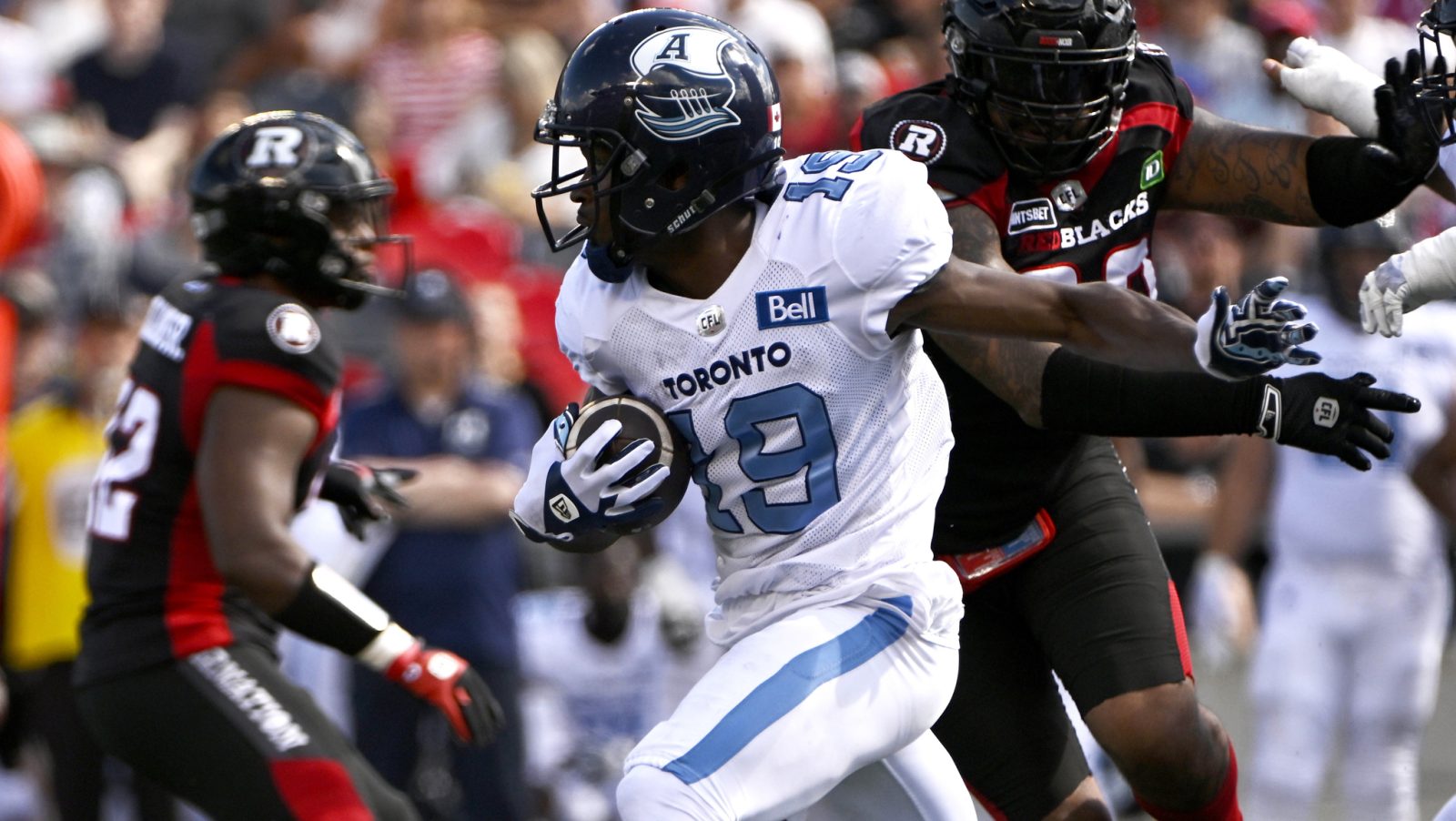 When the Toronto Argonauts travelled to Ottawa a few short weeks ago, the REDBLACKS’ road win at BMO Field was still a relatively fresh wound.

In that game in Week 8, Ottawa picked up their first win of the season through the strength of quarterback Caleb Evans making smart plays with both his feet and arm, while managing the game late to take some of the heat off Ottawa’s coaching staff following a series of close, painful losses.

Last week, in came the Argos looking to avenge that loss, and as the first half evolved, a consistent storyline took place. In his first game back with Ottawa following an NFL stint, defensive back Brandin Dandridge got isolated and attacked over and over, and over again.

The vast majority of Argos pass targets went to whoever had Dandridge lined up across the line of scrimmage from them. He’s a player who started his CFL career with three interceptions and had five overall before getting scooped by the Kansas City Chiefs and he appeared to be the sole focus of head coach Ryan Dinwiddie’s attack, leading to a productive day for Brandon Banks.

This was no mistake. With each snap, throw and completion, it began to feel increasingly like Banks’ 2018 and 2019 seasons in Hamilton under then Ticats head coach June Jones’ Run N’ Shoot system, which prioritizes reading defensive leverage with isolated option routes. After the game I talked to a couple different Argos members to learn that my eyes weren’t lying, Dinwiddie has been slowly phasing in the x’s and o’s that made Banks the 2019 Most Outstanding Player and created two years worth of jaw dropping stats including 206 catches on 287 targets, 2,973 yards and 24 touchdowns.

Bringing Banks to life in that game followed just days after he had two touchdowns to maintain his perfect record in Labour Day games and the symbolism of doing it with the Ticats’ old attack wasn’t lost on me. It could be a hugely meaningful development in the Argos season should Banks stay healthy and continue to get looks he knows and loves.

The first half of that REDBLACKS/Argos game was defined by Banks attacking Dandridge, while the second half, and arguably the difference in the game, was National receiver Kurleigh Gittens Jr., who dominated to the tune of a career-high 161 yards on eight catches, including his third touchdown of the season.

The Argos are undefeated when Gittens Jr. has a touchdown catch this season, and his overall impact on the offence has been larger than anyone not named McLeod Bethel-Thompson. Entering Week 16, Gittens Jr. is catching 78.5 per cent of first down targets, which leads his team. He’s also the only Argos receiver to have a 100-yard game and he’s done it twice. He continues to lead the Argos in targets and receiving yards, has the longest gain of the year for any Double Blue pass-catcher (70 yards) and leads Toronto in second down conversion catches at 20. He also averages a massive 16.3 yards per catch on second down for a team who ranks third in the CFL on converting the crucial down, meaning that he is a major plus for one of his offence’s largest strengths.

That’s a lot and what it all means is Ottawa has their work cut out to slow down an Argos passing game that is coming into form as the weather cools and playoff seeds start to crystallize.

Take away Gittens Jr. and Banks, and you still have to deal with DaVaris Daniels and sneaky productive Markeith Ambles. Even without Juwan Brescacin or Eric Rogers playing a major statistical role, the Argos attack is finding variety, as always it comes back to coach and quarterback.

When Toronto won in Ottawa, it was clear Dinwiddie and Bethel-Thompson were on the same page and clearly understood how they wanted to attack Ottawa. If there’s one thing you can guarantee about the rematch this week it’s that defensive coordinator Mike Benevides isn’t going to sit idly through another Argos visit to TD Place and watch McLeod throw it all over the place.

Whether that means asking the pass rush, led by Lorenzo Mauldin, to have a big day, rotating coverages on the back end to disguise pre and post snap looks, or simply begging middle linebacker Avery Williams to crank up his superhuman self into creating some big turnovers which could sway the game.

Ottawa has to do everything in their power to carve out a win and start to track down Montreal, Hamilton and Toronto, or the REDBLACKS’ season will end in a few short weeks and they’ll be left wondering what could have been with a healthy Jeremiah Masoli.