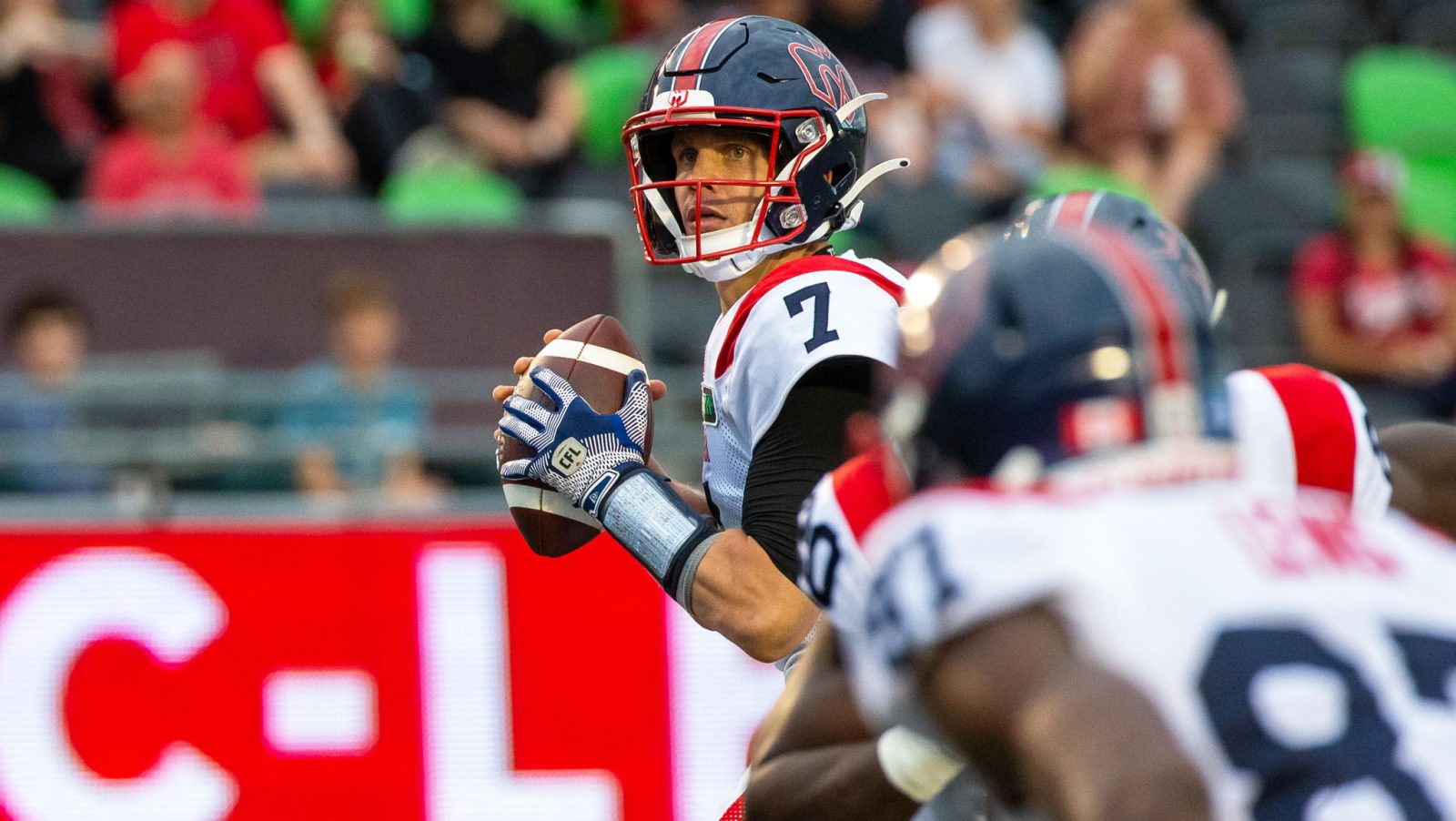 Everyone still has Grey Expectations entering Week 16, a week where it will not be all quiet on the western front as Calgary and BC exchange niceties once again. This week, though, is heavy on the eastern side of things, which will be displayed in our rankings.

Put another way: Catch out East, but run out West. 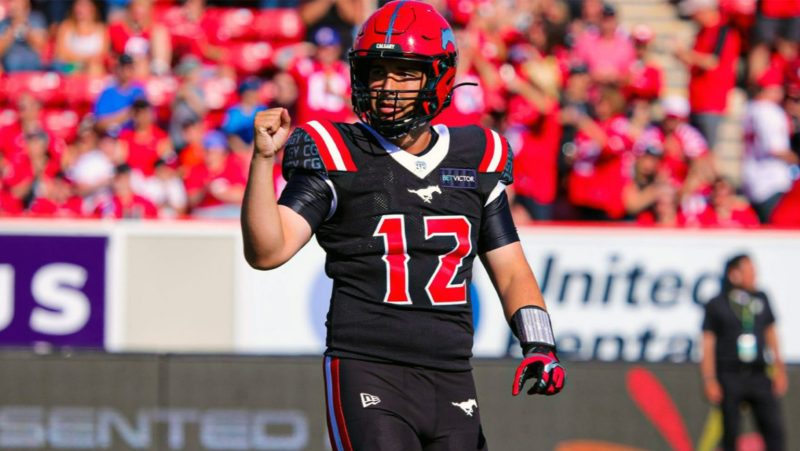 He hasn’t racked up yards on the ground the way other QBs have this year, but Jake Maier could be a fantasy boon waiting to happen this week against the Lions (Stampeders.com)

1. Vernon Adams Jr., BC ($7,072 salary): A strong value play this week, especially since it’s highly unlikely he goes another game of producing 326 yards of offence without accounting for a major. The Stampeders are last in passing yards allowed per game (15 more than the eighth-ranked REDBLACKS) and are one of four teams that have already allowed at least 20 passing majors. Imagine how lethal the Lions offence can be when Adams has a hand in scoring touchdowns.

2. McLeod Bethel-Thompson, Toronto ($8,747): He’s thrown six majors in the past three games and with the Argos relying less and less on the run, that’s a rate Bethel-Thompson should maintain. He’s not the most effective deep ball tosser in the league (33 per cent completion rate of passes of 20 or more yards in depth), yet the passing game (and fantasy users) will continue to thrive with the intermediate style that’s keyed their status atop the East.

3. Dane Evans, Hamilton ($8,825): Don’t add Evans and expect five TD passes; it’s gravy if it happens, but the reason you’re playing him this week is for the anticipation of a quick strike. No pivot playing this week has more passing majors of at least 20 yards in depth than Evans, who has 11 while also owning a 158.3 efficiency rating when dialing up from long distance.

4. Jake Maier, Calgary ($8,700): Lack of a running threat is a negative for Maier, yet he’s thrown multiple majors in three of four starts, along with averaging 280 passing yards. Like the aforementioned Adams, Maier has taken a liking to the deep ball, having thrown six of his nine touchdowns from at least 20 yards in depth. He definitely has the receivers to add to that total and it wouldn’t be too much of a shock if he ended the week as the highest scoring pivot in fantasy football.

5. Trevor Harris, Montreal ($8,438): Harris’ production hinges solely on how Alouettes receivers not named Eugene Lewis ($9,945) step up. As this week’s Start vs. Sit explained, Montreal’s passing game is heavily dependent upon its All-Star wideout, who has six of the team’s league-low 13 completions of 30-plus yards. The offence hasn’t recovered from the loss of William Stanback ($7,604), who could return at some point next month. 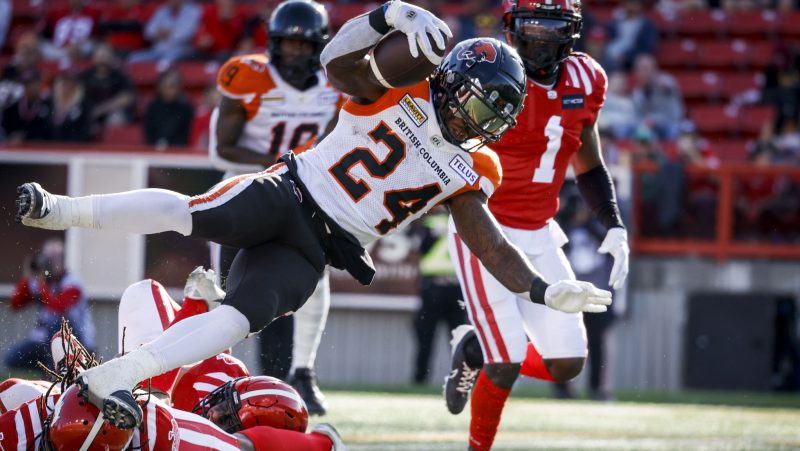 1. Ka’Deem Carey, Calgary ($9,234): We’ll go double or nothing on making Carey the anchor for Week 16 lineups. The Stampeders’ passing game has a lethal edge to it since Jake Maier became the starter, but Carey leads the league with 98 scrimmage yards per game and has found the end zone in two of his last three games. If there’s going to be fireworks on Saturday night, expect Carey to light his share.

2. James Butler, BC ($7,687): The presence of Vernon Adams Jr. brought Butler’s numbers to life in Week 15, as he scored his first major in more than two months and rushed for more yards (83) than his previous three games combined (61). There’s more than enough touches in the BC offence to go around for Butler to be a factor once again.

3. Devonte Williams, Ottawa ($4,854): There’s a reason you run in the West, as seven of the top-10 rushers entering Week 16 are on the left side of the nation. Williams, ninth with 348 yards, has yet to score a major but has become a reliable enough option to where he won’t hurt fantasy users. He had 110 scrimmage yards in Week 14, and there’s considerable upside to suggest he’s got a 20-plus fantasy point game in him this season.

4. Peyton Logan, Calgary ($6,725): Logan leads the league with 164.3 all-purpose yards per game, and while he averages just 38 of those from scrimmage, Logan has shown flashes of being able to take a screen or draw for big yardage. In a week thin with quality RBs, his fantasy value is higher than normal.

5. A.J. Ouellette, Toronto ($5,797): At the very least, Ouellette can contribute in the passing game, having produced two games of at least 12 fantasy points from his receiving. The Argos spread the ball out but Ouellette has become part of that group that McLeod Bethel-Thompson targets frequently. 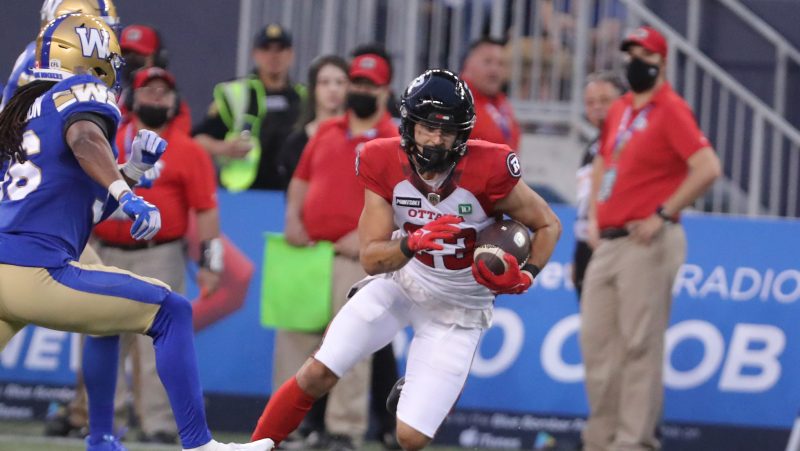 He’s been light on touchdowns this season, with just two, but Jaelon Acklin has been a routinely productive pass catcher this season for the REDBLACKS (The Canadian Press)

1. Eugene Lewis, Montreal ($9,945): Only a Week 10 hiccup against Winnipeg (2.8 FP) keeps Lewis from coming into Week 16 with eight straight games of double-digit fantasy points. Montreal’s passing game begins and ends with Lewis and even though the Tiger-Cats know this, it hasn’t stopped him from posting a combined 46.3 fantasy points in his two previous meetings this season against Hamilton.

2. Tim White, Hamilton ($10,111): Over his past four games, White has caught 31 of his 45 targets for 369 yards and four majors while also adding a bonus fantasy point or two with the occasional run and/or kickoff return. He’s scored at least 17.6 points in three of those games, including a 39 FP performance against Montreal in Week 11.

3. Jaelon Acklin, Ottawa ($7,953): About the only thing Acklin doesn’t do is score, as he has just two majors this season. It’s a mild dent that’s more than offset by his high volume of targets that’s helped him to a league-best five games of at least 100 receiving yards, two of which have come at the expense of the Alouettes’ secondary.

4. Dominique Rhymes, BC ($9,441): It’s not often Rhymes isn’t a top-three receiver, but don’t hesitate to build a fantasy lineup around him this week. He’s looking like the dominant receiver he was earlier in the season and the addition of Adams to the lineup could be the ignition for a strong late season run.

5. Malik Henry, Calgary ($8,822): If he gets behind your secondary, good luck. Henry has caught at least one pass of 50 yards or better in his last three games with each resulting in majors. His 13.9 yards per route continues to go higher with each deep connection with Jake Maier.

6. Bryan Burnham, BC ($8,454): No one was happier than Burnham to see the Lions’ passing game return to its regularly scheduled programming, after he put up his fourth game of at least 17 fantasy points in the win over the Stamps.

7. Kurleigh Gittens Jr., Toronto ($7,676): He’s emerging as the go-to option in the Argonauts’ diverse passing game. Gittens has been targeted 33 times in the last four games and showed what he could do with a heavy load after tallying 161 yards and a major on 8 of 12 targets in Week 14.

9. Steven Dunbar Jr., Hamilton ($7,261): Dunbar broke out of a tailspin with 18.6 fantasy points in the surprising win over Winnipeg. He had double-digit FP in seven of his first eight games and will be a solid complement to any fantasy lineup.

10. Lucky Whitehead, BC ($9,106): There’s always that one top-end receiver overdue for a breakout, and Whitehead is this week’s Exhibit A.

2. Montreal ($3,226): If we’re looking at turnover ratios too hard to ignore, then we’ve got to look at the Alouettes facing a Ticats’ offence that has made a league-high 41 turnovers.

3. Toronto ($3,822): One could also look at Ottawa’s ($4,029) when you consider both the Argos and REDBLACKS are tied for the fewest offensive majors in the league.

Toronto: McLeod Bethel-Thompson ($8,747), Kurleigh Gittens Jr. ($7,676), Damonte Coxie ($2,500). Coxie is working his way into favoured target status with Bethel-Thompson and if the trend continues, he’s due for a solid outing on Saturday. Play this $18,923 stack and run with it.