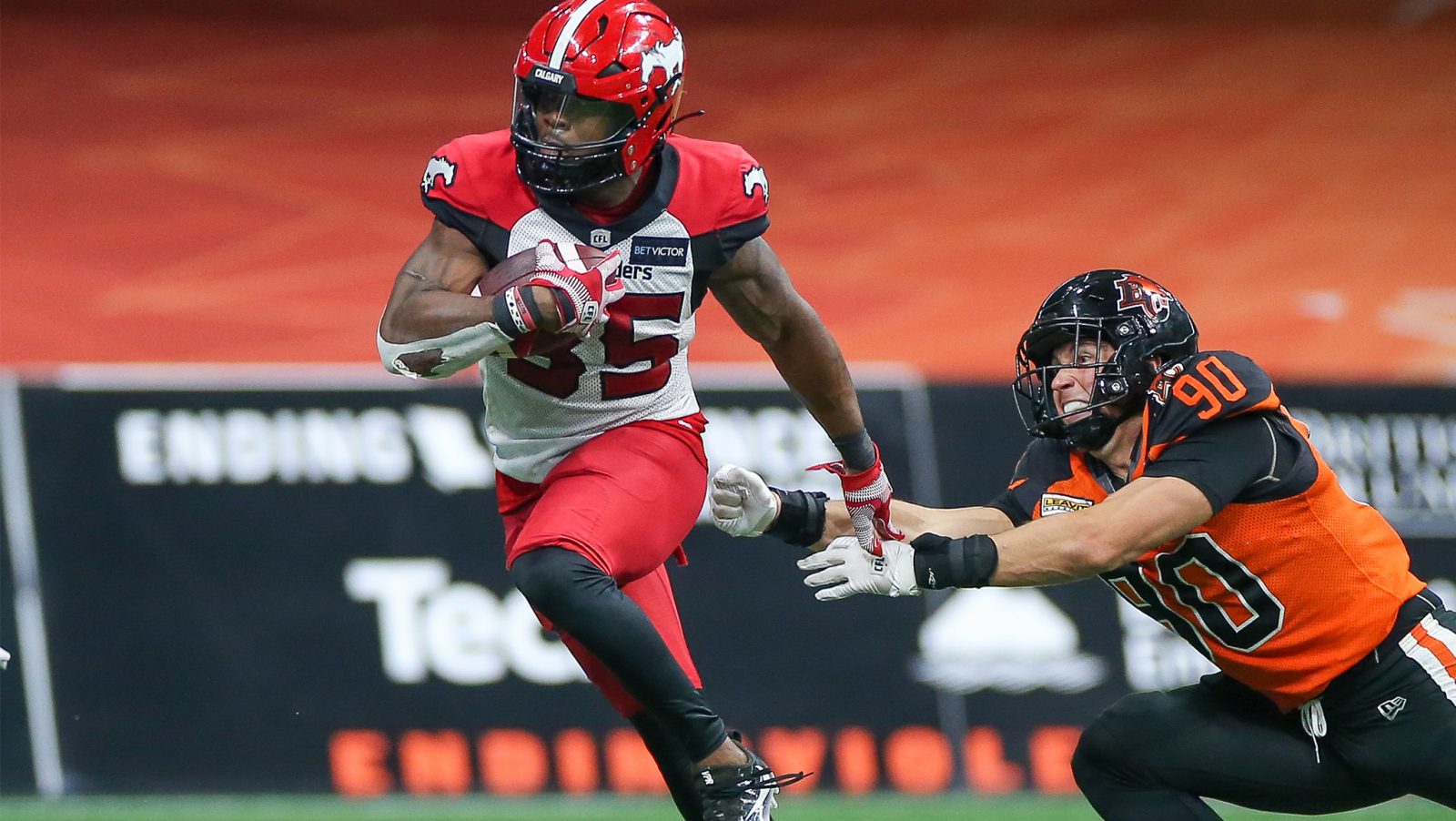 Hello, Josh Pearson. A round of applause for your anthem singing prior to the BC Lions’ home game Saturday night.

It takes courage to go high for a ball over the middle but, I’m sure it takes another level of courage to trade that for a microphone at midfield before a game. It won’t earn you consideration for the CFL Top Performer, but maybe it should.

Here are the Week 16 takeaways.

THE STAMPEDERS WILL PUSH YOU AROUND

As the weather cools and the tacks become brassier, it is apparent that the Calgary Stampeders have some crucial things going for them as the big games come into view.

The defence was gritty in BC and with five sacks and five knockdowns, it was plain to see that both the defensive front and the back end unit were in sync.

On offence, the game ball was handed to the offensive line, with Bo Levi Mitchell highlighting the zero sacks given up and the near 150 yards rushing on the night. “I know they hate when we do it, but it’s got to go to the boys,” said Mitchell before tossing the game ball to centre Sean McEwen.

The loss of left tackle Derek Dennis, early, might have been reason to assume the Calgary line might suffer some consistency problems, but replacement Bryce Bell slipped in unnoticed, always a good thing for an offensive lineman.

Last week I wrote that a Ka’Deem Carey run could form the basis of an entire Marvel Universe movie. A week later I need to say the same thing about Carey’s running mate, Peyton Logan, after Logan’s ridiculous 19-yard touchdown run against BC.

“That was just awesome,” said a very impressed Jake Maier. “Maybe one of the greatest runs I’ve ever seen.”

Way to live up to the team name, Peyton. Benedict Cumberbatch is looking over the script of that run as we speak, with a release date of summer 2024 being eyed.

A GOOD PROBLEM TO HAVE

When Shaquille Richardson went down with an injury a few weeks ago, the Toronto Argonauts had big, big shoes to fill in the secondary and a lightly-played replacement stepping in.

Early on, Maurice Carnell IV dropped a couple of what looked to be sure interceptions as he slid into the role, so that might have raised some concern. However, the lightly-played Carnell has been lights out recently, with three interceptions in two games, including two on Saturday against Ottawa; one of which he returned for a 35-yard touchdown.

With a loaded secondary playing very well right now, the Argos are going to have a numbers problem when Richardson is ready to play. But as problems go, that’s a very a good one to have.

THE LIONS NEED TO SMOOTH THINGS OUT

A subdued, soft-spoken Vernon Adams Jr. seemed perplexed and disappointed during his post-game media conference on Saturday night. The BC quarterback had only short, general answers to the queries that came his way. Adams had just finished a game in which he went 12-for-24 for 151 yards, putting up a paltry three points prior to being replaced by Antonio Pipkin in the fourth quarter.

“The two and outs,” said Adams. “It’s just unacceptable,” was one answer. And “I’ve just got to get through my reads a little quicker, I do believe,” was another.

The conundrum for Campbell and the Lions is finding a way to ensure Adams performs as he did during that win in Calgary. If they don’t, they stand a good chance of being on the road when the playoffs open.

THOSE ARE HARD HABITS TO BREAK

Both the Ottawa REDBLACKS and the Hamilton Tiger-Cats suffered from regression in Week 16.

The REDBLACKS came into the game against Toronto knowing they should have won their previous meeting, and they had won their two previous games against the Argos.

Ottawa should have been primed for a decent showing against the Argos and looking for a win that would vault them into the thick of possibilities surrounding a final playoff berth in the East. But their 45-15 loss to Toronto brought Ottawa’s tally of home losses to 21 of their last 22 and after a brief, shining moment of unbridled optimism, the REDBLACKS are back to searching for answers.

The Ticats slipped back into an irritating habit in their loss in Montreal. Driving towards a game-tying touchdown against the Alouettes, they turned the ball over in Alouettes territory with a minute to go. That allowed Montreal to seal the win, sending Hamilton home wondering just how they let that happen.

AND FINALLY… The best way to stop Eugene Lewis? Pray for mercy.