Cauz: Shining a light on the Stamps, Argos defences 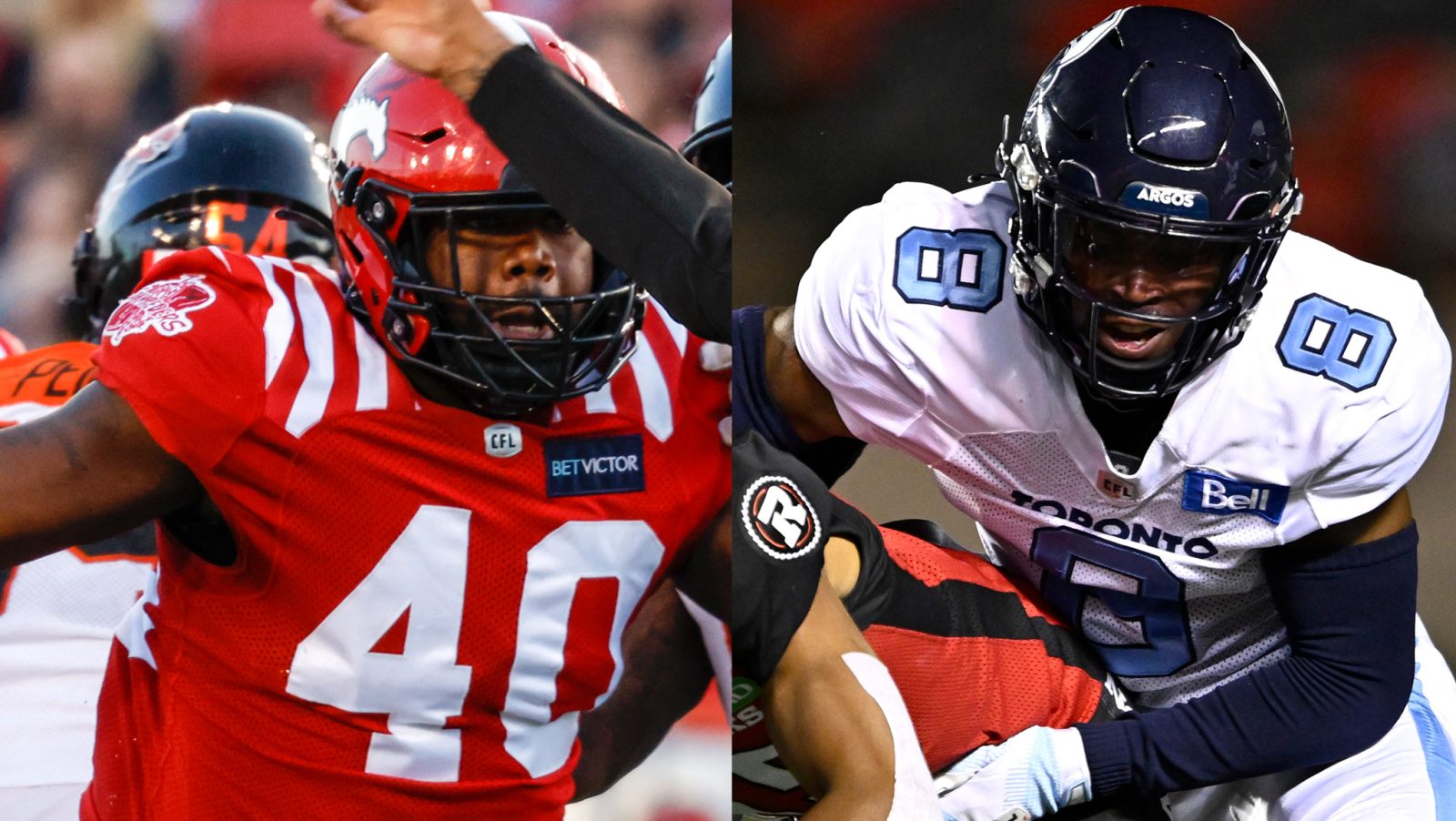 Cauz: Shining a light on the Stamps, Argos defences

Normally whenever I look back at a game or look ahead to what is to come, I focus on the quarterbacks.

I’m really no different than most football fans or the media. We all get caught up in the passers, the targets he’s throwing to, and if we’re feeling especially ambitious, we may throw a bone or two to the individuals in charge of protecting the golden boy’s blind side.

Yes, it can be the easy narrative, but it is often the most compelling and if we’re being intellectually honest, no position dictates wins and losses quite like the quarterback. The obvious story line for next week’s clash between the Toronto Argonauts and Calgary Stampeders is that we get to see a battle between youth and experience.

In one corner, the young upstart Jake Maier is looking to continue to make a name for himself as he tries to get out of the shadow of Stampeders legend Bo Levi Mitchell. On the other side of the spectrum, we have McLeod Bethel-Thompson, who led the league in touchdown passes in the last full season (2019), currently is the CFL leader in passing yards and leads in “yeah buts” as in “yeah, he is productive, but can he carry a team all the way to a championship?” McLeod is nearly a decade older than Jake, so he most likely has fewer years left to prove himself than Calgary’s young gun. You can see where this column is going, right?

After what I saw in their Week 16 wins, I can’t wait to see what these respective defences have up their sleeves! This is not about me trying to be different or to win points with the hipster, cool-kid CFL crowd. This is about recognizing the excellence we saw from both these units and genuine excitement to see what sort of level of carnage they can inflict in Week 17.

Let’s start with the Toronto Argonauts. Oh, what a treat it was to have Ja’Gared Davis back on the field after missing the past month with a knee injury. I’m assuming the Ottawa REDBLACKS offensive line was not as thrilled as Davis finished the day with two sacks. The first one is what sticks out as the two-time CFL All-Star bullied his way through a couple linemen and running back Devonte Williams on his way to taking down Nick Arbuckle. Any chance for a last second field at the end of the first half ended on that play.

The biggest star was, of course, Maurice Carnell IV, who had two interceptions, the second of which he returned for a touchdown. His first act of thievery was a classic case of anticipation with Carnell diagnosing Arbuckle’s intention of getting the ball to Darvin Adams, undercutting the intended receiver, and coming up with his third pick of the year. I know it sounds odd to say this was the play of the game considering Toronto won by 30, but at the time Toronto only led 3-0 and momentum was on Ottawa’s side as Abdul Kanneh had picked off MBT in the end zone moments earlier.

What stands out about Maurice’s second interception was not the act of stealing, but about the ensuing return touchdown as he channelled his inner Kurleigh Gittens Jr. making several REDBLACKS miss, looking more like a star wide-out than a defensive back.

Beyond the heroics of all the takeaways, what stood out was how often Toronto defenders swarmed to the ball the moment any Ottawa receiver hauled in a reception. The first quarter was all about short throws from Arbuckle on second down and any hope of a conversion quickly died due to sound tackling.

I am so curious to see how the cat and mouse game between Maier and players like Carnell, DaShaun Amos, Chris Edwards and Wynton McManis (he picked off Caleb Evans while being engaged with centre Cyrille Hogan-Saindon!) plays out. Will they be as successful deciphering the intentions of the Calgary quarterback like they were able to do this past Saturday? Does Jake double pump them to death for big gains? Will they be able to “read Maier’s mail” (Trademark: Matt Dunigan) or will Jake figure out how to take advantage of their aggressive play?

On the flip side, Toronto’s offensive line is going to have to do a better job against Calgary than the last time they faced off in Week 11. On that day, the Stamps took down Bethel-Thompson five times and they could easily eclipse that number based on what we saw in the wee hours of Saturday night against the BC Lions.

I hope everyone else is enjoying the season that Shawn Lemon is putting up at the age of 34. I loved his sneaky/casual move of sliding from the edge to under centre in the first quarter as he knocked down a Vernon Adams Jr. pass. His third quarter sack on Adams was as tenacious as a Winnipeg Blue Bomber fan on Twitter when I pick against them. He spun past the right tackle and just kept fighting until he took down the Lions new quarterback.

Later on, it was Lemon’s football IQ and athleticism that forced a scrambling Vernon Adams right into the maw of Folarin Orimolade. Lemon received no statistical accolade for that play, but he was the reason Adams went down. I saw blunt force damage by Mike Rose all over the Lions offensive line and Jonathan Moxey had 1980’s jeans tight coverage at every level of the secondary whether it was denying Keon Hatcher or Dominique Rhymes. I left the game so impressed with how physical Calgary’s defensive front was, it was rare to see Adams ever look comfortable dropping back. I was getting 2017 flashbacks during Calgary’s 25-11 victory.

The correct headline should, of course, be about the quarterbacks, the immense contrast in who they are now, their respective journeys and future demands they get the limelight. However, my guess is the final result will be dictated by which defence can best replicate the devastation we just witnessed.