It’s in the midst of a conversation with Dane Evans that Chief Stacey LaForme hits on a point that resonates in a unique way on Sept. 30, the national day for Truth and Reconciliation.

“Is it enough? I don’t know but it’s good enough. It’s fine, we can use reconciliation. The idea is we try to make things better. We try to put things back the way they were intended to be before we made all of these foolish steps in the middle to try and think that everything should all be the same. What a boring world we’d be living in if everything was the same.”

Evans used a recent non-practising day away from the Hamilton Tiger-Cats to meet with Bennett and to tour the Mississaugas of the First Credit Nation and the Six Nations of the Grand River. CFL.ca was there to record the experience. 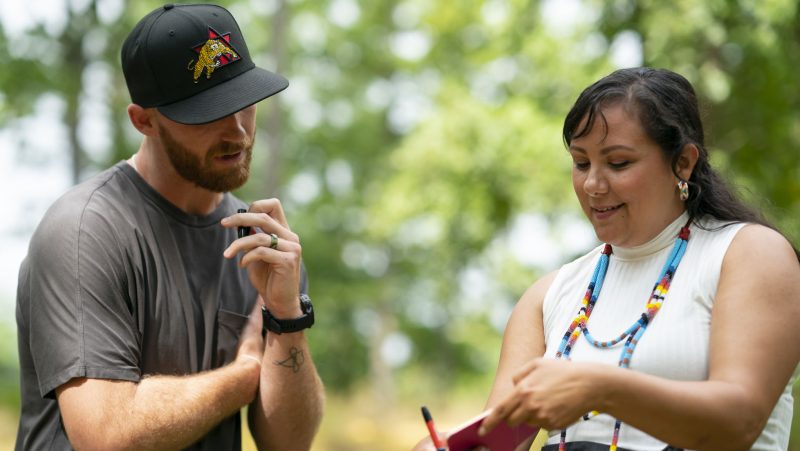 Evans was able to meet with Nikki Shawana of the Mississaugas of the Credit to learn about the Anishinaabemowin language (Photo: Peter Power)

A proud member of the Wichita and Affiliated Tribes, with his lineage coming from his father’s side, Evans shared some details of his background last year. His great grandmother was the last fluent speaker of the tribe’s language and his grandmother went through the United States’ equivalent of residential schooling.

Chief LaForme said that the 2021 discovery of unmarked graves on the site of a former residential school in Kamloops, BC provided a harsh dose of reality on just how damaging the schools were for Indigenous people across the country.

“For a long time,” Evans added, “people just thought this was something you read about in a history book. It was a black and white photo and it didn’t affect you. The last residential school didn’t close until the ’90s, the late ’90s at that. The mass graves that were found, I think that wakes people up.”

There was reflection on Truth and Reconciliation’s origins and what it’s about, but the day was also a celebration of Indigenous culture. Evans and Bennett met with Nikki Shawana of the Mississaugas of the Credit to discuss the importance of preserving and sharing their language, Anishinaabemowin.

Evans and Bennett then spent time with Kevin Sandy, the director and CEO of the Iroquois Lacrosse Program, to discuss the significance of the game in Indigenous culture. They went from talking about the game to playing it – something Evans hadn’t done much of in his life – with Cody Jamieson, a Six Nations member and professional lacrosse player with the Halifax Thunderbirds of the National Lacrosse League.

Evans went into that lacrosse lesson with a special gift. His racket was a gift from Bo Henhawk, a Six Nations member and lacrosse player that makes high end, wooden sticks as a means of playing the game the way The Creator intended.

“I’m very hands on, very active (as a learner),” Evans told Bennett when they’d reached the end of their day.

“It’s one thing to read about it online or in a book but when you get out here and you talk to people that live out here and are from here…I’m a sport guy, so it was amazing to see how sport is correlated to everyday life in this instance and how a game such as lacrosse or football can tie everything together. It’s bigger than sports, that’s pretty awesome.

“We might all be from different walks of life…but we’re all pulling towards the same thing. Everybody knows that what happened (with residential schools) was bad and it’s not about pushing it away anymore; it’s about learning and moving forward from it.”