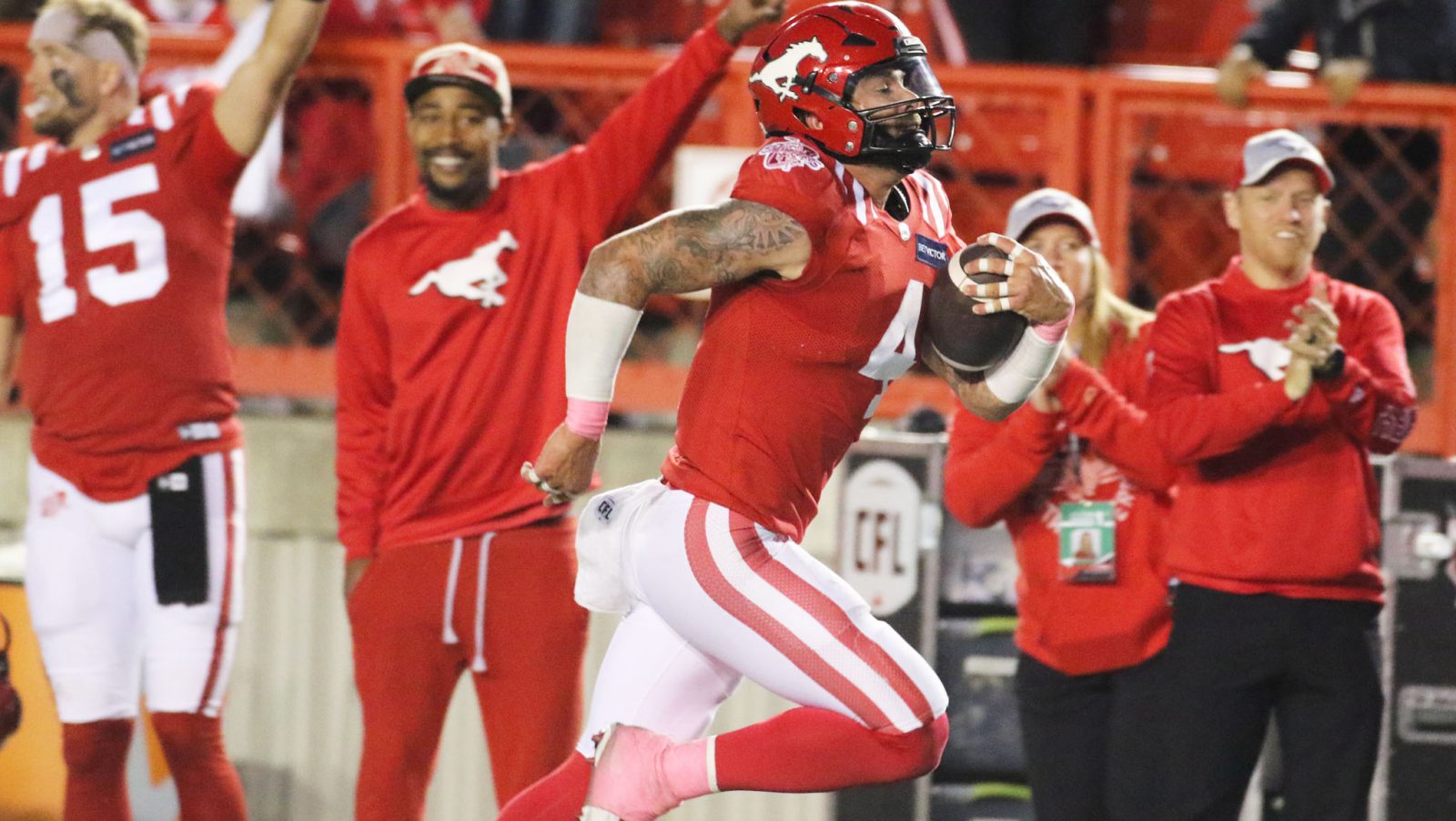 CALGARY — The Calgary Stampeders picked up their 10th win of the season with a 29-2 win over the Toronto Argonauts at McMahon Stadium on Saturday night.

Calgary’s defence held McLeod Bethel-Thompson to 85 first half passing yards and 195 yards through the air overall to give their offence plenty of breathing room to make plays.

Jake Maier threw for 175 yards and found Reggie Begelton for a touchdown.

Malik Henry caught four passes for 26 yards, giving him 1,023 yards on the season. He becomes the fifth receiver to reach the 1,000 mark.

With the win, Calgary moves back into a tie with the BC Lions for second in the West Division and remain six points back of first place Winnipeg.

The loss allowed the Montreal Alouettes to move within two points of the first place Argonauts in the East Division after they won against the Edmonton Elks earlier in the day.

Bethel-Thompson completed 19 passes and running back AJ Ouellette rushed for 66 yards as the Argos offence had a hard time getting in sync throughout the game due to the aggressive Stamps defensive front.

RELATED
» Box Score: Argos, Stamps by the numbers
» Through the Lens: Toronto at Calgary
» Watch: Judge extends the lead with pick-six
» Defence steps up to lead Stamps to 10th victory

It was a battle of the defences through the first quarter as the two teams traded possessions but failed to score.

One of the best offensive chances came late in the quarter when Jake Maier found Richard Sindani twice for 31 yards to move into Toronto territory. But an Henoc Muamba interception snuffed out the Stamps drive.

Toronto didn’t escape the first quarter unharmed, however, as linebacker Wynton McManis went down with a lower body injury and defensive lineman Shane Ray was seen with his arm in a sling on the sideline.

The Argos began the second with a two and out but picked up a single on the punt to take a 1-0 lead.

On the Argos next drive, Jameer Thurman picked off a Bethel-Thompson and returned it down inside the Argos 25-yard line.

The turnover would prove costly for the Argos as Maier found Henry again for a seven yard reception before connecting with Begelton for the first touchdown of the game to give the Stamps a 7-1 lead.

On the ensuing drive, a 10-yard Bethel-Thompson pass to DaVaris Daniels and an 18-yard run by Oullette moved Toronto onto Calgary’s half of the field. The drive ended with a 50-yard field goal that sailed wide right but the Argos would get a single point back as the attempt went out the back of the end zone.

The Stamps got the ball back and made their way down the field thanks to a Maier completion to Jalen Philpot, a Ka’Deem Carey run and a Toronto offside penalty. Following the penalty Carey broke through for a 19-yard run to bring the ball to the Argos 25-yard line. Two plays later Maier found Begelton on the two yard line. Tommy Stevens then forced his way through the offensive line on the one yard line for a touchdown run.

Both teams would punt on their following drives to end the half.

The Argonauts deferred and received the ball to start the second half but couldn’t capitalize and were forced to punt for the seventh time in the game.

Midway through the quarter Bethel-Thompson led an eight play drive to midfield but the Argos would again be forced to punt after Isaas Adeyemi-Berglund broke through the defensive line for a sack.

A Shawn Lemon sack would close out the Argos final drive in the third quarter and set up another punt.

Luther Hakunavanhu began the fourth quarter with a 30-yard reception to take the ball down to the Argos 35-yard line. Two plays later Muamba picked off his second pass of the game but the Argos again failed to capitalize.

A Stampeders punt pinned the Argonauts deep and Argos head coach Ryan Dinwiddie decided to go for it on third and short. With Chad Kelly taking over on short yardage, Calgary took a face mask penalty to give the Argos an automatic first down. Bethel-Thompson’s 21 yard pass to Damonte Coxie got the ball to midfield. After a pair of incomplete passes, Bethel-Thompson completed an 11-yard pass to Daniels.

On the very next play, former Argo Cameron Judge picked off Bethel-Thompson’s pass and returned it for a touchdown. The convert by Rene Paredes was good to give the Stampeders a commanding 21-2 lead they wouldn’t relinquish.

The Stamps would add another touchdown on a four yard Carey run to make it a 29-2 final.

Toronto returns home in Week 18 to host the BC Lions. Calgary will enjoy a bye week.