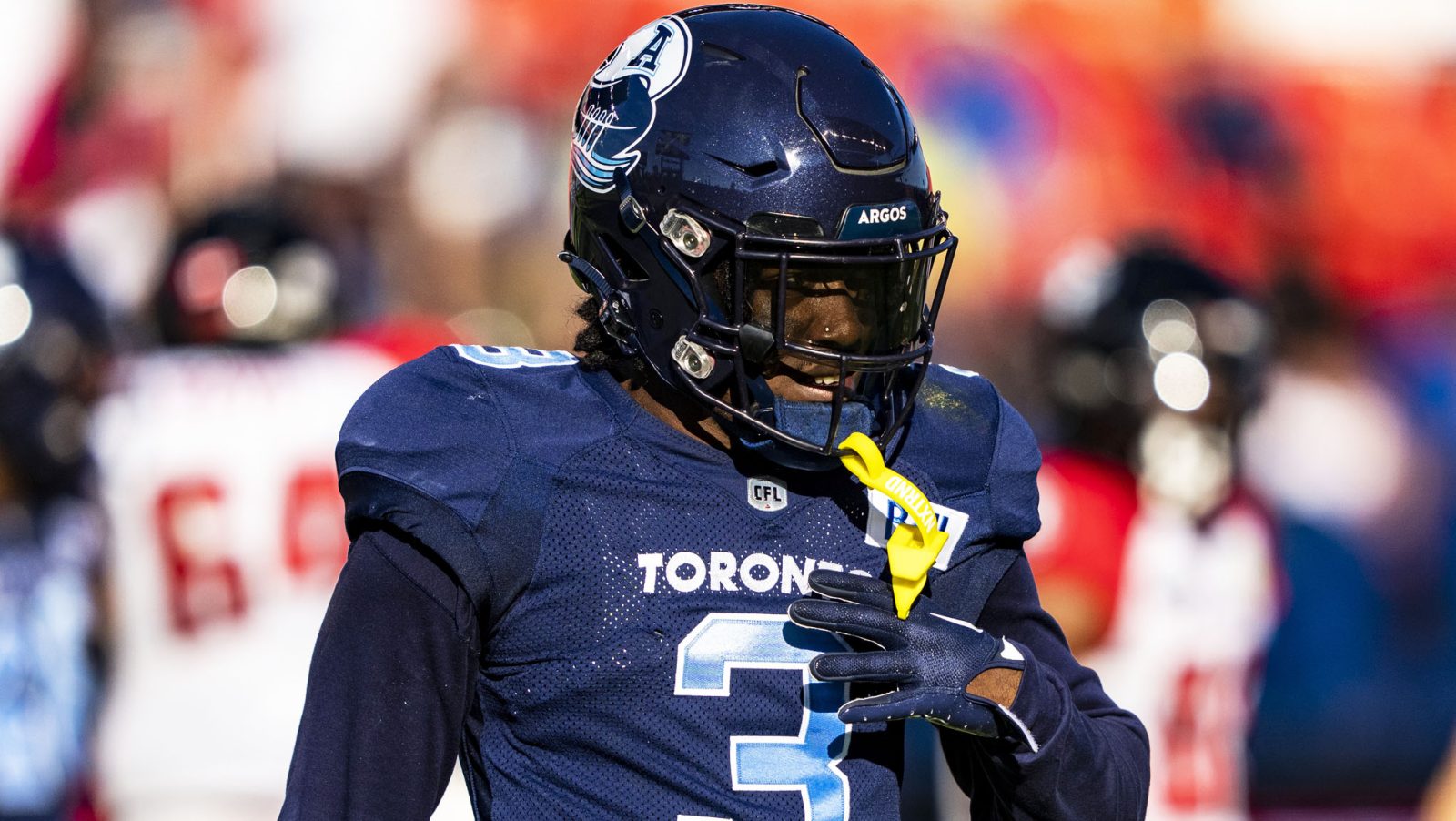 Monday is the launch of the CFL All-Star Fan Vote, which takes place all month long.

For the first time, you get a chance to vote alongside CFL head coaches and media members to help determine Division and League All-Stars at the end of the year. With no desire to influence YOUR ballot, here are five players that are absolutely getting my first-place vote.

The reigning Most Outstanding Player has been the league’s best quarterback all season and is in the driver’s seat to win the CFL’s most prestigious individual award once again. It’s truly incredible how Winnipeg’s fortunes have changed since installing Collaros as starter in late 2019 and, well, the two-time defending champs haven’t looked back since.

This season, Collaros leads the league in passing yards (3,874) and touchdowns (32) and sits top three in quarterback rating, pass attempts, accuracy, and average yards per completion. The Bombers have been the CFL’s best team for two straight years and there are multiple reasons why. But having the league’s best quarterback has to be near the top of that list.

There was some uncertainty when Calgary acquired Judge during the off-season, as he had just finished a down campaign with the Argos. Any of those questions have been emphatically answered in 2022 as Judge has re-emerged as one of the league’s most impactful defensive players.

Starting all season at WILL, he and middle linebacker Jameer Thurman have combined as an elite duo in the middle of the Stampeders defence. In 14 appearances with his new team, Judge has racked up 70 defensive tackles to go along with three sacks, two interceptions, two forced fumbles, five recoveries, and two defensive touchdowns. To say Judge touches every part of Calgary’s defence is an understatement. 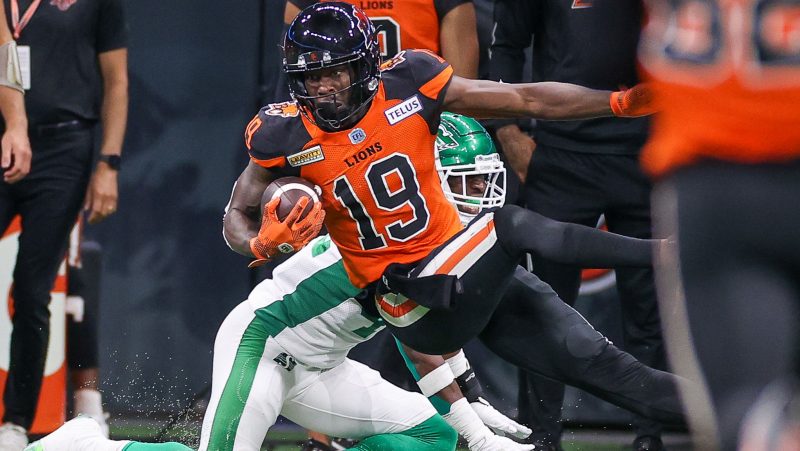 Dominique Rhymes has hit a career-high in receiving yards and touchdowns (10) so far in 2022 (BCLions.com)

When the Lions signed Rhymes ahead of the 2020 season, I thought it was one of the most interesting free agent additions that year. Rhymes burst onto the scene the season prior, going for just over 1,000 yards and five touchdowns as one of Ottawa’s few 2019 bright spots. At the time, he looked like a budding superstar and a resurgent BC team seemed like a great fit.

Unfortunately, thanks to a canceled 2020 season and a 2021 campaign limited to eight games due to an ankle injury, Rhymes dropped off our radar temporarily. That’s not the case anymore. Rhymes leads the CFL with 1,165 receiving yards and sits second with ten receiving touchdowns. And it’s not like Rhymes has been a product of quarterback Nathan Rourke, either; he’s remained very productive since Rourke went down with injury in Week 11.

I have a feeling we’re just scratching the surface with Toronto’s sophomore standout. So far in 2022, Peters leads the CFL with six interceptions, including one house call, and has racked up 48 defensive tackles and a sack. In his first full professional season, Peters has burst onto the scene and, at just 25 years old, he’ll be flying around defensive backfields for years to come.

Mississippi born and raised, Peters went undrafted south of the border before catching on with the Argos in February 2021. After graduating from the practice roster early that season, Peters showed a ton of promise before sustaining a knee injury in Week 10, which caused him to miss the rest of the season. Fully healthy and recovered, Peters has been a huge part of a defence that has paced Toronto to an 8-6 record and top spot in the East Division. 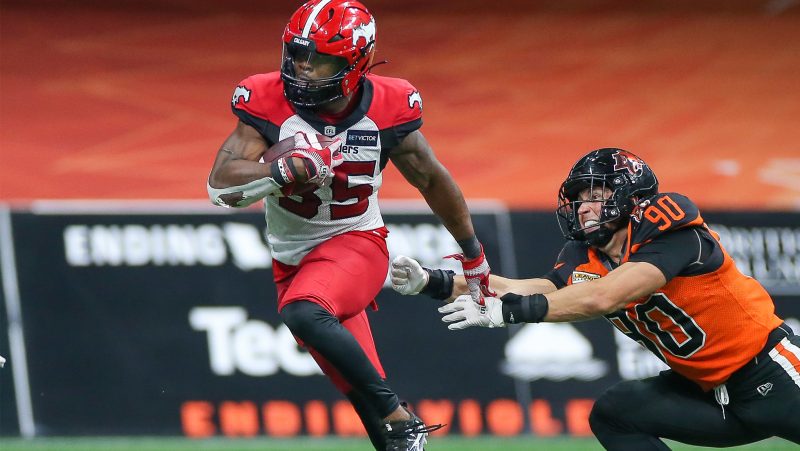 Ka’Deem Carey has been a major factor in the Stampeders offence so far this season (BCLions.com)

Entering this season, there were a few players in the conversation for “best running back in the league.” Calgary’s Carey was in a group that also included Montreal’s William Stanback and Andrew Harris in his first year with the Argonauts. Unfortunately, Stanback sustained a serious injury in Week 1 and has just recently returned to practice, while Harris went down with a torn pectoral muscle in mid-August.

But Carey hasn’t just taken the “best tailback” moniker by default. In fact, nothing could be further from the truth, because he has been almost unstoppable all year. Carey leads the league with 949 rushing yards, which is almost 100 more than his nearest competitor with three fewer games played. His nine touchdowns is also the CFL’s highest total and it feels like the third year member of the Stamps is picking up steam every passing week.

Thanksgiving Weekend presented by Purolator has turned into a fun CFL tradition. This year features four games, including one on Thanksgiving Monday, but it’s the first half of Saturday’s doubleheader that jumps off the page to me.

Saturday afternoon sees BC visit Toronto with both teams trying to lock something up in the standings…something that seemed far more comfortable only a few weeks ago. Even with their important win over Ottawa this past Friday, the Lions are barely holding onto second in the West Division, as hard charging Calgary has cut into their lead with wins in four of five. A BC win this weekend, though, will extend their lead to a full game, which is crucial knowing they also hold the tiebreaker on the idle Stampeders.

The Lions will be facing an Argos team licking their wounds after a rough trip to aforementioned Calgary this weekend. Toronto struggled to generate anything offensively in a 29-2 loss and, with Montreal having won five of their last six, there’s suddenly only a one-game gap between first and second in the East Division. With two head-to-head matchups with the Als to close the season, the Argonauts would love to rack up as much of an advantage as they can.