TORONTO — When the Canadian Football League (CFL) honours the season’s best performers on Thursday, November 17, a familiar face will headline the proceedings: TSN’s Kate Beirness. The fan-favourite host for the CFL ON TSN returns for a second-straight year after helming the event in Hamilton in 2021. Conexus Arts Centre in the heart of Regina will play host to the 2022 evening of celebration. 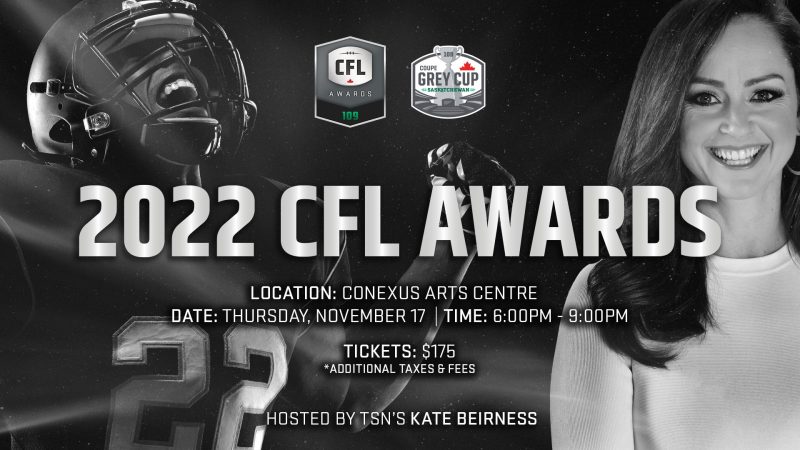 This year’s CFL Awards will honour several influential women from across Saskatchewan who have played a significant role in impacting football across the province and the country, including local heroes, long-standing fans and leaders in the Indigenous community.

Tickets for $175 (plus taxes and fees) are on-sale now and include two complimentary drink vouchers. Red carpet arrivals and the pre-show reception open the event at 6 p.m. local, and the star-studded awards ceremony gets underway at 7 p.m.

Commissioner Randy Ambrosie will highlight exceptional contributions to Canadian football through the Commissioner’s Award and the Hugh Campbell Distinguished Leadership Award. Selected by the CFL Players’ Association, the Tom Pate Memorial Award will recognize sportsmanship and contributions to one’s team, community and association, while the Jake Gaudaur Veteran’s Award will be presented to the player who best demonstrates the attributes of Canada’s veterans in times of war, peace and military conflict. The Jane Mawby Tribute Award will honour one highly valued, yet too often unsung, current employee who works at the club or league level.

The CFL Awards are a flagship event of Grey Cup Week as fans, media and the Canadian football community gather in anticipation of the country’s largest single-day sporting event – the Grey Cup. The 2022 Grey Cup Festival opens on Tuesday, November 15 in Saskatoon before moving to Regina from Wednesday to Saturday. For more information surrounding the CFL Awards and additional events, including dates, venues, purchasing details and more, please visit GreyCupFestival.ca.

The 109th Grey Cup will be played in Regina at Mosaic Stadium on Sunday, November 20 with kickoff slated for 5 p.m. local/6 p.m. ET. The sold-out contest will be broadcast across the nation on TSN and RDS – Canada’s home of the CFL.