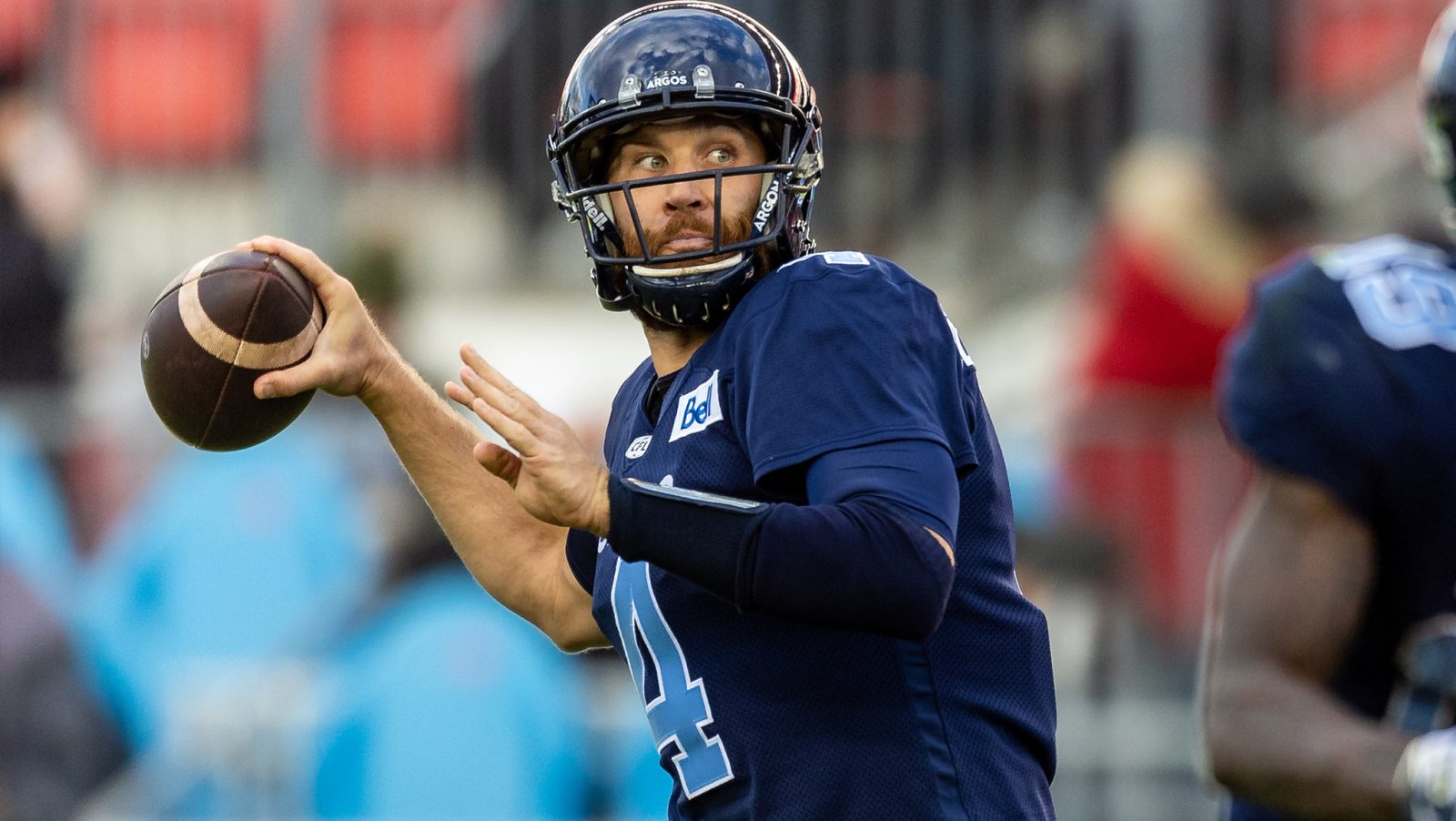 TORONTO — In the 100th regular season meeting between the Toronto Argonauts and the BC Lions, the Argos scored a late-game touchdown to earn a 23-20 win over BC.

Toronto quarterback McLeod Bethel-Thompson told team media earlier in the week that he intended to “make it right,” in reference to their loss in Week 17. Bethel-Thompson delivered on his promise as threw for over 350 yards and a touchdown in the win.

Markeith Ambles and Kurleigh Gittens Jr. led the Toronto passing attack combining for 205 receiving yards, but it was Tommy Nield who played the hero catching the 37-yard game winning score.

Despite entering Thanksgiving weekend presented by Purolator having to deal with the adversity of a number of injuries to their defensive unit, the Argonauts defence showed their resiliency as they recorded three sacks and two forced fumbles in the game.

THANKSGIVING WEEKEND presented by Purolator
» Box Score: Lions, Argos by the numbers
» Through the Lens: BC at Toronto
» Watch: Hollins battles for touchdown catch
» Argos battle through adversity to overcome Lions

After a short punt from BC’s Stefan Flintoft that travelled out of bounds and was ruled an illegal kick, the Argos found themselves with excellent field position to start their second drive of the game. Facing a third-and-two, head coach Ryan Dinwiddie opted to leave the offence on the field and his quarterback delivered, connecting with Gittens for a 15-yard completion.

With a fresh set of downs from the BC six-yard-line, Bethel-Thompson threw a beautiful pass intended for Ambles in the end zone, but the ball fell incomplete forcing a Toronto field goal attempt. Kicker Boris Bede converted the short yardage field goal to score the first points of the game and give his team an early three-point lead.

Nearing the end of the first quarter the Argonauts defence had the Lions backed up near their own goal line. The handoff went to James Butler and Toronto’s Robert Priester delivered a hard hit that jarred the ball loose. Argos defensive lineman Benoit Marion would recover the fumble, giving the Double Blue defence their 40th forced turnover this season.

Following the fumble, the Toronto offence had an opportunity to extend their lead. On third down from the BC four-yard-line the Argos opted to leave their offence on the field once again. For the second time of the drive, Bethel-Thompson drew the Lions pass-rush offside with a hard-count, giving his team another chance at the end zone.

With their offence on the goal line, Chad Kelly replaced Bethel-Thompson under centre to attempt the short-yardage score. Kelly plunged forward for the first touchdown of the game, earning his fourth rushing major of the year and giving his team a 10-0 lead.

The Argonauts offence continued to find ways to move the ball downfield as the second quarter of action continued. Two hard runs from running back A.J. Ouellette and a 15-yard catch and run from Gittens had the offence in Lions territory. Bethel-Thompson then connected with Ambles for a 25-yard completion to put the Argos in scoring range.

Toronto would call on Bede to attempt his second field goal of the game. The veteran kicker split the uprights with an effortless kick form 21-yards away to extend the Argo lead 13-0 midway through the second quarter.

With under five minutes in the half, Butler looked determined to help spark the BC offence as he broke free for a 26-yard gain, setting his team up on the Toronto 33-yard-line.

After the big play from the running back, Adams dropped back and fired a pass towards the end zone. Alexander Hollins made a highlight-reel catch for the touchdown, helping cut the Toronto lead to one score before the half.

Toronto would carry the momentum into the second half as Bethel-Thompson competed a 55-yard pass to Cam Phillips to start their second drive of the third quarter. The BC defence would again keep the Argos out of the end zone and force a field goal. Bede lined up his third attempt of the game, and delivered a 26-yard field goal, helping push the Toronto lead 16-7.

BC began to find their offensive rhythm nearing the end of the third quarter. Adams completed three consecutive passes to help situate his offence in the red zone. Faced with a second-and-10, Adams completed a pass to Javon Cottoy, but he was held short of the first-down.

The Lions called on kicker Sean Whyte to attempt his first kick of the game, Whyte had no trouble as he connected on the 17-yard field goal, closing the gap on Toronto’s lead before the end of the quarter.

BC’s fortunes took a turn to start the final quarter of action, linebacker Ben Hladik found Bethel-Thompson in the backfield and forced a fumble from the Boatmen pivot. Jordan Williams recovered the fumble and returned it 38-yards, but Toronto’s Gittens stripped the ball on the return.

After a scramble for the ball and a review from the officials, possession was ruled in favour of the Lions, giving them a first down from the Toronto 31-yard-line.

Adams and the Lions offence would need just one play to find the end zone following the fumble. The BC pivot connected with Keon Hatcher for a 31-yard touchdown. The converted extra-point from Whyte would give the Leos their first lead of the game.

With just under seven minutes remaining the BC offence again started to work their way downfield, as two passes for 40 yards from Adams and a 14-yard rush from Butler pushed the offence inside of the Toronto 30-yard line.

However, an incompletion intended for Cottoy on second-down would force the Lions to bring out their field goal unit for the second time in the game. Whyte split the uprights on the 29-yard attempt, pushing the BC lead 20-16.

Toronto would waste no time coming up with a response to the BC score. Bethel-Thompson engineered a three-play 70-yard touchdown drive, that was highlighted by a 37-yard touchdown pass to Nield to help the Boatmen regain the lead.

With under two minutes to play the Lions would call on Whyte for his most important kick of the game as the kicker lined up the potential game-tying kick. Needing 41-yards, Whyte had the distance, but sent the kick booming off the uprights. The miss would be all Toronto would need as they held onto to earn a 23-20 win.

Looking ahead to Week 19 the Argonauts will travel west to take on the Edmonton Elks from Commonwealth Stadium. BC will travel home as they prepare to host the division leading Winnipeg Blue Bombers at BC Place.