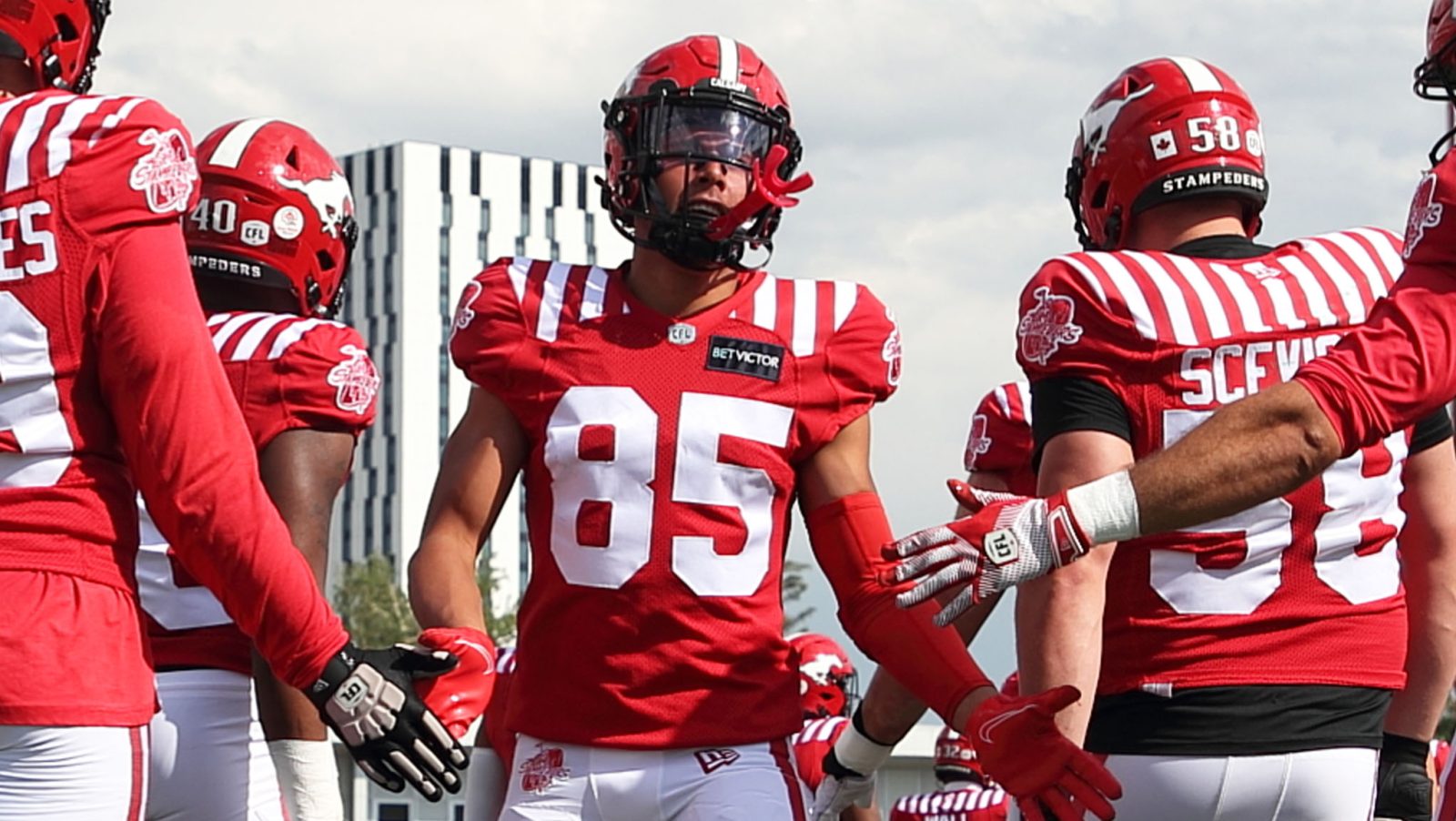 Ranking the players for the final week of Grey Expectations was a challenging yet fun experience that allowed us to not only project which players will see considerable action in Week 21; it will also give a glimpse of who could emerge as potential breakout stars in 2023.

The assumption is that each of the six playoff-bound teams in action will use their starters judiciously while Ottawa and Saskatchewan will likely keep their lineups reasonably intact. With that mindset, REDBLACKS and Roughriders are bound to be seen more favorably. 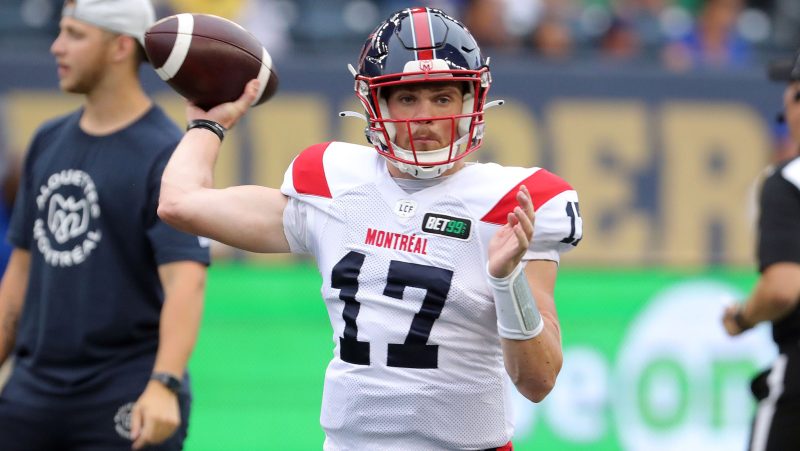 Davis Alexander has dressed for 12 games this season but hasn’t recorded a stat yet. That’ll change this week when the Als face the Argos (Jason Halstead/CFL.ca)

1. Caleb Evans, Ottawa ($5,683): One number is all you need to consider as to why Evans tops this list: 61.2. That’s the percentage of REDBLACKS offensive majors that Evans is responsible for. Not only did he set a new league record with 15 rushing touchdowns by a pivot, Evans does have four TD tosses to his credit. The rest of Ottawa’s offence has 12 majors. Playing against mostly Tiger-Cats reserves, Evans could put up huge numbers.

2. Chad Kelly, Toronto ($6,000): The Argos get an extensive look at the potential future starter for the Double Blue as Kelly will be atop the depth chart when it comes out on Friday. His running skills have been on display (five majors on 5.2 yards per rush), yet Kelly has thrown just 10 times this season. Expect him to toss it around frequently while McLeod Bethel-Thompson ($9,086) observes as the third-stringer.

3. Dru Brown, Winnipeg ($7,510): Lest we forget, Brown produced 22.4 fantasy points in Week 19, throwing for 328 yards and a pair of touchdowns in a loss at BC. Don’t be too surprised if Zach Collaros ($10,859) gets a snap or two in order to stay sharp, but this is likely going to be Brown’s show against the Roughriders on Friday night.

4. Davis Alexander, Montreal ($5,000): Consider this a fun dart throw of sorts. The Alouettes have announced that Alexander will see action on Saturday, so why not take a deep dive at a versatile pivot who produced 81 total touchdowns in four seasons at Portland State? Alexander is the biggest quarterback (five-foot-11, 195 pounds) but his running skills have the potential to deliver bonus fantasy points if he’s reasonably productive with his arm.

5. Nathan Rourke, BC ($12,831): He will start and play the first quarter on Saturday night. There’s every reason to believe Rourke will do Rourke things and make us all say. ‘Oh, what might have been?’ at least once. His salary is exorbitant for someone who will play a quarter, yet there will be more than enough Rourke supporters who will gladly pay for the honour of finally having him back on the field.

6. Bo Levi Mitchell, Calgary ($6,416): Whether this will be the last time we see Mitchell decked in Stampeders red is for another day, but don’t be surprised if we see some flashes of what made him the future Hall of Famer he is.

Dane Evans, Hamilton ($8,692): The good news is that Evans avoided a serious injury. The problem here is we don’t know how the Ticats will divvy up snaps. 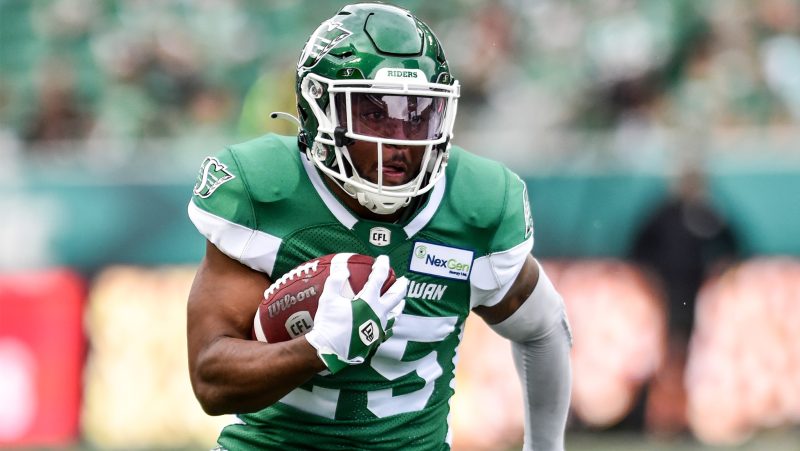 Were it not for a hand injury, how different could Jamal Morrow and the Roughriders’ season have been? (The Canadian Press)

1. Dedrick Mills, Calgary ($4,881): He’s appeared in just five games this season but has scored double-digit fantasy points in four of them while running for over 100 yards twice. We might see a touch or two from Ka’Deem Carey ($9,210), but this will be Mills’ show against Saskatchewan.

2. Sean Thomas-Erlington, Hamilton ($2,853): Both Wes Hills ($5,925) and Don Jackson ($6,019) are back and should be rested up, which makes the Ticats’ use of Erlington more effective against the REDBLACKS, who allowed him to average eight yards per carry in last week’s win. If Hamilton can get this level of production from its third back, it bodes well for their bid for a third straight East title.

3. Johnny Augustine, Winnipeg ($3,598): Starter Brady Oliveira ($6,829) is just 71 yards from a 1,000-yard season. However, we can’t envision the Blue Bombers risking their lead back for a personal milestone, so this is where Augustine could get the most touches he has seen since Week 5.

4. Jamal Morrow, Saskatchewan ($8,548): Morrow had 14 touches in his return to the lineup in last week’s loss to the Stampeders and with little to play for, Saturday is a good opportunity to let him finish up strong. Morrow’s broken hand will go down as one of the biggest “What Ifs” of the 2022 season, as he was playing at an All-Star level before his — and the Roughriders’ season — was altered.

5. Daniel Adeboboye, Toronto ($3,500): With A.J. Ouellette ($6,648) expected to see limited touches, the Argos can use the regular season finale to give their 220-pound sledgehammer a lengthy opportunity to pound away at a Montreal run defence that has allowed 23 touchdowns.

6. Walter Fletcher, Montreal ($6,286): He has become a dangerous presence in the Alouettes’ passing game since the return of William Stanback ($6,469). Montreal will probably use all three of its backs on Saturday with Stanback likely to make a brief appearance before resting up for next week’s Eastern Semi-Final. Fletcher offers more upside than Jeshrun Antwi ($3,048), who has become the odd back out since Stanback came off the injured list.

7. Bruce Anderson, BC ($3,500): James Butler ($10,448) will make a cameo on Saturday before yielding to Anderson, who has impressed at times in the role of Butler’s understudy. Don’t be surprised if Anderson puts up numbers that will more than double his fantasy salary.

8. Jackson Bennett, Ottawa ($2,701): The regular season finale is a chance for Bennett to leave a lasting impression after rushing for 159 yards in the three games since the REDBLACKS turned to him as their lead back. A good outing could set the early stage for him and Devonte Williams ($5,685) to compete for the starting job next May. 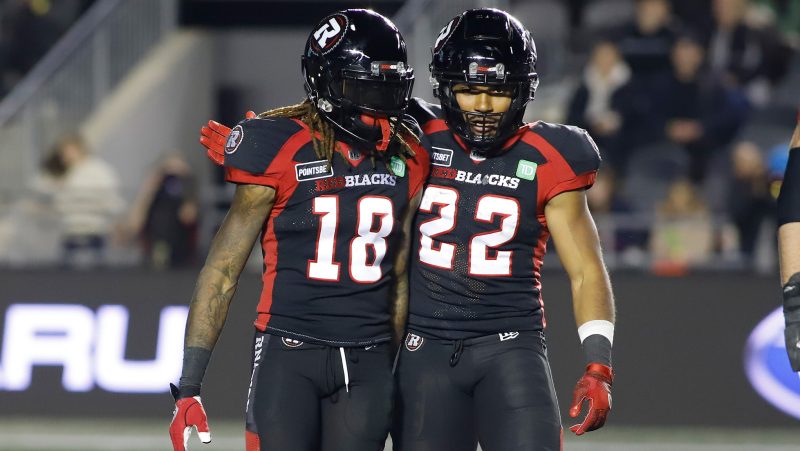 1. Justin Hardy, Ottawa ($5,277): Hardy has been targeted 37 times in his last four games. He has yet to visit the end zone on any of his 38 receptions this season but the presence of Caleb Evans in the lineup greatly enhances Hardy’s chances of scoring a major to close out his impressive season despite being injury-plagued.

2. Jalen Philpot, Calgary ($3,873): The Stampeders continue to find ways to give Philpot the ball, a trend that should continue against the Roughriders. He’s touched the ball 27 times over the past three games as a runner, receiver and return specialist and with his explosive speed, the first-round pick is long overdue to take one long distance, regardless of how the ball ends up in his hands.

4. Brendan O’Leary-Orange, Winnipeg ($2,500): The Toronto native is the one Bombers starter that could see plenty of touches on Friday. Winnipeg doesn’t need Nic Demski ($10,036) nor Dalton Schoen ($10,174) on the field, so look for O’Leary-Orange to take the role of featured target unless the Bombers go out and add…

5. Greg Ellingson, Winnipeg ($8,493): ….He’s backkkkk. Ellingson is practising and will likely see his first action since Week 10 when he hits the field on Friday. Regardless of who’s at pivot, one the Blue Bombers’ goals will be getting the sure-handed vet back into the swing of things. It’s easy to forget that Ellingson was on an All-Star pace before his foot injury sidelined him.

6. Keon Hatcher, BC ($6,268): Hatcher thrived with Nathan Rourke at pivot, scoring double-digit fantasy points in six of his first eight games. For one quarter, look for that pairing to reunite, which will be more than enough to ensure that Hatcher gets the 16 yards he needs to reach the 1,000-yard mark.

7. Jake Wieneke, Montreal ($4,830): Jake From Montreal, Version 2021, finally showed up in last week’s win over Ottawa as he caught five passes for 121 yards and just his second major of the season. He’s ranked this high because it’s doubtful we’ll see much of Eugene Lewis ($9,943) and giving Wieneke the opportunity to follow up his Week 20 performance goes a long way toward the Als matching up against the Argos in next Sunday’s East Semi-Final.

8. Terry Williams, Ottawa ($3,641): Williams leads the league with 2,416 all-purpose yards and will have his share of touches in a regular season finale that should keep him busy regardless of if it’s a game filled with punt returns or one that sees plenty of points scored, which would obviously add a few more kickoff returns. He’s usually good for a touch or two from scrimmage, which only enhances his value this week.

9. Cam Phillips, Toronto ($4,005): Phillips should benefit from the limited play/absence of Kurleigh Gittens Jr. ($9,006) and Markeith Ambles ($6,035). Phillips had five catches for 61 yards on six targets in Week 19 and has produced four games of at least 10 fantasy points, including a season-best 21.4 against Saskatchewan in Week 6.

10. Richie Sindani, Calgary ($3,032): Sure, he had just one catch in Week 20, but it was for a touchdown. Sindani is ranked here because two of his best games this season came when Bo Levi Mitchell was at quarterback, including the 17.1 FP he had in Week 1. The Stampeders have their share of options to spread the ball around, but Sindani feels like the best play.

11. RJ Harris, Ottawa ($4,771): In his first appearance since Week 7, Harris reeled in seven of the 11 targets thrown in his direction. He’s a strong start in the season finale against Hamilton as this could be the springboard toward a big 2023 season for Harris.

12. Kamar Jorden, Calgary ($5,370): Jorden is practising and will return to action for the first time since Week 13. He has not had the type of season we had become accustomed to, yet by giving him enough touches on Saturday, the veteran will be in tune just in time for the Western Semi-Final clash against BC.

Stacktastic Voyage (Oh, This Week Will be Fun!)

Calgary: Dedrick Mills ($4,481), Richard Sindani ($3,032), Kamar Jorden ($5,370). Granted, the changes that result from the final depth chart will alter things, but as it stands, this is a solid foundation to work with. Mills is the anchor while the other receivers can be switched if needed.