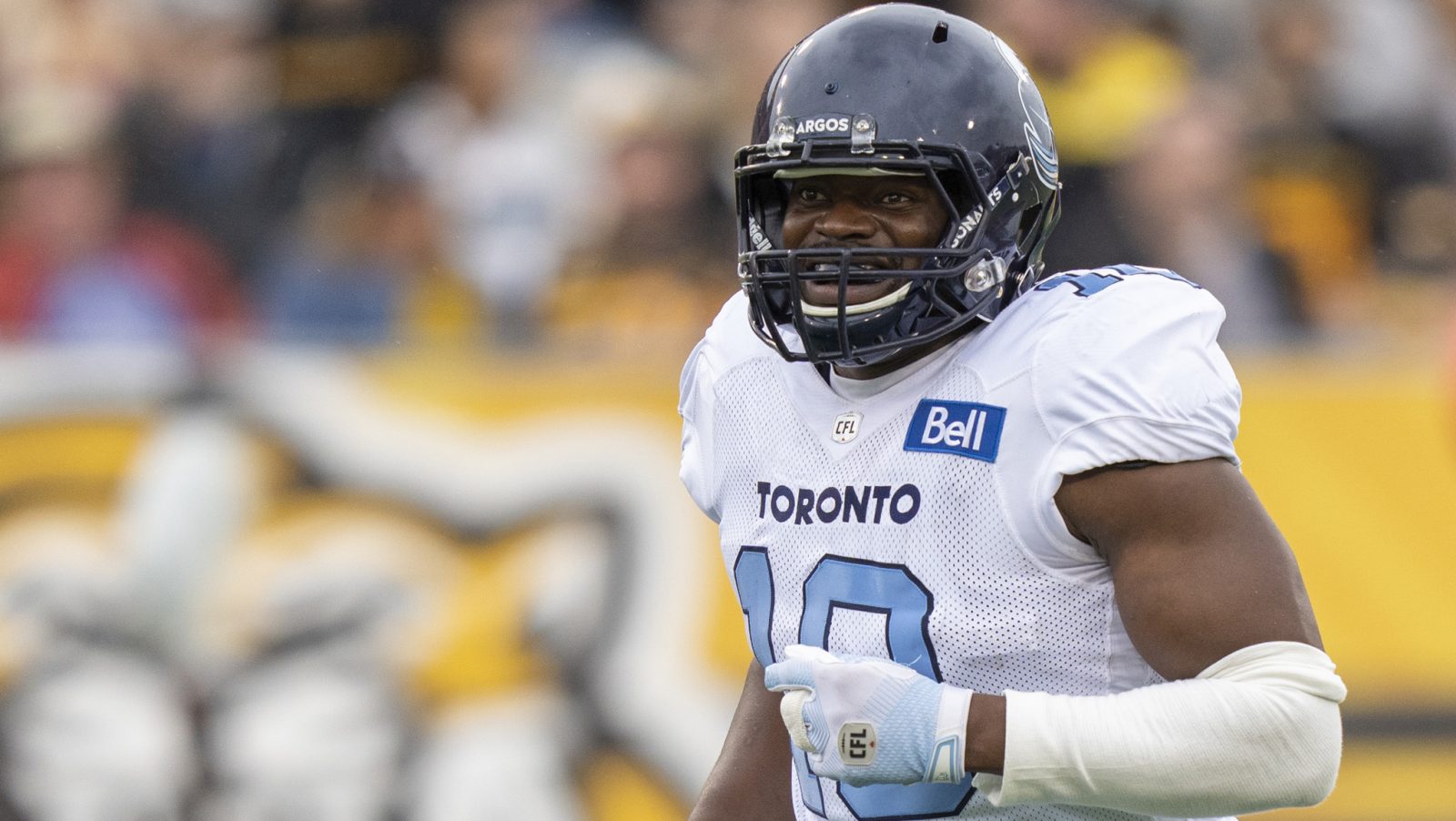 TORONTO — One player from each of the Canadian Football League (CFL)’s nine teams has been nominated for the 2022 Jake Gaudaur Veterans’ Award, which recognizes a Canadian CFL player who demonstrates the attributes of Canada’s veterans: strength, perseverance, courage, comradeship and contribution to Canadian communities.

Presented annually since 2010, the award is named in honour of Jake Gaudaur – a distinguished Second World War veteran and the longest-serving Commissioner in CFL history – who embodied these qualities through his service to the country and the Canadian football community.

The recipient is chosen by a committee made up of Robert Loken and Amanda Brazeau from Veterans Affairs Canada, CFL ON TSN analyst and former Honorary Colonel of 417 Combat Support Squadron, Glen Suitor, CFL Players’ Association Executive Director, Brian Ramsay, and CFL Commissioner Randy Ambrosie. This year’s recipient will be named at the CFL Awards at Conexus Arts Centre in Regina on Thursday, November 17, beginning at 6 p.m. ET.

The CFL Awards are a flagship event of Grey Cup Week as fans, media and the Canadian football community gather in anticipation of the country’s largest single-day sporting event – the Grey Cup. The 2022 Grey Cup Festival opens on Tuesday, November 15 in Saskatoon before moving to Regina from Wednesday to Saturday. For more information surrounding the CFL Awards and additional events, including dates, venues, purchasing details and more, please visit GreyCupFestival.ca.

The 109th Grey Cup will be played in Regina at Mosaic Stadium on Sunday, November 20 with kickoff slated for 5 p.m. local/6 p.m. ET. The sold-out contest will be broadcast across the nation on TSN and RDS – Canada’s home of the CFL.

FIVE MOST RECENT WINNERS OF THE JAKE GAUDAUR VETERANS’ AWARD

BC LIONS – DAVID MACKIE
​Mackie was voted as a team captain in just his second CFL season due to his leadership qualities and his ability to serve as a role model for his teammates. He has tirelessly worked through the rehabilitation process for a toe injury suffered earlier this year, and is preparing for a return to the field. During this season’s labour uncertainty, the native of London, Ont., opened up his gym to players across the league to assist in their training and preparation; he continues to do so for U SPORTS players in support of the next generation of young athletes. The fullback supports The Aboriginal Front Door and the Heart Tattoo Society to help provide thousands of meals each month to Vancouver’s Downtown Eastside via a portable kitchen.

EDMONTON ELKS – TANNER GREEN
​In his fourth season with the team, Green is a hard-worker and leads by example. He missed three games this season, but immediately regained his starter’s role upon his return, starting in 15 games. Despite his time away from the field, he continues to lead the team with 12 special teams tackles. The fullback has shown an incredible amount of support for Girls Tackle Football Recruiting Camps, Hair Massacure and World Down Syndrome Day events. He ran a weekly School of Football offseason program for over 110 young football players in the Central Alberta region.

CALGARY STAMPEDERS – RENÉ PAREDES
​Paredes is the longest-serving member of the team, and he is in his eighth season as a captain. He has not missed a game throughout his 11-year career, despite various injuries and personal loss, including the sudden death of his friend and mentor, Dr. Frank Lodato, last year. The kicker serves as a leader and dedicated mentor for the team’s young special teams unit. He supports the TELUS Friendly Future Foundation, the Educational Partnership Foundation, the Special Olympics and the Calgary Urban Project Society. Prior to every home game, he visits the Alberta Children’s Hospital alongside his teammates.

SASKATCHEWAN ROUGHRIDERS – DAN CLARK
​The 34-year-old veteran team leader suffered a broken fibula and a shifted ankle bone in Week 2. While injured, he remained on the sidelines for every contest, supporting his teammates through a difficult season, in addition to attending all team meetings to share his insight and knowledge. Despite the extent of the injury, he returned in Week 17 following a mentally and physically taxing rehabilitation process. It was his second major injury since 2019, when he was ejected from his car following an offseason community appearance. The offensive lineman champions mental wellness, healthy relationships and anti-bullying across the province, using his own story to inspire others. He is a staunch leader both on and off the field, creating a positive team environment and serving as a mentor for younger players. He has supported many of the Club community programs over his time in Green and White, including work with the Red Cross and Jim Pattison Children’s Hospital. Through the Saskatchewan Roughrider Foundation, he supports Game Changers Playbook – Win with Wellness program and Rider Reading Month, having already visited 20 schools this season in support of youth literacy.

WINNIPEG BLUE BOMBERS – MIKE MILLER
​Miller is a soft-spoken team leader, who is well-respected and deeply appreciated by his teammates. Since joining the team in 2017, he has led the Blue Bombers in special teams tackles in all but one season – 2018, when he finished second. He has missed only four games across his 11-year career. He makes a point of always being available to help special teams players and coaches when not practicing. The fullback supports the Crunchers football program, the Blue Bombers Boys and Girls Club Sleepover at IG Field and the I Love to Read program. Throughout the offseason, he spends time working with young players in his hometown of Riverview, N.B.

HAMILTON TIGER-CATS – CURTIS NEWTON
​Newton had never missed a game since arriving in Hamilton until a torn ACL this season. Despite the season-ending injury, he continued to support teammates and coaches – especially during practice – throughout his rehabilitation process. He battled through early-career uncertainty to firmly establish a role on special teams and went on to be named a team captain. He serves as a leader, providing guidance and support for younger players, while also holding teammates accountable when needed. He was involved with Dane Evans’ Play it Forward initiative and supports Interval House and the Be More Than a Bystander program to help end violence against women.

TORONTO ARGONAUTS – HENOC MUAMBA
​Muamba is one of the league’s longest-tenured players on the Argonauts. He is a vocal leader and frequently takes younger players under his wing. He leads by example, but also through encouragement, strength and positivity, while fostering a team-first mentality. He helped transition the team through new coaches and a new defensive coordinator this season, and he remained a consummate teammate and professional, despite the challenges of welcoming his third child this season. He played through pain and multiple injuries this season, but has not missed a game. He started a Back-to-School Drive for students who are new to the city or province. He supports MLSE Huddle Up and MLSE Launch Pad, while running two youth mentorship programs – Muamba’s Perfect 10 and the Eagle Vision Program. He started a campaign for blood cancer awareness, raising funds for the Leukemia and Lymphoma Society of Canada.

OTTAWA REDBLACKS – BRENDAN GILLANDERS
​Gillanders is a determined and vocal team leader. In 2021, he was injured on the first play of his 100th career game and underwent season-ending surgery. This season has been his comeback campaign, and he reaffirmed his position as a strong locker room presence and influence for his younger teammates. He supports young player development, school visits, Women’s Training Camp and the Gourmet on the Gridiron program.

MONTREAL ALOUETTES – LANDON RICE
​Rice broke through in 2021 to become a starter, following years as a back-up, to become an East Division All-Star and the team’s nominee for Most Outstanding Offensive Lineman – an honour he received once again this year. He has played through multiple injuries this season, but continues to be a committed team leader. In the offseason, he works in his own construction company, and he continues to support current and former teammates by offering them employment. He is a volunteer coach and security guard, while also using his unique skillset to support his loved ones and the community – by building a playground at his children’s daycare.