Numbers Don’t Lie: 3 Stats that could define the Eastern Semi-Final

Numbers Don’t Lie: 3 Stats that could define the Eastern Semi-Final

TORONTO — Stat-surfing and analytics have become part of the fun of football, fans can see how well their favourite players or teams are performing and who is leading the league in otherwise tight statistical race. They also have the ability to give insight into certain team trends, or help tell a story specific to a matchup.

With that in mind, let’s dive into three stats that could define the Eastern Semi-Final as the Hamilton Tiger-Cats and Montreal Alouettes prepare to meet for their fourth, and most important matchup of the season.

305 – yards against the Ticats

Admittedly, this one feels a little bit obvious, but the caliber at which Montreal’s Eugene Lewis has been playing throughout 2022 has been remarkable, especially against the Ticats.

Over the course of the last few regular seasons Lewis has proven to be one of the most electrifying pass-catchers in the league. In 2022, the Montreal wideout reached new heights as he finished the regular season with 1,303 receiving yards, 91 receptions and 10 touchdowns, setting new career-highs in each category. Montreal also happens to hold a winning record in games where Lewis has scored a touchdown.

When matching up against the Black and Gold this season, Lewis has reeled in 22 passes for 305 yards and three touchdowns, while averaging almost 14 yards per reception. The Als playmaker has also recorded two of his six highest receiving totals this season, including a season-high 154-yard performance in Week 8.

More important than the yardage, is the fact that Lewis is helping Montreal find wins against the East Division rivals. The Alouettes have beaten Hamilton in two of their three meetings this season and in each win Lewis has recorded at least one receiving touchdown. Montreal’s only loss to the Ticats this season was a seven-point loss in Week 8 and it was the only game where Lewis failed to find the end zone. 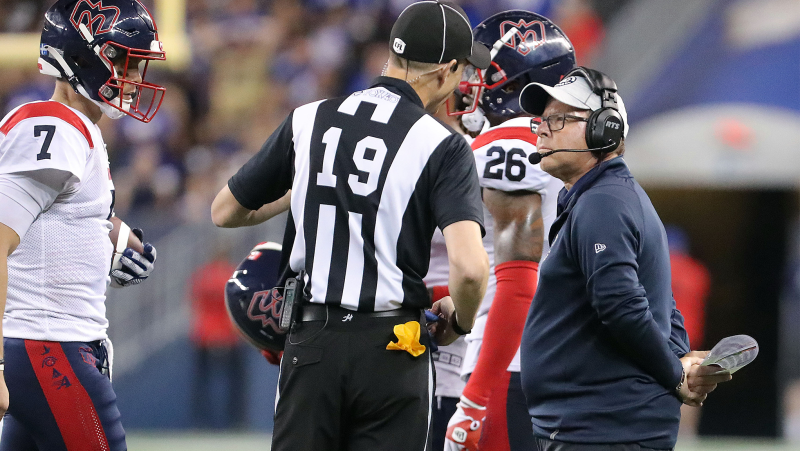 The Montreal Alouettes are the third most penalized team in the CFL, having been flagged 155 times and no team has given up more yardage in penalties than Montreal (Jason Halstead/CFL.ca).

From youth leagues to the professional game, coaches everywhere preach discipline and limiting hidden yardage due to penalties. At first, 10 or 15 yards here and there seem minor in the grand scope of the game, but when accumulated in large quantities, penalties often become detrimental to a team’s success both offensively and defensively.

The Alouettes have surrendered a grand total of 1,574 yards to penalties this season, the most of any team in the CFL. Defensively, Montreal has been flagged 82 times this season, which is the most of any defence in the league. Remaining poised on the defensive side of the ball becomes especially important for the Als entering the Eastern Semi-Final.

On average Hamilton begins their drives from near their own 35-yard-line, one of the worst starting field positions across the CFL. However, they are a resilient group that has shown a knack for methodically driving the field. Should the Alouettes hope to take advantage of the Ticats’ less than favourable field positioning, limiting penalties defensive penalties that help to sustain offensive drive becomes critical.

Defence and Hamilton have become almost synonymous over the last few season of league action. The Black and Gold have become a revered unit that have proven to pinpoint the strength of an opposing offence and negate their ability to make plays.

The Ticats have excelled at taking the ball out the hands of of opposing quarterbacks this season, boasting 19 interceptions during the regular season, tying them with the Calgary Stampeders and the BC Lions for the second most in the league.

Hamilton’s interception efforts have been led by strong-side linebacker Kameron Kelly, who is tied with BC’s Garry Peters for the second most interceptions in the CFL this season. While defensive backs Richard Leonard, Jumal Rolle, Tunde Adeleke and Ciante Evans have each recorded at least one takeaway this season.

The task of creating turnovers will be pivotal to the success of the Ticats, especially with Trevor Harris quarterbacking the opposing Alouettes. Harris has thrown just 12 interceptions this season, and has thrown only one interception over his last five appearances.

However, in their win over the Stampeders in Week 19 the Ticats secondary forced the ever-efficient Jake Maier to throw three interceptions in the game’s first half, just his second multi-interception game of the season and the most he’s thrown in 2022.