TORONTO — The electrifying energy and alternative pop anthems of Valley have been tapped to fill Saskatchewan’s Mosaic Stadium to open the 109th Grey Cup – the country’s largest single-day sporting event. The Canadian Football League (CFL) will welcome the JUNO Award-nominated quartet as the headliners of this year’s SiriusXM Grey Cup Kickoff Show.

“What an absolute honour to take the stage at this year’s Grey Cup,” said lead vocalist Rob Laska. “A sold-out show in front of an entire stadium filled with diehard Canadian football fans is the perfect way to cap off an incredible year for our band. We’re going to give it our all, and we can’t wait to hear the passion and pride of CFL fans!” 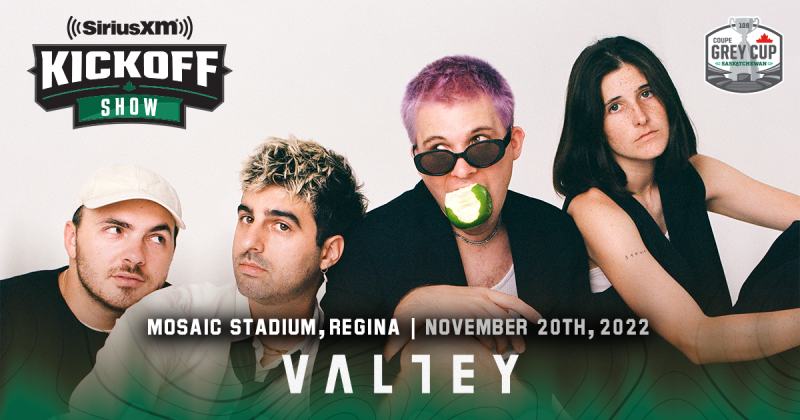 Valley’s latest single, “The Problem Song,” was released in late-September and marries the theme of renewed optimism with the band’s signature sound. Valley burst onto the Canadian indie-alternative scene with 2016’s This Room is White EP, before making their full-length debut with 2019’s MAYBE, which included the hit single There’s Still a Light in the House. Their early efforts were recognized with a 2020 JUNO nomination for Breakthrough Group of the Year.

Their follow-up EP – 2020’s sucks to see you doing better – signalled the band’s arrival on the international stage with the certified GOLD single, “Like 1999,” breaking through to chart in the U.S., Philippines, Korea, Japan and more, as well as, “homebody,” which saw the group named a finalist for the 2021 SOCAN Songwriting Prize. Their 2021 record, Last Birthday, received accolades from EARMILK, Wonderland and American Songwriter.

Following a nearly sold-out North American headlining tour and support slot with fellow Canadians, Arkells, taking centre stage at the SiriusXM Grey Cup Kickoff Show will be the band’s latest honour in a year in which they also received their second JUNO nomination – this time, as Group of the Year.

“We’re so excited to have Valley take the SiriusXM Grey Cup Kickoff Show stage,” said Paul Cunningham, Senior Vice President, Sales & Marketing at SiriusXM Canada. “Music and football go hand-in-hand, and there’s no bigger stage than Grey Cup to showcase one of Canada’s newest and brightest bands. It’ll be a special night to remember – not only for Valley, but also every fan of Canadian football and Canadian music.”

The 109th Grey Cup from Mosaic Stadium in Saskatchewan will air live on Sunday, November 20 with kickoff slated for 5 p.m. local/6 p.m. ET. The sold-out championship contest will be broadcast across the nation on TSN and RDS – Canada’s home of the CFL, as well as on SiriusXM’s Canada Talks (ch. 167).

The 2022 Grey Cup Festival opens on Tuesday, November 15 in Saskatoon before moving to Regina from Wednesday to Saturday. For more information surrounding the festival, including dates, venues, purchasing details and more, please visit GreyCupFestival.ca.