MONTREAL — Four games into a new coaching regime and sitting on a 2-6 record it may have looked like things were unravelling for the Montreal Alouettes.

A week earlier, they’d lost 38-24 at home to the Winnipeg Blue Bombers. On Aug. 11, they were in Winnipeg, wrapped up in a tight battle with the then-undefeated, two-time defending Grey Cup champs. Still, expectations from those watching across the country weren’t high.

“It was a rough start, but that game in Winnipeg really changed a lot,” Alouettes safety Marc-Antoine Deqoy recalled after his team’s practice on Friday.

“You felt it in the locker room. We beat the team that was undefeated and they have the best record this year. It showed that we can play with any team. In the CFL, sometimes in a one-game playoff it’s the best team that day. It’s a good confidence to have. Now we just have to execute.”

That 20-17 overtime win lifted the Alouettes to 3-6, starting a long but successful climb up the East Division standings. The Als went 6-2 to get back to .500 and finished the regular season at 9-9. They’ll host the Hamilton Tiger-Cats at Molson Stadium on Sunday in the Eastern Semi-Final. 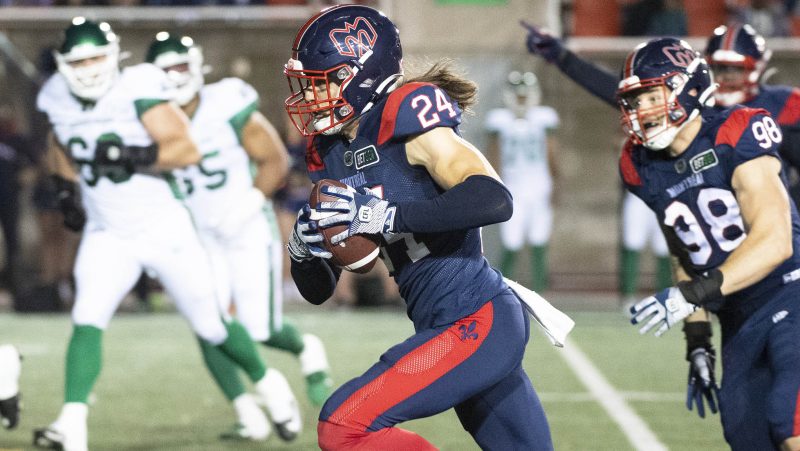 They wrapped up their last full practice of the week with a high energy effort on Friday, with their defence cheering itself on as it worked against quarterback Trevor Harris and the Alouettes’ offence.

“It’s been fun,” Harris said of the ride the team has been on this season. He assumed No. 1 QB duties in Week 2, which eventually led to Vernon Adams Jr. being traded to the BC Lions.

“When you look back, I think a lot of times the character of teams is revealed and built through those times. We were 2-6. A lot of people thought, ‘Oh, they’re done.’ But I’ve been in this league for a long time and I could feel that this team was different and that we were going to get it together. It was just a matter of us putting it together up here,” he said, pointing to his head, “and having the power of belief.”

An early-season coaching change — general manager Danny Maciocia relieved head coach Khari Jones and defensive coordinator Barron Miles of their duties on July 6 — can provide a reset in both good and bad ways for a team. There is a fresh start for a team that wasn’t happy with its record, but it also meant changes to defensive scheme, with veteran coordinator Noel Thorpe coming aboard, and the changes that Maciocia, who is working this season as the interim head coach, brought to the offence.

“It’s a new D.C. so it’s a new defence,” said Dequoy, who led the team with four interceptions this season and was the Alouettes’ nominee for Most Outstanding Canadian player.

“Those first games (under new coaching) are like pre-season games.”

To help ease the coaching transition and to try to help his team climb back up the standings, Maciocia encouraged his players to meet on their own, regularly throughout the season.

“I would say that that extends itself even beyond the game of football, because there are a lot of parallels that you can make with what people do every single day in their respective workplace,” Maciocia said of the meetings.

“I think they’re they’re extremely valuable, those type of interactions. You have an opportunity to sit down, you’re able to communicate with with your peers. What I really appreciate the most is that whenever we talk about having certain issues or certain problems or whatever, you’ve got to bring a solution to it. So there’s positive dialogue and more often than not, you’ll always find a solution.”

“Some of the best player meetings that I’ve been a part of especially because I have a bigger leadership role now. It got a lot of guys saying a lot of good things, a lot of motivation. And just just just getting guys fired up, man, we feel excited.”

“Really what this is about,” Harris added, “is that player environment and having that sort of environment to say what you need to say. Sometimes early in the year when I called the players’ only meeting there were tough things that were said. But it was stuff that we needed to hear. There’s accountability and that’s what you can do with family, you can hold each other accountable.”

Early in the season especially, that sometimes involved players frustrated with what they were seeing from parts of the team that they weren’t on asking for those players to be better.

“I think that there were good conversations about that and (players) saying their appreciation,” Harris said.

“To have that ability to hold each other accountable, to have those tough conversations and not be offended shows how close this team really is.”

On Sunday, after salvaging their season and erasing their slow start, the Als will defend their home turf in the Eastern Semi-Final against a Tiger-Cats team that’s given them trouble in the playoffs. As the Montreal Gazette’s Herb Zurkowsky pointed out this week, Hamilton has topped the Alouettes seven straight times in the post-season since the Als’ rejoined the CFL in 1996.

Dequoy, a local player that suited up for the Montreal Carabins in U SPORTS, is more than ready to end that streak.

“I’m looking forward to it. It’s something that’s incredible, just me playing with the Alouettes, ateam that I watched growing up. I’ve been a fan since I was a kid,” he said. “It’s special and I’m really proud to be there and hopefully we can get that win and make the city of Montreal proud.”