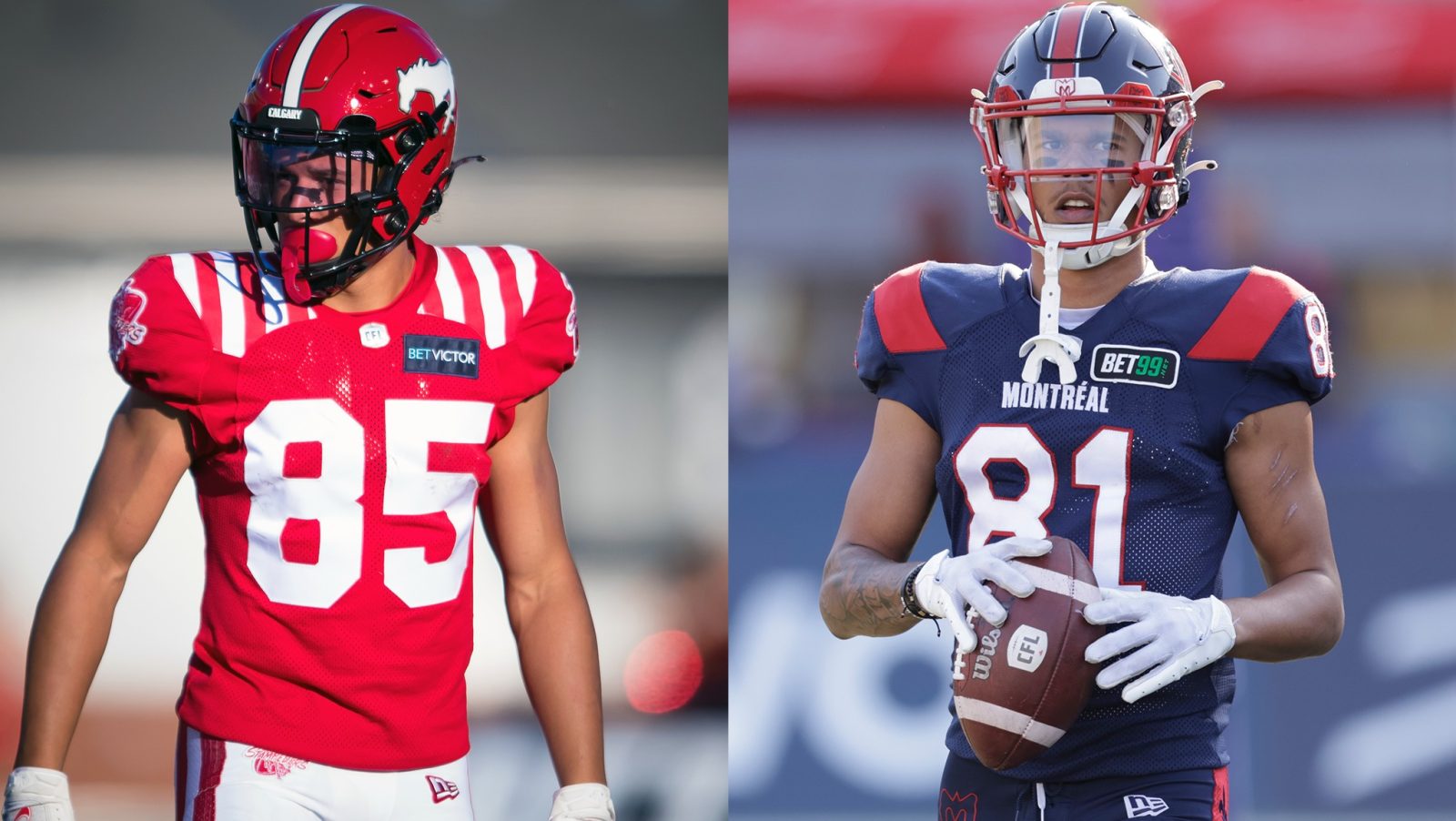 Around this time last year all the buzz surrounding the 2022 CFL Draft was around two sets of twins.

The Ford brothers, Tre and Tyrell,  were wrapping up their illustrious careers as a quarterback and defensive back respectively for the Waterloo Warriors. Tre Ford was drafted eighth over all by the Edmonton Elks, while Tyrell Ford was drafted 13th overall by the Winnipeg Blue Bombers, each would go on to play in a handful of games this season.

The Philpot brothers were also involved in many draft conversations and as hype built towards the CFL Combine presented by New Era, it seemed there might be a bidding war of players and picks. With team’s maneuvering their boards to see how high they could move up to select one, or both of the talented Calgary Dinos pass-catchers.

As I sat on the CFL on TSN draft show the BC Lions were on the clock and I thought their Philpot of choice would inevitably get taken as one of the Delta, BC born duo could immediately support Lucky Whitehead, Bryan Burnham and first-year Canadian starting quarterback Nathan Rourke.

BC went with Saskatchewan Huskies defensive lineman Nathan Cherry with the third pick in the draft. With the fourth overall selection Edmonton drafted Coastal Carolina defensive back Enock Makonzo.

With the Calgary Stampeders holding the fifth overall pick, Jalen Philpot came off the draft board, forever earning the bragging rights over his brother as the first to be drafted.

However, just four picks later, Tyson Philpot would hear his name called, as the Montreal Alouettes selected Philpot with the ninth pick, closing out the first round of the 2022 CFL Draft.

The CFL season has a way of twisting and winding through the summer sun to autumn chill and after 21 weeks of regular season football, we all of a sudden land at the doorstep of the post-season. In the journey towards the biggest games of the year, I often find we fail to pause and reflect on the incredible storylines that surround this game.

With Jalen’s Stampeders and Tyson’s Alouettes suiting up in do-or-die playoff games on Sunday, we need to stop for a moment and reflect on the talented tandem’s rookie season.

From their college career number to CFL combine testing, there was little to separate the two other than their hairstyle and their jersey numbers. Now that they in differing offensive systems, coached by new names and joining new teammates in the pros, Jalen and Tyson have begun to carve out what their CFL legacy could look like when it’s all said and done.

While Tyson played in all 18-games, Jalen suited up for 14 matchups. Pretty impressive for a pair of 1st round draft picks, not to mention twins.

Tyson got more of Montreal’s passing targets than Jalen did Calgary’s, while Jalen had the deeper average depth of target, but when looking at yards after catch, Tyson did more with the ball in his hands. With one more touchdown Jalen has the superior touchdown percentage when targeted and added more carries and return yards, as both Philpots were used in the special teams game at various points this season.

Any given week either of the two could look like one of the best young Canadian pass catchers across the league, with their mother Colleen Purcell, and sometimes even the brother who doesn’t have a game to play watching from the stands as football continues to be a family affair. 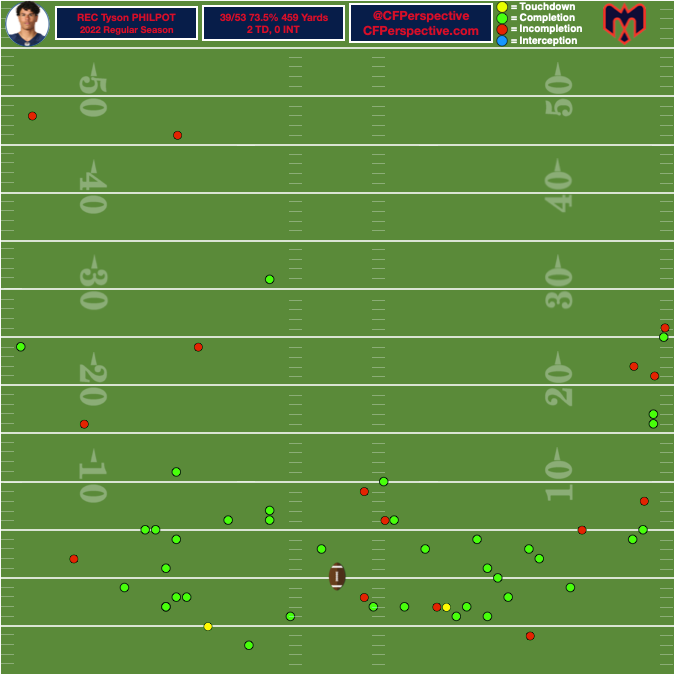 Looking at Tyson and Jalen’s target charts for the year the difference in their usage is quickly apparent.

Within the Montreal offence, Tyson has primarily been utilized close to the line of scrimmage and tightly packs his targets towards the middle of the field.

In Calgary under the Bo Levi Mitchell and Jake Maier led Stamps attack, Jalen’s chart looks like a firework exploding from Tyson’s as he has been asked to play a slightly more diverse offensive role. 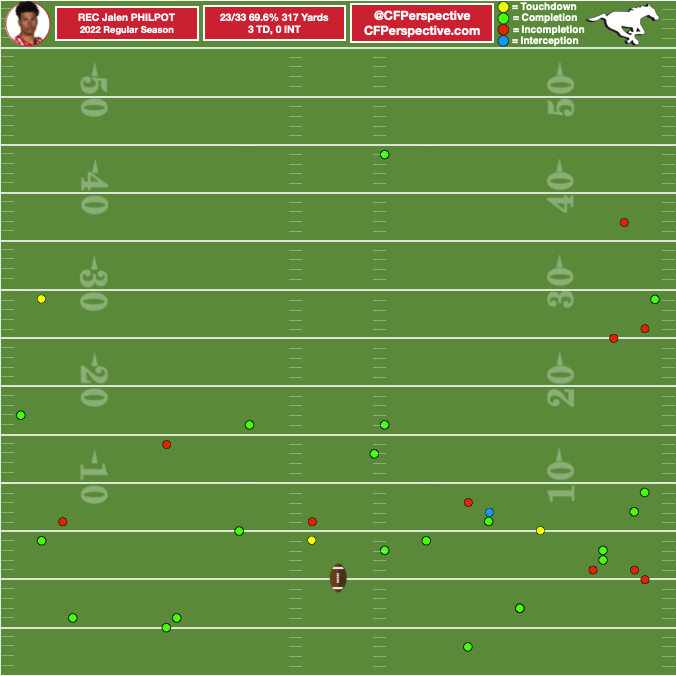 With the Alouettes hosting the Hamilton Tiger-Cats in the Eastern Semi-Final and the Stampeders travelling to Vancouver for the Western Semi-Final, the twin’s mother has it tough this week, even saying on twitter she wished she could be in two places at once.

The pair of playmakers have transitioned from young CFL fans to playoff-ready rookie contributors in what must feel like the snap of a finger to their family and ever growing fan club.

As for the brotherly rivalry, Jalen told Stampeders.com that it will continue this weekend.

“We definitely have a little wager going on who is going to make it farther, so that was the first one and best of luck to Montreal and him, they’ve got a good shot out there too, to see us in the Grey Cup,” Jalen said. “We’re both in the playoffs, it’s (all) we both could have asked for in our rookie year so we’re both just excited.”

While Jalen was drafted ahead of Tyson, the ultimate first year bragging rights of a potential Grey Cup still hang in the balance with kickoff for the Division Semi-Final matchups less than 24-hours away.