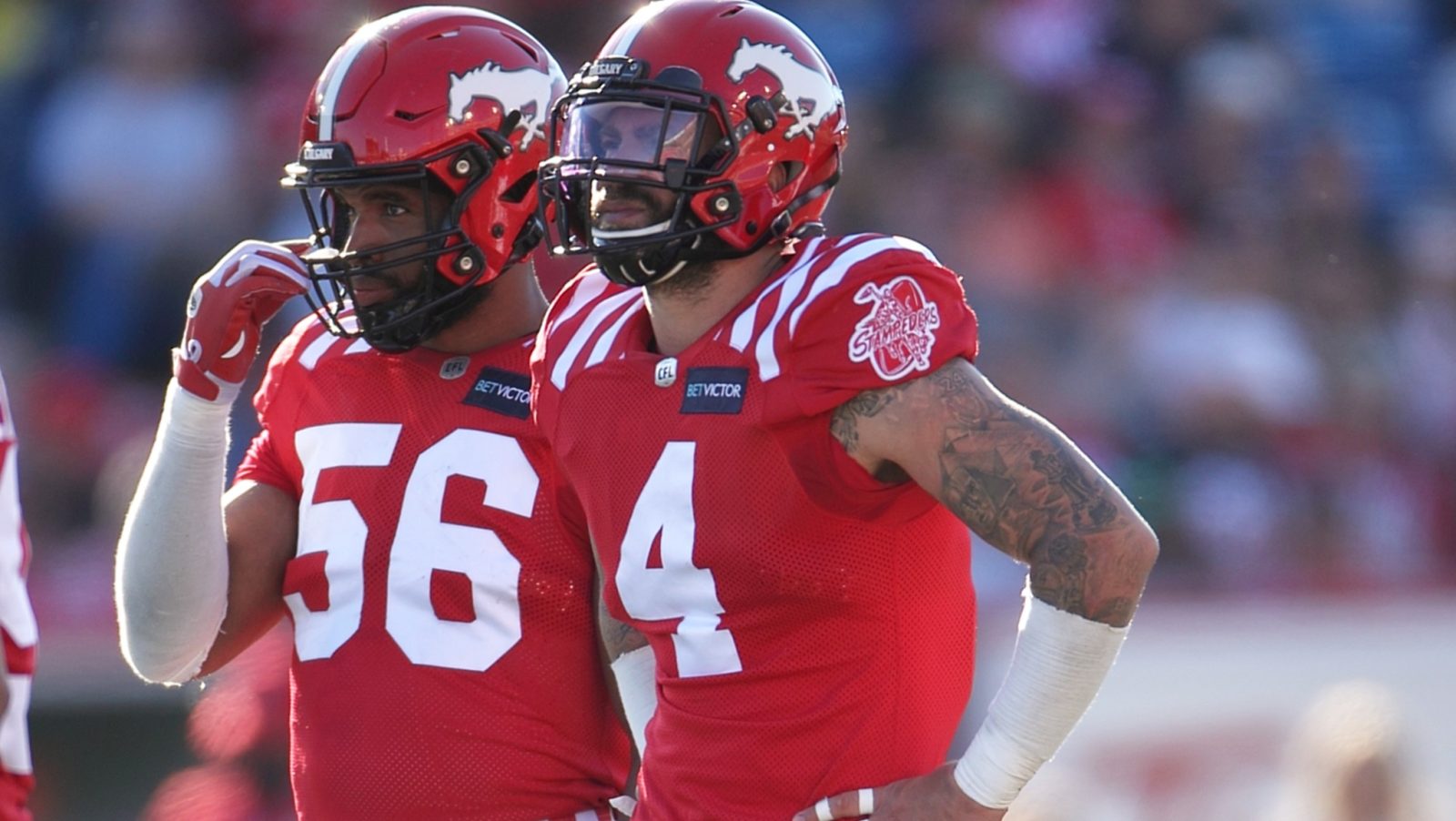 During a game Calgary Stampeder linebackers Cameron Judge and Jameer Thurman can make it look easy.

They each seem to understand what the other is thinking. They know when to gamble on an interception, stay with a receiver, go hunting the quarterback or come up to the line to stop a running back.

Playing within one of the CFL’s best defences, the pair lead the Stampeders in tackles while combing for five interceptions and four forced fumbles. As a unit the Stampeders defence forced 46 turnovers this season, the most of any team in the West and finished the regular season with a league-leading plus-21 turnover ratio.

What looks to come naturally on game day, begins in the film room and on the practice field during the week.

“Through the week we talk about it,” said Thurman. “Teams have different game plans. We’re studying our opponents. As things go along, we start to see tendencies and then we talk about it on the field.

“There’s a lot of communication pre-snap. When guys start taking chances, are trying to make plays, when we see what they’re doing, we can cover each other and we play a lot better.”

Judge didn’t fully appreciate the cohesion he felt with Thurman until Calgary’s middle linebacker missed three games with a knee injury during the season.

“There’s a couple of games Jameer missed,” said Judge, the weak side linebacker. “I don’t know if you could tell watching, but on the field, you could definitely feel a difference without his leadership and communication out there.

“That was when I realized it was something I had to grow in my game. Not having him it really showed how crucial and important communication is.”

The play of Thurman and Judge will be a key in stopping the BC Lions’ high-octane offence when the Stampeders travel to Vancouver for Sunday’s Western Semi-final at BC Place.

The Lions can also grind it out in games on the ground with running back James Butler who finished with 1,060 yards, just 28 fewer than Calgary’s Ka’Deem Carey, who won the rushing title.

“At the end of the day we are more focused on ourselves,” said Thurman. “We know who they are, they know who we are. It’s all about execution and going out there.”

Both teams finished with 12-6 records, but the Lions earned second place in the West with two wins over the Stampeders. Each of those games were decided by two points or less, with one being decided in overtime.

Rourke missed the final two games against Calgary with a foot injury, including the Stampeders 25-11 victory in BC Place in Week 16.

The six-foot-two, 235-pound Judge led the Stampeders with 80 tackles this year while Thurman was second with 74.

“I don’t think either one of us really focuses in on the tackles,” said Thurman. “We look at more impact plays like interceptions, fumble recoveries and sacks.”

Judge, who was born in Montreal and lived in both Vancouver and Victoria before his family moved to California, was named a West Division All-Star after collecting five sacks and two interceptions, one of which he returned for a touchdown. He also had two forced fumbles, and five fumble recoveries, one resulting in a touchdown.

Teammates on the field, Thurman and Judge are friends away from the gridiron.

“We both like our alone time,” said Thurman. “We also went to a (Calgary) Flames game together. We hang out all the time.”

Thurman, who played his college football at Indiana State, was part of the Stampeder team that won the 2017 Grey Cup.

“That was one of the greatest moments in my football career,” he said. “I understand the thing that we need to do, the demands and the execution we have to have.

“I just want to share that with the guys on the team. We have a very good team and we are very capable of winning it all.”

Judge, who attended UCLA, joined the Saskatchewan Roughriders in 2017. He played three seasons with the Riders and was the West Division finalist for the CFL’s Most Outstanding Canadian award in 2019.

He signed as a free agent with Toronto in 2021 and dressed for nine games, including the Eastern Final. He came to Calgary in a February trade in exchange for defensive back Royce Metchie.

Thurman admitted he had some questions about the trade.

“At first I was curious, based on the year (Judge) had in Toronto,” he said. “But when he got in the building, everything went smoothly. It was like we just picked it up.”

Judge said that he didn’t know what to expect coming to Calgary, but it didn’t take long to adjust.

“When I got here, within my first day or two, I felt pretty comfortable,” he said. “The guys were all really welcoming.

“I could tell their mind was on winning games. It was pretty easy to fall in line with that.”

Judge’s father Douglas Judge played football at Oregon before becoming an actor. He had a feature role in the TV series Stargate SG-1.

Considering the presence he brings to the football field it would seem natural for Cameron Judge to want to follow in his father’s footsteps as an actor.

“I’m kind of nervous in front of a camera,” said he said. “I’m a lot more comfortable playing football than trying to be someone who I’m not.”

However, Judge will have the opportunity to make plays on the national stage as the Stamps prepare for their Western Semi-Final matchup on Sunday.