Lions defeat Stampeders to move on to Western Final 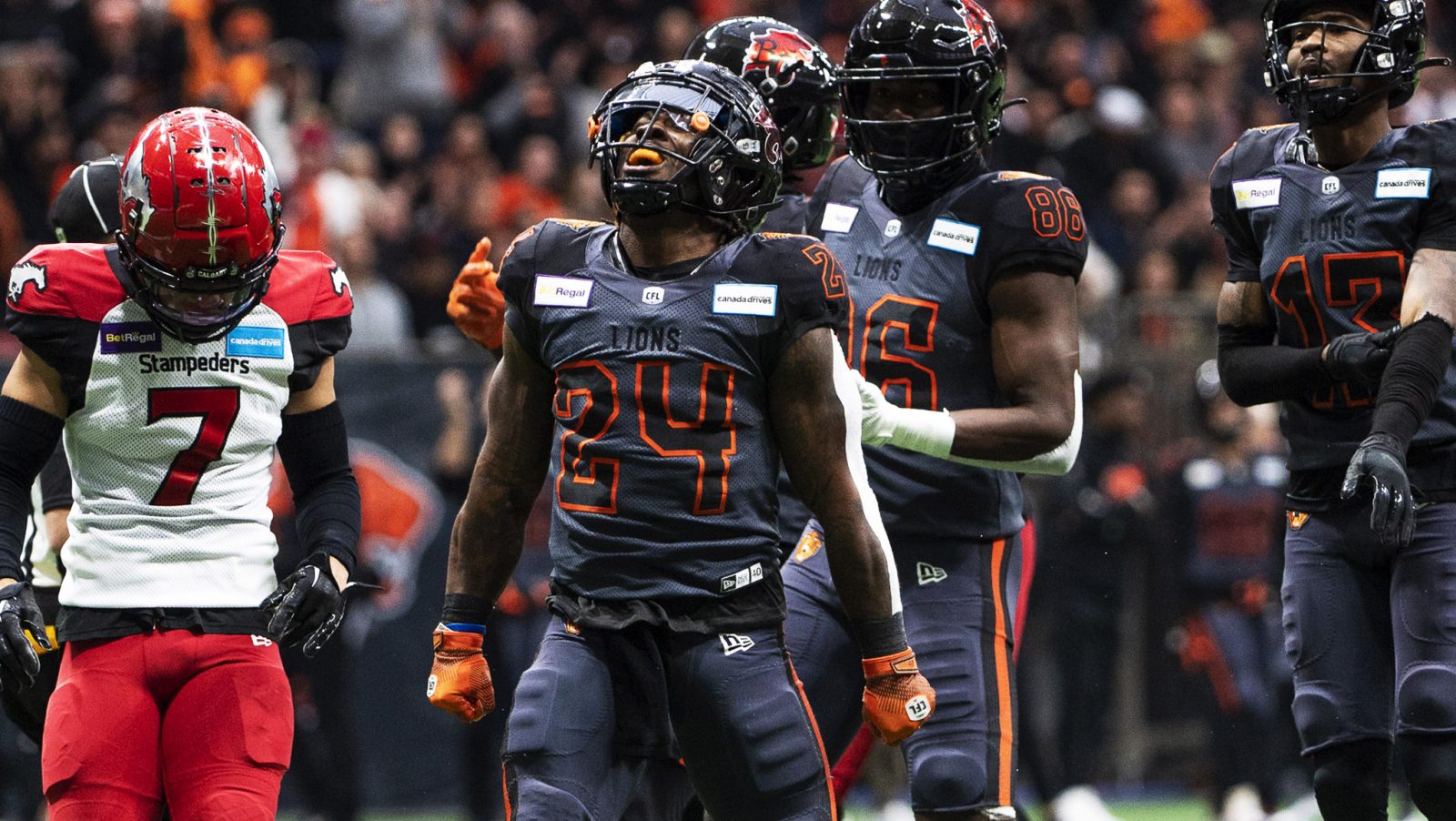 Lions defeat Stampeders to move on to Western Final

VANCOUVER — The BC Lions are heading to the Western Final.

With their 30-16 win over the Calgary Stampeders on Sunday, the Lions have advanced to the next round of the CFL Playoffs where the Winnipeg Blue Bombers await.

Keon Hatcher, Bryan Burnham, and Alexander Hollins scored touchdowns for the Lions in the winning effort while Nathan Rourke threw for 321 yards and two majors. Antonio Pipkin also threw for a touchdown in his team’s victory.

Hatcher led all receivers with 162 yards on eight catches while James Butler rushed for 95 yards on 20 carries. Malik Henry also went over 100 yards with 119 on seven catches for the Stamps.

Rene Paredes connected on all three of his field goal attempts in the Stampeders loss while Jake Maier threw for 138 and no touchdowns. Bo Levi Mitchell threw for 147 yards, connecting on eight of 11 passes.

The Stampeders scored the first points of Sunday’s Western Semi-Final. Rene Paredes was good on his 32-yard attempt to put the visitors in the lead. The nine-play, 44-yard drive was highlighted by a 15-yard pass to Malik Henry as Calgary got settled in at a rowdy BC Place.

On the Lions ensuing drive, BC was finding success from their ground attack. Butler first caught a pass out of the backfield for eight yards, then Antonio Pipkin came in for a quarterback sneak for a first down followed by Nathan Rourke calling his own number and running for five yards.

On the next play, a defensive pass interference penalty on Jonathan Moxey brought the Leos down to the Stampeders 36-yard line. The Lions went right back to Butler, as the running back scampered for back-to-back gains of seven and 24 yards, respectively. But after a run for a loss of three yards from Butler and an incomplete pass to Cottoy, BC settled for a 15-yard field goal from Sean Whyte. The score was tied 3-3 with almost six minutes left in the first quarter.

The Stampeders started to move the chains on their next drive, starting with an 18-yard pass to Malik Henry followed by a nine-yard pick up from Reggie Begelton. A few plays later, the team gambled on third and one and got the first down with a Tommy Stevens QB sneak. They tried their luck again a few play later on third-and-two, but ended up turning the ball over on downs. Stevens looked poised to take the QB sneak once again, but he handed off to Henry, who ran around the edge where the Lions defence was there to stop him.

BC added another field goal the next time they hit the turf. The 10-play scoring drive started at the end of the first quarter and finished up as the second quarter began. Whyte was good on his 41-yard attempt and the Lions took a 6-3 lead with just over 12 minutes left in the half.

Calgary looked to respond with a score of their own but started their drive with a too many men penalty, pushing them back 10 yards. The Lions defence held strong on the possession, forcing the visitors to a two-and-out as David Menard took down a scrambling Maier on second and 18 to force the punt.

The Stampeders defence responded with a big play of their own, as Folarin Orimolade knocked the ball out of Butler’s hands and Moxey recovered it, bringing Maier and co. right back onto the field.

Calgary capitalized on the turnover with another field goal as Paredes knocked his 28-yard attempt through the uprights. That score tied things at six with four and a half minutes left in the first half.

The first touchdown of the contest came inside the three minute warning. After Rourke found Keon Hatcher for a 25-yard catch-and-run, the Lions pivot then found Alexander Hollins in the back corner of the end zone for the 13-yard major score. With the completed convert, BC took a 13-6 lead with 2:36 left on the clock.

There would be no more scoring for either team as they headed to the locker rooms for halftime.

With the ball at their own 30 to start the third quarter, Rourke connected with Dominique Rhymes for a 37-yard gain. But after a three-yard rush from Butler, the Stampeders defence stood tall as Orimolade recorded his second sack of the game on Rourke, forcing BC to punt.

Calgary started to gain some momentum on their next drive, a drive that was highlighted by a pair of running backs (32-yard catch-and-run from Ka’Deem Carey and a 15-yard run from Dedrick Mills). After back-to-back passes to Henry for 11 and seven yards, respectively, and a one-yard run from Mills, the Stampeders decided to go for it on third down. Maier’s pass attempt to Henry was incomplete and Calgary turned things over on downs on the BC 18-yard line.

The Lions capitalized on the turnover with their second touchdown of the game as Rourke and the offence moved the chains down the field and into Stampeders territory. On third and one, Pipkin entered the game and lined up as if he was going to go for a sneak, but the Lions dug into their bag of tricks on the play. Pipkin faked the handoff and then passed to a wide open Hatcher, who ran untouched into the end zone for the 45-yard score. With the completed convert, BC took a 20-6 lead with four minutes left in the third frame.

With 11 minutes left in the game, the Stampeders made a change at quarterback and Bo Levi Mitchell took over behind centre. His first pass was complete to Henry for a 30-yard gain. Mathieu Betts knocked down Mitchell’s next pass attempt, bringing up second-and-10 before the Stamps pivot found Begelton for a 10-yard gain and a first down.

A 21-yard gain by Luther Hakunavanhu followed by a 29-yard completion to Henry brought the Stampeders down to the Lions eight-yard line. On the next play, Betts took down the Stampeders QB for the sack bringing up second and long. An incompletion to Carey brought up third down and Paredes connected on his 24-yard field goal. The score cut BC’s lead to 20-9 with just over seven minutes left.

Rourke and co. went to work on their next possession, moving the chains to set up a Bryan Burnham touchdown. On second-and-seven on the Stampeders 10-yard line, Rourke found the Lions veteran receiver in the back of the end zone for the major score. Along with the convert, the Lions added to their lead (27-9) with just over three minutes left in the game.

On the Stampeders next drive, Mitchell and co. moved down into Lions territory. A pass interference call on Jalen Edwards-Cooper, who was covering Hakunavanhu in the end zone, brought Calgary to BC’s one-yard line.

That appeared to set up a one-yard touchdown by Carey, but after it was reviewed by the command centre, the Stamps running back was down before he crossed the goal line. Tommy Stevens then entered the game and was good on his QB sneak attempt for the one-yard touchdown. With the completed convert, the Stamps cut the Lions’ lead to 27-16 with a minute and half left on the clock.

Calgary attempted an onside kick but it was recovered by the Lions, bringing Rourke and the offence back to the field.

Whyte connected on his 15-yard field goal with less than 30 seconds left and that would be the final scoring play of the game.

The Lions now set their sights on the Winnipeg Blue Bombers in the Western Final next Sunday at IG Field.