3 storylines to watch in the Western Final

3 storylines to watch in the Western Final

The dust is slowly setting on the 2022 CFL season and with just four teams left standing, fans will get the matchup that they’ve hoped for all year in the Western Final.

The Winnipeg Blue Bombers will begin their quest for a history-making three-peat of Grey Cup titles on Sunday when they host the BC Lions at IG Field. This is a meeting of the two best records in the West Division and a meeting of the present, in the two-time defending champion Bombers, taking on the future in a BC Lions team led by first-year starter/QB wunderkind Nathan Rourke.

The Bombers took two out of three games in their regular season series against the Lions, though the games were sprinkled with asterisks due to injuries and scheduling. They collided in Week 5 as two undefeated teams, with Zach Collaros out-dueling Rourke in a 43-22 Bombers’ win.

When they met again in Week 19, the Bombers had already clinched the West Division and head coach Mike O’Shea opted to rest Collaros, who watched from the sidelines as the Lions took a 40-32 win at BC Place. Vernon Adams Jr. played in place of the injured Nathan Rourke.

They had their third meeting in Week 21 at IG Field to close out the regular season. Rourke made his return to action after being injured 10 weeks earlier, playing a very limited amount and throwing just 11 passes. Collaros did the same, going 4-5 for two touchdowns before checking out of a game that the Bombers won, 24-9.

Here are three storylines to follow as the Bombers and Lions meet for the fourth time this season, with a trip to the 109th Grey Cup on the line.

2022 CFL PLAYOFFS
» 109th Grey Cup Divisional clashes set
» Rourke on Lions’ win: ‘It wasn’t pretty but we got it done’
» Head To Head: Who has the edge in the Western Final?
» Make your Eastern and Western Finals picks and you could win $1,000 cash

Our main man Marshall Ferguson laid it out well in his Head To Head column on the Western Final. This highly anticipated QB battle may not be what we saw even back in that Week 5 meeting between these two teams and health is a big factor in that.

We know that Collaros is healthy and rested, being finely tuned and ready for the Western Final thanks to his team’s incredible 15-3 record. Securing the top spot in the West has given Collaros a great luxury in terms of rest and preparation. It also helps that he went through the exact same process last year, meaning that rust and/or a high-pressure moment like a single-elimination game with a potential dynasty on the line won’t feel all that foreign to him.

Rourke, unfortunately, sits on the opposite side of this equation. He led his team to a win over Calgary in the Western Semi-Final, but we could see the effects of his foot injury lingering at points. Rourke and the Lions will manage that injury through this week and do everything they can to have their star player ready for Sunday but physically, Rourke won’t be where Collaros is at this point in the season.

Inexperience has to factor in here as well. While Rourke has shown he’s fully capable of looking like he’s wearing a cape when he takes the field, he could be hobbling onto a tremendous stage on Sunday. We saw something similar in another first-year starter in that Western Semi-Final, with Jake Maier‘s 12-22, 138-yard effort. If Rourke can go out and play at that high level we saw in the first 11 weeks of the season, it would be the best chapter yet in the remarkable story he’s writing this year.

What actually determines the QB battle

While most everyone will think of the CFL’s two best pivots colliding on Sunday, what it really comes down to is a defensive battle. The defensive unit that slows the quarterback best will likely steer their team to a win and a trip to Regina for a shot at the 109th Grey Cup.

The Lions may have the edge on defensive pressure. Their 45 sacks this year was third in the league, while the Bombers managed 36, which had them at eighth. Another BC edge comes in two-and-outs forced. The Lions had 84, tying them for third with Toronto, while the Bombers had a league-worst 63.

Still, the Bombers were second in the turnover ratio this year, at plus-14. The Lions were third, at plus-eight.

The sign says it all: Loudest fans in the CFL 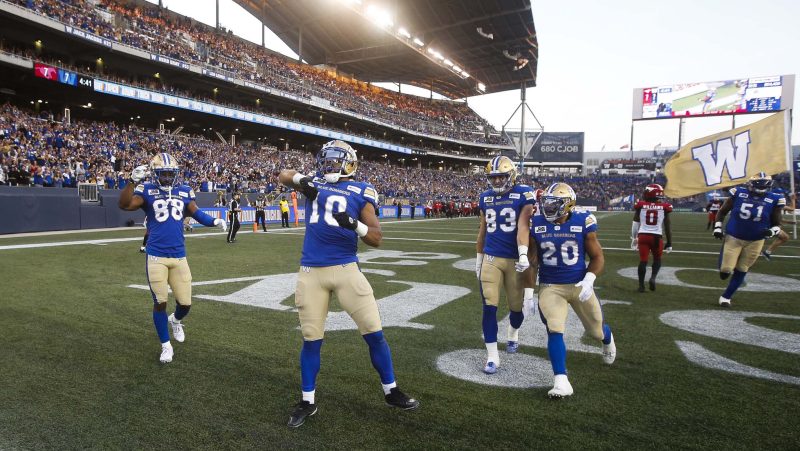 The Blue Bombers’ loud and passionate fans have had plenty to cheer about the last two years, as they’ve seen their team lose just once at home (The Canadian Press)

Winning in Winnipeg has been a one-sided affair the last two seasons. The Blue Bombers are an astounding 15-1 at IG Field and that doesn’t include last year’s Western Final victory over Saskatchewan.

As the wins and the hardware have accumulated these last few years in Winnipeg, the atmosphere at Bombers’ games has also ramped up. Whether you’re one of the 30,000 people in the stands or just watching on your couch at home, the energy at IG Field — it can be a scorching hot summer day or a frigidly cold afternoon in December like last year’s Western Final — might be the very best in the league this year. You can’t just have a sign at field level declaring that IG Field is the home of the league’s loudest fans if it isn’t true.

The Lions will have to play through noise, cool weather (a projected daytime temperature of minus-five Celsius that could feel like minus-nine) and, oh, a potentially historically great opponent on Sunday. The road to the Grey Cup goes through Winnipeg and it isn’t an easy one.