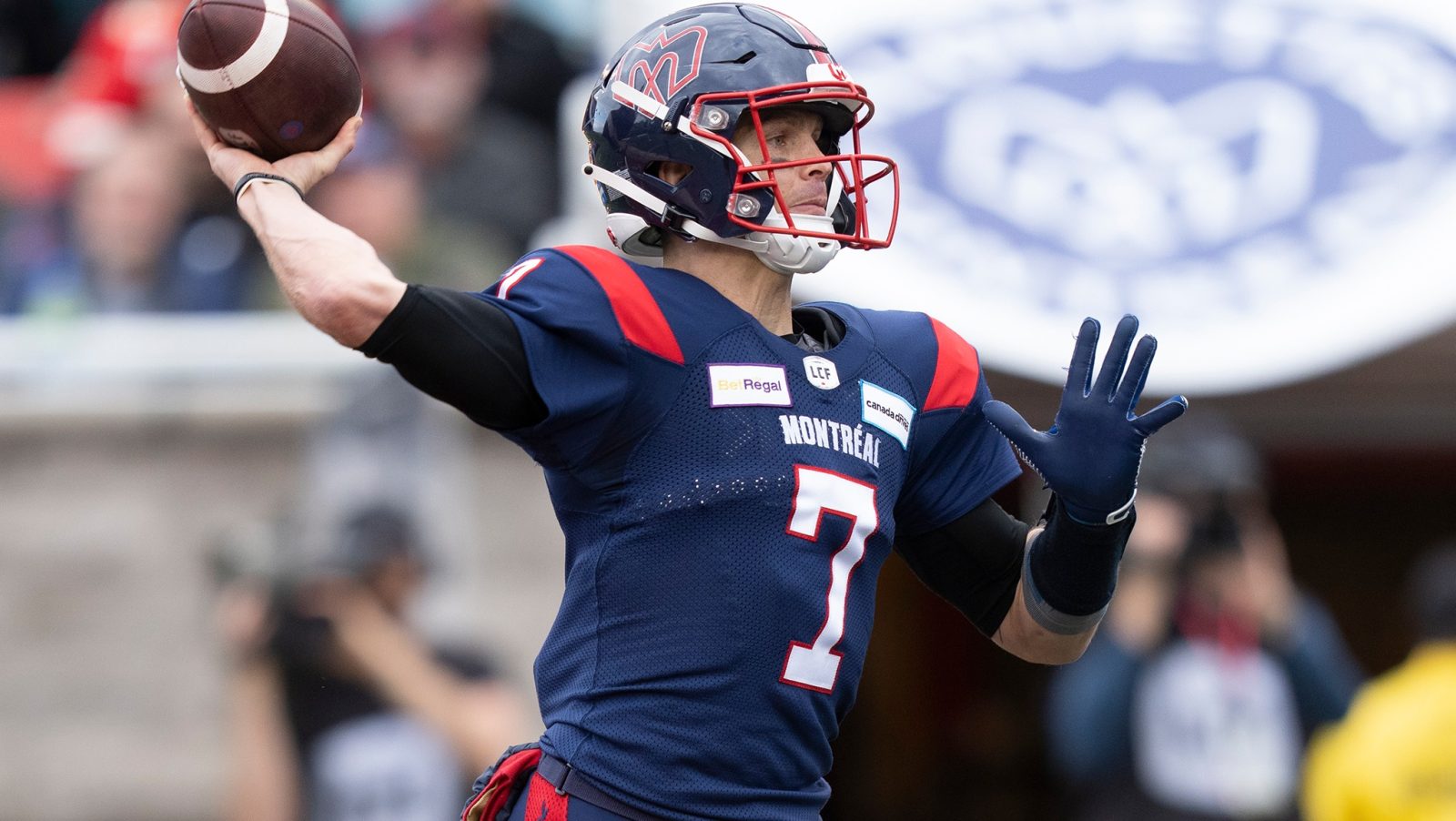 Building a fantasy team on Division Final Sunday will center around which pivot best suits your offensive vision.

Each of the four starting quarterbacks have strong resumes with each of them having shown their prowess during the regular season. In the end, it comes down to whether fantasy users want the one who nearly rewrote the league’s record book, the one who is two wins away from a third straight Grey Cup, picking a ruthlessly accurate passer or, finally, a veteran gunslinger sporting Double Blue.

This is what Grey Expectations has been driving toward, the dramatic final two chapters of a remarkable season. Let’s unpack this drama, shall we?

2022 CFL PLAYOFFS
» CFL and Genius Sports: Check out the CFL GameZone
» Sign up and set your lineup for the Division Semi-Finals!
» Make your Eastern and Western Finals picks and you could win $1,000 cash
» Start vs. Sit: Catching a win in the Division Finals

1. Nathan Rourke, BC ($10,000 Salary): Rourke’s running ability gives him the top spot ahead of Sunday. He rushed just once in the Western Semi-Final win, but with a trip to Regina on the line, expect to see a flash or two. Oh yeah, Rourke can also throw the ball, too.

2. Zach Collaros, Winnipeg ($10,000): Can Collaros make it eight straight games with at least two passing majors? The finalist for Most Outstanding Player has thrown 19 of his league-high 37 touchdown passes in that span while putting up at least 17.7 fantasy points four times. Keep in mind he did most of this without Greg Ellingson ($7.500) in the lineup. Now that Ellingson is back, Collaros’ options will feel endless.

3. McLeod Bethel-Thompson, Toronto ($8,500): Yardage won’t be an issue for Bethel-Thompson, who threw for at least 280 yards six times this season. The challenge will be whether or not he can exploit a Montreal Alouettes pass defence that gave up 30 completions of better than 30 yards during the regular season. There’s also the presence of Andrew Harris ($6,000), who could easily put a dent into the volume of Bethel-Thompson’s pass attempts.

4. Trevor Harris, Montreal ($8,000): The last time Harris faced the Toronto defence, he lit them up for 413 yards and a pair of majors. He’s been pinpoint accurate the past two games, completing 52 of 66 attempts (78.7 per cent), a number that does not bode well for an Argos pass defence that was eighth in opponents’ completion percentage (68.3 per cent) throughout the regular season. 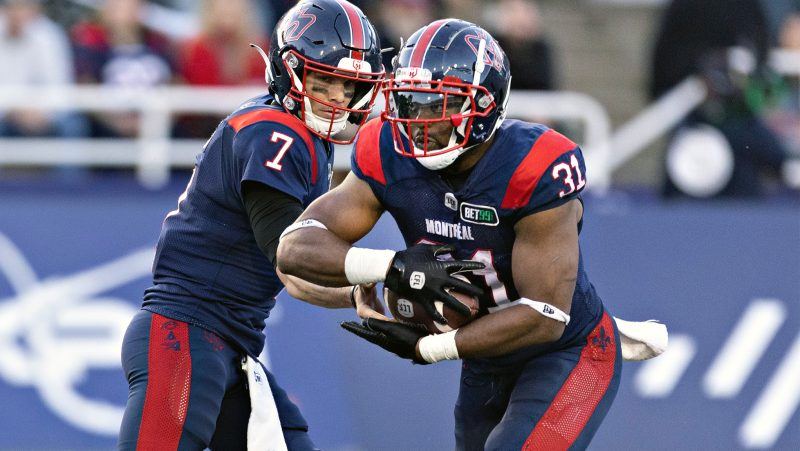 1. William Stanback, Montreal ($5,500): If there’s a back who can rack up huge numbers on Sunday, the bet would be with Stanback. He had a season-best 14 touches in the Eastern Semi-Final win over Hamilton and despite the recent hot streak of Walter Fletcher ($6,000), Stanback is more than capable of reverting to his 2021 form if he gets into an early groove. The bet here is that happens.

2. James Butler, BC ($7,500): Take away his cameo in the regular season finale and Butler comes into Western Final having rushed for better than 80 yards in six of his last seven games, including a 104-yard effort against the Blue Bombers in Week 19. If Butler has 16-plus touches on Sunday evening, things would bode very, very well for the Lions.

3. Brady Oliveira, Winnipeg ($7,500): He’s steady, and while fantasy users wished he’d get the ball more often near the goal line, Oliveira presents a good option that will produce enough fantasy points to merit a spot on your roster.

4. Andrew Harris, Toronto ($6,000): Toronto signed him for this moment, and while his post-season exploits are reason for excitement, keep in mind that Harris’ 4.3 yards per carry were the second-lowest among running backs with at least 50 carries. Harris also did not reach the end zone in his 114 carries. How much he plays is another risk that comes with selecting him. Regardless of where he lands on the depth chart on Saturday, Harris will be a factor.

5. Walter Fletcher, Montreal ($6,000): You can’t ignore his value to the Als backfield over the past three games as he has been a valuable part of the offence. However, Montreal could be ready to go all-in with Stanback.

6. A.J. Ouellette, Toronto ($6,000): As valuable as Harris’ return will be for Toronto’s Grey Cup hopes. It also serves as a tough break for Ouellette, whose play was more than just unsung after he gained the starting job. If Ouellette is atop the depth chart when it comes out on Saturday, it presents a glimmer of hope, but it feels like he will be odd man out. 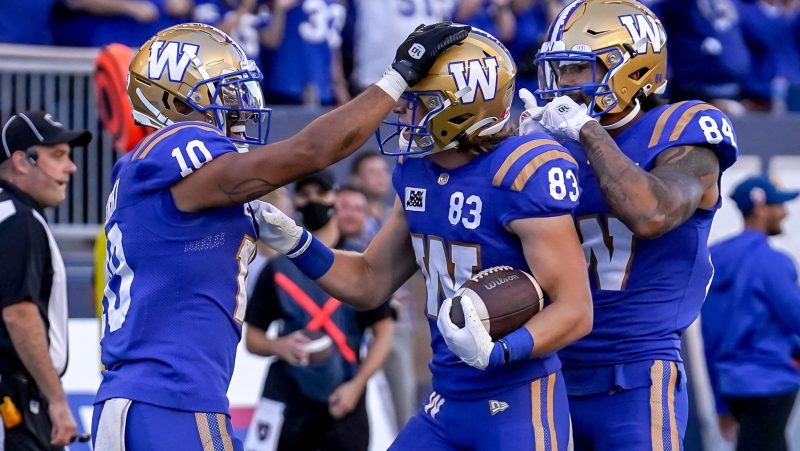 Winnipeg Blue Bombers receiver Dalton Schoen finished the regular season as the leader in touchdown receptions and is set to make his playoff debut in the Western Final (BlueBombers.com).

1. Dalton Schoen, Winnipeg ($10,000): BC knows firsthand how hazardous Schoen can be to their post-season health after watching him catch 14 passes for 283 yards and four touchdowns in their three regular season meetings. That’s 66.3 fantasy points, so if he’s merely average on Sunday, he’s giving fantasy users 22.1 fantasy points.

2. Eugene Lewis, Montreal ($10,000): Lewis’ numbers against Toronto may not be as devastating as Schoen’s versus BC, but the Argos allowed 13 receptions for 199 yards and a major to Lewis in the regular season. One can definitely make a case for Lewis being atop the rankings.

3. Kurleigh Gittens Jr., Toronto ($8,000): Bethel-Thompson has gone to Gittens in high leverage situations all season. Expect that trend to be increased on Sunday as Gittens should be in the neighborhood of 10-13 targets. The Toronto playmaker has fared well against the Alouettes this season, catching 13 passes for 183 yards and a major. Making him the clear Argos receiver for fantasy users to turn to.

4. Bryan Burnham, BC ($7,729): As elite as BC’s receiving corps has been this season, it still begins and ends with Burnham, who scored double digit fantasy points in six of the ten games he’s appeared in. The Burnham who scored a combined 68.4 fantasy points in Weeks 9-11 is still lurking. Fantasy users would be wise to take a chance on Burnham this Sunday.

5. Nic Demski, Winnipeg ($8,500): A full-strength Demski is expected to be in the lineup on Sunday. That means he can pick up on a scoring stretch that has seen score a major in six of his last seven games while scoring double digit fantasy points in nine of his last ten. The Bombers will find ways to give Demski 12-15 touches, which is why he needs to be strongly considered on your roster.

6. Dominique Rhymes, BC ($8,500): Rhymes tagged the Bombers for 31.6 fantasy points in Week 5. The presence of Burnham, who did not play in that matchup, will take some of the focus off Rhymes, yet keep in mind that three of Rhymes’ 11 touchdowns this season have come against Winnipeg.

7. Jake Wieneke, Montreal ($5,651): We could be in the middle of a Wieneke revival. He’s caught 10 passes for 181 yards and two majors in the last two games and will need to maintain his current pace in order to keep Toronto from collapsing its coverage on top of Lewis.

8. Keon Hatcher, BC ($7,000): Quietly, Hatcher has scored double digit fantasy points in five of his last six games. His 30.2 fantasy point performance last Sunday is indicative of what he can do when Rourke is at pivot.

9. Greg Ellingson, Winnipeg ($7,500): The rust should be off Ellingson, making him a sneaky good flex option.

10. Cam Phillips, Toronto ($4,295): There’s always the prospect of a surprise performance in a Division Final game. Why not Phillips, who has flashed his upside at times this season?

BC: Nathan Rourke ($10,000) and Keon Hatcher ($7,000) is an excellent foundation if you want Rourke in your lineup. A third Lions player would be a tough add, with Terry Williams ($3,566) an interesting add that would pan out well if the game turns into a scoring free-for-all.

Toronto: A workable and productive Argos stack begins with McLeod Bethel-Thompson ($8,500) and followed with Kurleigh Gittens Jr. ($8,000). There’s enough salary flexibility left to consider taking a flier on either Andrew Harris ($6,000) or A.J. Ouellette ($6,000), depending on who starts on Sunday afternoon.

Montreal: Trevor Harris ($8,000) is salary-friendly and would fit well if you’re banking on William Stanback ($6,000) to play above his salary expectations. That opens the door to add the likes of either Jake Wieneke ($5,651) or Tyson Philpot ($4,037). The option is also there to pad your running numbers with Walter Fletcher ($6,000).