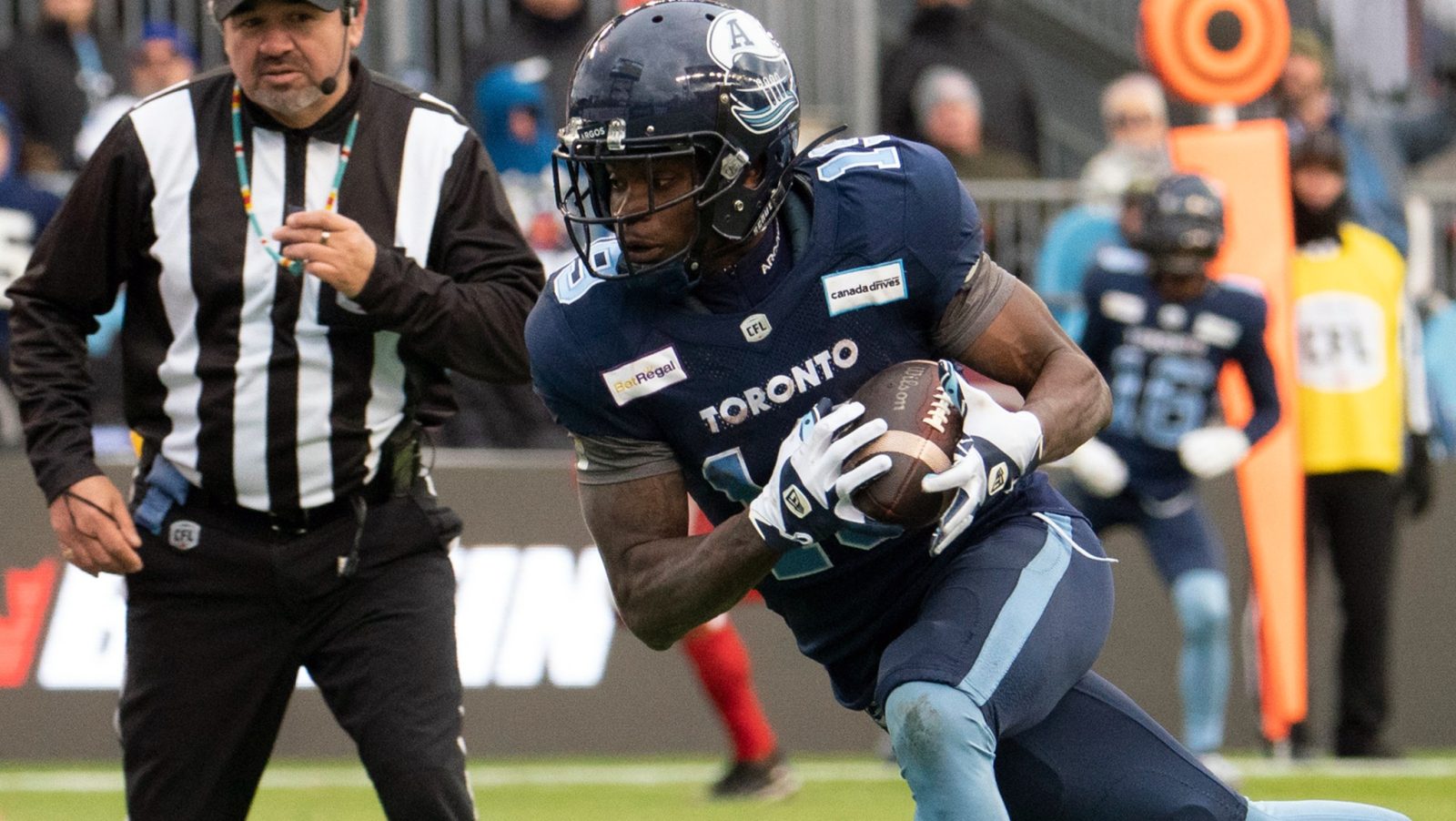 The last time you met in a Grey Cup was in 1950, in a little something that became known as The Mud Bowl.

Weather is supposed to be about minus 10 in Regina most of this week and minus 8 on game day, so I think you’ll be okay this time around. Might wanna think about packing some staple guns in the footwear luggage, though.

Here are the Eastern and Western Final takeaways.

2022 CFL PLAYOFFS
» Lewis on Als loss: ‘This one hurts for all of us’
» Through the Lens: Eastern Final
» Boxscore: Als, Argonauts by the numbers
» Argos punch ticket to Grey Cup with win over Alouettes

THE SKEPTICS CAN TAKE A SEAT

Argos’ quarterback McLeod Bethel-Thompson came up with his best game of the season at the right time as he led Toronto to its Grey Cup berth. Bethel-Thompson completed 19 of 27 passes for 299 yards, throwing two touchdown passes and did not turn the ball over.

In his execution of Toronto’s diversified offensive game plan, Bethel-Thompson made the Alouettes pay early and then pay some more as the game wore on, keeping Toronto ahead even when Montreal’s offence had gotten in gear and had begun to find its own fortunes.

In doing so, Bethel-Thompson has forced his critics to zip it, at least for the time being.

“I think some skeptics are going to be a little bit quiet on him right now,” said head coach Ryan Dinwiddie, who later pointed out that he felt his quarterback has been subjected to unfair criticism. “I just feel like some people got an agenda to pick on him a bit.”

Well, that’ll have to wait now. And if he does it again in the Grey Cup, it’ll have to stop.

THE TORONTO O-LINE HAS ARRIVED

Winnipeg’s offensive line has gotten all the glory and all the publicity this season – and for a few seasons now – and that has been richly deserved. The unit had another sensational day against the BC Lions, keying running back Brady Oliveira’s 130 rushing yards and the team’s overall rushing total of 173 yards, while giving up just a single sack.

What might be of surprise is that there are no worries when it comes to Toronto’s offensive line, either. The group capped weeks of improving health and more cohesion with its best effort of the season in the Eastern Final. While Toronto’s rushing numbers weren’t as impressive as Winnipeg’s, Toronto’s run game did not figure as prominently for them.

What really stood out for Toronto was the clean pocket that Bethel-Thompson was afforded most of the day, even against a defensive coordinator (Montreal’s Noel Thorpe) who is well-known for sending all kinds of different blitz packages at his opponents.

They’ll face another big, big challenge from that Winnipeg defence on Sunday, but their performance in the Eastern Final showed they have the goods to quite possibly hold the fort.

Check that; offensive linemen don’t like the word “hold.” To secure the fort, is what I mean.

ZACH’S ANKLE IS GONNA BE A THING

Unless Winnipeg quarterback Zach Collaros is zipping around the field on the first day of practice leading up to the Grey Cup and showing that the ankle that forced him to the sidelines in the late stages of Sunday’s game is just fine, that ankle of his will be in the spotlight.

The West’s candidate for Most Outstanding Player said only, “I’m good,” when asked about the ankle after his team’s win over BC, but that is not going to be good enough for observers and reporters without some proof in the pudding.

Collaros’ ankle is likely to be the subject of intense scrutiny and supposition this week, so I hope you’re prepared for that.

Good thing we had Nathan Rourke’s foot to serve as a sort of training camp.

THE PROPHECY HAS BEEN FULFILLED

You are going to hear a lot about running back Andrew Harris taking on his old team in the Grey Cup, so it’s a good thing we’ll have Collaros’ ankle to break up the waves of Harris versus the team that let him go.

After the Argos beat Montreal, Harris was asked who he’d rather play in the Grey Cup and he tersely blurted out “I don’t care,” and that was the end of it. But you’d have to think that now that the match-up is set, he will want to stamp the Grey Cup game with one of the biggest ‘I told you so’s’ the league has ever seen. Or at least since Shawn Lemon was nominated for Most Outstanding Defensive Player a couple of weeks ago.

The Bombers felt they were fine to move on after Harris’ five stellar seasons with them and the play of Brady Oliveira has done nothing to prove that notion a lie, especially in light of Oliveira’s sensational Western Final performance.

Now, the student faces the master, looking to snatch the pebble from his hand on the big stage.

“He taught me lots,” said Oliveira of Harris. “It’s going to be cool to go up against him and battle it out for the Grey Cup.”

BONUS TAKEAWAY: Harris and Oliveira won’t take on each other, of course, they’ll just try to out-do each other. The big match-ups in this regard will be middle linebackers Adam Bighill versus Harris and wrecking ball A.J. Ouellette (tell me you’re not itching to see that particular confrontation) and Henoc Muamba versus Oliveira.

BONUS BONUS TAKEAWAY: Winnipeg head coach Mike O’Shea knows the value of his team’s strong running attack. It’s like a really good, foundational bass player in a rock band. “There’s a it of calmness to it,” said O’Shea. “I mean, it’s furious out there, the run game. Chewing up yards. (But) You can just go to that place where you hand the ball off, relax again. Get things back in rhythm.”

THEY HAD ALL FOUR PHASES WORKING FOR THEM

The Winnipeg Blue Bombers got big plays from all three units at times during the Western Final, critical plays that helped push them to a third straight Grey Cup appearance. But each of those units also fell down on the job a number of times throughout the game, making the going a little tougher.

But there was an extra phase that was spectacular throughout, stem to stern, opening kick-off to final whistle.

“Can’t say enough about the crowd,” said O’Shea afterward. “Tack them on to the defensive side. They made it so difficult on BC’s offence to run those plays at the end.”

With the Lions trying to drive the field and perhaps send the game into overtime, the Winnipeg crowd summoned all the might of its collective will against the bid, making it nearly impossible for quarterback Nathan Rourke to communicate with his teammates as the clock drained.

“Credit to the Winnipeg fans,” said Rourke. “That’s why you go for home field advantage.”

“The fans chewed up so much clock,” said O’Shea. “Unbelievable.”

AND FINALLY… Eight catches on eight targets, 127 yards a touchdown and a beauty of a contested catch to plop onto the highlight reel. In a Division Final. Tyson Philpot has arrived.