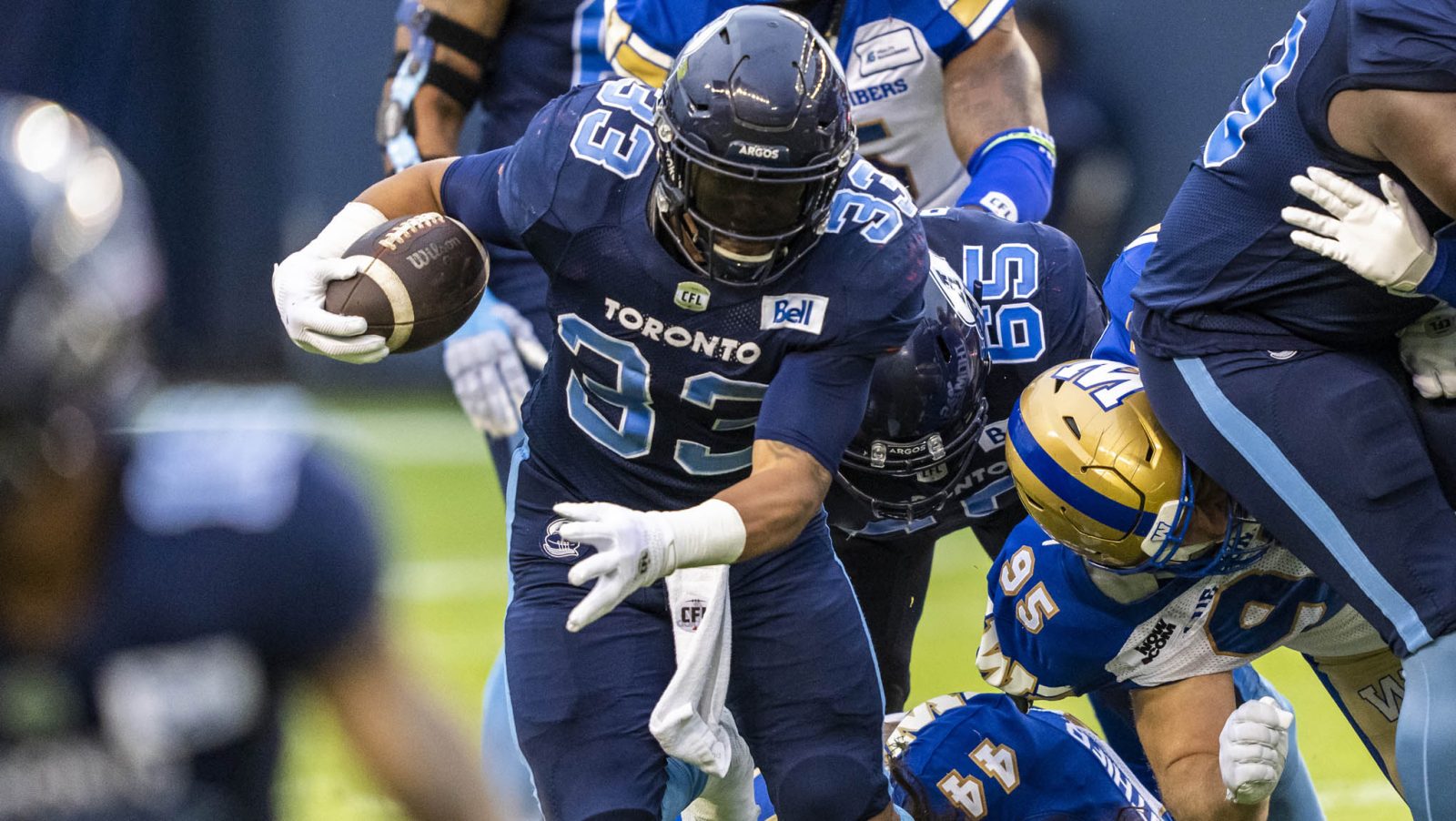 REGINA — The conversation that began almost a full year ago as the Winnipeg Blue Bombers hoisted the Grey Cup over their heads is about to be answered.

Can this team make history?

The Bombers will arrive in Regina on Tuesday not thinking three-peat, but simply about spending another week together and putting in the work required to get yet another win this week. The routine is old hat for this group now as they’ve gone 26-4 through the last two seasons and have been an unstoppable, unbeatable force in the playoffs.

Their 28-20 dispatching of the BC Lions in the Western Final was their latest reward and it sets the stage for the 109th Grey Cup, where a determined opponent will meet them. A very familiar face will line up against them on Sunday, which will prove to be a blessing of a storyline that could only come from the football gods.

2022 CFL PLAYOFFS
» Argos punch ticket to Grey Cup with win over Alouettes
» Best In The West: Bombers advance to 109th Grey Cup
» Steinberg’s MMQB: How can you not feel good for MBT?
» Landry’s 5 takeaways from the Division Finals

Who three-peats? The Bombers or Andrew Harris?

The storyline that emerged out of Winnipeg after the Blue Bombers had downed the BC Lions was that the team has a shot at history. We haven’t seen a three-peat Grey Cup champion in 42 years (shoutout to Edmonton’s five-in-a-row dynasty from 1978-1982). These Bombers, who have been nothing but dominant since Zach Collaros stepped in as their starter in late 2019, will try to take what’s becoming an increasingly familiar step toward history.

They’re not the only ones thinking three-peat, though.

In helping power the Toronto Argonauts past the Montreal Alouettes on Sunday afternoon, Andrew Harris is also poised for a three-peat, having played an integral role with those championship Bomber squads in 2019 and 2021.

The Bombers and Lions were about to kickoff on Sunday afternoon when Harris was asked who he preferred as an opponent.

“Don’t care,” he said, brushing the topic aside like it was a linebacker in front of him.

Harris’ departure from the Bombers as a free agent last year — something he was openly upset with — and what we know about him as a competitor tells us a different story. That he gets a chance to extend his Grey Cup streak at the expense of his hometown team that cut him loose in the winter will be fascinating to follow on Grey Cup Sunday and in the leadup to the game.

His former head coach sees it differently than Harris.

“I think it’s good for the league. It’s probably going to dominate all the (storylines). Anything that will draw interest to our league…is something positive,” Mike O’Shea said Sunday night.

What does O’Shea expect out of him? 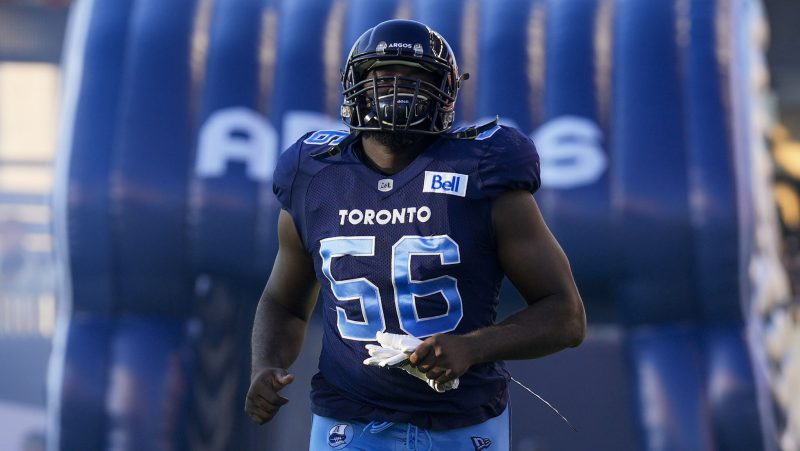 Ja’Gared Davis heads into his sixth consecutive Grey Cup game, through a career that’s seen him suit up for the Argos, Ticats and Stampeders (Kevin Sousa/CFL.ca)

A note for GMs across the league. If you want to get to the Grey Cup game, sign Ja’Gared Davis.

The first-year Argo defensive lineman has one of the most interesting streaks in the league. Sunday’s win sent the 32-year-old to his sixth consecutive Grey Cup game. He played in the past two games with Hamilton and spent his first three years in the league with Calgary, winning the Grey Cup in 2018.

“I know he came here for the same reason I did,” Harris said of Davis. “Speedy (Brandon Banks) is in the same boat. Our relationship, between Speedy, Ja’Gared and I is pretty special in that aspect.”

Davis played in 14 games for the Argos this season and had seven sacks to go with 36 tackles.

While Davis heads to his sixth straight championship game, Banks has a streak going of his own. The veteran receiver, who is also a first-year Argo via a nine-year stay in Hamilton, will play in his third consecutive Grey Cup game and his fourth overall. Banks’ stats were modest on Sunday — he had a pair of catches for 25 yards, took a carry for nine yards and had a 35-yard punt return — but he made impact plays for his team in the first half.

It hasn’t been an easy ride for McLeod Bethel-Thompson. A journeyman quarterback whose career took him all over the NFL, the Arena Football League and the UFL before he came to the Argos and the CFL in 2017, Bethel-Thompson has worked his way up the Argos’ quarterback ladder. He was finally named the team’s starter in 2021. While the Argos were the East’s top team through the season and Bethel-Thompson led the league in passing yards (4,731) and was third in touchdowns (23), he arrives at the Grey Cup with doubters to silence.

The East Division’s all-star quarterback, Bethel-Thompson watched from the sidelines in 2017 as Ricky Ray‘s backup when the Argos won the Grey Cup. This week, he finally gets his shot at leading his team to its 18th-ever Grey Cup and an undisputed place in Argonauts’ history.

One receiver exploded on to the CFL scene, going from the faceless blur of training camp jerseys to the league’s leading receiver in a span of five months. The other has steadily emerged as a piece of his team’s offence, working himself into All-Star status in 2021 and his team’s leading pass catcher in 2022. We are of course talking about Winnipeg’s Dalton Schoen and Toronto’s Kurleigh Gittens Jr. Where would either team be this year without their star receivers?

In Schoen’s case, a receiver breaking the 1,400-yard mark would normally warrant Most Outstanding Player discussion. That was swallowed up in the excellence that the Bombers exude, particularly with Zach Collaros having the best season of an already stellar career, leading a team that’s on the cusp of history itself.

Similarly, Gittens, the 23rd overall pick in the 2019 CFL Draft, is more than deserving of his nomination for Outstanding Canadian, but is up against it with Nathan Rourke having the season that he had in the West.

Both receivers will tell you that their personal accolades are secondary to their greater goals, which they’re now just days away from realizing. We saw it in the Divisional Finals and we’ll very likely see it again on Grey Cup Sunday: their team’s success rests on them having productive games. 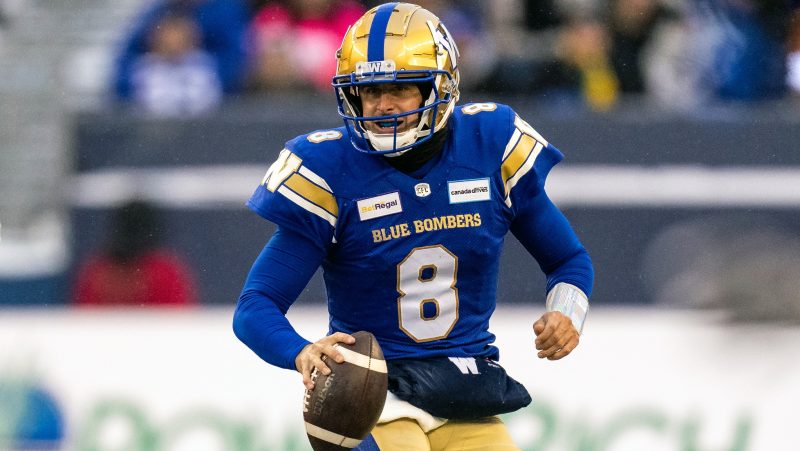 The discussion around Zach Collaros’ place among the CFL all-time greats could change this week, if he walks out of Regina with another MOP and Grey Cup win (Christian Bender/CFL.ca)

The replay of Collaros getting rolled up in the final three minutes of play in the Western Final is hard to watch. He limped off of the field on Sunday night, but did walk in without any hitches for his post-game media availability and both he and O’Shea said that they aren’t concerned about his status going forward. Still, until we see him in practice and how he’s listed on this week’s injury reports, Collaros’ status will be a storyline that dominates this week.

Assuming he’s healthy, there’s another discussion that centres around him. The West Division nominee for Most Outstanding Player, Collaros could be the first back-to-back winner of the award since Anthony Calvillo did it in 2008 and 2009.

Let’s zoom out a little on this. Should Collaros be named the MOP this year and he leads the Bombers to that third consecutive Grey Cup, he enters into a very elite discussion on his place among the game’s greats. Tom Wilkinson and Warren Moon led Edmonton to three consecutive Grey Cups (and would add two more before they were done). Jackie Parker steered Edmonton to a three-peat from 1954-1956.

If Collaros leaves Regina this week maxed out on the hardware he’s eligible to win, he’ll enter into some rarefied CFL air. Hall of fame? That almost already feels like a lock for the 34-year-old. All-time winner? It’d be a fact. All-time great? For your own safety, don’t try to argue against that in Winnipeg.