Steinberg’s MMQB: How can you not feel good for MBT? 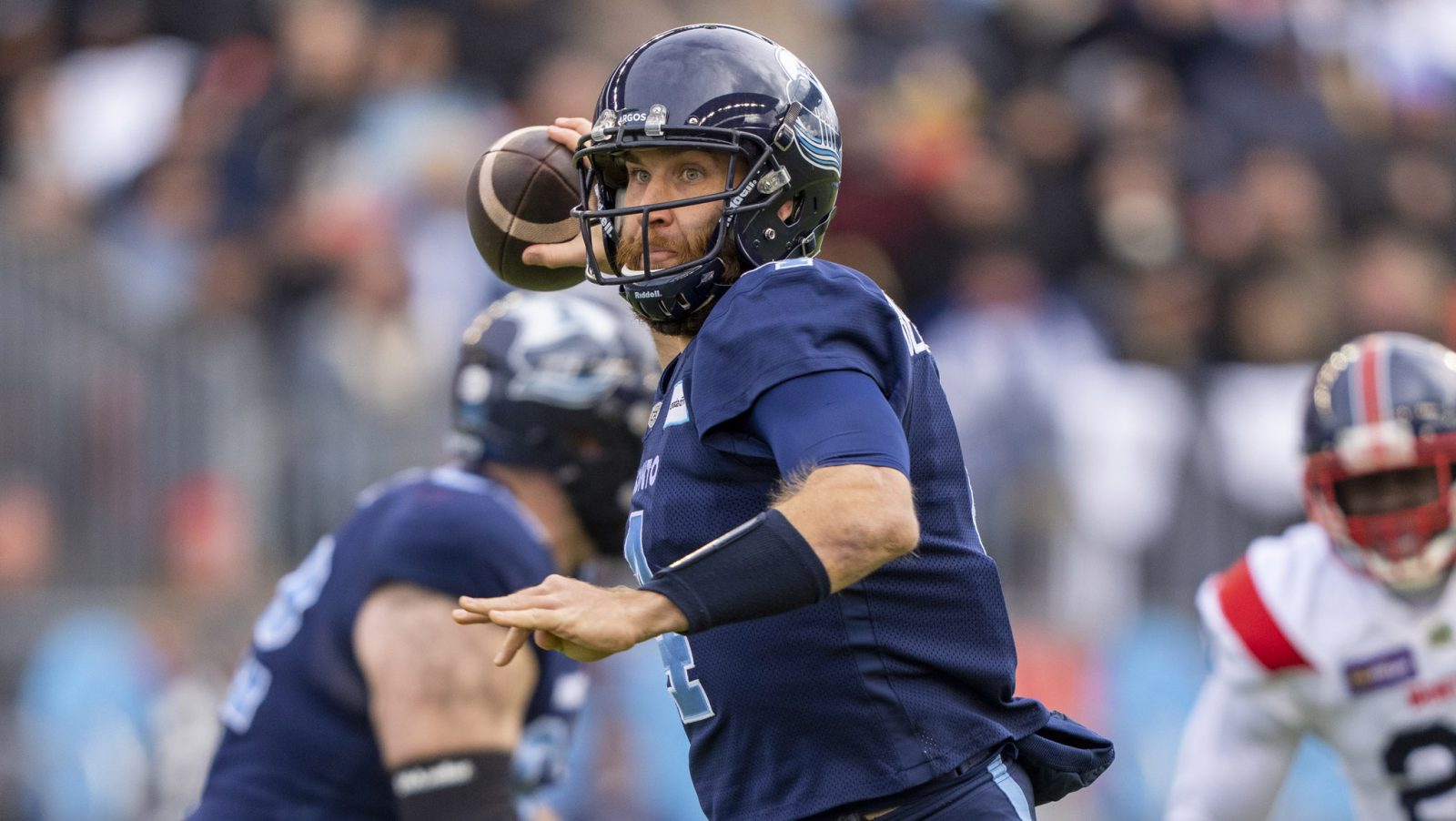 Steinberg’s MMQB: How can you not feel good for MBT?

I think it’s so cool McLeod Bethel-Thompson is headed to the Grey Cup for the first time in his career as a starter. A true underdog story, a winding road, overcoming adversity…you choose the buzz term, and it applies to Bethel-Thompson. And now here he is, with the most stability ever in his football life, on his way with the Toronto Argonauts to the CFL’s biggest stage.

Bethel-Thompson was awesome in Sunday’s 34-27 win over Montreal in the Eastern Final. In one of his signature CFL outings, Bethel-Thompson was mistake-free while throwing for 299 yards and two touchdowns. And what stood out most was how well he managed the game from start to finish.

After helping the Argos to a big lead, Bethel-Thompson was conservative with his decision making as Montreal started to chip away. But as soon as the Als got close, MBT opened things up and made big plays at big times to ensure Toronto remained in control. Bethel-Thompson’s execution was spot on all afternoon long.

2022 CFL PLAYOFFS
» Lewis on Als loss: ‘This one hurts for all of us’
» Through the Lens: Eastern Final
» Boxscore: Als, Argonauts by the numbers
» Argos punch ticket to Grey Cup with win over Alouettes

But could anyone have envisioned Bethel-Thompson doing what he did at BMO Field on Sunday ten years ago? Five years ago? Heck…even as the CFL was restarting late last summer, a moment like Sunday’s for Bethel-Thompson seemed like a stretch. And yet, every step along the way, all this guy has done is defiantly buck the odds.

Bethel-Thompson’s unconventional path gets harder for me to wrap my head around every time I recount it. After a non-descript college career at UCLA and Sacramento State, Bethel-Thompson began one of the craziest football rides I’ve ever seen.

Between 2011 and 2016, Bethel-Thompson started games for the Arena Football League’s San Jose SaberCats and the Sacramento Mountain Lions of the United Football League. During that same five-year span, he had three stints with the San Francisco 49ers, two go-rounds with the Miami Dolphins and Minnesota Vikings, and time with the Philadelphia Eagles and New England Patriots. Oh, and he finally made his way to the CFL for a short stint with Winnipeg.

It wasn’t until the spring of 2017 when Bethel-Thompson would finally find an actual professional football home and not just a place to drop his luggage for a few months. Although, I’m not sure it necessarily felt that way when Bethel-Thompson first arrived in Toronto. He narrowly made the team his first season, which was only the beginning of the uphill climb.

Bethel-Thompson had to surpass James Franklin on the Argonauts’ depth chart in both 2018 and 2019. After the cancelled 2020 campaign, he had Nick Arbuckle to contend with when the CFL restarted last season. And yet, every step along the way, Bethel-Thompson just kept on conquering challenges until he finally…and we mean finally…got his shot.

For the first time in his professional career, Bethel-Thompson entered this season as the guy. He was number one on the depth chart, he was the quarterback others needed to beat out…and he absolutely made the most of it. Bethel-Thompson led the league in passing yards (4,731), completions (387), and attempts (579) in 2022 as Toronto paced the East Division en route to earning a number one playoff seed.

And now, after an emphatic showing on Sunday afternoon, he and the Argos get a chance to play for the 109th Grey Cup. Win or lose, it’s one awesome story.

The Winnipeg Blue Bombers straight up know how to play football when it matters the most. They proved it once again in Sunday’s 28-20 win over the BC Lions in the Western Final and I don’t think a single CFL fan is surprised. This is what they do.

The Bombers faced questions all last year about being ready for the playoffs as they steamrolled the rest of the league through the regular season. And they sure seemed ready to go in two nailbiter wins over Saskatchewan and Hamilton en route to winning a second straight Grey Cup. Now, with a chance to three-peat on the table, they just did it again.

This year Winnipeg was facing questions on a couple different fronts. Yes, there was concern about being rusty after going weeks without playing meaningful football. But questions also existed, at least from some, about individual players, especially on defence, after down statistical seasons by their standards.

The guys in question, however, are all absolute gamers. Of course they were ready to go in front of 30,319 at IG Field. Guys like Willie Jefferson, Winston Rose, Adam Bighill, and Jackson Jeffcoat were dominant all afternoon against the Lions. They know what it takes at this time of year and they showed it.

Take Jefferson, for example. His numbers were down slightly in 2022 from the prior few years, which is fine. Winnipeg still boasted the number one team defence across the board during a second consecutive dominant regular season. But in the Western Final, Jefferson was a monster.

He forced a huge fumble in the first quarter and was disruptive up front all afternoon. Jefferson and Jeffcoat combined for one sack on the final stat sheet, but the number of times they forced BC quarterback Nathan Rourke to make quick decisions was far higher. Helped out by Bighill’s dominant outing, Rourke was hurrying throws the majority of the afternoon.

While Brady Oliveira led the way with 166 total yards on offence, it was Winnipeg’s defence shining brightest against the Lions. From the core names to newcomers like Desmond Lawrence, everyone chipped in as part of a smothering afternoon.

But it really was the usual suspects leading the way. Jefferson and Jeffcoat wreaked havoc off the edges all day long. It felt at times like Bighill was playing every position he impacted the game so dramatically. And Rose led the Bombers with eight tackles and helped stall BC momentum with a big second quarter interception.

Winnipeg’s gamers came to play. Because of course they did.