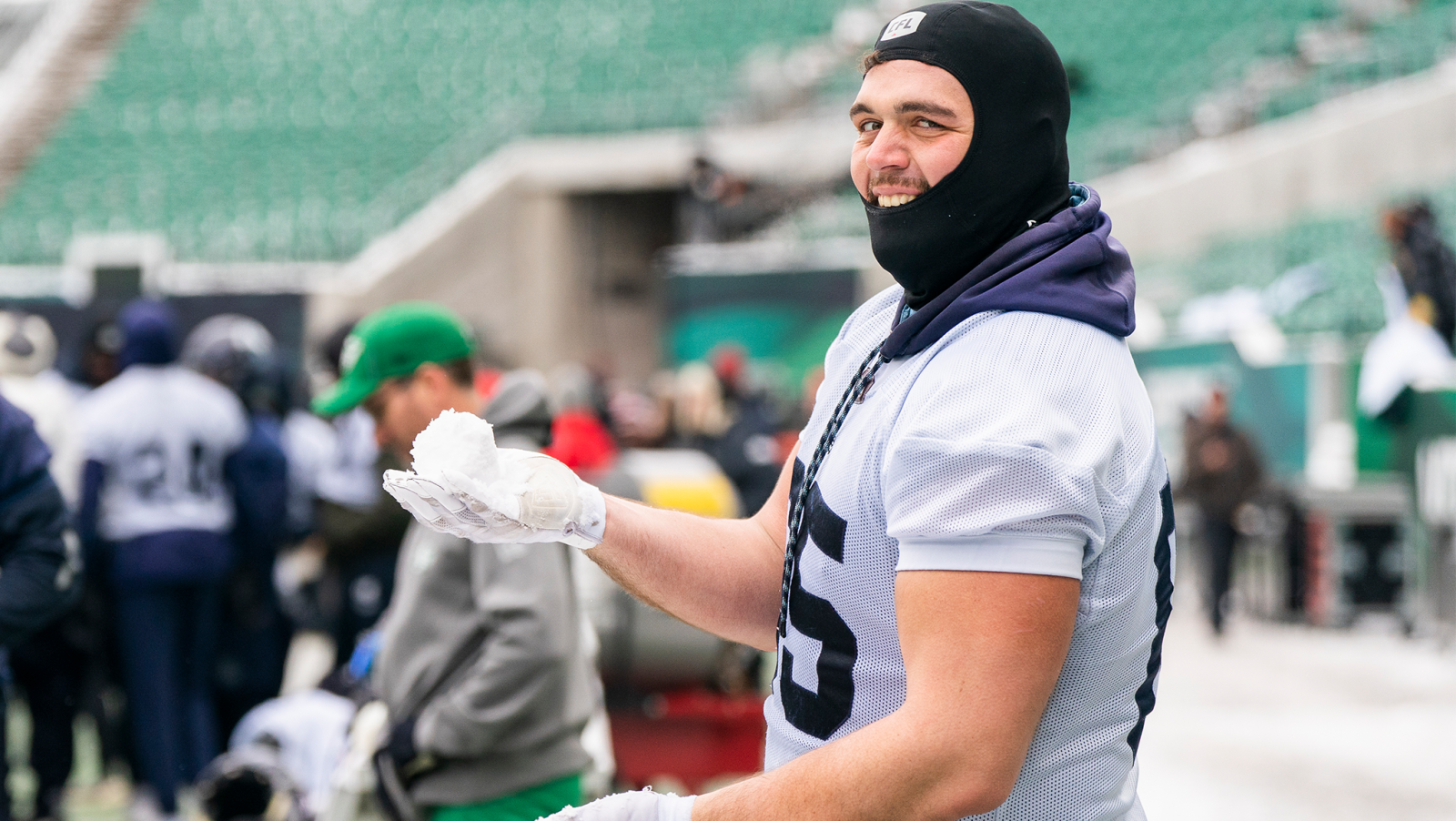 The Toronto Argonauts are not terribly concerned with the weather here in Regina and you get the sense they’d like it if the rest of us would stop preoccupying ourselves with it as well. At least as far as it concerns them.

It’s been a fairly well-worn assumption already this Grey Cup week that the forecast leading up to and including Sunday’s 109th Grey Cup game favours the Winnipeg Blue Bombers.

“Cold is cold,” said the 10-year CFL veteran with plenty of blasé dripping from his comments. “The cold is going to be here for everybody. In the stands, on the field. If we’re cold, they’re (the Blue Bombers) cold as well. It’s about fighting the elements, it’s about being mentally strong. And I think we have a really good team that’s capable of doing so.”

If Muamba doesn’t particularly care to entertain discussion about the elements it is because he knows there is nothing he nor anyone could do about them anyway, so what is the point?

As far as any of his teammates who might not have experienced these types of conditions during their football lives, he expects them to be ready and not at all taken aback by the wintry weather that most Canadians would consider fairly mundane.

“We talked about the weather before we got here,” said Muamba. “It’s not a surprise.”

The Argos aren’t exactly coming off a balmy Eastern Final, either, it should be noted. While the Bombers took on the BC Lions in a cold Western Final, Toronto battled the Montreal Alouettes in temperatures that were not far above freezing. With the wind temperatures dropped to that mark if not a touch below.

“I’ve played in games colder than this,” said running back A.J. Ouellette, looking ahead to Sunday’s forecast of negative 1, with a nighttime low of minus 10. (With kick-off slated for just after 5 p.m. local time, you can expect game temperatures to fall somewhere in between.)

Ouellette, by the way, seemed to be one of the Argos that was really enjoying himself during practice. Certainly he seemed terribly unaffected by the temperatures and cold winds that blew through Mosaic as the Argos went through what appeared to be a more relaxed version of practice, perhaps wading into the elements.

Argos’ quarterback McLeod Bethel-Thompson had already been talking about not only persevering through a cold championship game, but thriving in it, partly due to, he mused, some ancestral Viking blood that was coursing through his veins.

After Wednesday’s practice, he confirmed he was enjoying the elements, joking that he might not look good and proper for the cameras that were present before him. “It was awesome,” said Bethel-Thompson of practice. “You do have to give me a snot check though. Cameraman let me know.”

“It was cold but it wasn’t painful,” added Bethel-Thompson. “If the game’s like it was today I look forward to it.”

Some quarterbacks have been known to put on a pair of gloves to protect their digits during cold weather but Bethel-Thompson was bare-handed at Tuesday’s practice and he is not likely to change for Sunday’s game.

“I would rather have these things,” he said, holding up his hands, “than something that’s artificial between me and the ball. Me and the ball have a pretty good conversation every day so I’d like to touch it as much as possible. I’m not a big fan of gloves. Something can be miscommunicated because you’re not touching the actual surface.”

It’s all about managing your hands’ warmth between snaps, said the native of San Francisco, and making sure they are moist enough to grip the football well. “A little bit of moisture but not too much,” he said. “If you can’t feel your hands then you don’t know how much moisture’s on your hands.”

“You definitely want a hot pack, that’s kinda number one to keep your hands as warm as possible.”

“We’re going to get a feel for it as the week goes on,” said Ouellette, happy with the way he and his mates worked through their first practice.

“We’re gonna get more adjusted to it.”

For Ouellette, the temperature will not be the greatest concern. Footing will.

“It just kind of depends on the surface,” he said. “If there’s a sheet of ice there’ll be more one-cuts rather than multiple cuts. But I’ve been told that the crew does a great job keeping it top-notch for games. So nothing’ll change too much. Pre-game is where you make your adjustments.”