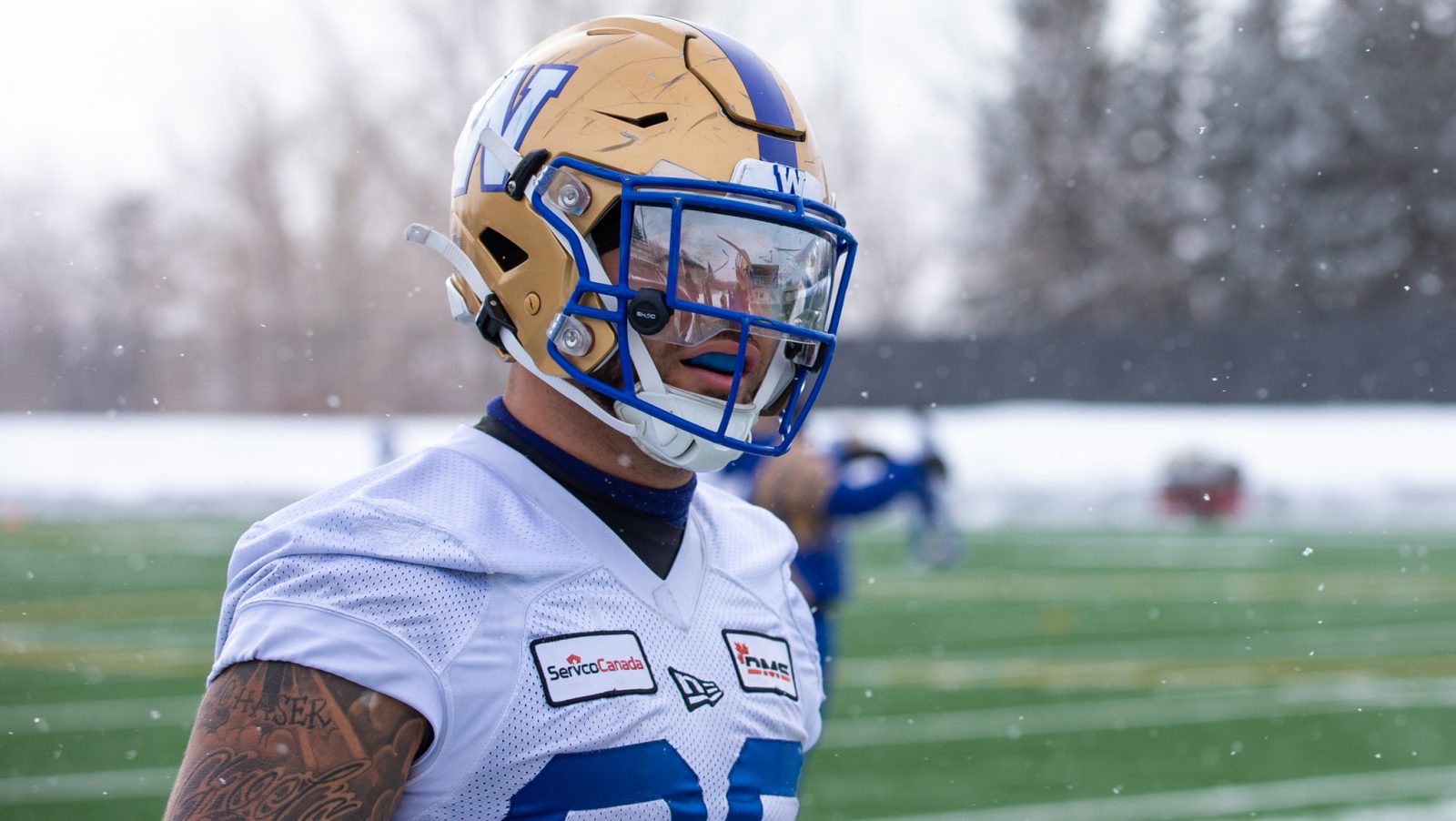 Remembering who he really was helped turn the season around for Winnipeg Blue Bomber running back Brady Oliveira.

The Winnipeg native took over the starting duties this season after veteran Andrew Harris signed as a free agent with the Toronto Argonauts. Oliveira’s dream of starring for his home-town team soon turned into a nightmare.

“Looking back at my career, I’ve got to get into a rhythm, I’ve got to find my grove with the team, the offensive line, get in sync with them,” said Oliveira, who will attempt to help Winnipeg win a third-straight CFL title when the Bombers play the Argonauts in Sunday’s 109th Grey Cup from Mosaic Stadium in Regina.

“It took a little bit of time just to get back to my roots and what got me this far in my football career,” continued Oliveira. “And that’s being a north-south, physical runner. That’s my game and I think I kind of got away from that early in the season. I was trying to be someone who I’m not, trying to find the big play.”

The Bombers started the season with six straight wins, but Oliveira struggled, managing just 196 yards and one touchdown on 62 carries. The low point was a July 15 game against the Calgary Stampeders where he had eight yards on nine carries.

“It was arguably one of the worst games of my entire career,” said the 25-year-old who played at Winnipeg’s Oak Park High School and the University of North Dakota.

A big social media fan, Oliveira saw the criticism being levelled against him.

Instead of following in Harris’s footsteps as a local hero, Oliveira worried about being replaced as a starter, maybe even losing his job. Even during the Calgary game, Kevin Bourgoin, Winnipeg’s former running backs coach who now works with the receivers, pulled Oliveira aside.

“He said ‘we know what you can do, just get north-south, you’re dancing around too much,’” said Oliveira. “I remember he kept telling me, ‘just hit it.’”

During the next week Oliveira worked with running backs coach Jason Hogan and spent time talking with his offensive line. The next week against the Edmonton Elks, Oliveira had his best game of the season, picking up 62 yards on 13 carries. The following week, in a rematch with the Stampeders, he rumbled for 110 yards on 15 carries.

“I think it really sparked the rest of my season,” said Oliveira. “I started running like Brady. Running violent, punishing defenders, sticking to my style of play.

Oliveira finished the regular season third in league rushing with 1,001 yards and four touchdowns on 202 carries. He also had 23 catches for 252 yards and one touchdown.

In the Western Final win over the BC Lions, Oliveira was a workhorse, rushing for a season high 130 yards on 20 carries. Head coach Mike O’Shea said talent was never the issue.

“All that stuff that makes a professional tailback, he has all of it,” said O’Shea. “I don’t think he was having fun at the beginning of the year. He had to get through that patch. He just had to start having fun again. When I watch him, he looks very happy.”

Veteran guard Patrick Neufeld said there was an adjustment period for Oliveira and the offensive line to become comfortable with each other.

“It did take a little time at the start of the season,” said the CFL All-Star guard. “Whether it was (Oliveira) maturing into the role (or) us helping (Oliveira) with the way we do things. It’s a different workload and the way the game changed and evolved.

“He’s now such a great communicator with us. He’s done a really great job of making sure he sees the front the way we see it and kind of rolls the way we roll. I’m super proud of his development over the season. He’s turned into a hell of a back for us.”

“(Oliveira) continues to get better the more he plays,” said Collaros, named the league’s Most Outstanding Player for a second consecutive season. “I think the game is probably slowing down for him.”

Even though they are on different team Harris and Oliveira have spoken during the week.

Long before they were teammates, Harris and Oliveira were friends. The two used to train at the same gym when Oliveira was still in high school. When Oliveira was selected by the Bombers 14th overall in the 2019 CFL Draft it allowed him to learn how to be a professional from Harris.

“He’s arguably one of the best to play running back in the Canadian Football League,” said Oliveira. “The fact I had the opportunity to sit beside him and learn, see how he attacks every single day, I think it benefited my game.

“I was able to take little bits from his game and add it to mine.”

Seeing Harris standing on the other sideline come Sunday will be different. “We know what to expect,” said Oliveira. “It’s going to be cool.

“He’s a proud Winnipegger, just like I am, so it’s going to be a little weird. He probably feels the same thing playing in a Grey Cup and not in that Bomber uniform.”