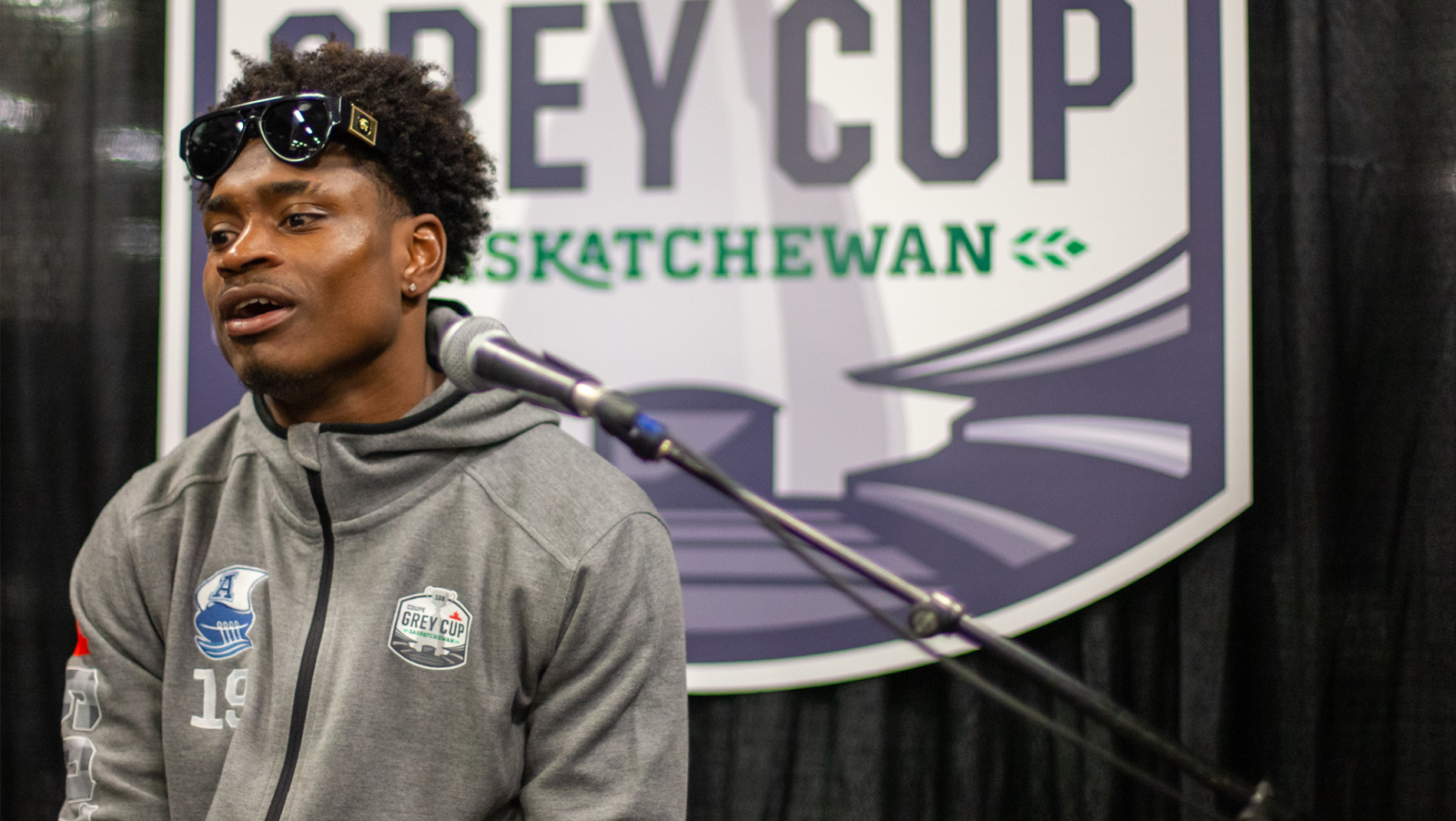 There is an energy that Kurleigh Gittens Jr. can’t contain, won’t contain.

First down or touchdown, the third-year Toronto Argonauts’ receiver can be seen celebrating the accomplishment of a completed pass thrown his way. Four yard gain or forty, Kurleigh Gittens Jr. revels in the moment with a ferocious, conquering the world delight.

109th Grey Cup
» Argonauts, Blue Bombers to compete for 109th Grey Cup
» Quote Board: Argos take the podium Wednesday
» How To Be a Champion: Banks searching for first Grey Cup
» Fire and Ice: Bethel-Thompson touches down at GC109

“I just try to be myself out there,” says Gittens. “That’s just me showing I care about this game. It’s just natural for me. I love the game of football and that’s one thing that makes me, I think, stand out a little more. My passion for the game.”

One thing, sure. Other things that make the 25-year-old stand out are his abilities and his station as one of the CFL’s top receivers, making him a key figure to watch when the Argos take on the Winnipeg Blue Bombers in the 109th Grey Cup game, this Sunday.

Last year, in his second season in the CFL, the Laurier grad stepped up after a rookie season that saw him make one catch in 13 games. As a sophomore, though, Gittens had 50 grabs for 605 yards and four touchdowns, marking a major breakthrough. One that earned him a nomination as his team’s Most Outstanding Canadian.

This season? The booster rockets kicked in, sending Gittens higher and higher as he staked his claim as one of the CFL’s top receivers, finishing sixth in yardage with 1,101 and first in yards after catch with 483. Not only was he named Toronto’s Outstanding Canadian again, he was named top Canadian in the entire East Division and landed a berth on the 2022 CFL All-Star Team.

In becoming the Argos’ top receiver, Gittens has built an ironclad relationship with quarterback McLeod Bethel-Thompson and that is something Toronto will bank on for Sunday’s game. The two combined for nine catches on nine attempts in the team’s Eastern Final win over Montreal, including four second-down conversion connections as well as a huge 31-yard touchdown strike that restored Argo breathing room as the third quarter came to a close.

“There’s definitely something special between us,” Gittens said of Bethel-Thompson, “just because he’s been my quarterback ever since I got in the CFL, and he’s believed in me ever since. And I believe in him too. I strictly believe he is really that guy and I trust him.”

That relationship, combined with Gittens’ desire to get better and better – and to dedicate seriously to achieving that – means that the young man born in Guyana is among the CFL’s elite. But he says he will not rest on those achievements. The goal immediately before him is, of course, to be a Grey Cup champion. Beyond that, he would not mind being more than just one of the league’s best receivers. He’d like to be at the very top of the mountain.

“That’s something you can put on top of your list that you can always work at,” says Gittens of the desire to be number one. “Yes, I want to be the best at what I do. That’s something I strive for every single day.”

Those good, driving instincts were likely already present in Gittens when he joined the Argonauts in 2019, drafted by the Boatmen in the third round that year. Certainly his ambitions and work ethic were stoked, though, by the clutch of excellent role models who surrounded him that season, and he remembers them fondly.

“It goes back to my first year in the CFL in Toronto,” says Gittens. “We had just a whole bunch of monsters in the receiving corps. I could just name ‘em all right now.” And then he does. “We got S.J. (Green), Derel Walker, we had Armanti Edwards, Rodney Smith, we had Jimmy Ralph, we had Alex Charette, Llevi Noel… all those guys helped me become the person and player I am right now.”

“I don’t think I’m good yet,” adds Gittens, modestly. “I can get better at so many things. And I will. I’m never satisfied. I’m always just hungry to be a better version of myself on the field and off the field.”

Toronto general manager Michael Clemons loves the way Gittens plays football and, not surprisingly, loves him even more for who he is off the field, pointing out that Gittens invests much of his off-season time in helping to power team initiatives in reaching out to at-risk youth.

“His journey has not been simple,” says Clemons. “But he makes life look so simple. He’s always smiling, always positive. So easygoing.”

In typical fashion, Clemons paints a bigger, more meaningful picture when he surmises that Gittens’ on-field celebrations are something more than just happiness at making a good play. There is, he thinks, more than that involved in those big bursts of joy.

“I think it’s a greater celebration of all that he has come through,” says Clemons. “When he’s doing that, it’s not trying to show up the (opposing) player. It’s ‘this thing called life has really grown in my favour.’”

Gittens came to Canada at the age of nine, after living a life in poverty in Guyana, his parents estranged from one another. He travelled with his father who was beginning a new life in this new country with a new partner. It meant that Gittens Jr. had to leave his mother, Kim, behind. “Leaving my mom broke my heart, broke her heart,” he says, adding that Kim has yet to travel to Canada in the sixteen years since her son left his birth country.

When his mother does come – Gittens is hopeful it will be next season – “It’s gonna be a joy that I’ve never experienced before,” he says.

In the meantime, he can take solace in knowing that Kim’s son has diligently turned himself into one of the best receivers in the Canadian Football League.

It shows. Every time Kurleigh Gittens Jr. makes another catch.