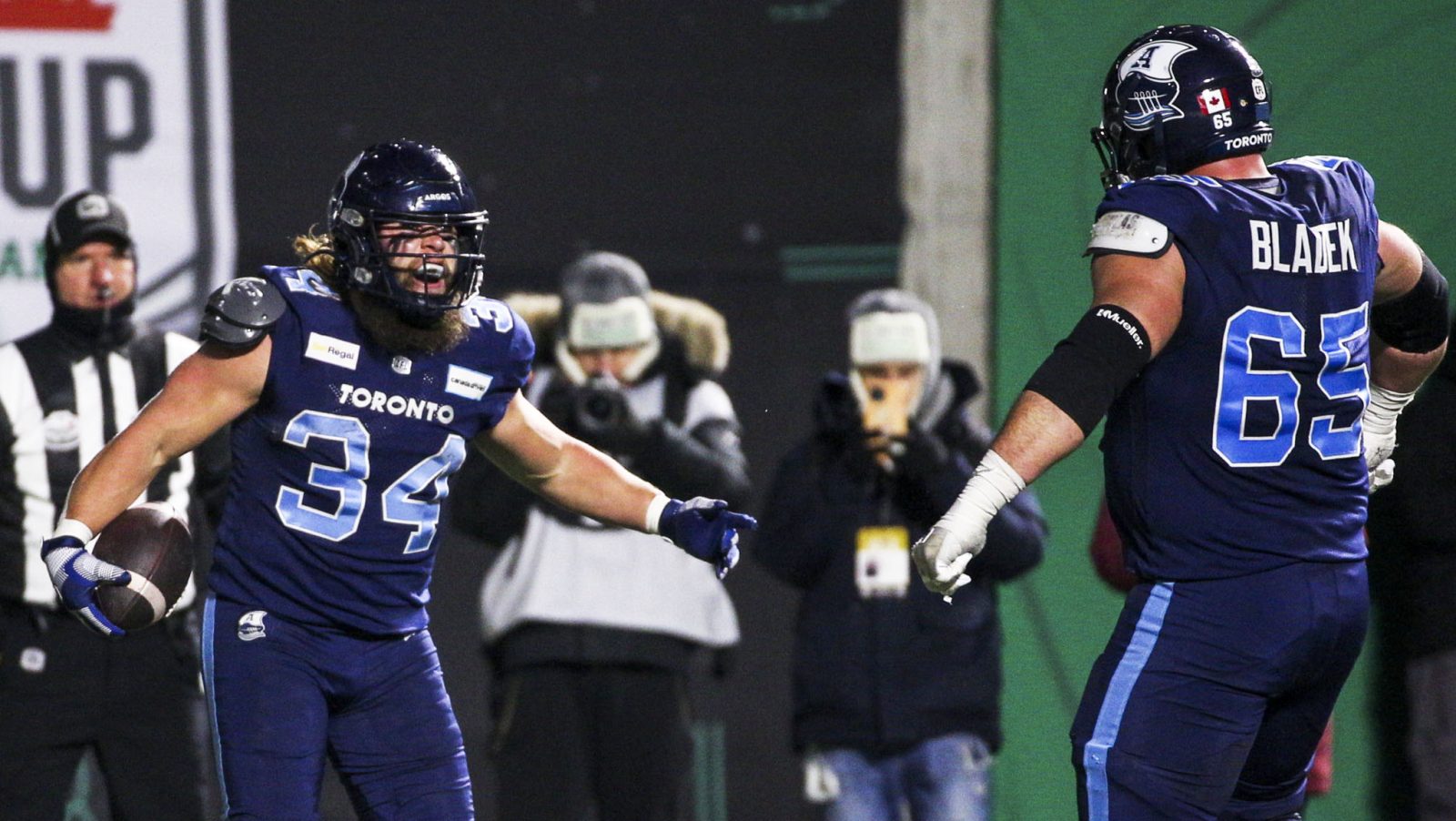 This should be the easiest column for me to write. As someone born and raised in Toronto that has seen the other professional teams flame out in the playoffs — often as the favourite — this should be a celebration for the underdog Toronto Argonauts and really for the entire league that witnessed such an extraordinary conclusion to the season.

It’s not often that a game where at the half there has been poor quarterback play and just 17 points scored turns into a classic, but that is exactly what the 109th Grey Cup was; one for the ages.

The Argonauts’ nail-biting, crazy 24-23 win over the Winnipeg Blue Bombers is a Grey Cup we will be talking about for years to come. On a night that featured two blocked fields goals, each of which we thought meant doom for the kicking team, a back-up quarterback turned hero and a Canadian defensive lineman who went from goat to hero in the blink of the eye, the key memory that will stand out came moments after the final Chad Kelly kneel down, giving the Grey Cup to Toronto.

I don’t know about you, but I was in tears watching the game’s Most Valuable Player and Most Valuable Canadian Henoc Muamba in tears celebrating on his own, with his teammates and the most touching moment of all, with his daughter. We live in a cynical world where it is easy to be skeptical of anything presented in front of us but that exchange on stage between the Argonauts’ linebacker and TSN’s Darren Dutchyshen was a cynicism-destroying moment that was a lovely reminder of how wonderful sports can be. That moment had everything.

A player that has devoted so much of his life to charity, to giving back to his community, that his name is always mentioned when it comes time to give out the Jake Gaudaur Award, Muamba has been plying his trade at an all-star level for over a decade without winning a title. When he finally does it, it is against the team who drafted him first overall more than a decade ago.

On the other side is Dutchyshen, who has battled back from cancer to return to where he belongs, on TV sharing his love for sports and for this game in his home province, nonetheless. I would apologize for this over-the-top sentimentalism, but I know I was not alone in feeling that on Sunday night.

As for the game, there were so many heroes giving it their all that my pick for Most Valuable Player was in flux all night. In the first quarter it was a battle between Andrew Harris (36 yards rushing) and Jackson Jeffcoat, who completed the rare defensive trifecta of sacking the quarterback, forcing the fumble, and recovering the fumble. On the Argonauts’ next possession, it was Jeffcoat swooping in to tackle Harris for a loss on second down, forcing an Argonaut punt near the end of the quarter.

The second quarter was about that one impressive Bombers’ touchdown drive giving Winnipeg its first lead of the game. Beyond that, all that stood out was Harris not getting a single carry and the frustration of Kurleigh Gittens Jr. after dropping his second pass.

The fascinating part when you look back at the third quarter was two of the game’s biggest heroes made critical mistakes. On Winnipeg’s touchdown drive that gave them a 17-14 lead, we saw Muamba drop a surefire Zach Collaros interception and Robbie Smith was flagged for being offside, wiping out a Shawn Oakman sack that would have ended the Bombers’ drive. Both miscues would play a part in Dakota Prukop’s second touchdown plunge of the evening.

Then of course came the fourth quarter that saw so much special teams madness, from all the blocks to the record-setting 102-yard punt return touchdown by Janarion Grant and of course the late game heroics by backup quarterback Chad Kelly.

An afterthought/short yardage quarterback, Kelly guided his team to the game-winning touchdown after McLeod Bethel Thompson dislocated his thumb, with the key moment being a 20-yard scramble on second-and-15.

Like you, I did not see that fourth quarter coming.

I didn’t expect Kelly to be a hero or Smith to rebound from his second costly penalty of the night (the facemask penalty he committed on Collaros) to the game-winning block on the Marc Liegghio 47-yard field goal attempt. Like so many of you, I thought Winnipeg would win. But that is the bigger picture beauty of this game. It’s that cliché that on any given day, anyone could win and on Sunday night we saw that cliché in all its glory.

Both things can be true, that the Blue Bombers were the CFL’s best team in 2022, statistically and with the eyeball test both confirming that undeniable fact. The flip side is Toronto was the better team in Regina and deserved to come out on top. Like they have done in 2012 and 2017, Toronto came in as the underdog against a superior Western foe and found a way to win.

Much credit must go to general manager Michael ‘Pinball’ Clemons. Not only did he bring in players like Ja’Gared Davis and Andrew Harris but he also believed in this team and didn’t make any changes after they slipped below .500 when they lost to the Calgary Stampeders 22-19 in Week 11.

What made this game so great is that we had no idea what we were in store for. Be honest, early on you were worried the Grey Cup would end up being a defensive slugfest with physical play to be admired but also too many punts and not enough drama.

Instead, we had a contest with so many plot twists it would be impossible to list all the heroes and turning points. If Winnipeg’s quest for a three-peat had to come to an end, I’m glad it was at the conclusion of such a memorable night.

Coach O’Shea, his staff and his players should all be commended for the season they’ve had and the run they are on. I’m thrilled for players so deserving like Henoc Muamba. I will never forget his big moment on stage reaping all the rewards he deserved and I love the fact we get to end a memorable CFL season on such a high note.