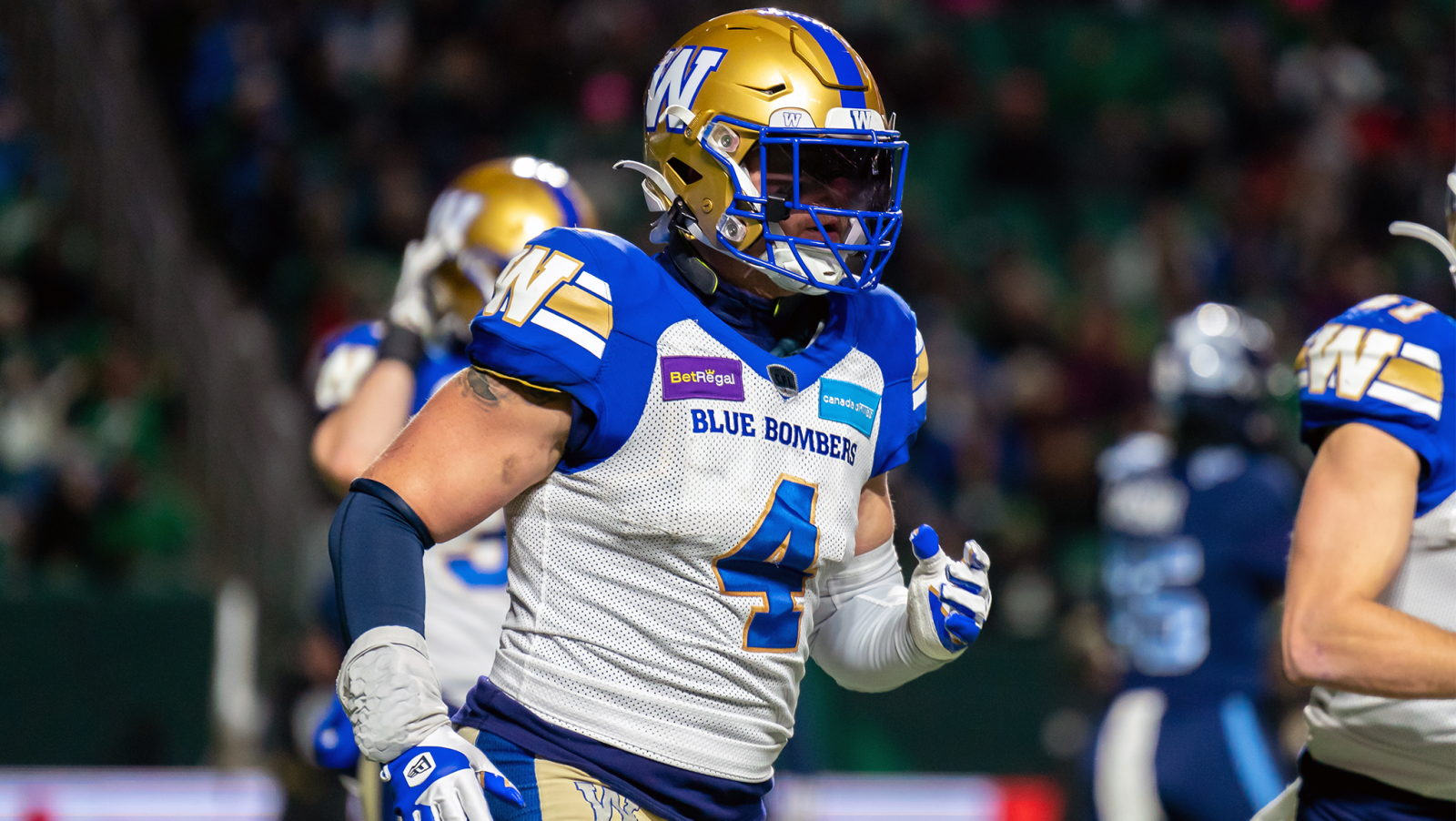 A suggested title for the Adam Bighill story, should his compelling tale ever be written, ‘all gas, no brakes.’

The Winnipeg Blue Bombers’ veteran linebacker and leader – who is seemingly non-stop from the moment his eyes open each morning in raising a family, working in the financial services industry and serving as a game-changing all-star defender – jotted his name on a two-year contract extension on Tuesday to remain with the club.

And with that news curses were heard across the Canadian Football League from opposition offensive coordinators and players.

“It signifies my commitment here to Winnipeg and the city and the club,” said Bighill of the two-year deal, which will include guaranteed money in the second season. “Whenever it is I decide I do want to retire – it’s at least two years down the road, maybe more – but I knew it wasn’t this year and I knew it wasn’t next. We’ve got a good thing going here and it made sense for me to be back, absolutely.”

Bighill’s return represents more than just what he brings in terms of his defensive statistics, as solid as they are. The Blue Bombers leader in defensive plays with 72 tackles, two sacks, one interception and a tackle for a loss, Bighill is also one of the respected voices in the locker room.

He’s a tone-setter as a player and his workouts and work ethic are the stuff of legend. And at 34, there is still plenty of fuel in his tank.

“What’s driving me? I’m still trying to be the best that I can be every day,” Bighill said. “The work that goes into that is something I focus on every day. Like I’ve always said before: if you take care of today and the work that needs to be done and you out-work those around you, then good things will happen as the season goes along and whatnot. I’m not going to lie; sure, it would be great to have another defensive player of the year honour or a very high stat year. Those things would all be great. But they aren’t the goal at hand, per se, that I need to achieve or are a must-have. Those are a byproduct of the work I put in and a little bit of luck here and there and making some plays that maybe others aren’t making.

To that end, Bighill who now has 10 years of CFL experience, asked his teammates for feedback from the Grey Cup loss to the Toronto Argonauts back on November 20th. It wasn’t an attempt to seek out some sort of personal gratification but, instead, part of his ongoing quest to better his game and his place in the league’s top-ranked defence.

“I talked to a lot of my teammates over the last week,” he explained, “and a lot of the questions I asked them were, ‘Did I make your job easier? Did I make you feel like we had a better chance of winning with what I was doing? What did I bring to the table that you thought was great?’

“I got a lot of good feedback. It was just to make sure I’m bringing to the level of details and the extra stuff for my teammates that I think is important. I do believe I’m bringing those things, but that’s why I asked them, just to make sure and sure enough the guys in the room had great things to say – guys I respect and their opinions – and it just validates once again why I do what I do in being able to help the guys in our locker room be the best they can be. That is definitely a personal mission of mine, no matter what happens with anything else.”

The team announced the Bighill news Tuesday morning, with Bighill retweeting the reveal with an ‘unfinished business’ message of his own.

“It’s not necessarily personally, but it’s definitely unfinished with the guys in the room, my teammates,” he said. “This last year didn’t end the way we wanted to; we were one point away from going into overtime and a lot of things could have gone differently for us in that game. We know how good we are and what we have in that locker room and the special things that are still yet to come.

“I still want to be a part of that and that’s the ‘unfinished business’ – there’s a lot of good things still yet to come and I’m looking forward to those things.”

Bighill was also honest and upfront when asked about the balance between keeping together a Blue Bombers core that helped lead the team to a franchise-record 15 wins and the reality that their window as a championship-calibre squad will only stay open for so long.

“It’s a great question. This doesn’t go to infinity,” he said. “I think we can all know that, and everyone’s probably curious for how long it can go. I mean, I’m curious as well.

“We’ve seen what our group can do up to this point. I’d expect guys to still bring it. I don’t think we’re near that end of the road yet by any means. It didn’t show this year, and I don’t expect it to show next year.

“But it’s something we realize that it’s more towards the end of the road than it is the beginning, just based on the makeup of our roster. But with that being said, there’s a lot of good football ahead of us to be played by our squad and a lot of our veterans. And that’s really all we need to focus on is next year and what’s in front of us.

“We’ve got a lot of the guys so far ready to come back and do it again and put ourselves in a good chance to make another Grey Cup run.”