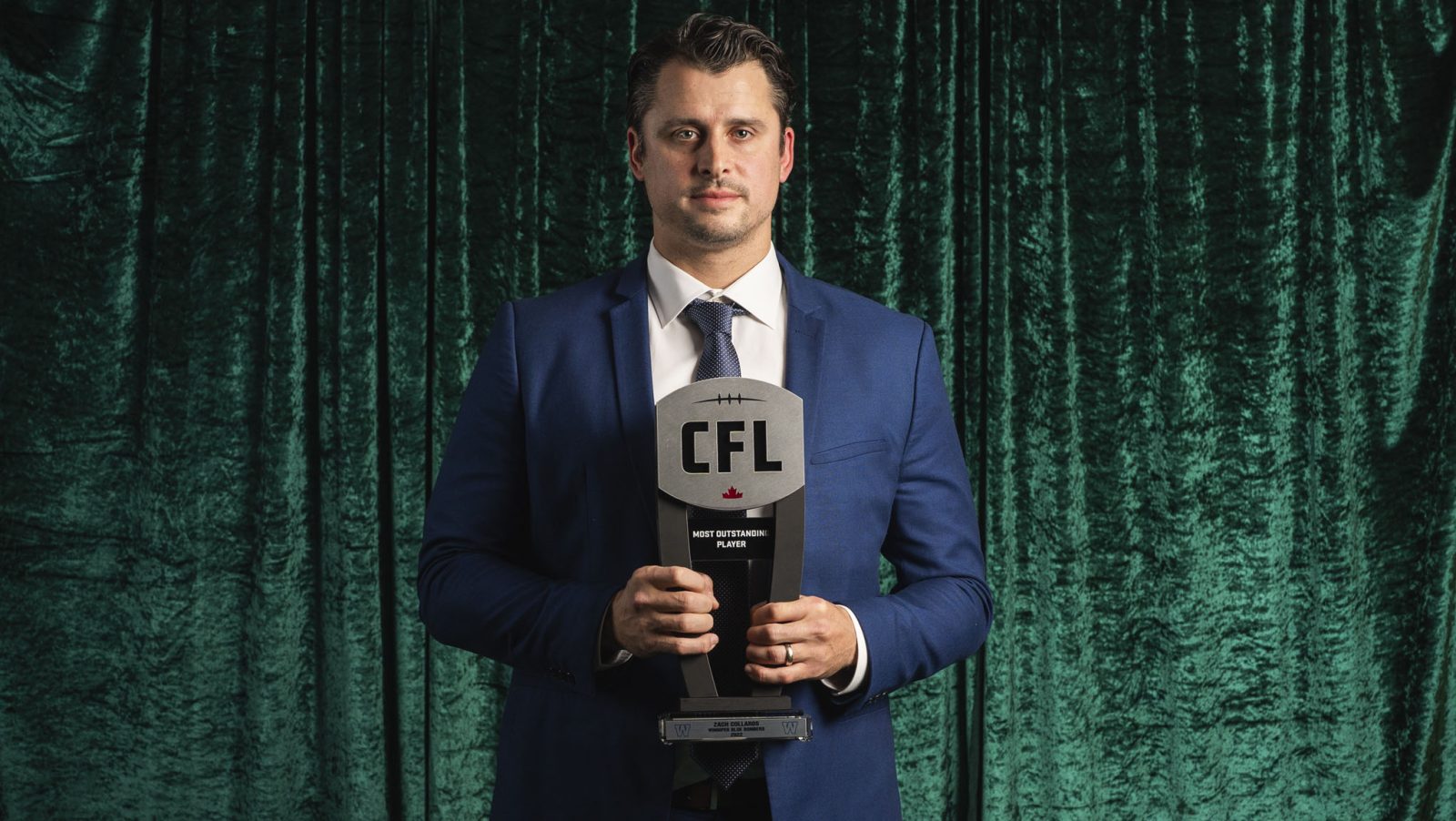 As the calendar year draws to a close, we’ve got another fun countdown for you. Some of our top moments of 2022 were spectacular plays at key junctures of games. But we also have milestones, impressive accomplishments, and a sentimental farewell on this list as well.

When Winnipeg quarterback Zach Collaros was named 2022 Most Outstanding Player, he was breathing rarified air. Collaros joined Jackie Parker, Dieter Brock, Doug Flutie and Anthony Calvillo as the only players in CFL history to capture the league’s highest individual honour in back-to-back years.

And he did it in dominant fashion. Collaros led the CFL with 37 passing touchdowns and finished second in passing yardage and QB rating. Additionally, he helped the Bombers to their second straight dominant season and a franchise record 15 wins.

Agonizingly close to their first home win since 2019, everything changed for Edmonton on one huge play.

Leading the Montreal Alouettes 18-17 in the fourth quarter, the Elks were threatening at the four-yard line with a chance to move into the driver’s seat. But Montreal defensive back Adarius Pickett knocked down a Taylor Cornelius pass into the arms of linebacker Tyrice Beverette, who returned it 100 yards for what would be the eventual game-winning score.

Toronto’s Andrew Harris hit a major milestone in style as part of a 31-21 road win over Saskatchewan. Harris’s 143 rushing yards put him over 10,000 for his career, allowing him to join a very small fraternity.

In front of almost 11,000 fans at Acadia’s Raymond Field in Wolfville, N.S., the Argos and Riders put on a show in the return of Touchdown Atlantic. Those in attendance got a back-and-forth game that came right down to the wire and was sealed by incredible defensive heroics.

Trailing 24-22 with less than three minutes to go, Toronto’s Wynton McManis picked off Cody Fajardo for a 50-yard touchdown return to retake the lead. A Brandon Banks catch on the ensuing two-point conversion gave the Argos a 30-24 lead, which would end up being the final.

Calgary entered week 6 at 4-0 and was in a heavyweight showdown on the road against 5-0 Winnipeg. This battle of unbeatens didn’t disappoint and was sealed on a crazy turn of events.

Trailing 26-19 with less than a minute to go, Kamar Jorden made a spectacular diving catch in the endzone on a great pass from Bo Levi Mitchell. But the force of Jorden falling to the ground popped the ball into the air, which was picked off in in impressive fashion by Demario Houston to seal a sixth straight Bombers win to start the year.

We all thought Andrew Harris was done for the season. And then there he was on top of the depth chart for the Argos ahead of the Eastern Final at BMO Field against Montreal. And he returned to action with a bang.

In a game where they never trailed, Harris opened the scoring for Toronto with a six-yard touchdown run on their first possession. The Argonauts never looked back and Harris was hoisting his third straight Grey Cup a week later.

Stampeders head coach Dave Dickenson had already made the difficult decision to replace Bo Levi Mitchell with Jake Maier on top of the quarterback depth chart earlier in the season. But in Calgary’s final home game of 2022, the McMahon Stadium crowd got to send off Mitchell in deserving fashion.

With less than three minutes to go, Mitchell came in for the Stamps and was given a standing ovation in what was his last game in red and white. With two Grey Cups, two Most Outstanding Player awards and multiple team records, Mitchell goes down as one of the best to ever wear Stampeders colours.

Our final three moments come from what was one of the most eventful, tense, explosive, and exciting Grey Cup games we’ve seen in a long time. And they all came in the fourth quarter, starting with Janarion Grant’s fireworks.

On the first play of the final frame, Winnipeg’s electric returner took a John Haggerty punt 102 yards to the house for the longest punt return in Grey Cup history. Grant gave the Bombers a 23-14 lead, which was only the beginning.

Toronto responded to Grant’s touchdown with a field goal on the following drive to cut the lead down to six. A few minutes later the Argonauts went to work on what would be the eventual game-winning drive. Only it wasn’t their No. 1 quarterback at the helm.

McLeod Bethel-Thompson had been forced to the sidelines due to injury, which meant the weight of Toronto’s season was on Chad Kelly’s shoulders. And he delivered. In his second series under centre, Kelly got the Argos to the five-yard line, where A.J. Ouellette took over for his second touchdown of the game and a 24-23 lead. That would end up being the final score.

Except this game was far from over. With just over two minutes remaining, Boris Bede’s 42-yard field goal attempt was blocked. With new life, and only a one-point deficit, it felt like destiny was in Winnipeg’s hands as they moved the ball into range for a field goal try of their own.

But from 47 yards, with an opportunity to clinch a third consecutive Grey Cup, Marc Liegghio’s try was also blocked. That’s right, we saw two blocked field goals in less than 90 seconds. The second came courtesy of Robbie Smith and clinched an incredible victory for Toronto.