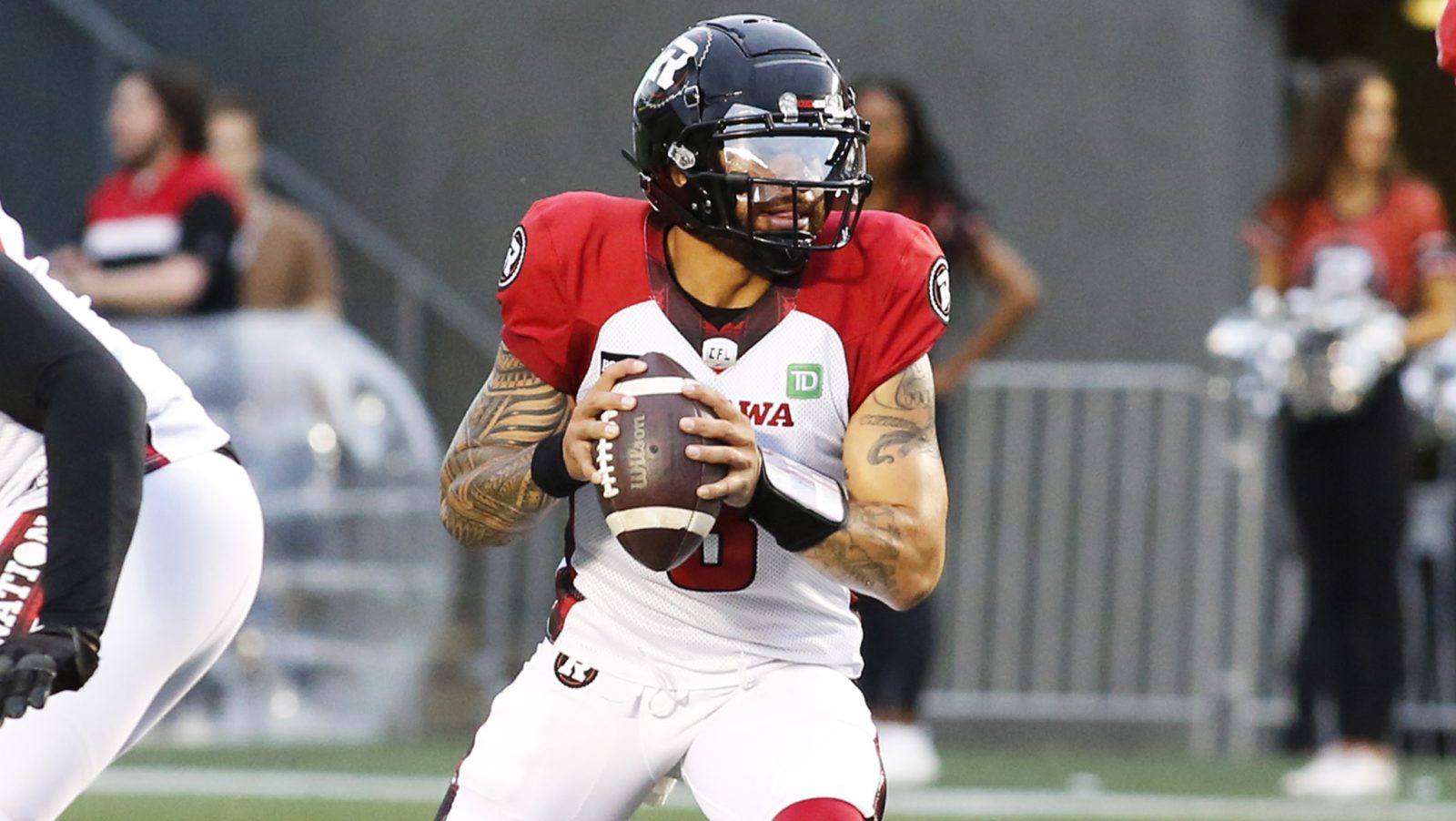 It’s no secret things have been a struggle in Ottawa since their last Grey Cup appearance in 2018. The REDBLACKS struggled through a pair of three-win seasons before finishing the 2022 campaign at 4-14. But a couple of important transactions last week got me feeling optimistic about the season ahead.

The first of those moves saw the REDBLACKS extend quarterback Jeremiah Masoli through the 2024 season, which makes sense. Ottawa and Masoli agreed on a two-year contract in free agency just under a year ago, but the veteran pivot had his first season ended due to injury in Week 5. By extending for another year, it gives Masoli the chance to truly fulfill his initial commitment.

And if you remember, the early returns for Masoli in Ottawa were strong. The REDBLACKS played the powerhouse Winnipeg Blue Bombers hard in a season-opening home-and-home set. And, despite a pair of close losses, Masoli threw for 380 and 331 yards and instantly rekindled chemistry with fellow newcomer Jaelon Acklin. I really wonder how Ottawa’s season would have gone had Masoli been able to play something closer to 18 games. 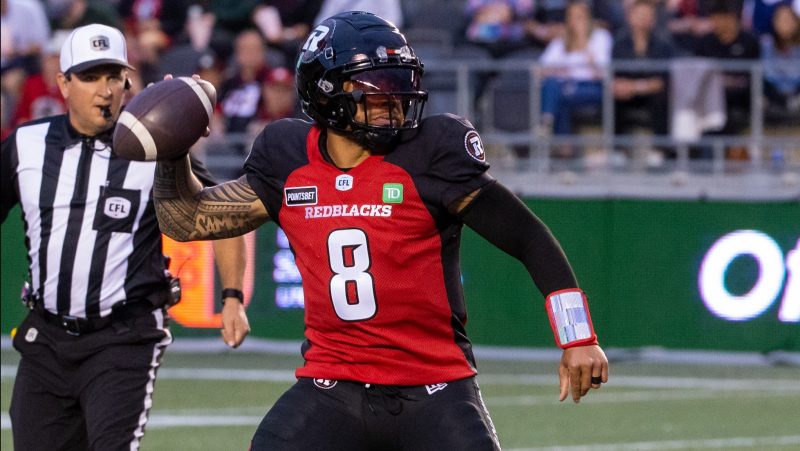 A healthy Masoli’s impact in Ottawa remains perhaps the greatest what-if of the 2022 season (Chris Tanouye/CFL.ca)

You can bet the 34-year-old Masoli, who also had his 2019 campaign cut short due to injury, is as motivated as ever with training camp on the horizon. Masoli told the Ottawa Sun in November he hoped to be back to full speed sometime in January after recovering from surgery and a subsequent infection. If all goes according to plan, Masoli should be fully ready to start the season on top of the REDBLACKS’ depth chart.

A couple days after Ottawa announced Masoli’s extension, they dropped the news of another huge return in defensive lineman Lorenzo Mauldin IV. Locking up the free agent and reigning Most Outstanding Defensive Player was huge for the REDBLACKS and adds even more optimism to what the coming season might hold.

Mauldin was dominant in his first season with Ottawa, which saw him explode for a league-leading 17 sacks and a career high 43 defensive tackles. With interior force Cleyon Laing also back for another year, the REDBLACKS have their two front four anchors locked up for what could be a huge season.

Ottawa has done a nice job retaining key pieces this winter. On top of bringing back Mauldin and Laing, the REDBLACKS have re-upped with receivers Nate Behar and Devonte Dedmon after career seasons. Special teams aces Lewis Ward and Richie Leone are back, too.

Second year general manager Shawn Burke and new head coach Bob Dyce still have lots of work to do. But with a healthy Masoli, plenty of core pieces returning and free agency around the corner, I’m excited for Ottawa’s 2023 prospects.

Many believed there was a chance Cameron Judge was in store for a strong season upon being acquired by the Calgary Stampeders from Toronto last off-season. Sure, Judge’s one and only year with the Argos was disappointing, but everyone knew the type of talent we were talking about. Well, the projections were correct and after re-signing with the Stamps last week, Judge is looking to make it two straight monster campaigns.

Judge was all over the field with Calgary in 2022. The 28-year-old linebacker matched or eclipsed career totals with 78 defensive tackles, five sacks, two interceptions, two forced fumbles, and two defensive touchdowns. As a result, Judge was named a CFL All-Star for the first time in his career.

Avoiding free agency was likely a no-brainer for both sides. The Stampeders get one of their most important defensive players back for another season. Judge, on the other hand, gets a second year with defensive coordinator Brent Monson after the two clicked almost instantly.

Next on the priority list for Calgary would have to be getting the same result with fellow linebacker Jameer Thurman. With Thurman at middle linebacker last season, the Stamps were able to slot Judge at his natural WILL position. Thurman and Judge quickly formed a dynamic duo, which is something Calgary would love to keep together. 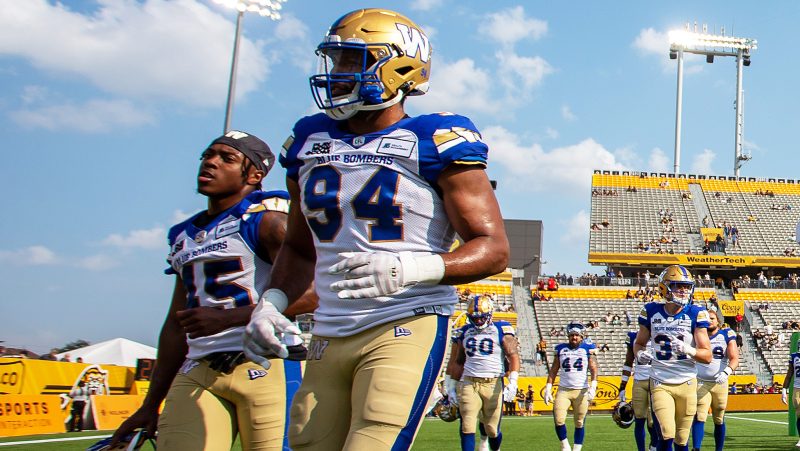 Jackson Jeffcoat is one of the pillars to the Blue Bombers’ success (Chris Tanouye/CFL.ca)

It’s been clear for some time the Winnipeg Blue Bombers had no interest in retooling or rebuilding in 2023. The three-time defending West Division champions are very much focused on running it back and making it four straight Grey Cup appearances. Last week saw two more core Bombers sign on the dotted line.

With Willie Jefferson already re-upping for another year, Winnipeg made sure the other end of the Texas Connection followed the same path. Of course, that would be Jackson Jeffcoat, who suited up in 12 regular season games last season and recorded four sacks, one interception and a forced fumble in the process.

A few days later the Blue Bombers agreed to terms with two-time West Division All-Star and special teams standout Mike Miller. The CFL’s all-time leader in special teams tackles (226 and counting) added 16 more to that total last season before racking up four in Winnipeg’s win over BC in the Western Final.

So who still needs a contract? Receiver Nic Demski and returner Janarion Grant, ranked sixth and 15th respectively in CFL.ca’s top 30 pending free agents, remain as such. The same is true for defensive backs Alden Darby and Nick Taylor among a few others. It’ll be fun watching how many more names return to the Bombers as free agency draws ever closer.