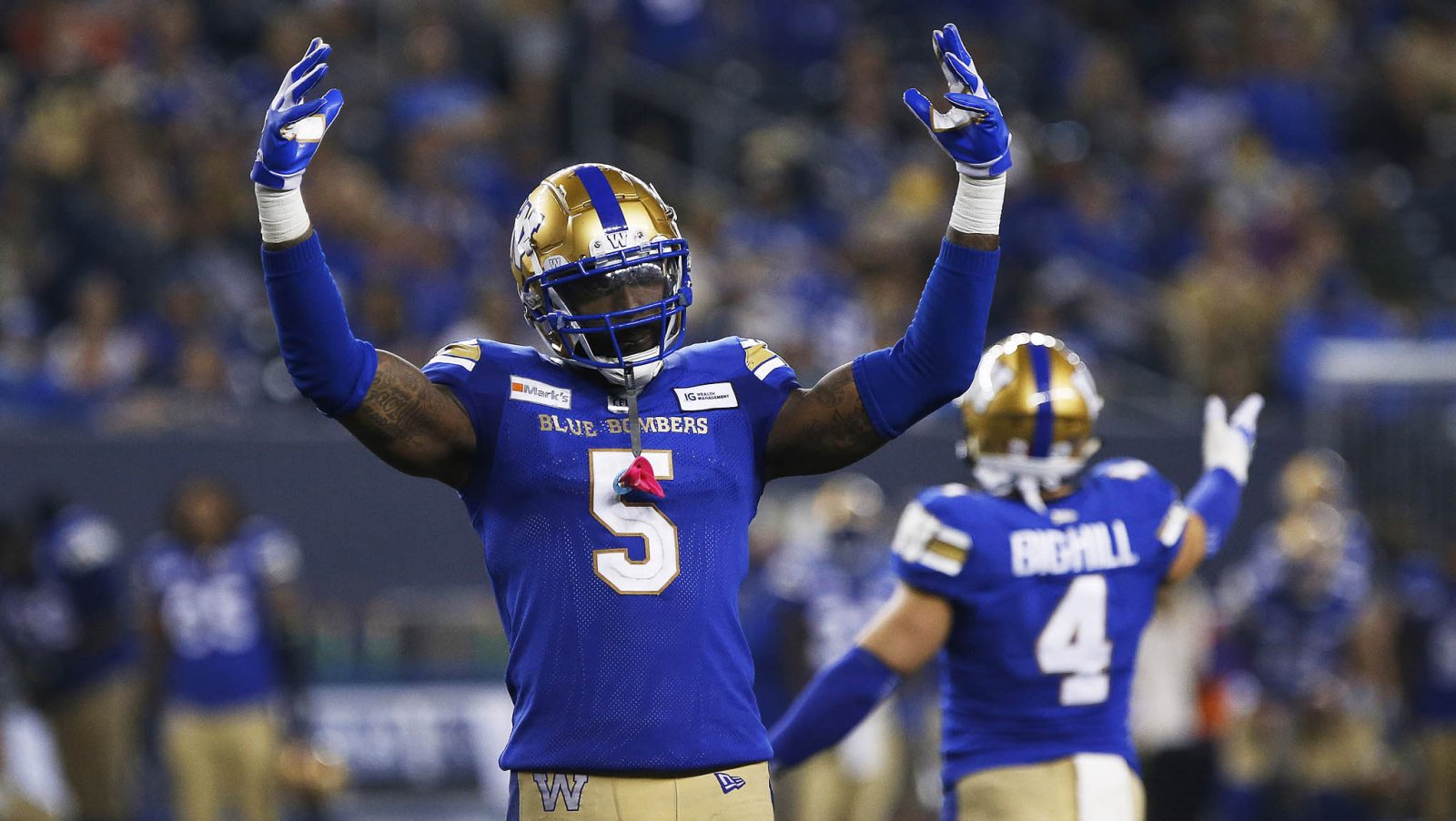 WINNIPEG — They were for 11 of their first 12 games — and the two that counted the most last year — the league’s unsolvable puzzle, its unstoppable force.

The Winnipeg Blue Bombers essentially rolled over the competition in 2021, building off of their 2019 Grey Cup run as if there were no pandemic or cancelled season sandwiched in between those two years. It’s easy to lose track of while it’s happening and even now, as the focus shifts to the coming season, but what the Bombers accomplished last year and how seamlessly they did it should make them one of the more impressive Grey Cup-winning squads in CFL history.

Appropriately, history is what the 2022 version of the Bombers face. The last time we saw a three-in-a-row Grey Cup winner was from Edmonton, whose run started in 1978. Those teams, of course, rattled off five in a row. If you need a reminder of just how hard it’s been to consistently win in the CFL, consider that the last team to win back-to-back Grey Cups came in 2009 and 2010, with the Montreal Alouettes.

Three-in-a-row is no easy task, but the Bombers are up for it, with the veteran core returning mostly intact, along with a few noticeable changes to the roster. 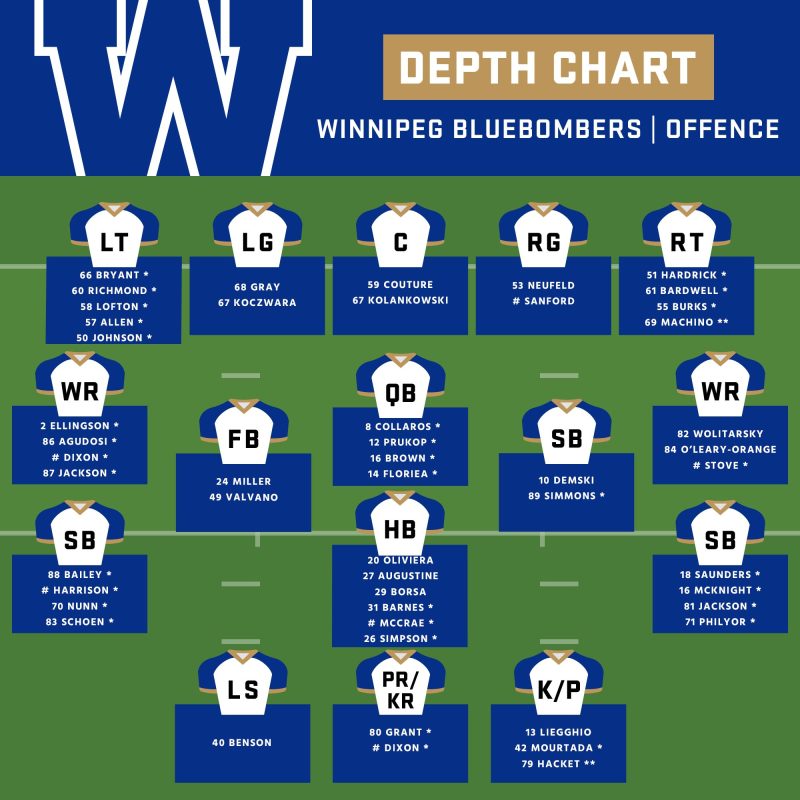 Andrew Harris‘ departure will be a dominant storyline around this team. Harris was a fixture with the Bombers, a local kid/field stomping running back that opted to come home in 2015, continued to rack up yards and accolades and eventually was able to help end the Bombers’ 29-year Grey Cup drought, blessing the city with a pair of titles in its wake. Possibly the best Canadian running back to ever play in the CFL, to picture Harris in another team’s colours — even if it’s a close match in the Argos’ Double Blue — will take a long time to get used to.

What will lessen the talk about Harris in Winnipeg as the season progresses is the performance of his replacements. Brady Oliveira is the expected starter, with Johnny Augustine also expected to get some of the workload this year. A Winnipeg-bred running back himself, Oliveira had 429 yards and a pair of touchdowns last year, filling in for an injured Harris at the start of the season. Augustine had 285 yards last year, highlighted by a monstrous 143-yard rushing effort late in the season against Calgary. If the Bombers get production on the ground from those two, they can stay Canadian at RB and their offence will remain a force despite Harris moving on in free agency.

Of course, none of the gains on the ground, or much of any offence for that matter, happens without the Bombers’ stellar offensive line. The team returns four out of five starters, having lost Drew Desjarlais to the NFL over the winter. That creates a great opportunity for Geoff Gray to move into a permanent starting position at left guard. The hole-opening ability that running backs thrive on and the fortress of solitude that all QBs pray for each week should be as consistent as its ever been for the Bombers.

That brings us to the reigning CFL MOP, Zach Collaros, who heads into his second full season as the Bombers’ starting quarterback. Collaros and offensive coordinator Buck Pierce worked extremely well together last year and while Collaros’ weekly numbers weren’t overwhelming — he went over 300-yards passing just once last year — he thrived making big plays in high-pressure situations as the wins stacked up faster and higher than any other team in the league.

Collaros will have some new faces in front of him when the Bombers open their season this year. Greg Ellingson comes over from Edmonton, replacing the departed Kenny Lawler and Jalen Saunders could have a big impact on the offence this year, after recovery from a car accident kept him away from the game in 2021. Rasheed Bailey, who finished third on the team in receiving last year (629 yards, five touchdowns) should see his role grow in the offence and Nic Demski, who was second in receiving on the team in 2021, could use this season to make his argument for being one of the top Canadians in the league.

The late-season arrival of Sergio Castillo, who was a perfect 5-5 on field goals in the Bombers’ Grey Cup win, shored up the one weakness that lingered around the team last year. Castillo jumped over to Edmonton in free agency, so the Bombers are back with Marc Liegghio and Ali Mourtada in the kicking game, with Global punter Tom Hackett looking to finally find his pro dream in the CFL. 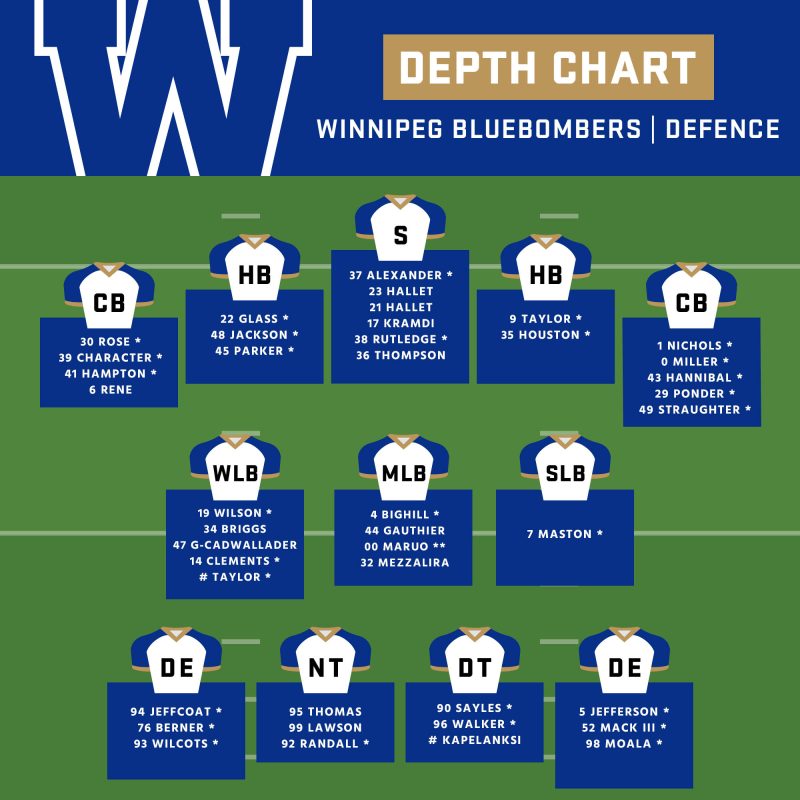 The beauty of a two-time defending Grey Cup championship team is that when you look over a depth chart you see a lot of familiar names. That’s the case with a Bombers’ defence that has struck fear in offences around the league for years.

Some quick numbers on the reason for that fear: The Bombers allowed just 216.4 passing yards per game last year; they allowed 12.9 points per game and a measly 15 touchdowns all season. Fourth quarters were the place where opponents’ offences went to die last year with the Bombers. The hope will be to do that again this year and there’s no reason to think it won’t happen.

There are names sprinkled through the defence, like Adam Bighill (a three-time winner of the CFL’s Defensive Player of the Year award), Willie Jefferson (DPOY 2019), Brandon Alexander and Winston Rose, that could serve as heartbeat-of-the-defence types on any roster in the league. That the Bombers have all of them is a reminder of why they’ve been so successful to this point.

The only people that don’t benefit from this situation are those looking to crack the roster as a new face on the team and see meaningful reps. This is a veteran group with proven pieces spread across the board. Barring injuries, opportunities could be hard to come by.

Mercy Maston is a good segue here. A key piece in the Bombers’ defence in 2019 at the SAM linebacker spot, he was lost for the 2021 campaign with an Achilles injury. He should slide back into that role and if he’s at the same level that he was when he left it, it’ll be his to hold onto. If he still needs time to try to find that form, this could be a spot where there could be a rare position battle in the Bombers’ camp.

We may get a glimpse of the Bombers’ future at safety to start the season.

The team has stockpiled a number of talented nationals on their roster either through the draft or free agency, like Nick and Noah Hallett, Redha Kramdi and Malcolm Thompson. Keep in mind that they drafted Tyrell Ford this year — possibly a steal at 13th overall — and they could have a great amount of Canadian talent at that spot for years to come. Head coach Mike O’Shea and defensive coordinator Richie Hall can dip into that National depth to start the season while Brandon Alexander recovers from off-season surgery.

The linebacking corps is led by Bighill, one of the best to ever play the position in this league. Next to him is Kyrie Wilson at the WILL spot, who if you’ll remember was the player that pulled in the tipped Jeremiah Masoli pass in overtime back in December to secure the Bombers’ Grey Cup win.

Finally, we have a defensive line that features Jefferson and Jackson Jeffcoat as defensive ends, two players that helped anchor a defence that was historically dominant in 2021. You have to be careful with hyperbole when you see greatness in a history-rich league like the CFL, but when the words come from an expert like BlueBombers.com’s Ed Tait, who has seen his share of Bombers’ football through a remarkable career, they should make you pause and think.

“Jackson Jeffcoat and Willie Jefferson combine to form the most ferocious and talented defensive end duo in franchise history, a span that goes back decades to 1930,” Tait wrote in his preview of the Bombers’ d-line (his positional preview of the entire roster is a must read, if you haven’t seen it yet).

The Bombers’ core has evolved over the last few years, with that leading to some significant change this season. Still, they remain strong and with Mike O’Shea and his coaching staff back in place, are poised to take a run at becoming a dynasty, the likes of which hasn’t been seen in the CFL in over 40 years.