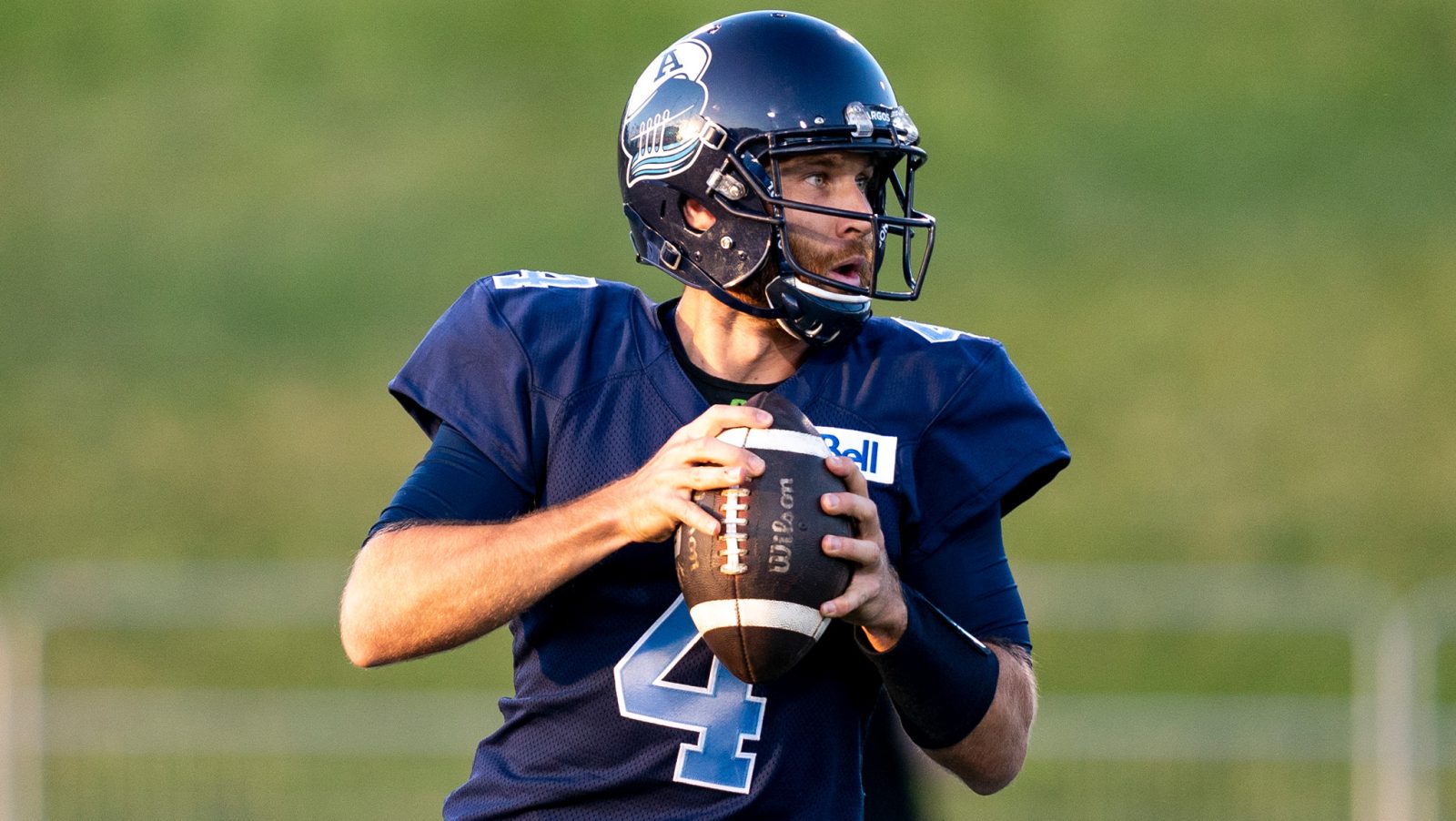 As we turn our attention to the Eastern Division, the question to ponder is whether Montreal, Toronto and (yes, even) Ottawa can put the pieces in place in order to knock Hamilton off the perch that the Tiger-Cats have owned the past two seasons.

Positional Battle: WRs Jaelon Acklin and Brandon Banks have new addresses, and with the return of 2019 East Division All-Star Braylon Addison, the Ticats will have targets available. Tim White is set to start at one slotback spot, while Anthony Johnson will seek snaps as backup boundary wideout. One, if not both, will add to the receiving corps while Lemar Durant opens the season on the six-game injured list. 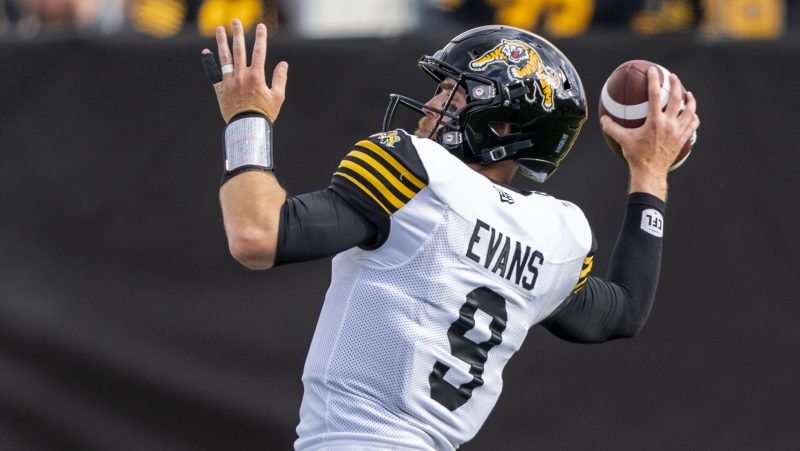 Dane Evans will have plenty of opportunity for big games now that he’s the clear-cut starter in Hamilton (Kevin Sousa/CFL.ca)

Quarterback: Dane Evans is the clear-cut starter now that Jeremiah Masoli is in Ottawa. Evans didn’t have a 300-yard outing in any of his three starts last season, yet has proven he can put up big numbers. Those lofty totals are possible with the number of returning wideouts on the roster, so a big 2022 is within reach for Evans. Shiltz arrives from Montreal as the top backup, with Jamie Newman serving as the third pivot.

Running back: Hamilton’s road to Regina will hinge on the durability of Don Jackson. Jackson played in just four games last season, putting up 295 yards on 44 carries. Jackson is the type of back that sets up the pass with his ability to wear down the front seven. The ever-versatile Sean Thomas-Erlington is also back with the Ticats, where he’ll be deployed in a variety of ways although Wes Hills had a strong training camp that put him ahead of Thomas-Erlington on the depth chart. Veteran Maleek Irons adds to perhaps the league’s deepest running back corps.

Receivers: Papi White, Steven Dunbar and Tim White answered the call of duty when injuries hit the Hamilton receiving corps last season. Tim White was named an East Division all-star after catching 56-774-2, while Dunbar reeled in 44 passes for 630 yards. Combined with Addison, the Tiger-Cats can come at opponents with an impressive trio of pass catchers. Papi White was also a huge contributor last year and returns to the lineup. David Ungerer III should open the season as a starter and will better the 15 catches for 187 yards and one touchdown he totaled last season.

Defence: Hamilton finished near the top in most defensive categories while also leading the CFL with 62 passes knocked down. They’ll stay among the league’s elite as CFL all-stars Simoni Lawrence and Jumal Rolle are also joined by East Division all-stars Dylan Wynn and Tunde Adeleke to give the Ticats an imposing presence for opposing pivots.

Fantasy nugget: Tim White will be fun to watch once he catches the ball. He was fourth in the league with 328 yards after the catch. He was one of just four players to eclipse 300 yards. 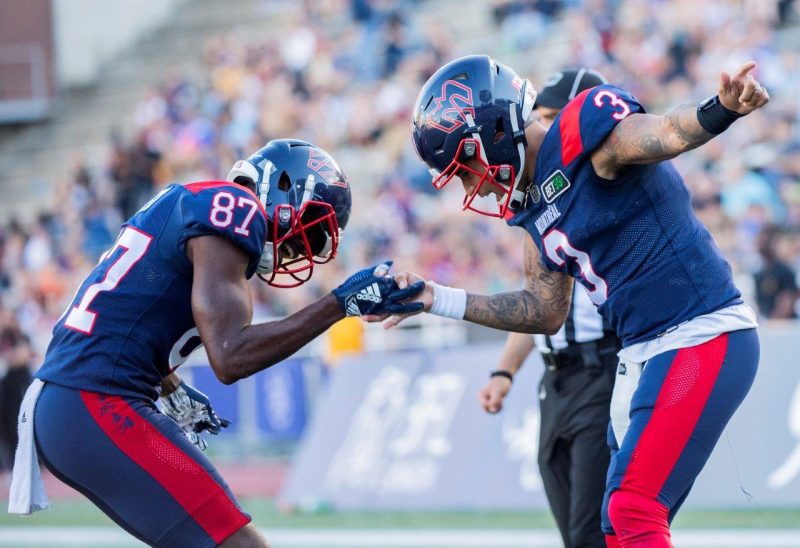 Vernon Adams Jr. leads what should be a very potent Alouette’s offence in 2022 (The Canadian Press)

Positional Battle: East Division All-Stars Jake Wieneke and Eugene Lewis are locked in as the top targets for Vernon Adams, Jr. Training camp was sparked by a spirited race to be the third option.

Quarterback: Adams led the league in TD percentage (5.9) and tossed eight of his 14 majors on throws of 20 yards or longer. He’s still dangerous on the ground and while he didn’t tally a rushing major last year, count on him to remain a threat in the open field. Montreal is set with veteran Trevor Harris as the backup. Harris led the league with a 70.3 completion percentage and helped carry Montreal to the postseason after the mid-season trade from Edmonton in the aftermath of Adams’ injury.

Running Back: William Stanback is possibly the best back in the league. After leading the CFL with 1,176 yards and a 6.1 yard average, he’s coming into the season in search of a third straight 1,000-yard campaign. After being stuffed in the Eastern Semi-Final, the Alouettes spent camp looking for ways to maximize the potential of Stanback. As the only back on the Week 1 roster, Stanback will get a hefty workload that assures fantasy users of tremendous numbers on a weekly basis.

Receivers: Lewis and Wieneke combined for 195 targets and are easily one of the best one-two combos in the league. The addition of  Mayala, the former first-round pick of the Stampeders, adds to the vertical firepower Adams has at his disposal. Reggie White Jr. put together some impressive performances last season, while Philpot, the ninth overall pick of this year’s draft is a lethal talent who can emerge as an impact player as the season goes on.

Defence: Montreal improved dramatically in 2021, tying for the league lead with 17 interceptions and topped the CFL with 49 sacks. The unit lost top sack artist David Menard, but the ageless Almondo Sewell anchors the front while linebacker Chris Ackie continues to rise up the rankings of the league’s best overall defenders.

Fantasy nugget: No team likes to dial it up more than the Alouettes. Adams led the league with 91 attempts of better than 20 yards in 2019, connecting on 46 with 13 leading to majors.

Positional Battle: The REDBLACKS revamped receiving corps included the additions of East Division All-Star Jaelon Acklin and former West Division All-Star Darvin Adams, but Justin Hardy, the NFL expat, has the chance to become the featured wideout. Shaq Johnson, who comes from BC, has also brimmed with talent and could become a factor in the offence.

Quarterback: Masoli gives the REDBLACKS’ offence the clout it has missed since the departure of Trevor Harris. The dual-threat will be the fulcrum of a squad that ranked last in almost every significant category in 2021. Masoli has the opportunity to return to the fantasy standout he has shown to be over the years. Caleb Evans, who started seven times last season, is the backup and could benefit from the league’s new rule that allows two quarterbacks on the field at the same time.

Running Back: Ottawa welcomes back William Powell, who ripped off consecutive 1,000-yard seasons for the REDBLACKS in 2018 and 2019. At 34, Powell is still capable of crossing the barrier again as he remains one of the league’s most versatile backs (38 receptions in 2021). The team also added Jackson Bennett, who will finally get a chance to see more touches after spending time in the logjam that was Hamilton’s backfield. Brendan Gillanders may see a target or two, but his presence is more valuable on both special teams and in the locker room. 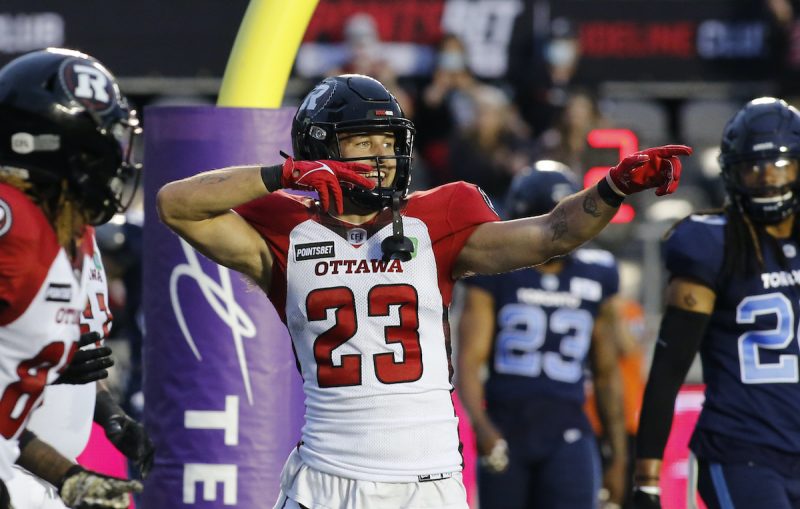 Jaelon Acklin could take a step forward as a player and a fantasy option in 2022 with the REDBLACKS (Patrick Doyle/CFL.ca)

Receivers: Even with all the new faces in the locker room, R.J. Harris will continue to be a factor in the passing game. Still, the REDBLACKS are excited to see what Acklin (50 receptions, 678 yards and four tochdowns with Hamilton in 2021) and Adams (league-best 17.0 yards per catch) can do with Masoli. Johnson is a solid presence who is better than the 9.8 yards per catch he managed at BC last season. If Hardy quickly adjusts to playing up north, Ottawa’s passing game can really take a big step forward.

Defence: Oh, yes, there are plenty of new faces on the defensive side of things, with the addition of former Alouettes defensive back Patrick Levels and Monshadrik Hunter. Linebacker Avery Williams finished third in the league with 89 tackles. The changes will go a long way toward turning the REDBLACKS to a stingier unit than they were the past two seasons.

Fantasy nugget: Masoli loves to go deep, but he’s pretty surgical when it comes to throwing the underneath stuff. He led the league with an 84 per cent completion rate on passing of 0-9 yards in depth.

Positional Battle: The question of getting the touches behind Andrew Harris is intriguing. Daniel Adeboboye, the second-round pick, is a dual threat who could top incumbent A.J. Ouellette as the RB2 in Toronto. If the Argos are committed to resting Harris on occasion, the backup could be a fantasy sleeper.

Quarterback: McLeod Bethel-Thompson was named an East Division All-Star for the first time, yet the Argonauts will be hoping for more from him after the offence finished seventh in yards per game and average yards per play. As his 2019 displayed, Bethel-Thompson is capable of much, much more. Former NFL draft pick Chad Kelly established himself as the Argos’ backup fairly early in training camp.

Running Back: Harris finished with 623 yards and seven majors in just seven games last season. He chose not to return to Winnipeg and will look to be the missing piece that will bring Toronto back to the Grey Cup for the first time since winning it in 2017. The team will likely choose to rest him on occasion while giving Adeboboye and Ouellette an opportunity to establish themselves as the future running back. 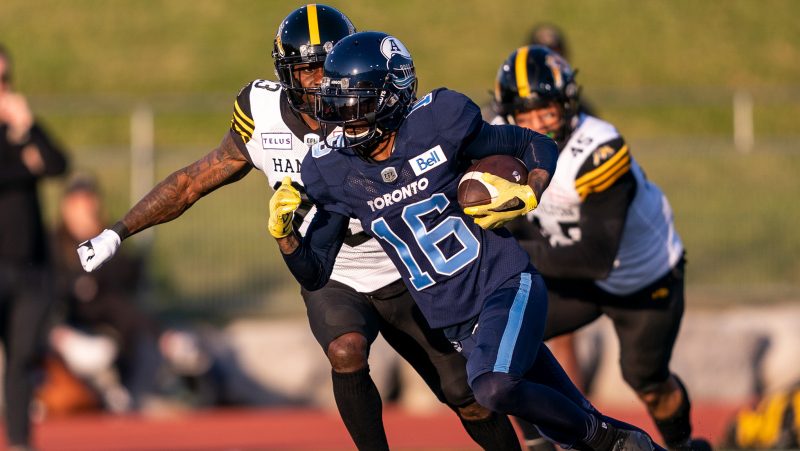 Brandon Banks will look to re-establish himself as an elite receiver and fantasy option with the Argos this season (Kevin Sousa/CFL.ca)

Receivers: With Eric Rogers ready to return, this receiving corps could go from good to great. He missed eight games last season but still managed 25 receptions for 346 yards and three touchdowns. Rogers’ absence opened the door for Kurleigh Gittens, Jr. to develop into Bethel-Thompson’s most reliable target, earning Eastern Division all-star honours with 50 receptions, 604 yards and four touchdowns. Veteran DeVaris Daniels reeled in 51 passes and will benefit from the arrival of Markeith Ambles (54 receptions 686 yards and three touchdowns with Calgary last season) and Brandon Banks, the 2019 Most Outstanding Player looking for a chance to return to his elite status.

Defence: Toronto went from allowing 31.2 points per game in 2019 to just 19.6 last season. The Argos, however, finished seventh in yards allowed, so there is still work to do if they want to consider themselves a Grey Cup-calibre defence. To that end, the team signed DL Ja’Gared Davis to pair up with fellow Eastern Division all-star Shawn Oakman up front. Defensive back Shaq Richardson also earned Eastern Division all-star accolades, while defensive back Chris Edwards led the league with 162 yards off interception returns, taking two for majors.

Fantasy nugget: Had Adams recorded enough catches to qualify, his 16.3 depth yards per route would have placed second in the CFL. He will add the deep threat the Argos, who had just 13 completions of better than 30 yards. The team will need to perk up the passing game this season.