The Argos and Ticats have one of the most storied competitive histories in the CFL and North American sports. The two southern Ontario clubs’ annual clash – the Labour Day Classic – dates back to the 1950s and has become destination viewing for Canadian sports fans, making it one of the longest standing rivalries in pro football history.

UNINTERRUPTED Canada offers an all-access feature documentary along with exclusive, behind-the-scenes social media moments, tracing the teams’ journey in the 2022 season to their annual September showdown. The documentary will present the teams’ up-and-coming and veteran stars and introduce them to a new generation of fans, while contextualizing the historical tension between the clubs.

The film will also pay homage to the fans and their devotion to their respective teams, while highlighting the unique passion of diehard supporters in southern Ontario.

RIVALRIES is sponsored by OK Tire in association with Blackhawk Tire – the title sponsor of the CFL’s Labour Day matchups.

Bell Media delivers RIVALRIES: THE QEW SERIES exclusively to viewers across Canada on TSN, with the hour-long film set to premiere in Fall 2022. 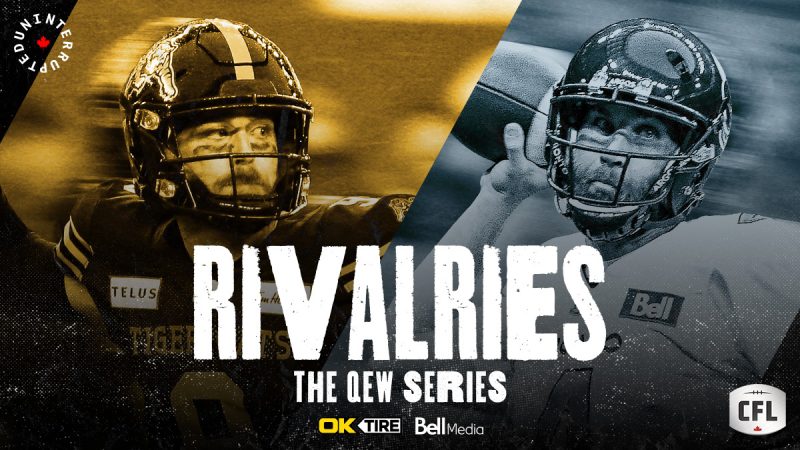 “The fierce and bitter tradition between the Argos and the Ticats has been handed down from generation to generation. We’re thankful to the CFL and both franchises for allowing us inside their front offices and locker rooms to showcase the many engaging personalities and the emotional journey that culminates each year with the Labour Day Classic.”

“OK Tire Labour Day Weekend is a CFL holiday tradition and we’re thrilled to present a behind-the-scenes, in-depth look at this storied matchup between the Argos and the Ticats. Intense rivalries and the inspiring stories of our players are at the heart of our league, and our incredible fans are the lifeblood that spreads the passion that the CFL is known for. We’re excited to share this next chapter of the Labour Day Classic with new fans, while celebrating all those who have helped build this rivalry for generations.”

“Separated by less than 70 km in Southern Ontario, the storied history of these two teams is one of the most compelling through-lines in Canadian sports. We’re thrilled to showcase this documentary, which gives  an intimate, behind-the-scenes view of what makes these franchises so special, and explores the unwavering passion behind this great Canadian rivalry. It will be one football fans won’t want to miss.”

“As a longtime CFL fan, I’ve been personally invested in the passion that embodies CFL rivalries.  OK Tire and Blackhawk Tires are excited to be a part of helping bring fans an inside look behind the scenes of the Labour Day Classic, always a key date on the Canadian sports calendar.”