TORONTO — A.C. Leonard, Lucky Whitehead and Boris Bede were named the CFL Top Performers of the Month for November of the 2021 CFL’s season. The selections include all appearances from Weeks 14 to 16.

The three players were chosen by a panel of judges made up of former CFL players Matt Dunigan and Duane Forde of TSN, as well as Pierre Vercheval of RDS, who independently send their selections to the CFL head office. 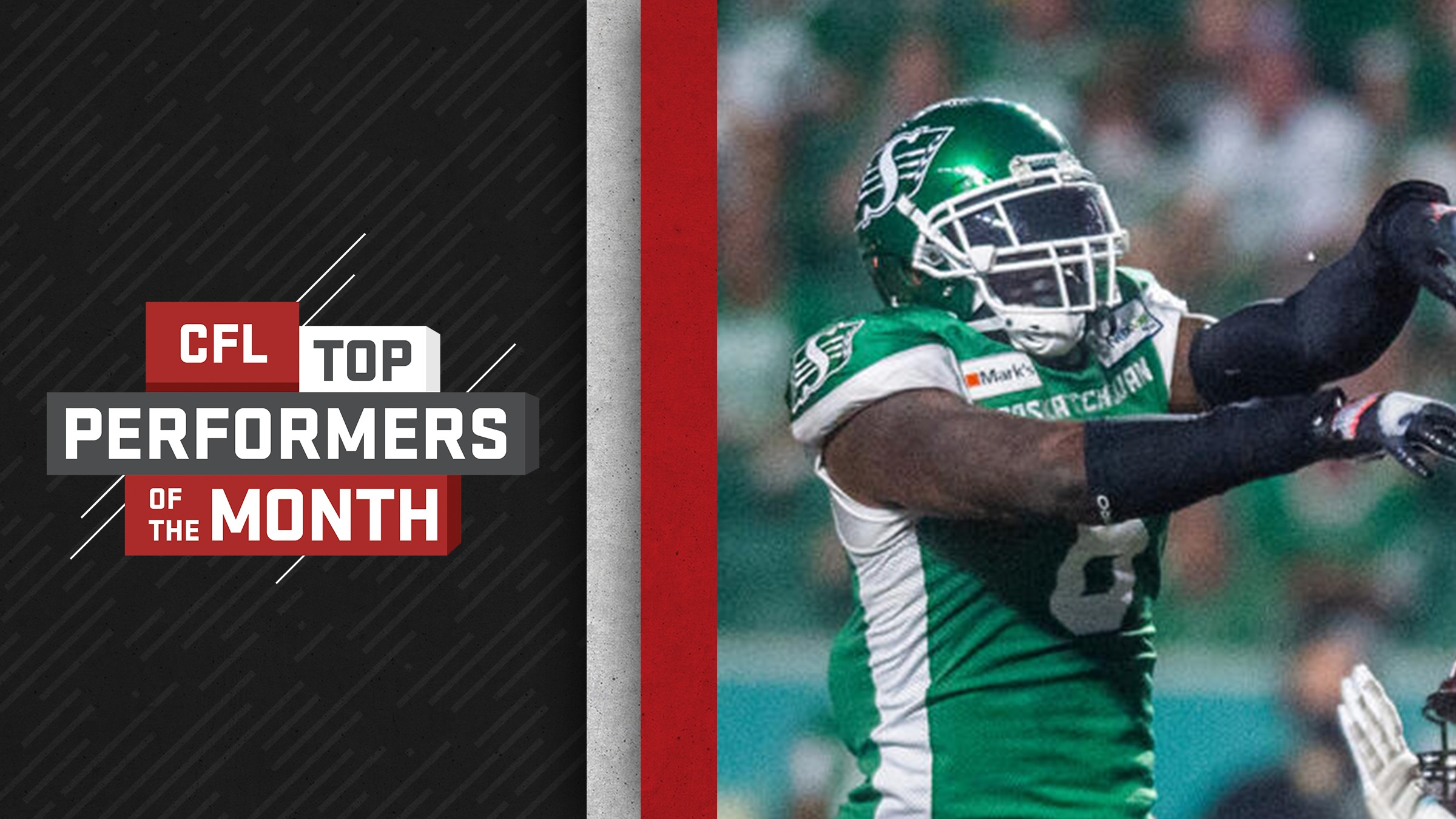 A.C. Leonard finished the final month of the 2021 campaign by tallying at least one sack in each November contest.

During the three-game stretch, Leonard totaled four sacks, 10 tackles, two tackles for a loss and a forced fumble, as the Roughriders claimed a pair of victories to finish the season with a 9-5 record.

In Week 14, the Tennessee State alum recorded two sacks, a forced fumble and a tackle for a loss in a 19-17 victory over the Edmonton Elks.

In 11 games this season, Leonard had a career-high 11 sacks, while notching 44 tackles and his first-career interception. 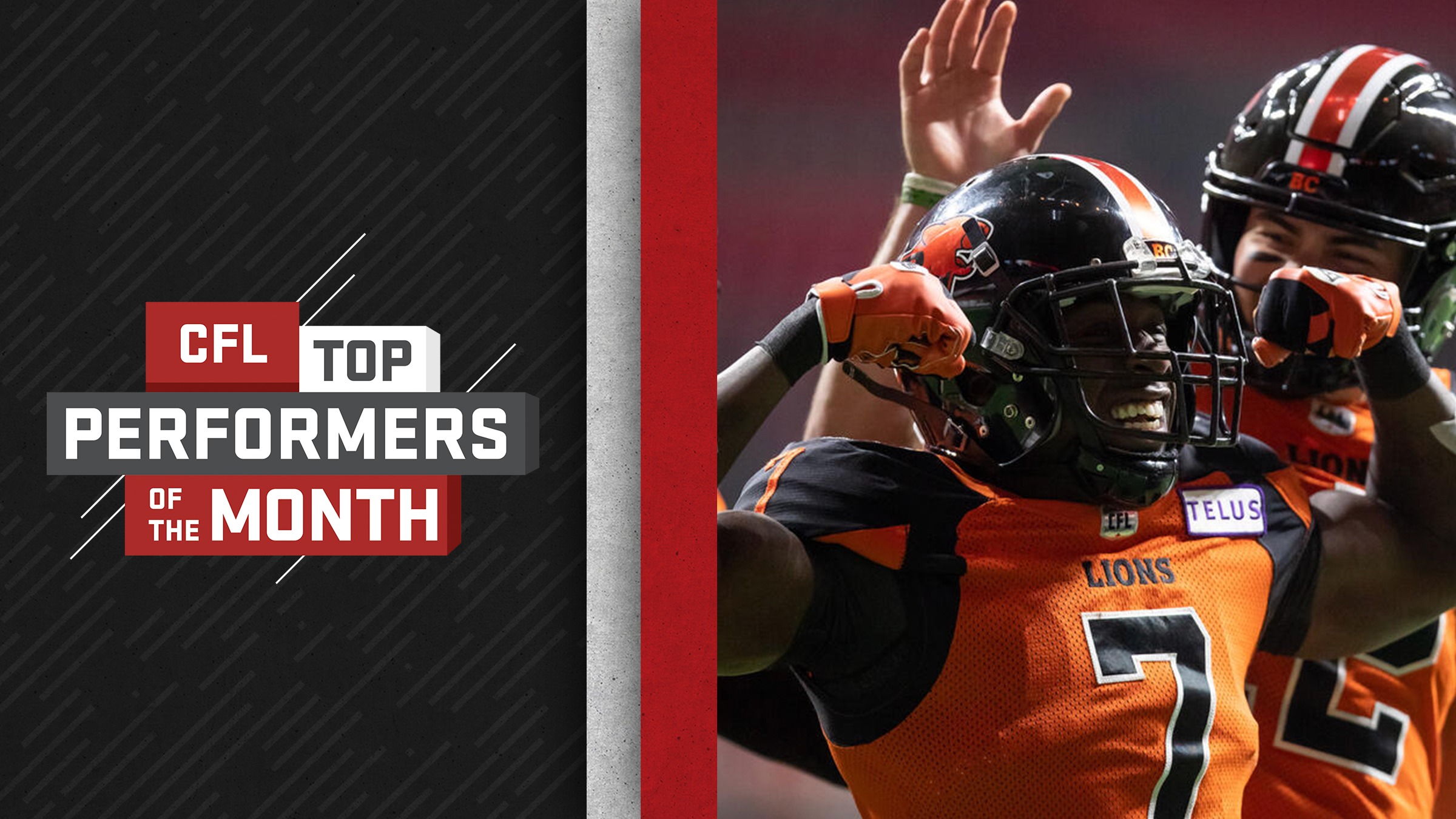 Lucky Whitehead recorded 22 receptions for 247 yards and a touchdown in the Lions’ three final games.

Against Hamilton in Week 14, he caught nine receptions for 98 yards. The former Florida Atlantic Owl ended the season on a high note, collecting 92 receiving yards and a 79-yard punt return touchdown against Edmonton. 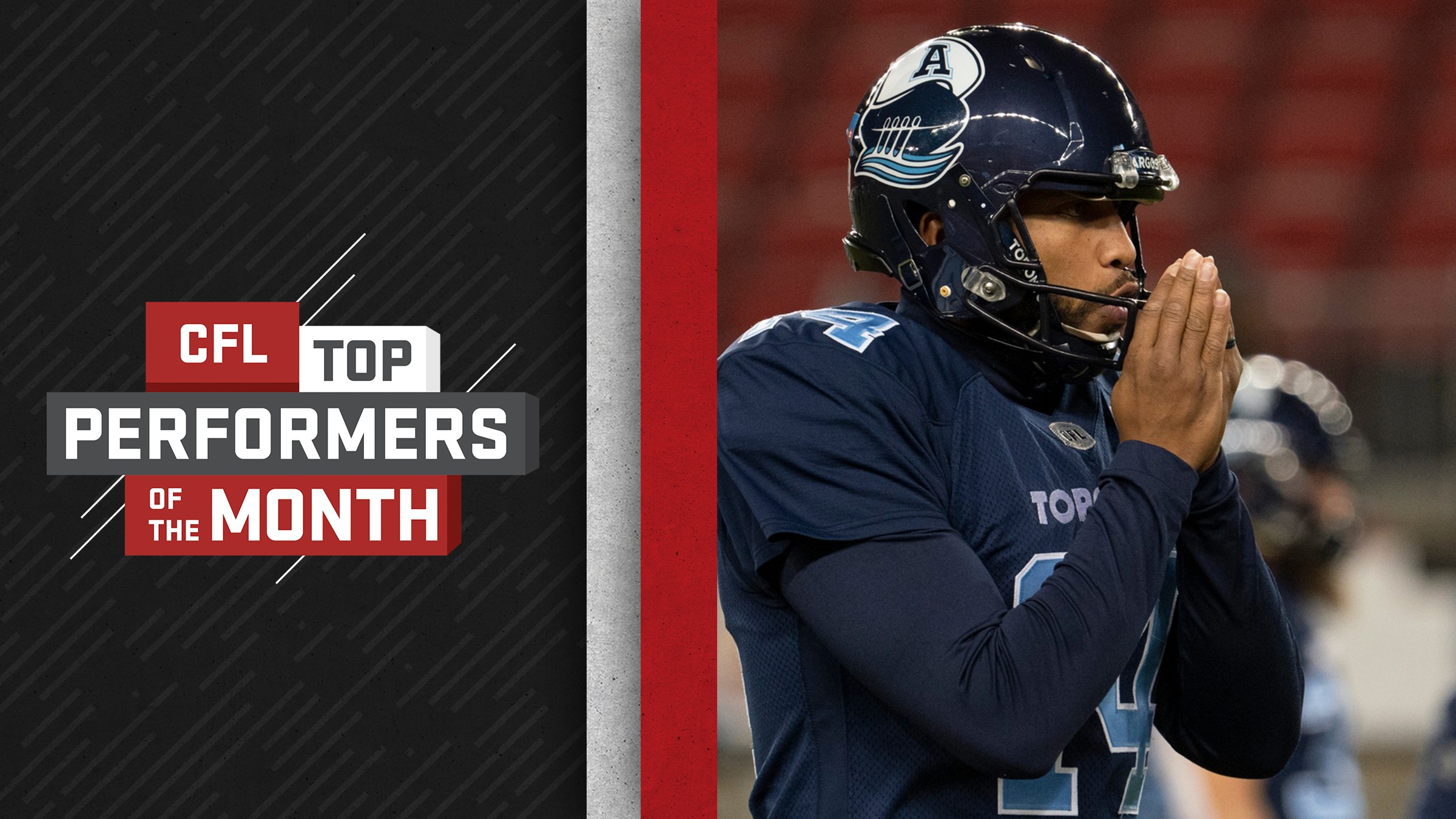 Boris Bede was a perfect 8-for-8, while adding 10 punts and taking care of kickoff duties, in two November contests.

His five field goals in Week 14 were instrumental as the Argonauts edged past the REDBLACKS 23-20. With the East Division crown on the line in a pivotal Week 15 matchup against Hamilton, Bede’s three makes helped Toronto secure a 31-12 victory.

This season, Bede converted 84.8 per cent of his 33 field goals attempts, while averaging 44.2 yards per punt and 67.4 yards per kickoff.

TORONTO — Nathan Rourke, Johnny Augustine and Davon Coleman were named the CFL Top Performers of the Week for Week 16 of the CFL’s 2021 season.

The three players were chosen by a panel of judges made up of former CFL players Matt Dunigan and Duane Forde of TSN, as well as Pierre Vercheval of RDS, who independently send their selections to the CFL head office. 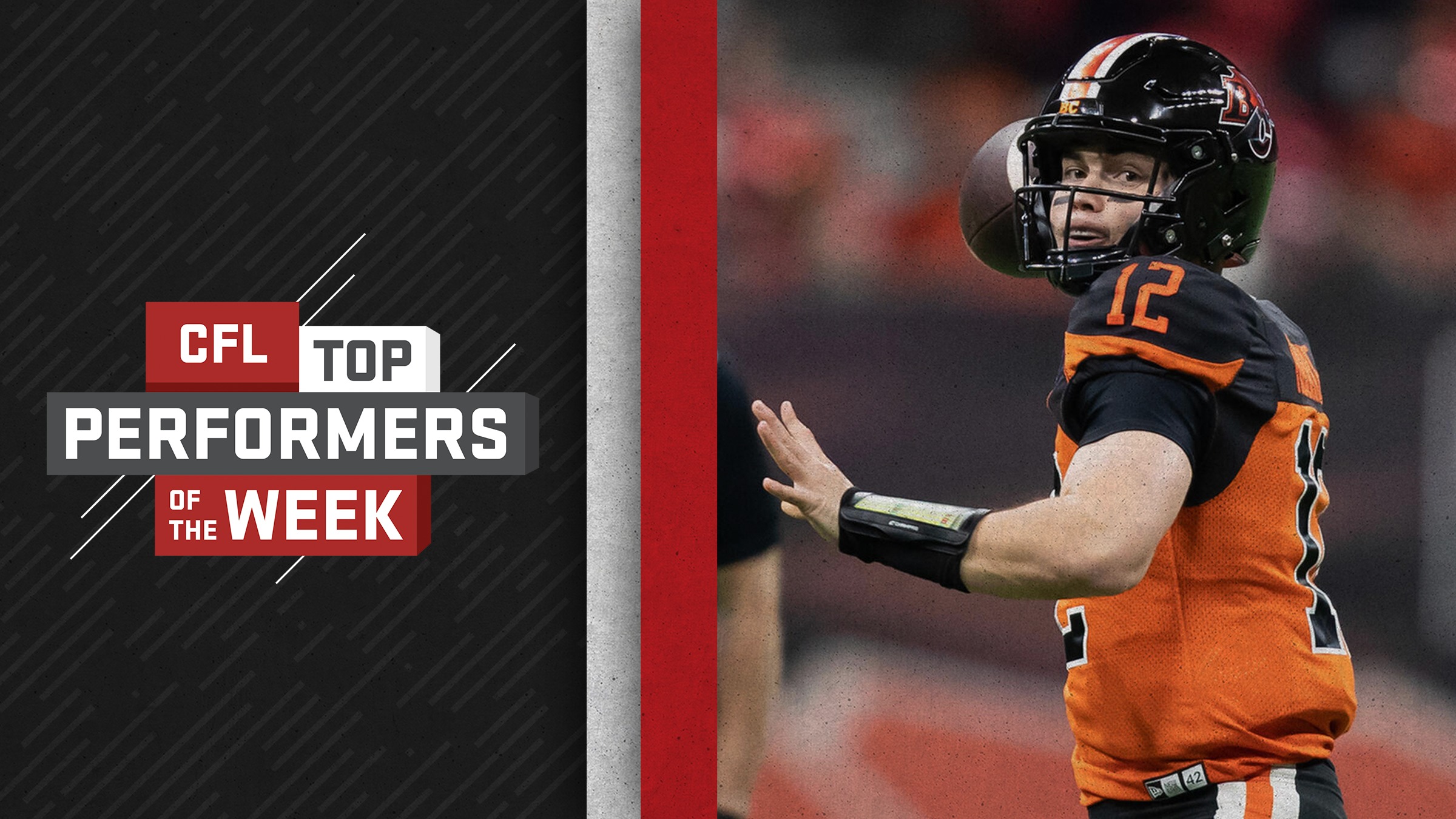 Nathan Rourke made a statement to close out his rookie campaign as the Lions clawed their way to a convincing 43-10 victory over Edmonton.

In his second career start, the young pivot established new career marks in completions (23), attempts (34), passing yards (359), carries (seven) and rushing majors (three) in a single contest. He also added a single touchdown through the air, finding Bryan Burnham in the end zone, which staked the home side to an early 6-0 advantage.

The Oakville, Ont., native punched it in from one yard out for his third rushing touchdown of the year before the game was 10 minutes old. Rourke would go on to run in his two final touchdowns in the second frame to build a 26-0 lead.

The former Ohio Bobcat threw for 754 yards and three touchdowns, in addition to collecting 111 rushing yards and five majors on the ground, in his first season in the CFL. 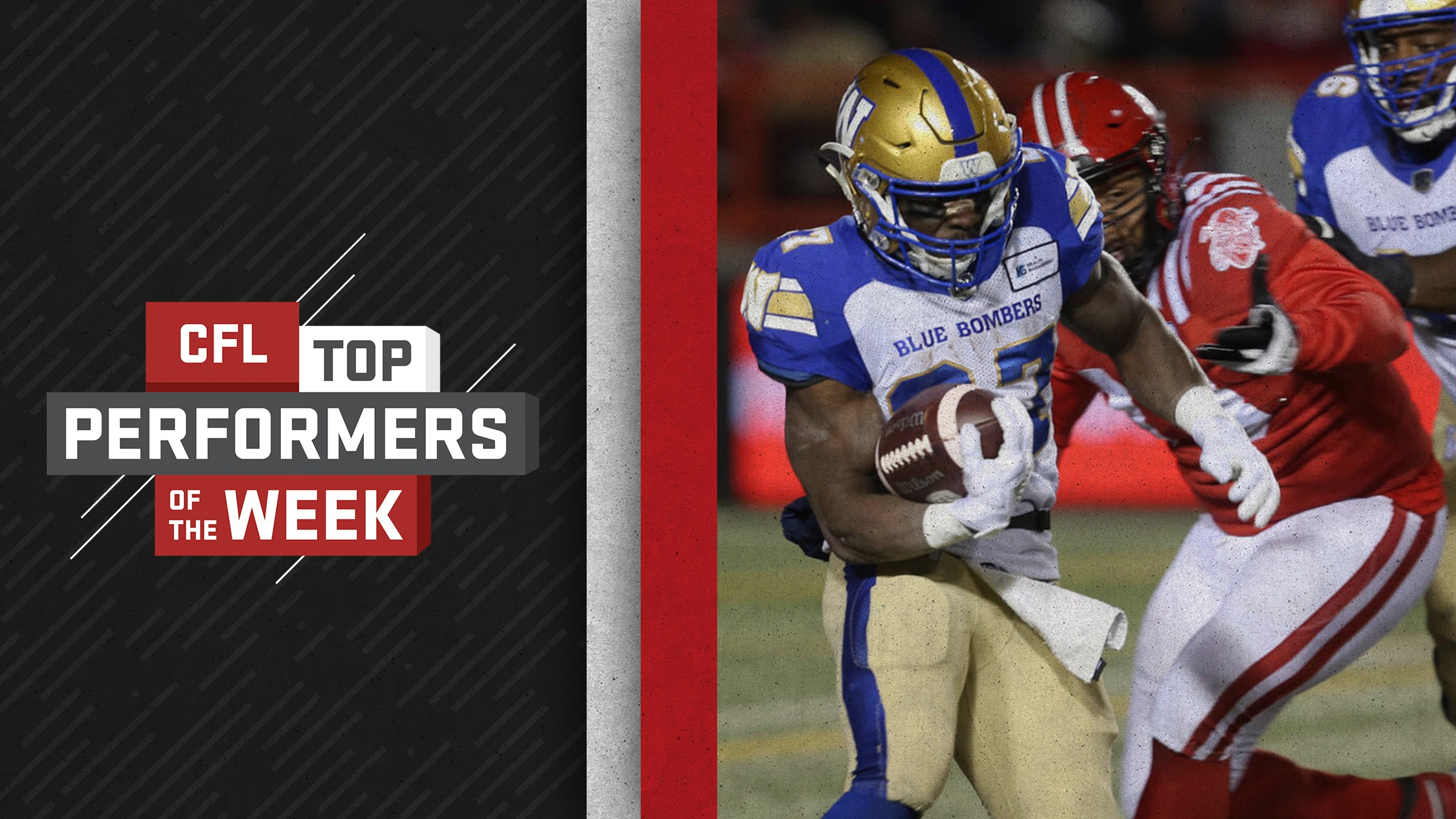 Johnny Augustine rushed for a career-high 148 yards as Winnipeg concluded its regular season with a 13-12 loss to Calgary.

In the first half alone, the former Guelph Gryphon collected 121 rushing yards to surpass his single-game career-high of 98, set in 2019. He finished with 23 carries, including six rushes of 10+ yards and one for 20+ yards.

In his third season with team, the Welland, Ont., native has accumulated 285 rushing yards, while averaging 7.1 yards per carry. 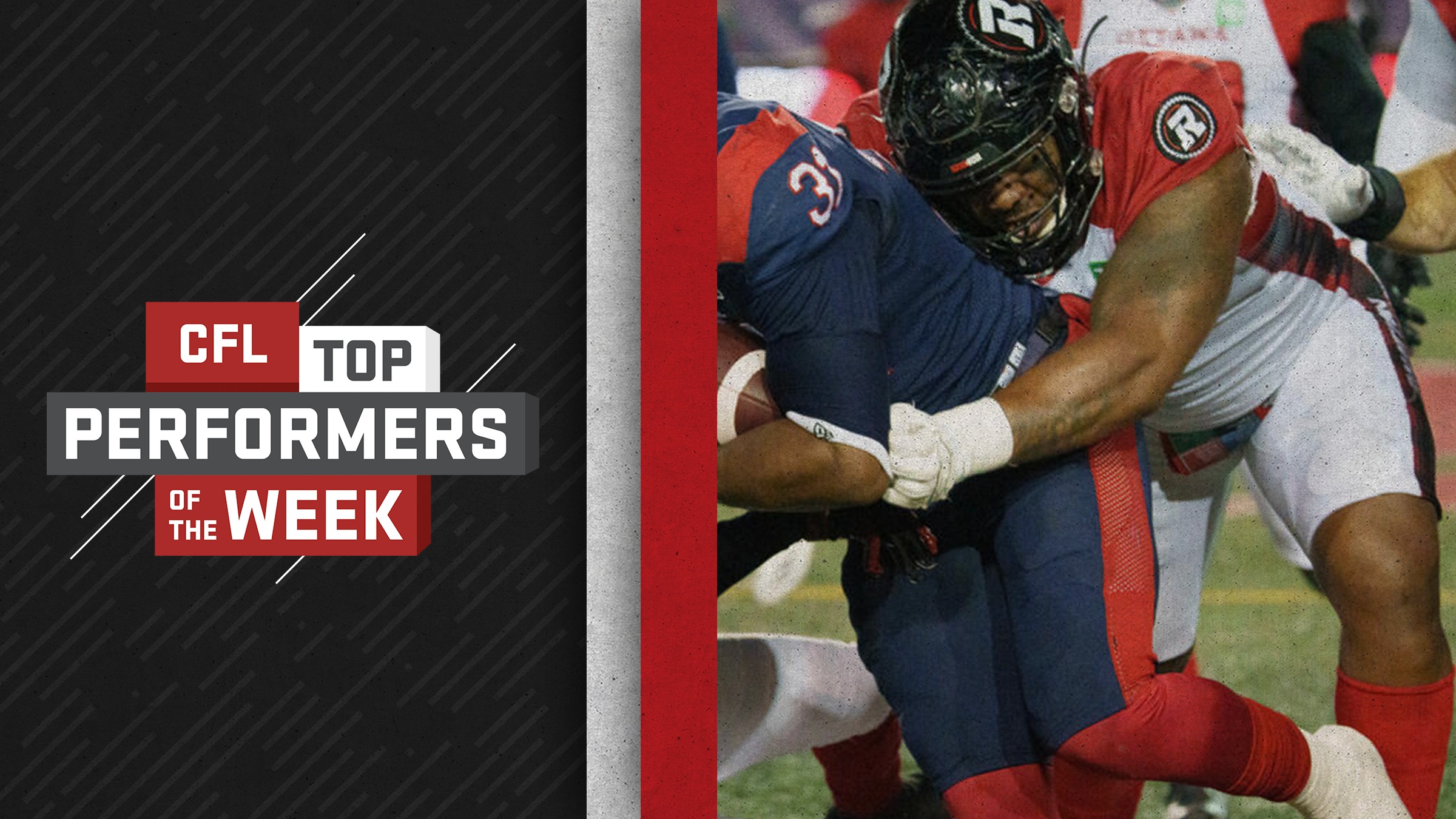 Davon Coleman recovered two key fumbles in Ottawa’s 19-18 come-from-behind victory to close out the 2021 campaign on a high note.

Coleman registered two tackles, two fumble recoveries and a sack in the contest. His first fumble recovery came on the second play of the second half, and led to the REDBLACKS’ first touchdown, which cut their deficit to nine points at 18-9.

In the game’s final minutes, the Arizona State alum recovered his second fumble, leading to another major and the subsequent game-winning two-point conversion.

This season, the five-year veteran recorded 32 tackles and four sacks.

Fans’ Choice of the Week!

2021 CFL Top Performers of the Week

2021 CFL Top Performers of the Month