TORONTO — Cameron Marshall, A.C. Leonard and D.J. Lalama were named the Shaw CFL Top Performers of the Week for Week 20 of the CFL’s 2019 season.

The three players were chosen by a panel of judges comprised of former CFL players Matt Dunigan and Duane Forde of TSN, as well as, Pierre Vercheval of RDS, who independently send their selections to the CFL head office. 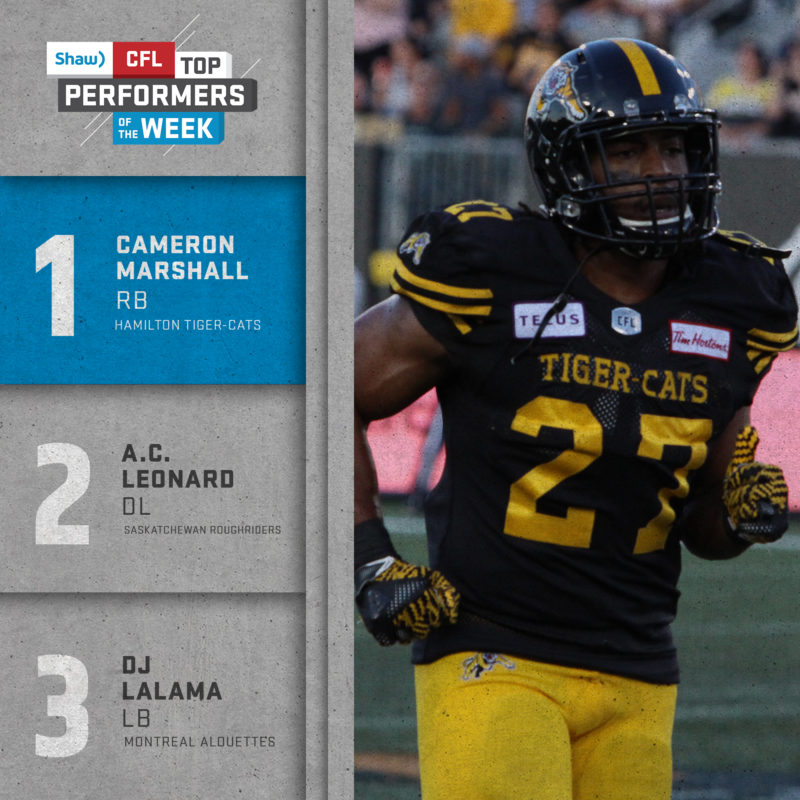 Cameron Marshall recorded 18 carries for a game-high 109 yards and two touchdowns, while adding 24 receiving yards, as Hamilton finished the regular season with a perfect 9-0 home record and increased its franchise-best single-season win total to 15.

The Arizona State alumnus tallied his first major with time winding down in the first quarter, running in the handoff from Hayden Moore for a five-yard score which knotted the game at six. The touchdown was Marshall’s first as a Tiger-Cat and his first since 2017.

Trailing 13-10 midway through the second quarter, the native of San Jose, Calif., took a delayed hand-off from 11 yards out and found the endzone for his first-career game with two rushing majors.

Marshall ended the day with six rushes of 10+ yards and the performance marked his third career-game with 100+ rushing yards. In four games this season, he has collected 307 rushing yards while averaging 6.1 yards per carry.

A.C. Leonard filled the stat sheet with a team-high six tackles, including three tackles for a loss, two sacks, a forced fumble and a fumble recovery, to lead the Saskatchewan defence in a 23-13 win. The victory earned the Roughriders the West Division crown and a bye into the Western Final.

In the second quarter, Leonard brought down Logan Kilgore for a 10-yard loss and the Eskimos would miss the ensuing field goal attempt. He then strip-sacked the Edmonton pivot in the third and recovered the loose ball. The Palatka, Fla., native’s two sacks alongside his three tackles for a loss, sent the Edmonton offence back 26 yards.

This season, the Tennessee State product has 44 defensive tackles and has established new career-highs in sacks (9) and forced fumbles (3).

D.J. Lalama had a career-outing as Montreal concluded the regular season with a 42-32 win over Ottawa.

The former Manitoba Bison notched a personal-best 11 tackles (10 defensive tackles and one special teams tackle) and recorded his first-career sack, tracking down Dominique Davis in the second quarter for an eight-yard loss.

The Winnipeg native has established a new career high with 25 defensive tackles this season, while adding nine special teams tackles.

Shaw Fans’ Choice of the Week!

What is the program?

The Shaw CFL Top Performers recognizes weekly and monthly player achievement in the CFL and is separate from our year end awards.

How does it work?

Each week and month during the CFL Regular Season a panel of CFL experts vote on the three top CFL Performers across the league in order. Those players are awarded points for each time they win.

Then we throw it out to you, the fans, to Retweet our Twitter posts announcing the winners. The player with the most Retweets will receive extra points and be crowned the Shaw Fan’s Choice of the Week. Remember, once the next Week begins voting ends; so get your RTs in fast!

What is the scoring system?

Here are the points for each award winner.