Play #138: Edmonton challenged believing there was defensive pass interference on their receiver (#87 Walker).

After review the replay official determined the defender’s play on the football did not meet criteria for such a call. Call stands as called, no penalty applied. #CFL

The scratches for game #22 of the #CFL season,

After review, the replay official determined the defender materially affected the ability of Toronto’s receiver to make a play on the football. Call stands. #CFL

Play #67: Hamilton challenged believing there was no yards on Toronto.

After review the replay official determined the Toronto coverage was inside the restricted area as Hamilton’s returner caught the football. No yards penalized on the play. #CFL

Play #26: Toronto challenged believing there was pass interference on their receiver.

The scratches for game #21 of the #CFL season,

Play #110: Toronto challenged that there was defensive pass interference on Hamilton DB (#25 Rolle). After review the replay official determined the defender did not materially affect the receivers ability to play the ball in the air. Play stands as called. #CFL

The scratches for game #19 of the #CFL season,

Play #73: Saskatchewan challenged the ruling of roughing the kicker. After review the replay official determined all contact was light and incidental. No roughing on the play. #CFL

The scratches for game #18 of the #CFL season,

The scratches for #CFL game #17 tonight in Ottawa,

Play #100: Ottawa challenged that there was defensive pass interference by BC (#20 Lokombo) on their REC (#81 Petermann).

After review the replay official determined the contact on OTT #81 restricted his ability to play the ball. Pass interference called. First down Ottawa.

Scratches for tonight’s #CFL game between BC and Ottawa:

An overview of the various types of no yards penalties.
July 3, 2019

Three players were fined after Week 2 action in the CFL, it was announced on Wednesday. 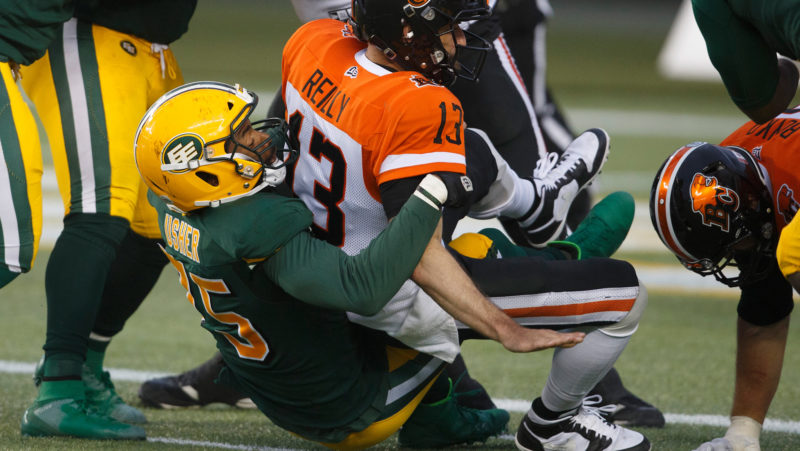 Edmonton Eskimos defensive lineman Nick Usher was fined for using the crown of his helmet to make contact with the head of BC Lions quarterback Mike Reilly.

Overview of adjustments to Roughing the Kicker interpretations that will further protect the kicker.
June 19, 2019

CFL commissioner Randy Ambrosie released the following statement on Sunday regarding the hit on Brandon Bridge.

TORONTO — CFL Commissioner Randy Ambrosie released the following statement on Sunday regarding the hit on Brandon Bridge during the Western Semi-Final:

“The high hit on Brandon Bridge late in the Western Semi-Final (play 137) was clearly a missed call. Watching this occur, and seeing via the ‘ref cam’ that the on-field referee’s view was blocked, my reaction is we need to look this off-season at allowing the Command Centre to make the call on plays such as this one, clear matters of player health and safety,” said Commissioner Randy Ambrosie. “We need to do more than admit an error. We need to search for a solution.”