REDBLACKS, Lions looking for the win column in Ottawa 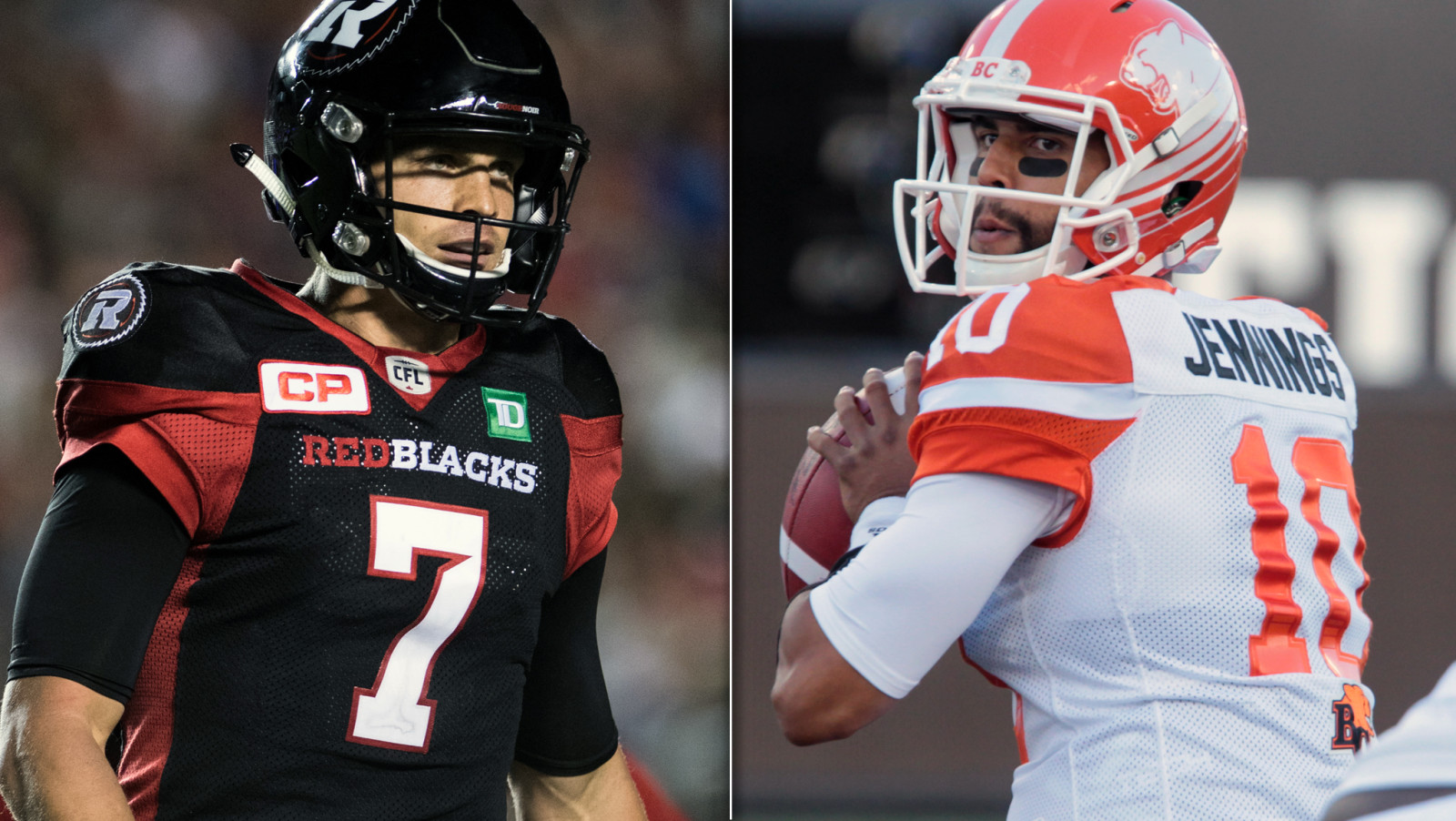 REDBLACKS, Lions looking for the win column in Ottawa

OTTAWA — Week 9 was not kind to the Ottawa REDBLACKS and BC Lions.

The REDBLACKS gave up 43 points to cellar-dwelling Montreal in an unexpected shellacking at TD Place. The Leos were shut down in every phase by the high-flying Stamps, dropping a 37-9 decision at BC Place in a critical battle for first place in the West Division.

Both squads will be looking to bounce back on Thursday night in a tantalizing Week 10 matchup in the nation’s capital.

The BC Lions plummeted back down to Earth in last week’s humbling loss to Calgary.

“There was just no emotion, no intensity,” said Leos head coach Wally Buono, whose team now sits three points behind the Stamps for first in the West. “It was not the same BC Lion team we’ve been lining up with for the last number of weeks.”

With their attention firmly set on Thursday’s date with the REDBLACKS, Buono’s team will have to be ready for Ottawa quarterback Trevor Harris, who will return from injury and make his first start since Week 5.

“It’s time to go out and play a team in the same boat that we are,” said Buono. “One thing he’s always been known for is getting the ball out of his hands very quickly. When quarterbacks are successful, they’re making quick reads and quick throws.”

After beginning the season as a defensive juggernaut, the Lions have evolved in recent weeks into a team that wins football games on offence; quarterback Jon Jennings has blossomed into — last week’s loss aside — a top-tier quarterback in the league, and the Lions lead the CFL in most rushing categories.

“We’re ready,” said Jennings on Wednesday. “Each team is pretty hungry, (s0) we’ve got to make sure we’re taking advantage of every opportunity — we’re looking forward to getting back on the right track.”

In a year which has seen rushing numbers down across league, BC has found a way to involve the ground game to relatively great effect. The Leos lead the CFL in rush yards (742) and touchdowns (9), and have three players — Jeremiah Johnson (309), Anthony Allen (194) and Jennings (175) — amongst the league’s top 10 in rushing.

“We stated from the beginning of the week, (we’ve got to be) making sure we take care of what we can, focus in on our jobs, minimize mistakes, and produce at a more efficient level this week,” said Jennings.

The Lions will have their hands full on the defensive side of the ball with the return of Harris under centre for a sputtering REDBLACKS offence.

One of the men on the BC line capable of disrupting Harris’s quick reads and accurate throws will be Mic’hael Brooks, an East Carolina product who will be in the lineup for the first time since Week 6.

“We need to have everybody else back to the level of intensity and speed we’re known for,” said Coach Buono. “Brooks will be fresh (and) he’s a disturber against the run and the pass.”

The Ottawa REDBLACKS will be hoping a change under centre can kickstart an offence which has been mediocre at best in recent weeks.

Harris, who was on pace for a MOP-type season before going down with an injury in Week 5, will return to the field for the capital club on Thursday.

“I feel good, don’t feel any nagging things from the injury,” Harris told OttawaREDBLACKS.com. “I’m very excited to come out and hopefully we can get a win for #RNation.”

In the four games — including the Saskatchewan game which he left injured in the first quarter — since Harris went down, the REDBLACKS are 1-3.

“We’re running the same offence, that’s not changing,” said Ottawa head coach Rick Campbell. “I know we can win with both Henry and Trevor — sometimes tough decisions have to be made.”

Facing the aggressive BC front seven, Harris is well aware that he’ll have to be at his best in his return to the field.

“They cover sideline to sideline, their linebackers run at a high level (and) their front four causes a lot of havoc,” said the Edinboro alum. “It’s no easy task to go against that defence, (but) we’re excited to see where we stack up against one of the great defences in the league.”

The REDBLACKS offensive line will have to be much-improved from last week’s loss to will have to try and neutralize the likes of Solomon Elimimian and Adam Bighill, some of the CFL’s top tacklers with 47 and 58 respectively.

The return of J’Michael Deane to Ottawa’s offensive line could shore up a line that looked porous against Montreal’s dogged front seven last week.

The REDBLACKS running game should have some extra juice this week in the form of Travon Van. The former Montana Grizzly ran for 133 yards in Ottawa’s first two games before going down with an injury. 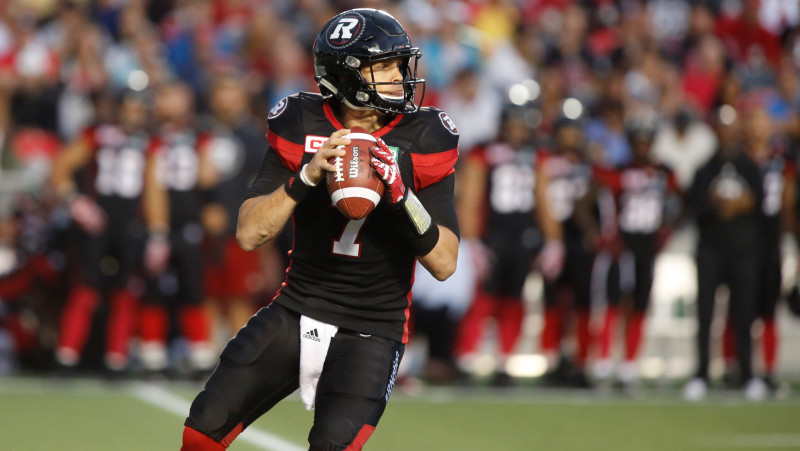 Trevor Harris returns for the REDBLACKS under centre this week in place of Henry Burris (CFL.ca)

1 – Home win in four tries for the REDBLACKS this season.

5.5 – Yards-per-carry for Ottawa’s Travon Van prior to his injury — second amongst league running backs.

27 – Sacks registered by the Lions, the second-most in the CFL.

Both BC and Ottawa are likely playoff teams, with some media outlets even pointing to the former as a sleeper Grey Cup favourite after the Leos’ hot start.

Both enter Thursday night’s game hungry not just for a win, but to send a message to the rest of the league; BC desperately needs to stay relevant in the West Division’s race for first, while Ottawa must win to stay in the driver’s seat atop the tight East Division.

The number of playmakers on either side of the ball is ridiculous; Trevor Harris and Jon Jennings alone can be offensive game breakers, while Ottawa D-lineman Zach Evans and the aforementioned Solomon Elimimian can turn a game on its head on the defensive side of the ball.

Kickoff is slated for 7:30 p.m. ET and can be seen live on TSN or followed online via CFL.ca Game Tracker.

What the fans are saying:

It’s the closest pick’em in recent weeks as CFL fans call it a toss-up between the Lions and REDBLACKS.

What the writers are saying: 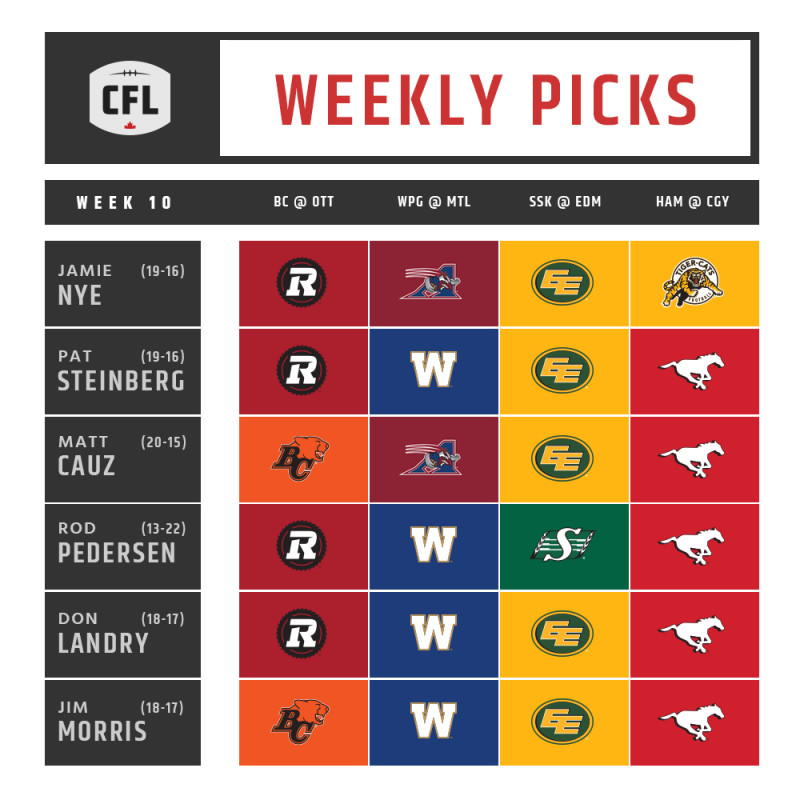