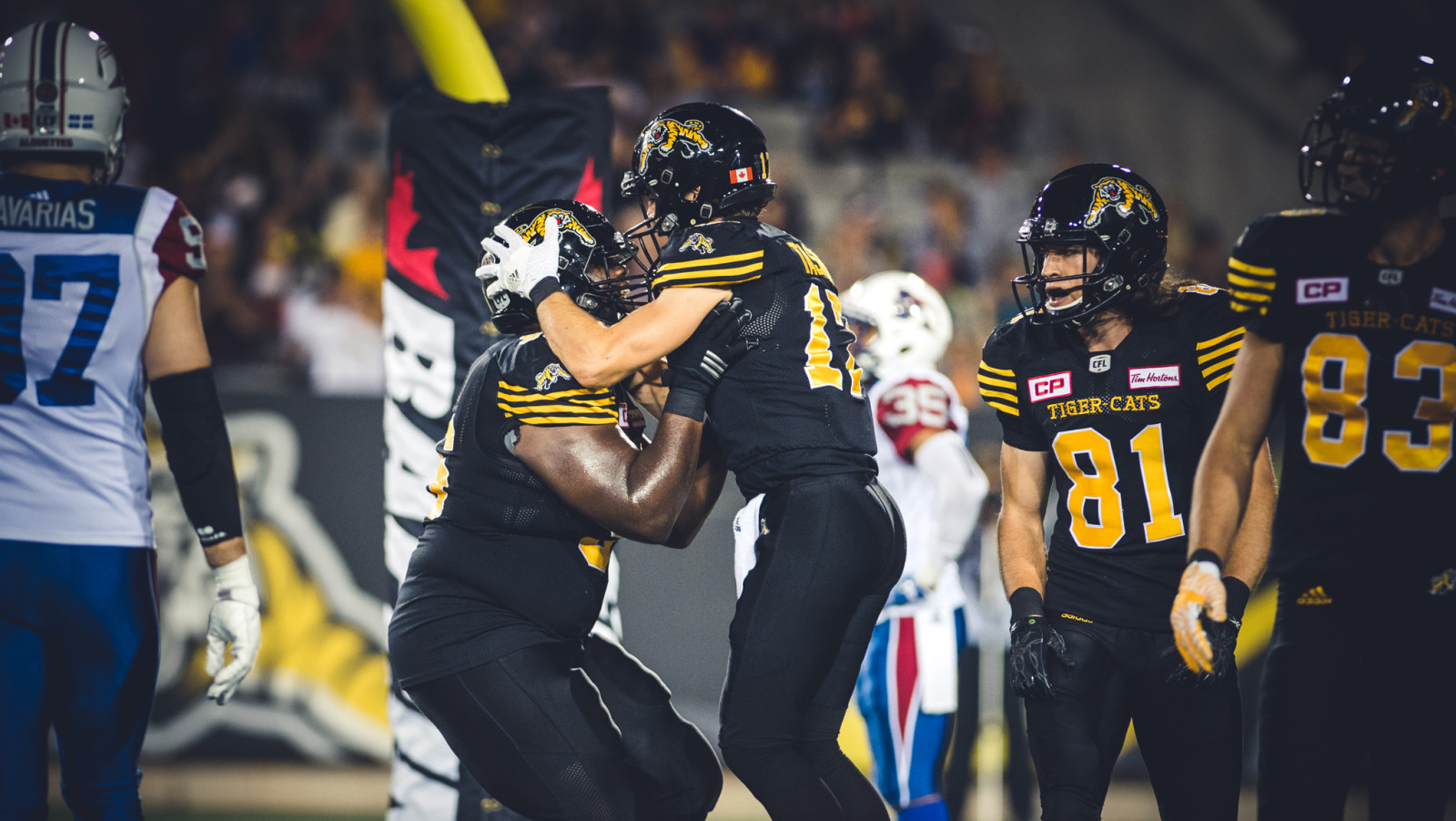 HAMILTON – Halfback Emanuel Davis led the way for the Hamilton defence – recording an interception along with two fumble recoveries – helping the Ticats outlast the Alouettes 20-17  in a defensive battle in Hamilton.

All eyes were on Alouettes QB Rakeem Cato in this one, after his altercation with teammates Duron Carter and Kenny Stafford in practice this week.

The Alouettes opened the game’s scoring with a single on a missed field goal from Anthony Fera after a lengthy drive to start the game.

Duron Carter did his best to endear himself to the Montreal faithful after a tumultuous week on the following Tiger-Cats drive, making a rare contribution on special teams. The star receiver raced around the edge untouched on a Hamilton punt, blocking Brett Maher’s kick, then scooping up the ball and fending off the punter en route to the game’s first touchdown.

The block added to a troubling trend for Hamilton, as it was the fourth blocked punt allowed by the Tiger-Cats in their last four games.

The Alouettes defence set the tone early on the road, taking down QB Zack Collaros twice in the opening frame and preventing the Ticats from finding any offensive rhythm. One early bright spot for Hamilton’s offence was rookie RB Ross Scheuerman, who showed some explosive speed out of the backfield in his first career CFL start.

The Tiger-Cats offence showed some life late in the second quarter, thanks in large part to a gutsy call by Head Coach Kent Austin. Facing a third-and-one near midfield, the Ticats elected to throw rather than try to grind out the first down, and Collaros found SB Chad Owens down the right sideline to give Hamilton a first-and-goal.

Collaros then found SB Luke Tasker up the middle on the following play for Hamilton’s first touchdown of the game. Maher’s extra point cut the Alouettes lead to 9-8.

Hamilton would get another chance on offence late in the half, after a pass from Montreal QB Rakeem Cato bounced through the hands of WR B.J. Cunningham and into those of DB Emanuel Davis, who recorded his fourth interception of the season.

Collaros marched his team down the field with big completions to WR Terence Toliver and Tasker, but the drive came to an abrupt halt after LB Bear Woods stretched out for an acrobatic interception in the red zone. Content with a one point lead, Cato and the Alouettes knelt out the clock, heading into the half with a slim 9-8 lead.

The Ticats elected to receive the kickoff to start the second half, and embarked on a lengthy drive which ended in a Maher field goal, giving Hamilton their first lead of the game.

After the ensuing kickoff, Emanuel Davis came up big again on the first play of the Alouettes’ drive, recovering a Nik Lewis fumble to give the Ticats another chance in the Montreal half. Unfortunately for Hamilton, Collaros and the offence were stopped once again, and settled for another Maher field goal to extend their lead to 14-9.

Cato and the Alouettes offence seemed to find a groove following the field goal, stringing together a few positive plays before the turnover bug bit once again. This time it was Cunningham who couldn’t hold onto the ball, and once again Emanuel Davis was Johnny on the spot, recording his third turnover of the game.

The Tiger-Cats were forced to punt it away and the Alouettes scored their first field goal on the following drive, narrowing Hamilton’s lead to just two. 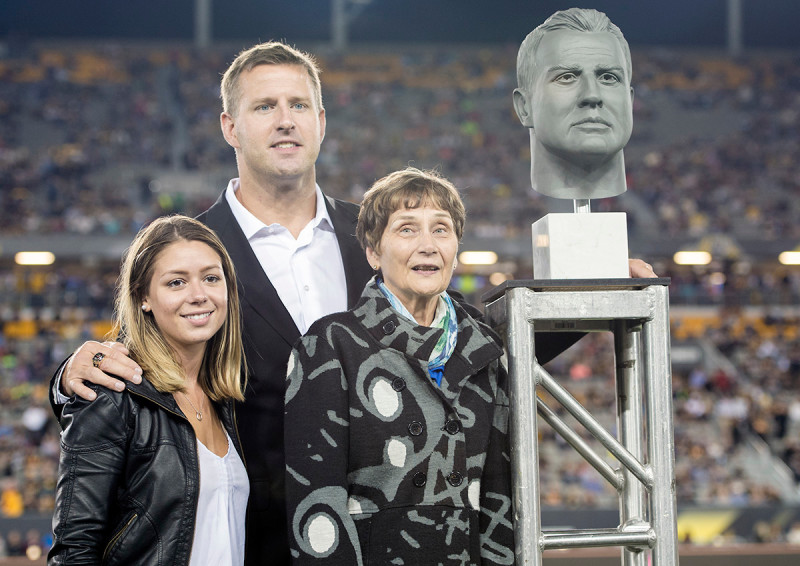 Doug Brown is inducted into the Canadian Football Hall of Fame at halftime (Adam Gagnon/CFL.ca)

But Hamilton responded with a 51-yard field goal from Maher, re-establishing their five point lead with less than ten minutes to go in the game.

After being pinned deep in their own red zone a few drives, Brett Maher conceded the safety on a punt attempt, bringing the Alouettes within a field goal.

The Alouettes got a boost on the following punt, as SB Sam Giguere waved off first-string returner Stefan Logan and took the ball himself, returning the kick 46 yards and giving Montreal great field position. Although Cato and the Als offence weren’t able to get much going on the ensuing drive, Giguere’s return ensured the Alouettes were close enough for a field goal attempt, and Fera drilled it between the uprights to tie the game at 17.

Collaros and the Ticats received the ball just before the three minute warning, with the possibility of a game-ending score within their grasp. After a couple of Hamilton first downs, Collaros found SB Andy Fantuz for a 31-yard gain to the Montreal 20.

All that was left to do for the Tiger-Cats was to bleed the clock, and Collaros leaned on Scheuerman to do just that. Brett Maher kicked the 10-yard field goal as time expired, as the Ticats secured the 20-17 home victory.

Scheuerman led all players with a total of 119 yards from scrimmage in his first career CFL start, while Collaros threw for 291 yards and a touchdown to go along with two interceptions.

Next week the Tiger-Cats will head West to Saskatchewan, where they’re set to face the reeling Roughriders, who have managed just one win through the first 12 weeks of the season.

The Alouettes will head into the bye week on a four-game losing streak, where they’ll look to iron out some kinks in their game if they have any hope for a playoff berth in 2016.