Fajardo guides Riders back in victory over Ticats 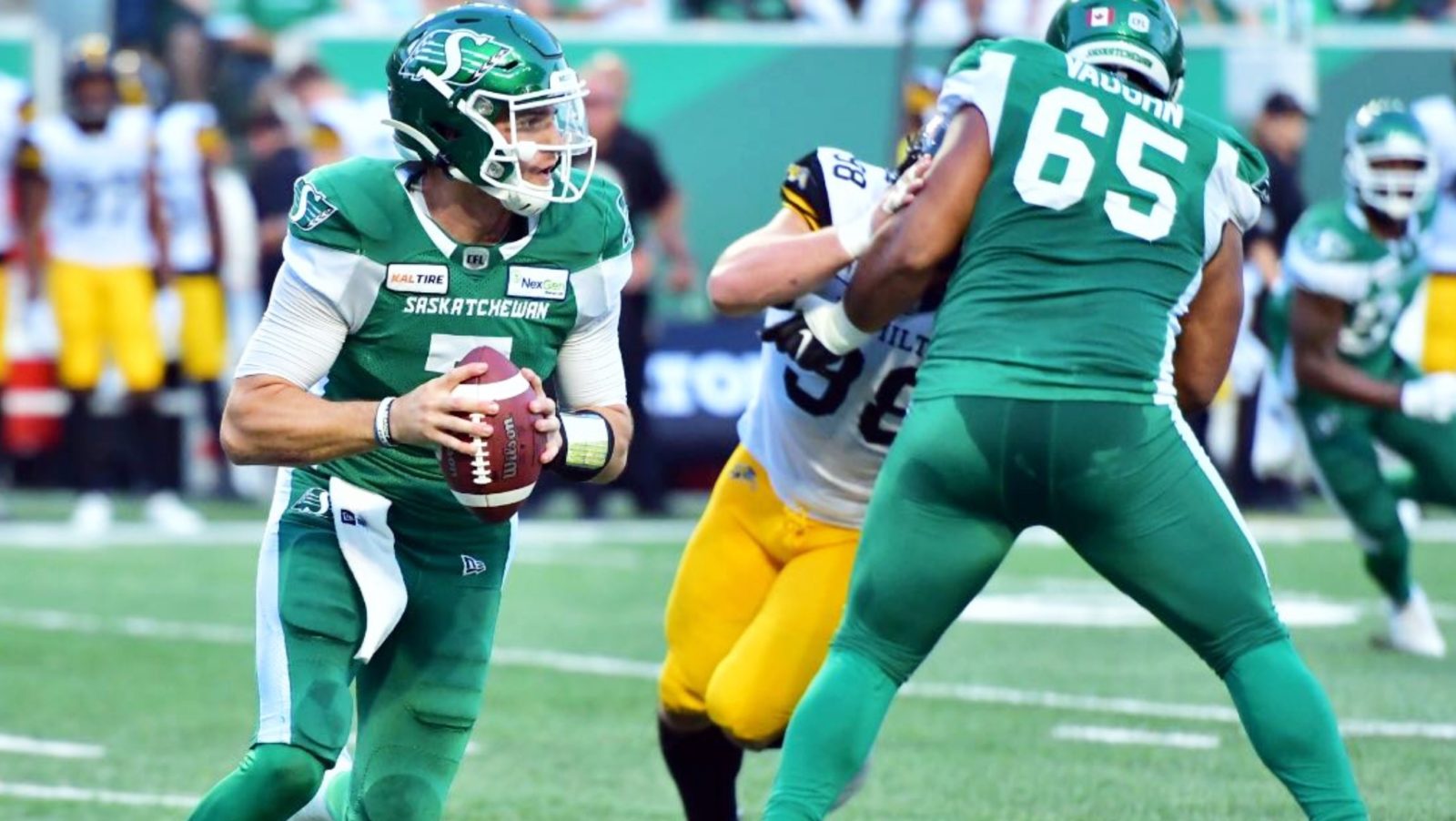 Fajardo guides Riders back in victory over Ticats

REGINA – Cody Fajardo proved to be the quarterback with the upper hand in the final moments of Thursday night’s game as the Saskatchewan Roughriders topped Dane Evans and the Hamilton Tiger-Cats 24-19 at Mosaic Stadium.

With the win, Saskatchewan improves to 4-3 on the season while the Ticats lose just their second game of the year. Hamilton drops to a 5-2 record, however, they still on top of the East Division.

Fajardo passed for 313 yards against the Hamilton defence, completing 25 of his 31 passing attempts on the night. The Riders’ signal-caller also topped his team’s rushing stats, dashing his way for 56 yards and a touchdown.

Both the Saskatchewan Roughriders and Hamilton Tiger-Cats entered Thursday’s tilt having undergone significant changes at the quarterback position.

The day following the trade of Zach Collaros to the Toronto Argonauts, quarterback Fajardo has been handed the reigns to the Roughriders offence for the foreseeable future. As for the Tiger-Cats, the news of Jeremiah Masoli missing the remainder of the season after suffering a knee injury last week against the Blue Bombers put former Tulane standout Dane Evans behind centre for the Tabbies. The start marked just his second career start.

Fajardo and the Riders appeared to have the upper hand in the early-going of the game, having passed for 115 yards in the quarter. A touchdown by William Powell would have Saskatchewan ahead after the opening 15 minutes, leading the Ticats 7-3.

Aside from Powell’s first-quarter touchdown, special teams would be responsible for the majority of the scoring in the first half. Gabriel Ferraro notched a 30-yarder, only to then tack on 10 more yards to his second make of the half, further extending the Riders lead.

Hamilton’s Lirim Hajrullahu booted a pair of field goals to keep the Black and Gold with a fighting chance heading into the locker rooms.

In the first half, Fajardo passed for over 200 yards as the Riders doubled up on the Ticats 13-6.

Shaquelle Evans put forth a game’s worth of stats in the first 30 minutes as well, hauling in six receptions for 137 yards receiving.

As for Hamilton, Evans and the offence struggled to piece together a drive that saw them get deep into the Riders’ end of the field. The Ticats quarterback only passed for 81 yards and the offence was kept under 20 yards on the ground.

In the second half, another Hajrullahu field goal cut into the deficit Hamilton was facing with their offensive woes continuing.

It wasn’t until later in the quarter where Tommy Condell, Hamilton’s offensive coordinator, started moving around his most seasoned receiver in Luke Tasker throughout the offensive formation, eventually leading to a touchdown connection between Evans and Anthony Coombs, who cradled his toes tightly along the sideline to uphold the major. The touchdown pushed the Tabbies ahead for their first lead of the game.

Despite a slow start in the first half, Evans ended up flipping the script and completing the game with 196 yards through the air, completing 19 of his 29 throws. Like Fajardo, Evans would also lead his team in rushing yards (34) for the night.

The offence built off the success of their previous drive, marching down the field before being halted by the Saskatchewan defence. Hajrullahu would end up tallying his fourth successful field goal of the game to give Hamilton a six-point cushion.

A field goal by Ferraro a few minutes later narrowed the Hamilton lead to three, making for an exciting final few minutes of the fourth quarter.

Using the receiving-tandem of Evans and Kyran Moore, Fajardo marched the Riders quickly into scoring position with less than a minute left in the game.

Fajardo dashed his way to the far pylon, diving in for the go-ahead touchdown with 24 seconds remaining in the fourth quarter, but not enough for Evans to work with as time would expire.

Up next for the Riders, they’ll pay the soaring Alouettes a visit in Montreal on Friday of Week 9. Hamilton will be playing host to the struggling BC Lions, wrapping up the week’s schedule on Saturday at Tim Hortons Field as they hope to maintain their lead over the rest in the East Division.