OTTAWA — The Ottawa REDBLACKS made a splash on Thursday with the signing of 20̶0̶-lb. DL Belly Buster ahead of Saturday’s divisional clash with the Hamilton Tiger-Cats at TD Place.

The Ottawa, Ont. native spent four years south of the border at Ben & Jerry’s State, where he compiled 17 tackles, three sacks and a conference-record 37 cavities forced.

“I like to bring a hard-hitting crunch, then a satisfying cool in front of the home fans,” said Buster, a 24 year-old in his first pro season. “It doesn’t matter what position I’m at — butterscotch, chocolate, vanilla or mint — I’m going to ball.” 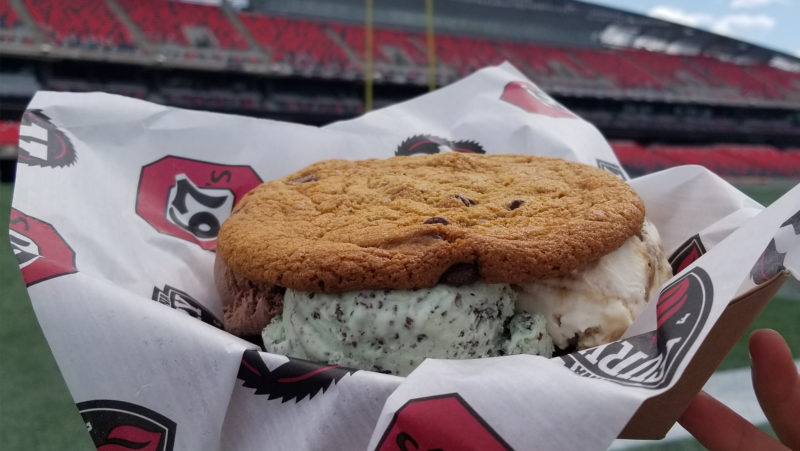 “I’m happy to be here, and ready to get started with #RNation,” said Buster in his introductory press conference (OttawaREDBLACKS.com photo)

Known to have an eye for Canadian linemen, the REDBLACKS pounced on the former BJSU Dairy Warriors star when he became available.

“We couldn’t pass up adding a player of his size and versatility,” said Jacob Kelly, the REDBLACKS’ digital coordinator. “He’s someone who we think could quickly become a fan favourite as soon as fans get a chance to experience all he has to offer.”

Buster and the rest of the REDBLACKS face the Hamilton Tiger-Cats in a key East Division clash this Saturday at 4 p.m.; tickets are available here.

The two-pound Belly Buster Ice Cream Sandwich will be available for $12 on both the north and south side concourses at this Saturday’s REDBLACKS home game.