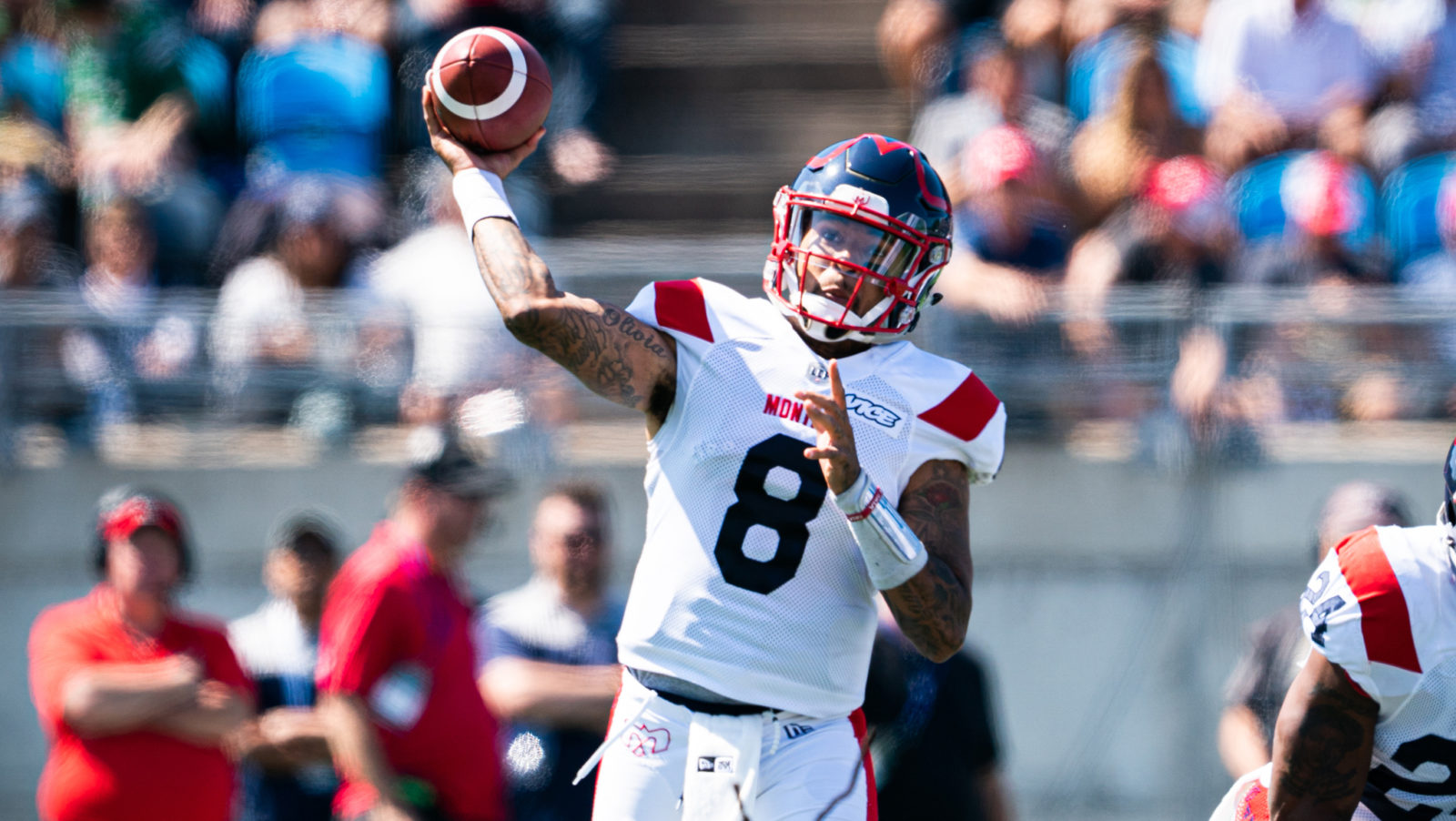 MONCTON — A pair of passing scores by Vernon Adams Jr. made the difference, as the Montreal Alouettes bested the Toronto Argonauts 28-22 on Sunday in Moncton, N.B.

Adams Jr. continued his solid play from a week prior, throwing for over 330 yards and two touchdowns.

Jeremiah Johnson had 54 yards and a touchdown on the ground.

McLeod Bethel-Thompson went 36 for 47 with 464 yards and two touchdowns in the loss. Rodney Smith had a season-high 12 catches. S.J. Green also took sole possession of 23rd all-time in catches in CFL history.

After both teams went without scores on their opening possessions, it would be Toronto that would open the scoring in the first quarter. Bethel-Thompson would begin to get in a rhythm by getting the ball out quick to his receivers on short routes. He’d complete all five of his passes on the drive, but after a sack by Greg Reid, the Argos would be forced to kick a field goal. Tyler Crapigna would calmly knock a 39-yarder through the uprights to give Toronto an early 3-0 advantage.

Adams Jr. would start to move his team down the field. He’d complete passes to Jake Wieneke and Bray, but his third pass of the drive intended for Bray down the right sideline would be undercut and picked off by Kevin Fogg. The field goal would prove to be the lone score, as the double blue couldn’t convert the turnover into points.

Toronto would double its lead to open the second quarter. Bethel-Thompson would connect three times with Smith. That would set Crapigna up with a 44-yard kick, which he would hit after a friendly bounce off the left goal post.

Following another two-and-out by Montreal, the Argos’ offence would go back to work. Bethel-Thompson would complete three passes — all to different receivers, with an 18-yard toss to Smith being the biggest gain. After being forced into a third-down scenario, Toronto would go for it from just 6 yards out. After being forced from the pocket, Bethel-Thompson would find a wide-open Jimmy Ralph by the goal line. That score would mark the first of Ralph’s career, and after a Crapigna point-after, Toronto held a 13-0 lead.

At one point in the first half, Bethel-Thompson had 11 straight completions. That streak was snapped after a deep ball intended for Derel Walker was nearly picked off by Reid in the end zone. The Argos’ pivot would leave the pocket and attempt to hurdle linebacker Henoc Muamba to get a first down, but he’d take a lick from an incoming Tommie Campbell — the effort would be for naught, however, as a holding penalty would negate the yardage.

A 17-yard catch-and-run by Burks would put the Argos in position for another three points. Crapigna would stick his third field goal of the half, hitting from 46 yards and getting another fortunate bounce off the right goal post.

Montreal would find life with just over two minutes to go in the second quarter, with Adams keeping a play alive to find Bray over the middle for a gain of 31 before a deep ball down the right sideline to Posey would come up just short of hitting pay dirt. Two plays later, Adams would punch the ball in from the 1-yard line on a sneak play to get the Als on the board. A failed two-point conversion would make it 16-6 heading into halftime.

Toronto would concede great starting field position to open the second half, as the kick-off would bounce out of bounds, giving Montreal possession at the 45. The first play of the third frame would see points go up on the board, as Adams would hit Lewis with a bomb down the left sideline that would go for a 65-yard touchdown. Boris Bede would hit the extra point to make it a 16-14 game.

After that score, most of the quarter served as a position battle, with Montreal hemming Toronto deep in their own territory. But Montreal would take their first lead of the game with just over 2:30 to go in the third.

After completing passes to Posey and Wieneke for 14 and 15 yards, respectively, a triple reverse play would give Adams the time to unleash another strike to the back of the end zone to find Bray, who’d lay out for the 34-yard touchdown reception. It would be a 20-16 advantage for the Als following the Bede point after.

However, the Argonauts would have an immediate answer. Bethel-Thompson would cap off a three-play, 73-yard drive with a 38-yard completion to Walker down the right side. The receiver fought off Campbell and tip-toed along the sideline to get in for the score. Crapigna would miss the extra point attempt, but the Argos still held a two-point advantage.

In the see-saw matchup, Montreal would jump back out in front. Their initial drive looked to be finished, but a roughing the kicker penalty would give the Als a second life. They’d take full advantage, as Adams and Posey would connect twice for a total net gain of 21 yards. Johnson would then take a handoff, bounce it to the left side, and rumble 25 yards into the house, burning past several Argos defenders in the process. Bede would hit yet another point after to give the Als a six-point advantage with a little over 10 minutes remaining in the game.

Bethel-Thompson looked to lead his team downfield in search of the go-ahead score, but after being flushed from the pocket, his pass over the middle was picked off by Ryan Carter. However, a review from the command centre would determine that there was a roughing the passer call on the play, giving Toronto possession back. However, they’d fail to convert on fourth down in Montreal’s half of the field and turn the ball over on downs.

On the drive, Green passed Jock Climie for 23rd all-time in catches with a 19-yard reception.

The Alouettes would kill out the majority of the clock, but they’d leave enough time on the clock to give Toronto one last shot. Bethel-Thompson would get the ball inside the 5-yard line with 0.3 seconds on the clock, but his throw to the end zone for Armanti Edwards would fall incomplete, giving Montreal the 28-22 victory.

With the win, the Alouettes move to 5-4 on the season. They’ll have a bye during Mark’s Labour Day Weekend. As for the Argos, they head into their annual clash with the Hamilton Tiger-Cats on Sept. 2 looking to avoid their third consecutive loss.