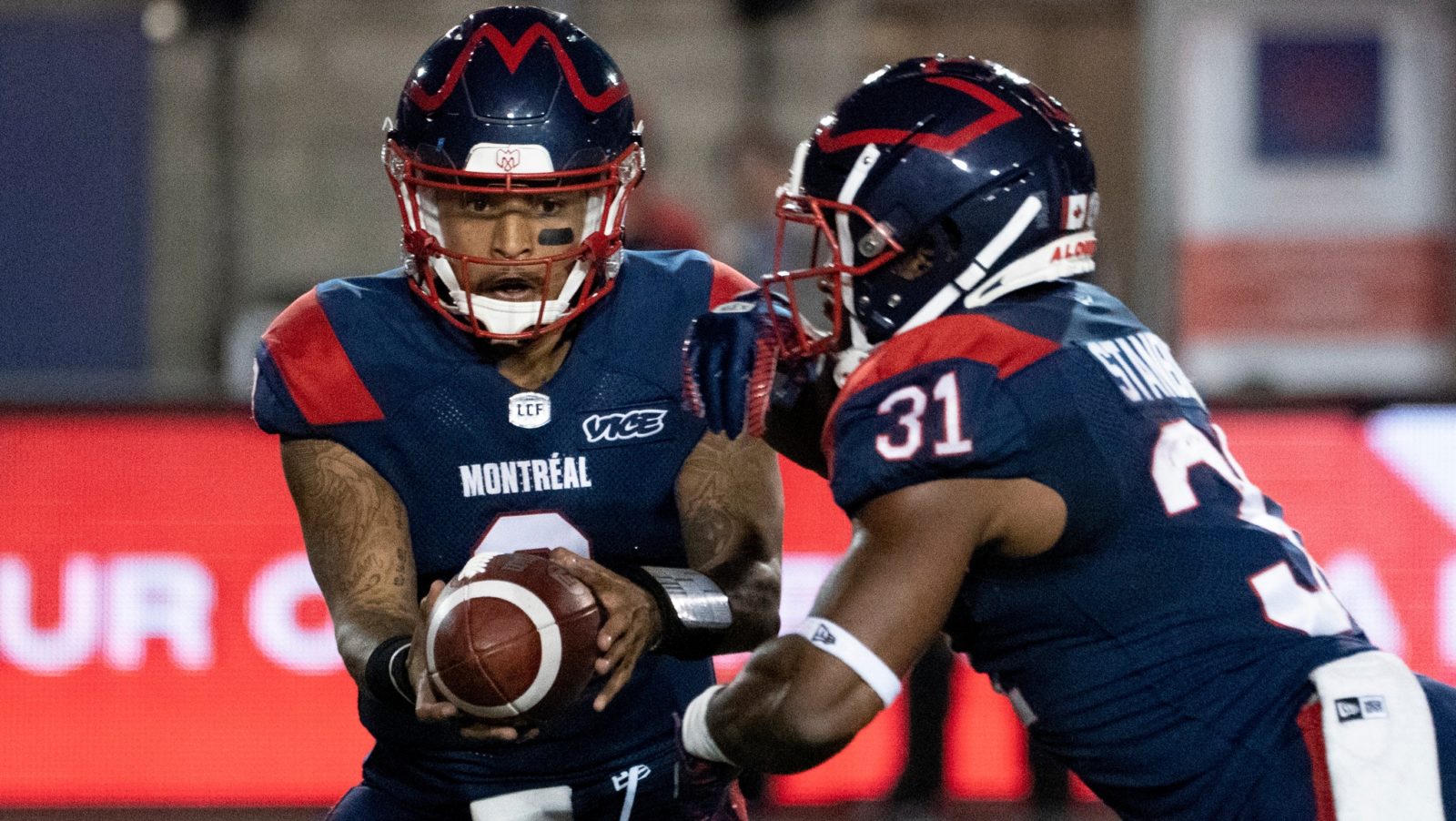 MONTREAL — Vernon Adams Jr. threw a touchdown and ran for two more as the Montreal Alouettes claimed a 21-16 home victory against the BC Lions on Friday night. The Als now hold a 6-4 record after winning three straight.

A pair of rushing touchdowns from Adams gave the Als an early two-score lead, but the Lions responded before half-time with a 40-yard touchdown pass from Mike Reilly to Bryan Burnham. A 19-yard field goal from Sergio Castillo brought the Lions closer in the third quarter after BC’s defence slowed the Als down, and Castillo made it a one-point game early in the fourth quarter with a 26-yard field goal.

Adams led a touchdown drive in the fourth quarter to put Montreal up by eight points, but the Lions added another field goal late in the quarter to make it a five-point game. The Lions got the ball back on offence with under thirty seconds to go after BC’s defence stopped Montreal on third-and-one, but the Als were able to hold on for the win after a clutch sack from John Bowman.

Adams threw for 232 yards while completing 18 of 25 passes and now leads the league with ten rushing touchdowns on the season. William Stanback gained 133 total yards on 15 carries and two catches.

Reilly completed 20 of 29 passes for 230 yards, and Burnham had another standout performance for BC by catching all eight of his targets for 129 yards.

Brandon Rutley gained a first down on the first play of the game with a solid 12-yard run that gave BC a good start, but Bowman stiffed the Lions’ opening drive by taking Reilly down for his third sack of the season.

Stanback broke free for a 36-yard catch-and-run on Montreal’s first drive before following it up with an 11-yard gain on the ground, but the Alouettes walked away without a point after a holding penalty on a missed field goal attempt negated a single and forced a punt.

The Als opened up the scoring in the second quarter on a one-yard quarterback sneak touchdown from Adams. Stanback set up the score up by carrying the ball down to the goal line on an eight-yard run after DeVier Posey moved the ball into scoring range with a 24-yard catch. Bede kicked the convert to give the Als a 7-0 lead.

Montreal’s defence forced another punt on the following drive, and a 21-yard run from Stanback helped set up a deep pass to Eugene Lewis in the end zone. But Lions defensive back Branden Dozier made early contact on Lewis and drew a pass interference penalty, placing the ball at the one-yard line and setting up Adams’ second rushing score of the game. Bede added the extra point to put Montreal up 14-0 with just over five minutes to play in the half.

Reilly and the Lions looked to respond before half-time, and that mission was accomplished when Reilly connected with Burnham for a 40-yard touchdown. The Lions’ top receiver gained 22 yards after the catch and broke multiple tackles on his way to the end zone for the score. Castillo kicked the extra point to cut Montreal’s lead in half.

The Als made another push on offence before the end of the half, but Adams was picked off by Garry Peters in the end zone while trying to complete a deep pass in the final seconds.

The Lions cut into the Als’ lead again after a long drive in the third quarter led to a 19-yard field goal from Castillo. Rutley carried the ball four times for 29 tough yards on the drive to help set up the kick.

BC’s defence stepped up in the third quarter and prevented the Als from adding to their lead, and the team took advantage by adding a 26-yard field goal that made it a one-point game with just under thirteen minutes to go in the game.

The Als responded on their next possession, as Adams orchestrated a touchdown drive that saw the quarterback gain four first downs through the air before finishing the drive off with a four-yard touchdown pass to Quan Bray. Bede added the extra point to put Montreal up 21-13.

Castillo kicked a 47-yard field goal to make it a five-point game with just under three minutes remaining, and the Lions got the ball back on offence in the game’s final thirty seconds. But the Als were able to hold on for the win after Bowman added his fourth sack of the season.

Week 14 will see the BC Lions host the Ottawa REDBLACKS next Friday, while the Montreal Alouettes will face the Saskatchewan Roughriders on the road next Saturday.