Riders’ quest for first continues with win over Lions 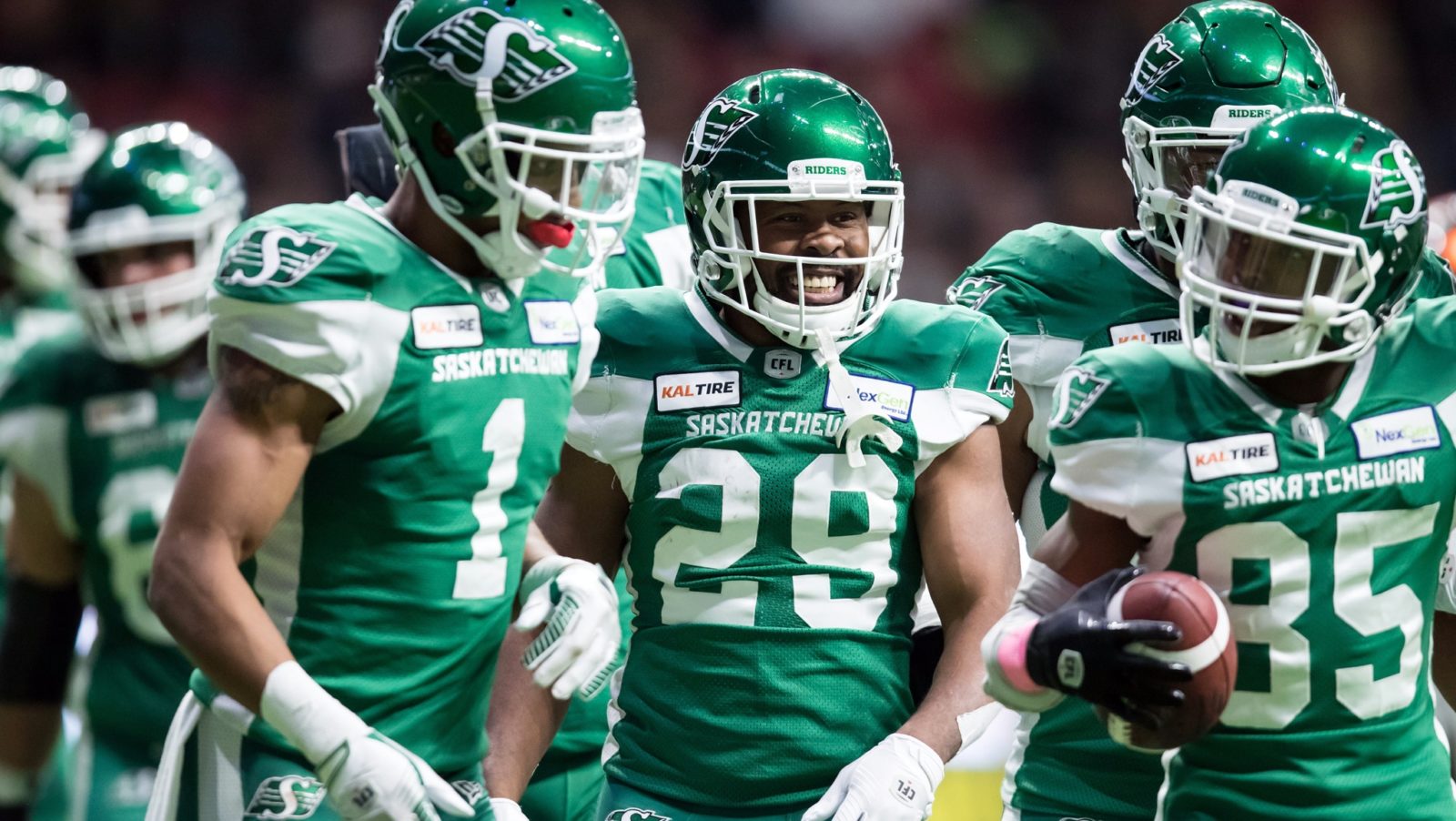 Riders’ quest for first continues with win over Lions

Saskatchewan Roughriders' William Powell (29), Shaq Evans (1) and Kyran Moore (85) celebrate Powell's touchdown against the B.C. Lions during the first half of a CFL football game in Vancouver, on Friday October 18, 2019. (The Canadian Press)

VANCOUVER — The Saskatchewan Roughriders walked out of BC Place on Friday night with their 11th win of the season, defeating the BC Lions 27-19.

The win puts the Riders (11-5) atop the West Division for now, with the division looking to be going right down to the wire when Week 21 rolls around.

For BC (5-12), this week brought the opportunity for Danny O’Brien to step in for his first career start since entering the league back in 2014 with the Ottawa REDBLACKS.

Saskatchewan’s phenom quarterback Cody Fajardo completed 21 of his 26 passing attempts on the night, putting 224 yards through the air and a touchdown.

Defensively, the Roughriders put up the Green Wall on Friday night: hauling down Lions’ quarterbacks six times, forcing two fumbles, and capping the victory off with an interception.

In the first half, it initially got underway as a game for the kickers.

Sergio Castillo took care of breaking the ice off the scoreboard, putting the Lions ahead with a 50-yard field goal in the closing minutes of the opening quarter.

While the offence for either team continued to get their pistons churning, Brett Lauther evened the scoring up quickly in the second period, notching a 52-yard field goal.

Castillo responded with a 43 and 30-yarder, reclaiming the lead for BC.

Fajardo and the Riders’ offence finally were able to piece together a drive, capping it off with a 1-yard touchdown by William Powell. A missed convert would leave the game tied at 9-9.

On the ensuing drive for the Lions, Danny O’Brien got caught behind the line by Mike Edem, who happened to knock the ball loose as well. By the time the ball was finally recovered it had travelled 27 yards towards the Riders endzone as Saskatchewan forced the turnover, ultimately resulting in Lauther’s second field goal of the game.

The Roughriders took a 12-9 lead into the dressing room for halftime.

In the third quarter, Saskatchewan started on offence from their 25-yard line. From there, they marched downfield to score a major in nine plays, a play in which Fajardo called a late audible to find Kyran Moore over the middle of the endzone for the score.

With just over four minutes remaining in the third quarter, Grant Kraemer came in for relief of Danny O’Brien.

Kraemer wouldn’t fare much better, however. The former Drake University pivot was sacked twice before going down with a lower-body injury.

As the fourth quarter got underway, Lauther would tack on to Saskatchewan’s lead, hitting his third (28 yards) and fourth (22 yards) field goals of the night.

O’Brien returned to the Lions huddle with nine minutes remaining in the fourth quarter.

Castillo added another field goal to his stat line before the night was done. Bryan Burnham also not only added to his season-long highlight reel but also tacked on a receiving touchdown — his tenth of the season.

Hoping for a spark of a comeback, the Lions regained possession with less than a minute to play. With time working against them, O’Brien had no other choice but to heave the ball deep downfield, ending up in the hands of Saskatchewan’s Elie Bouka.

As the Roughriders push to finish first in the West Division, they’ll make a trip to Edmonton for the conclusion to Week 20’s schedule. As for the Lions, they’ll spend Week 20 on their final bye week of the season before wrapping up their season in Week 21 against the Calgary Stampeders.