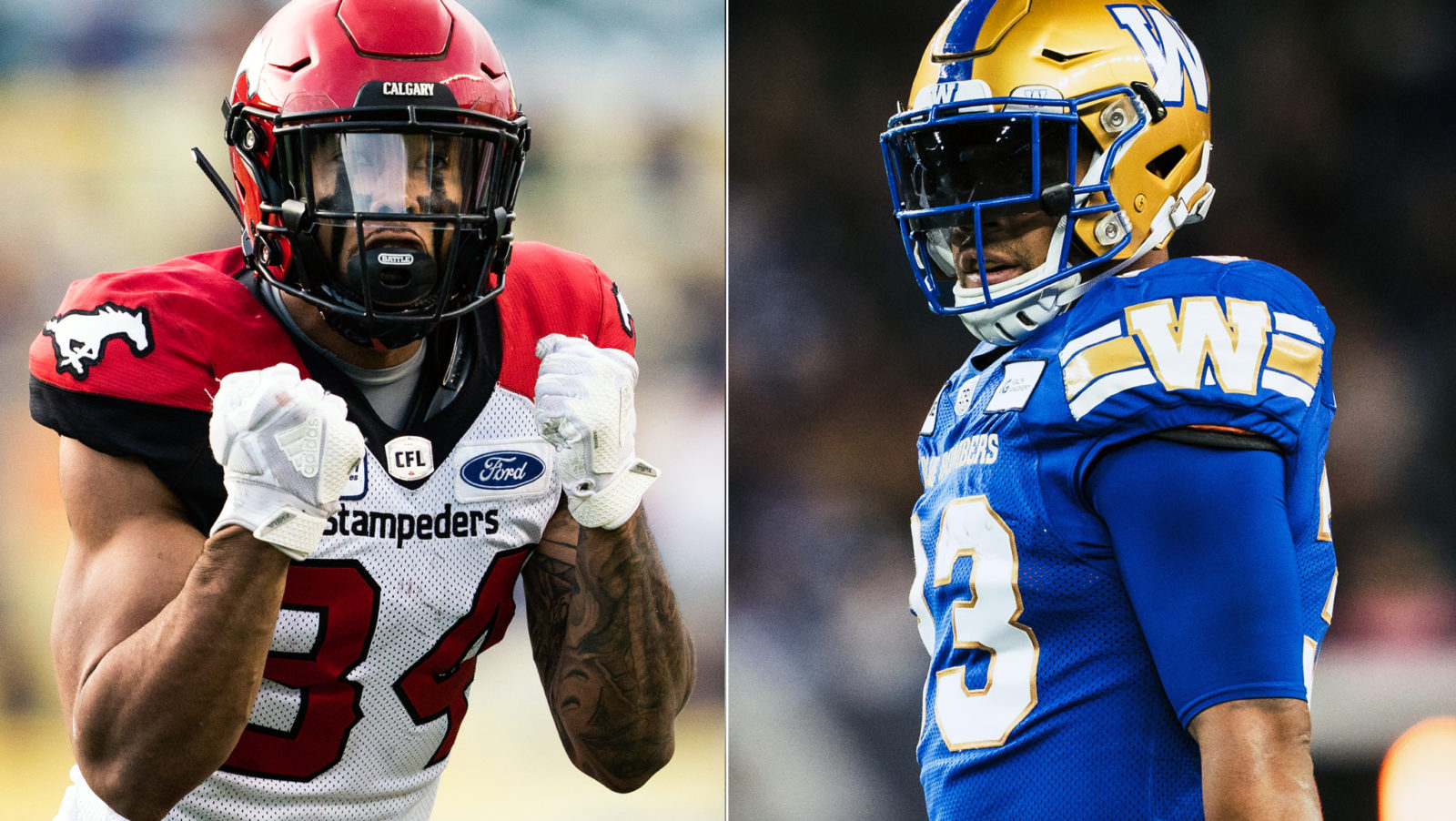 CALGARY — There will be no need for introductions for the Calgary Stampeders and Winnipeg Blue Bombers.

Nearly a year after meeting in the division final, the two western rivals will clash for the third time in 23 days on Sunday, as Calgary’s McMahon Stadium hosts a highly-anticipated Western Semi-Final.

The Bombers won the season series 2-1, but all three games were decided by four points or fewer, featuring a total of nine lead changes. In the end, the combined margin of victory added up to just seven points.

“Two great teams,” said defensive back Tre Roberson, who led the Stamps with seven interceptions and two touchdowns in his sophomore season. “They haven’t won a Grey Cup in a while so they’re fighting and trying to bring one for their organization. You’ve got two teams fighting with a lot of talent. You’re going to get tough games and we’re expecting that on Sunday.”

“It’s electrifying,” Bombers linebacker Adam Bighill added. “You can feel it building in October, you can feel the pressure and the importance mounting on every single game, and you get to this point now . . . I love putting it on the line. Those types of situations where it’s all riding on this play. That’s what I live for.”

With appearances in seven straight Western Finals, the Stampeders have set the standard for success in the Canadian Football League. But things haven’t come easy for the defending Grey Cup Champions in 2019, posting their lowest regular season win total (12 games) since 2012.

Not only that, but the majority of Calgary’s games this season have gone down to the wire. They’ve played in a record-tying 14 games decided by seven points or fewer, including a streak of seven in a row which remains intact entering the playoffs.

“I think the CFL’s as balanced as it’s ever been,” said Calgary head coach Dave Dickenson. “I think all six teams that are in the playoffs right now really believe they can win the Grey Cup, and I’m not sure you can say that in a lot of years. We’re not in the mode where we’re overconfident, which can be a good thing in my opinion.”

The Stampeders are led by reigning Most Outstanding Player and quarterback Bo Levi Mitchell. The 29-year-old missed seven games with a strained pectoral muscle, but has since played some of the best football of his career, averaging 326 yards per game since returning on Labour Day.

With a CFL-worst 71.3 rush yards per game — and a matchup against the league’s top run defence — it’s no secret the Stampeder offence will air it out on Sunday.

“I think since he’s come back from his injury, he’s played better than he’s ever played in his CFL career,” said Dickenson. “We haven’t had that running game that we’ve leaned on many, many years. He’s taken over and won a lot of football games for us.

Mitchell has done some of his best work against Winnipeg of late, compiling a stellar 14-1 touchdown to interception ratio and 115.0 quarterback rating in their last five meetings dating back to 2018. Knowing his tendencies, the Bombers will try to find ways to make him uncomfortable.

“He is human, he is fallible,” said Bighill, who made 61 tackles this season. “He is a great quarterback, he does a lot of great things but there have been plenty of times we’ve been able to rattle him and make him see things he’s uncomfortable with. If you watch the film of when we’ve played him over the years, you’ll see the things we’ve been able to do.”

Mitchell will be without one of his top targets in Eric Rogers, who will miss a second straight game. The veteran receiver is a force in the red zone, and his three touchdown performance burned the Bombers in the Western Final last November. Rookie receiver Aaron Peck, who replaced Rogers last week, also can’t play due to injury.

However, the Stampeders will have reinforcements. Fourteen months after a devastating knee injury, Kamar Jorden will return to the Calgary lineup on Sunday. The 30-year-old had 944 yards and six touchdowns in 10 games before being injured on Labour Day in 2018.

“To be back on the field with the team, to be practising, to be in the huddle cracking jokes – that was the stuff you miss,” said Jorden, who began running routes two months ago. “It’s been a long year, a long rehab, long recovery.

“I told Bo, I told Dave that if I’m playing, I’m playing. Don’t expect anything less of me. I expect to make the same plays and to be the same dynamic guy I am.”

The Stampeders will also get help on defence, as Roberson and safety Royce Metchie return to the lineup along with linebacker Cory Greenwood. Defensive end Cordarro Law, who registered 10 sacks, will not be able to suit up.

For Calgary’s secondary, stopping Zach Collaros has become a difficult task. The Bombers traded for the veteran quarterback at the deadline following a season ending injury to Matt Nichols. Despite playing in his first game since Week 1, Collaros was the difference in a 29-28 win over the Stampeders in Week 20, setting up a game-winning field goal as time expired.

The turning point came in the fourth quarter, when Collaros avoided pressure on second-and-seven, rolled back to his right and threw a touchdown pass to Darvin Adams to pull the Bombers within two.

“It was second and long so it was time for us to get off the field and he made a great play,” said Roberson. “Great play by him.”

“As soon as Zach came in the huddle there was instant respect,” said Bombers running back Andrew Harris. “You know his history and how long he’s played the game but you can tell there’s a lot of experience and a lot of confidence and the trust was gained instantly for me.”

Collaros has a personal three-game winning streak against Calgary, dating back to 2018 when he won both of his starts as a member of the Saskatchewan Roughriders. The Bombers’ pivot knows extending his streak to four won’t come easy.

“They’re a very disciplined group, they don’t make a lot of mistakes,” said Collaros. “They do a good job of making you work for first downs and work for points. There are some new faces, but they’ve done a really good job and you can see them getting better and better as the season has gone on.”

Chris Streveler, the Bombers’ short-yardage quarterback and primary backup, is questionable to play. His injury opened the door for Collaros to start in Week 20.

“We’ll see tomorrow,” said Head Coach Mike O’Shea. “As always, when they wake up, we’ll see how they fared on the plane ride and what went on during the evening.”

While Collaros needs to be sharp, the Bombers’ bread and butter is on the ground, on both sides of the ball. Harris headlines a rushing attack averaging 148 yards per game, easily the best in the CFL. Winnipeg’s run defence, meanwhile, allows a stunning 64.2 yards per game, the second-lowest total in CFL history behind the 1995 Stampeders (54.5 yards per game).

“We usually stop the run by the end of the first quarter, so they try a different way to get the ball to the running backs through the screen game and draws,” said defensive end Willie Jefferson. “They know they can’t hand it off to him and expect five yards every time they get the ball.”

The Bombers will be without their usual starting centre in Michael Couture. Canadian Cody Speller will replace him on the offensive line.

The weather was a popular topic following Saturday’s walkthrough, as the forecast predicts 10-20 cm of snow overnight and into Sunday afternoon.

5 – Straight playoff home games the Calgary Stampeders have won, including last year’s Western Final against Winnipeg to advance to the Grey Cup.

9 – Interceptions for Winston Rose, the most in the league ahead of Stamps defensive back Tre Roberson who had seven.

15 – Calgary’s turnover ratio of plus-15 leads the CFL, marking the third straight year the Stampeders have held such a distinction.

16 – Pass knockdowns by Willie Jefferson, the most in the league in 2019. Jefferson also led the CFL with six forced fumbles and had a career-high 12 sacks.

18 – The Bombers will make their 18th playoff appearance since 1990, the last time they won the Grey Cup. Their current drought is the longest in the CFL.

1,909 – Combined yards of offence for Andrew Harris, who won the rushing title with 1,380 yards and a career best 6.1 yards per carry.

Kickoff is at 4:30 p.m. ET and can be seen on TSN, RDS and ESPN2, and followed live via CFL.ca Game Tracker. 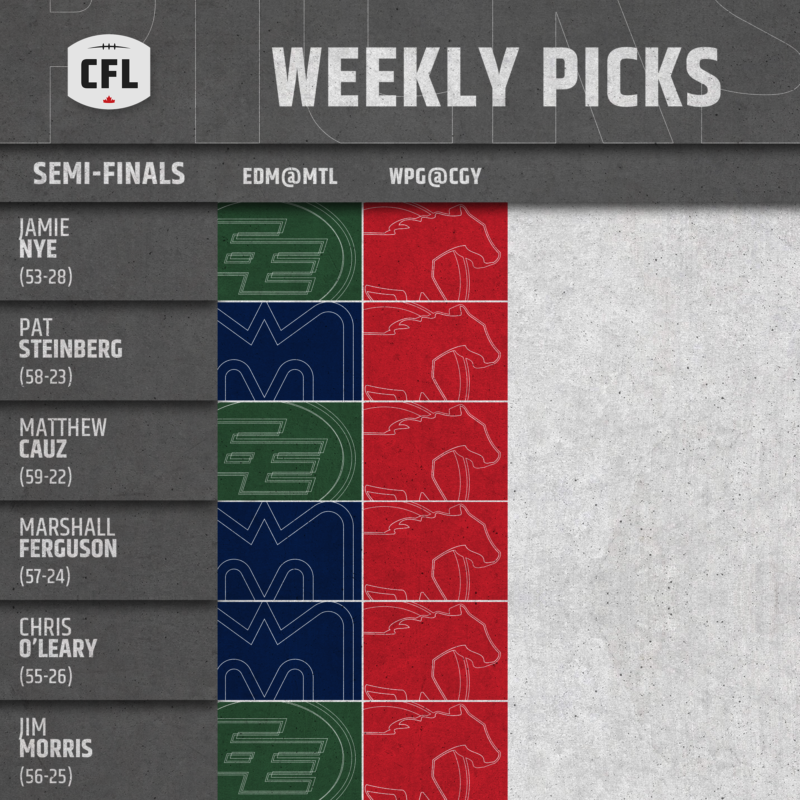