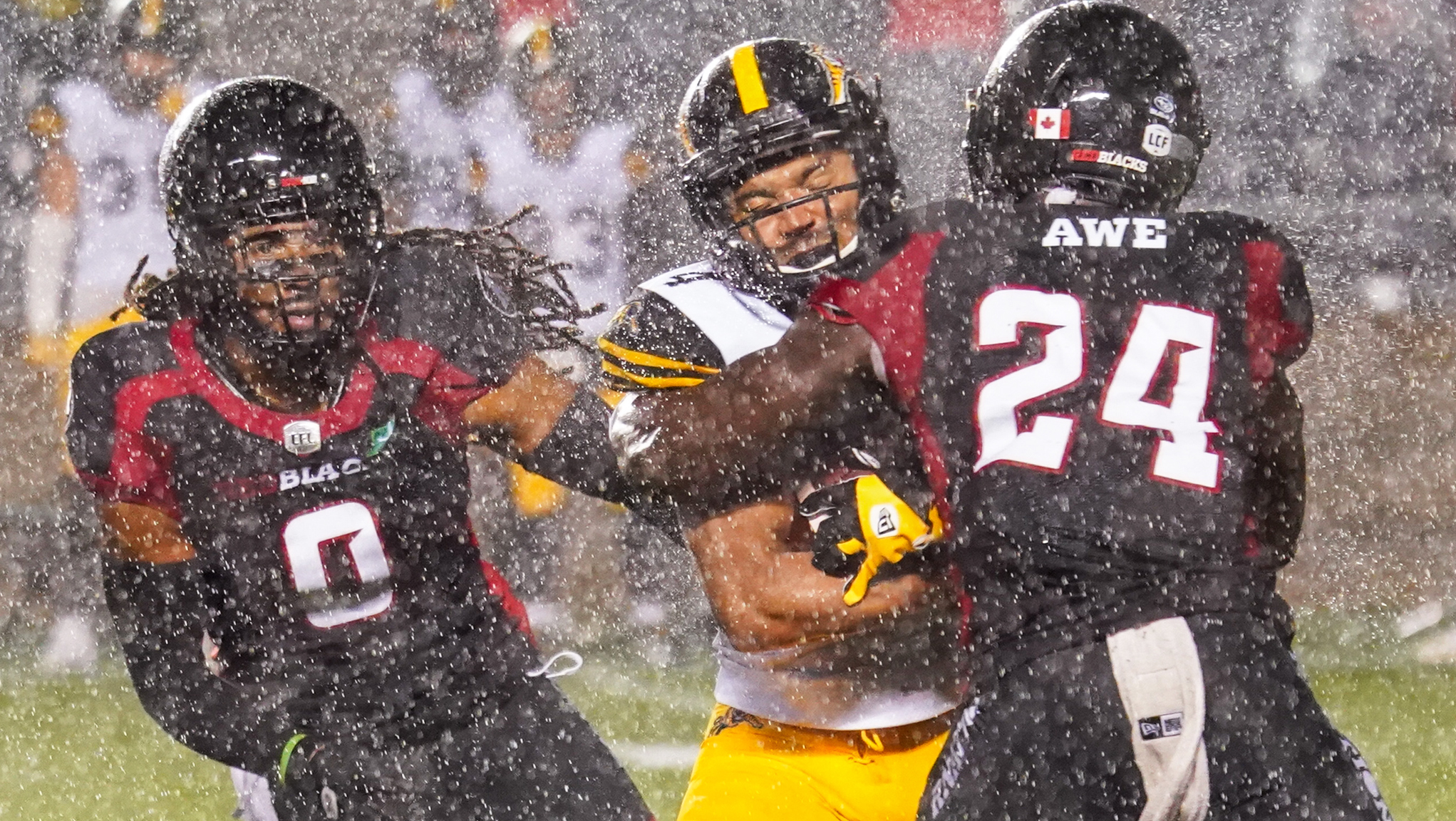 OTTAWA — The Hamilton Tiger-Cats defeated the Ottawa REDBLACKS on Wednesday night thanks to scores from their offence and defence.

The rain was coming down in sheets for the majority of the contest at TD Place, but that didn’t slow down the Ticats from notching their fourth win of the season with a 24-7 victory.

Steven Dunbar scored a touchdown for the Ticats on offence while Jumal Rolle scored on a pick-six on defence in their team’s winning effort. Dunbar finished his night with four catches for 27 yards while Rolle added a tackle on special teams.

Hamilton quarterback David Watford connected on 15 of 25 passes for 115 yards and a touchdown. He also called his own number 11 times for 54 yards. For the REDBLACKS, Dominique Davis completed six of 14 pass attempts for 50 yards and an interception and Matt Nichols was good on seven of his 10 passes for 68 yards.

The REDBLACKS showed some life in the fourth quarter after DeVonte Dedmon scored on a punt return, but it wasn’t enough for the home team to begin a comeback.

RELATED
» Through the Lens: Hamilton at Ottawa
» Boxscore: Ticats, REDBLACKS by the numbers
» Watford: ‘It’s amazing to see the defence ball out like that’

With the rain coming down, the opening quarter began a little slow for both offences. After trading a few punts, the first point of the game came from the Hamilton Tiger-Cats.

Ottawa punted the ball out of their own end zone, putting the Ticats in good field position to start their second possession of the night. Watford moved his team into field goal range but Taylor Bertolet missed his 34-yard attempt, adding a single point on the board for the visitors (1-0).

After the REDBLACKS turned the ball over on downs – Simoni Lawrence stopped Dominique Davis on the short yardage attempt (third and one) – the Ticats attempted their second field goal of the night (52 yards) but it was missed once again.

Bertolet had a third chance to connect on his first field goal of the evening, this one from 39 yards out, and he booted it through the uprights as the first quarter came to a close, adding to Hamilton’s lead (4-0).

On their opening drive of the second quarter, the Ticats found the end zone for the first time of the evening. The 11-yard major score courtesy of Steven Dunbar, along with the convert, extended Hamilton’s lead to 11-0. The drive was aided by a penalty – a 15-yard horse collar penalty called on Ottawa SAM linebacker Don Unamba – and featured a 36-yard catch and run from Jaelon Acklin to get the team into scoring position.

Ottawa’s second turnover of the night was a fumbled Davis handoff to Ryan Davis and Hamilton linebacker Kameron Kelly recovered the football. The Ticats capitalized with a field goal, as Bertolet booted and connected on his 50-yard attempt. That would extend Hamilton’s lead to 14-0.

Hamilton committed their first turnover with two minutes left in the first half, as they turned the ball over on downs following the REDBLACKS defence stuffing Watford’s third down QB sneak attempt. The home team wasn’t able to capitalize, however, as Hamilton’s defence held them to two-and-out.

After the teams traded two-and-outs to begin the second half, Davis and the REDBLACKS were starting to get some momentum, moving down the field. But just when things starting to go in the home team’s favour, Jumal Rolle intercepted Davis and returned it to the house for the pick-six. With the point after, Hamilton extended their lead to 21-0.

On the team’s next drive, it was Matt Nichols under centre for the REDBLACKS taking over for Davis.

In the early part of the fourth quarter, DeVonte Dedmon did what he does best on special teams and returned a punt 63 yards to the house to score the REDBLACKS first points of the ball game. Lewis Ward was good on his convert and Ottawa cut the Ticats lead to 21-7.

That score proved to be a momentum swing, as the REDBLACKS defence held the Ticats to a two-and-out once again on the next possession.

Nichols then started to get into a rhythm when Ottawa got the ball back but an awkward fall saw the REDBLACKS pivot leave the game. On third and one, it was receiver Nate Behar in at QB to try and get the first down. He was unsuccessful and turned the ball over on downs.

With about two minutes left in the game, the Tiger-Cats punted and the ball slipped through Dedmon’s hands and Hamilton recovered, bringing Watford and co. right back on the field. They settled for a field goal as Bertolet connected on his 14-yard attempt, increasing the Ticats’ lead to 24-7.

Behar was behind centre for the REDBLACKS final drive with under a minute to go for a few plays before time ran out.

Next up for the Tiger-Cats is a home game against the Montreal Alouettes on Saturday while the Ottawa REDBLACKS host the Edmonton Elks on Tuesday.