CALGARY —  The Saskatchewan Roughriders snapped their two-game losing streak against the Calgary Stampeders as they came away with a 20-17 win in the final of their three-game regular-season series.

After going into the locker room at halftime down 10-6, the Saskatchewan Roughriders came alive in the second half, outscoring the Stamps 14-7.

Cody Fajardo threw for 222 yards, including a pair of touchdowns in the second half that sparked the Riders’ come-from-behind win.

Of those on the receiving end of those passes was Duke Williams who recorded 48 yards and a crucial onside recovery in his season debut with the Riders.

In Kamar Jorden‘s return to the Stamps’ offence, he recorded 63 yards on the day while Ka’Deem Carey rushed for 62 yards and a touchdown.

On the losing end, Bo Levi Mitchell passed Henry Burris for the Stamps’ All-Time leader in completions as he connected on 69 per cent of his passes for 313 yards, a touchdown and three interceptions.

RELATED
» Craig Dickenson: ‘It was a big one for a lot of reasons’
» Through the Lens: Saskatchewan at Calgary
» Boxscore: Riders at Stamps by the numbers
» Watch: Third interception leads to Riders’ touchdown 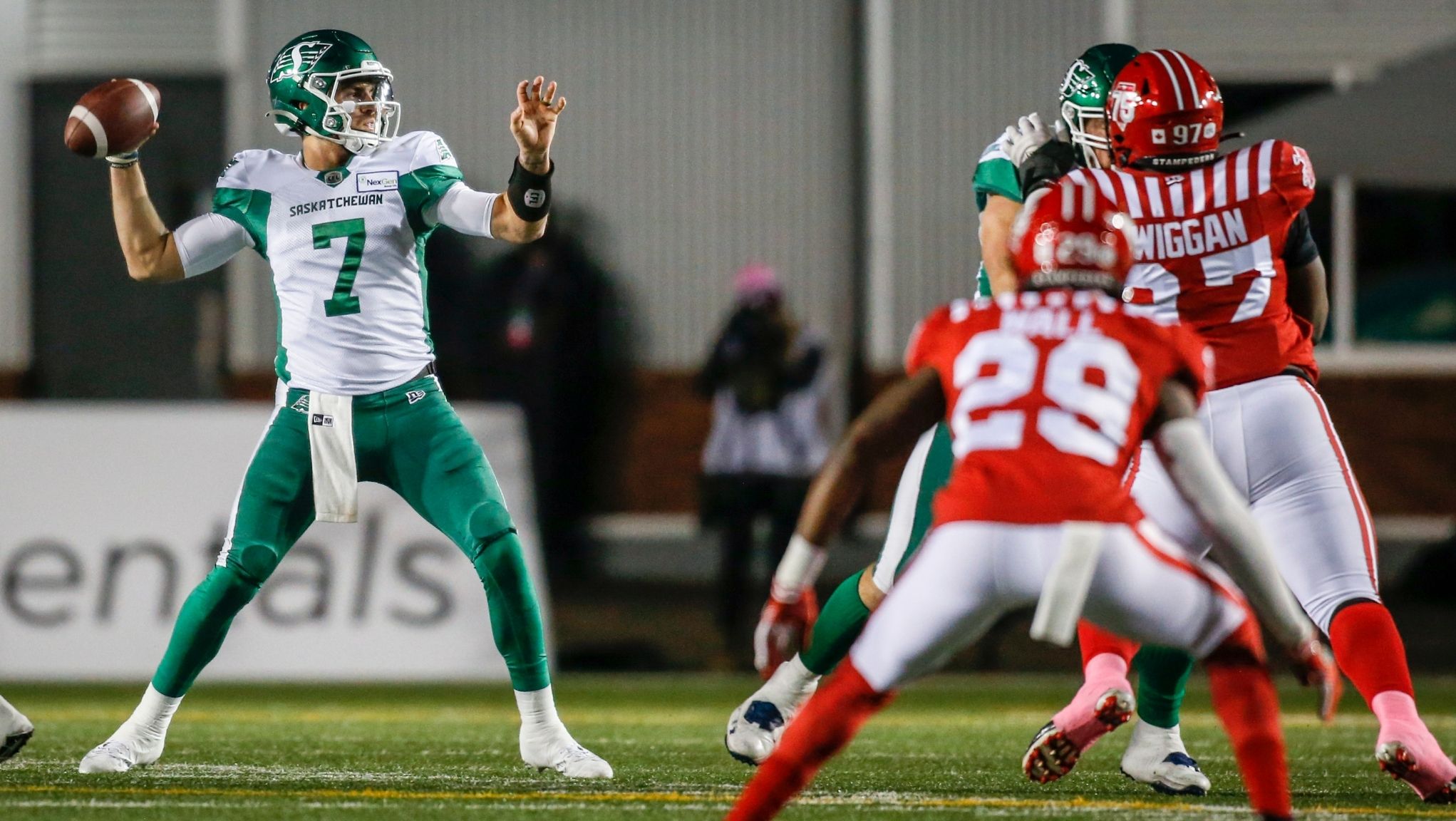 With the addition of Williams and the return of Shaq Evans to the Riders’ offence, they wasted no time taking to the air. In their game-opening drive, Fajardo shared the wealth. He completed a pair of passes to Brayden Lenius and William Powell before the Stamps’ secondary caught on.

With pressure at the feet of Fajardo, an errant pass found the hands of Brandon Dozier whose 20-yard return gave Mitchell and the Stamps’ offence a short field to work with.

Coming out of the huddle, Mitchell, much like Fajardo, carried out an aerial attack.

After connecting on three of his four attempts, the Stamps threatened to score. Mitchell found Ka’Deem Carey alone in the flats on second down charging towards the end zone, but the Riders would corral him short of the goal line. Rene Paredes gave the Stamps the first lead of the game with a 12-yard field goal.

Following a Riders’ punt, Mitchell tossed an interception of his own as trying to connect with a blanketed Kamar Jorden, Jacob Dearborn came up with the ball.

Calgary’s defence would continue to come after Fajardo in the opening frame, forcing fumbles on back-to-back possessions. Fajardo would be ruled down on the second which prompt Brett Lauther‘s game-tying 48-yard field goal.

Following a later miss by Lauther, the Stamps would revert back to the run game that brought them success in their prior meeting with the Riders. On five of their seven plays, the Stamps would find positive yardage with two of them converting third downs as they inched their way down the field.

Carey later broke free for a gain of 13 yards before Mitchell connected on back-to-back passes for 42 yards to Richard Sindani and Jorden to get the Stamps in the red zone. Amidst a pile of Rider defenders and Stamps linemen, Carey reached the ball forward while perched atop the goal-line pile for a Stamps’ touchdown and a 10-3 lead.

Following a 52-yard field goal from Lauther, the Riders would regain possession on the ensuing kickoff as Dearborn forced a fumble.

Facing a chance to dwindle the lead down to a single point, Lauther missed a 44-yard field goal attempt.

Saskatchewan would carry their pass-heavy attack into the third quarter, leaning on the talent of Fajardo to lead them down the field.

After Fajardo connected with Kian Schaffer-Baker for a 22-yard reception who tore up the sideline for an additional 12 yards, the Riders were in a position to take their first lead of the game. They would do exactly on the next play with Fajardo throwing an end-zone strike into a tight window to Lenius. Lauther’s successful point-after-try put the Riders up 13-10.

Looking to respond, Mitchell would be picked off for the second time on the night as Damon Webb leaped up for a pass intended for Malik Henry.

On the final play of the third quarter, Mitchell would be picked off for the third time. This time it was Jeremy Clark who came down with the ball, running it back the other way for a 69-yard swing.

Two unsuccessful attempts at the endzone resulted in the Riders opting to go for it on a third-and-goal. Rolling outside the pocket to his right, Fajardo found Kyran Moore in the end zone to extend their lead.

With the clock against them late in the fourth, Calgary looked for a spark. In connecting with Shawn Bane, the Stamps would find one as his 44-yard reception got them into Riders’ territory. Sindani would give the Stamps life with a four-yard touchdown reception from Mitchell, making it a three-point game.

Williams would seal the Riders’ first win over the Stamps since 2018 with an onside kick recovery.

Next up for the Riders will be a trip out East to take on the Montreal Alouettes on Saturday at 7:00 p.m. ET. Calgary will look to rebound in Ottawa against the REDLACKS at 7:00 p.m. ET on Friday Night Football.